‘What If…?’ episode 1 review: Captain Carter is a real knockout

‘What If…?’ episode 1 review: Captain Carter is a real knockout

The idea behind What If…? is simple, yet infinitely imaginative—and I mean that in the most literal sense possible.

Now that we’ve been officially introduced to the multiverse thanks to Loki‘s season 1 finale, there are innumerable realities to explore. And this series promises to show us what exactly is out there.

Narrated by The Watcher, we get to explore these realities one story at a time. As our guide tells us, just a single decision can change the entire course of history. The universe we’re familiar with isn’t the only one—nor is it necessarily the best.

Though I would love to see What If…? as a live-action series, the animated style of the show provides more opportunity to let our collective imagination run wild. The possibilities are as limitless as the ideas.

Thankfully, there’s already a second season in the works, because I’ll be happy to watch this series for as long as Marvel wants to make it. 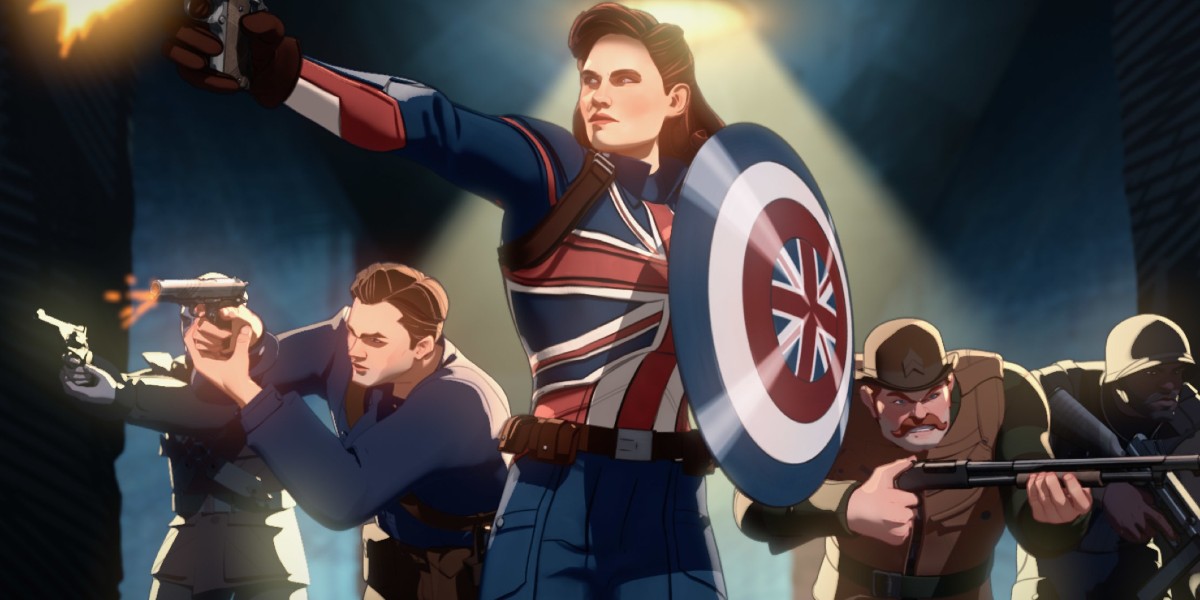 As The Watcher explains, a single choice can branch out into infinite possibilities. His job is to observe, not to interfere or guide. There’s definitely a Twilight Zone vibe to both the setup and the style of narration, and I’m here for it.

In this episode, the single decision is the fact that Peggy decides to stay in the room when Steve is about to undergo his treatment to become a super soldier. As a result, he’s shot, and Peggy is the only one willing and capable of going into the machine.

In an act of defiance against her superior, who tells him not to press the button, Howard turns peggy into Captain Carter. This What If…? episode 1 review was one of the main ones I was looking forward to writing, and the episode did not disappoint.

When Peggy emerges, she’s taller and bulkier—just like Steve was in our reality. I’m glad they didn’t shy away from turning her into that kind of super soldier just because she’s a woman. They also kept her fighting style, which is more like a bar brawler than a lithe assassin as many female characters are often depicted in this universe.

Another aspect of Peggy they didn’t shy away from was her anger. They reference the scene where Steve gets so mad he knocks a punching bag right off the hook. Peggy also throws weights at the wall and watches as they embed themselves into the wood.

She has a right to be mad—no one wants her to fight because she’s a women, despite the fact that she’s more capable than any of them (and not just because she’s a super soldier, mind you). You can feel her frustration at getting sidelined even when they all know she’s the greatest weapon they have. 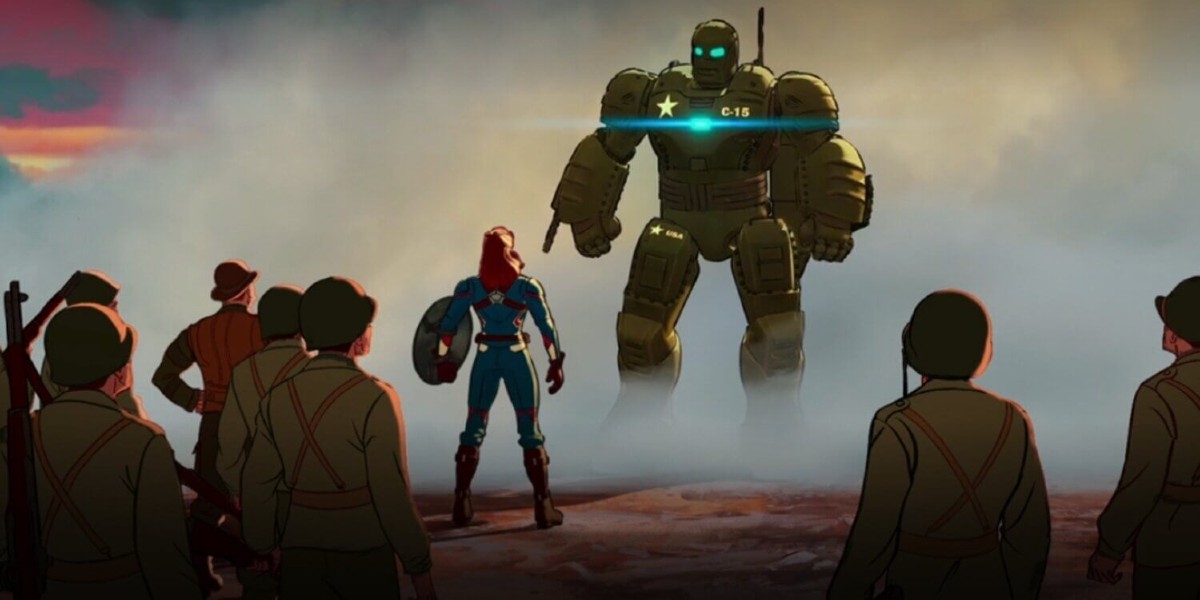 Peggy was never one to sit out of a fight if she could help it, and so she takes matters into her own hands. Stark designs her superhero suit and gives her a shield—both of which sport the Union Jack. And just like that, Captain Carter is born.

The animators give her plenty of hero shots, and I’d do them a disservice in this What If…? episode 1 review if I didn’t mention the fantastic fighting choreography. There are several long, drawn out scenes where Peggy gets to wipe the floor with her adversaries. And you know she’s taking extra pleasure from surprising her opponents and proving her superiors wrong.

And dare I say, she seems to be particularly efficient at her job. I’m not saying she’s better than Steve at the whole Captain business, but she does avoid several outcomes thanks to her proficiency. For example, she saves Bucky without a problem, and he never becomes the Winter Soldier.

As such, there are some stark differences in this reality. Since Steve didn’t become Captain America, Howard outfitted him into an iron suit—and yes, it looks very much like Mark 1 from the first Iron Man movie, though his moniker is Hydra Stomper.

This was particularly fun to witness because of Steve and Tony’s interactions from our universe—where Steve had previously asked Tony what he amounted to without his suit, Peggy gets to tell this Steve that he’s more than just this metal contraption. It takes a strong person to put it on and charge into battle. 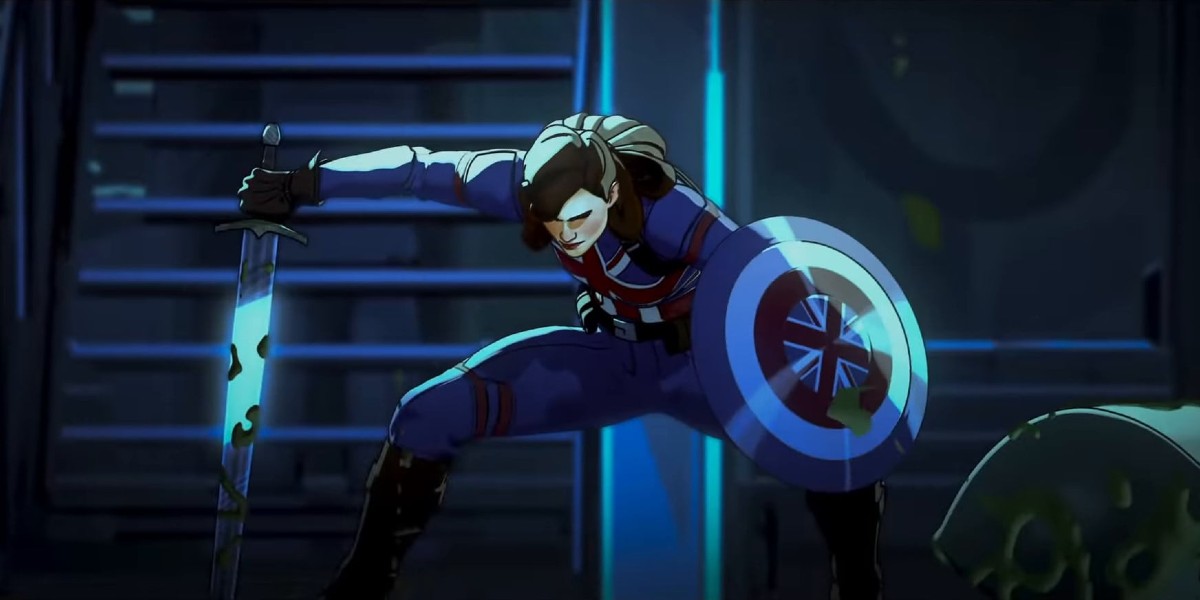 But as foreign as this reality is to us, there are some staples to the story. For one, Peggy and Steve still have an undeniable connection. They both know what it feels like to be ignored, and even though Peggy is the one in the limelight this time around, their shared bond leads to romance.

Well, it would have if Howard had even an ounce of tact.

And that’s another aspect of this episode I want to include in this What If…? episode 1 review—the humor. The First Avenger certainly had some comedic bits, but Captain Carter seems bouncier and quippier than her predecessor. Peggy’s always been a firecracker, and I’m glad she stayed that way for this series.

When Steve is blown up with the train, Schmidt comes into possession of the Tesseract. He uses it to open a portal, and a creature with tentacles attempts to come through. In a hilarious turn of events, the beastie’s first move is to crush Red Skull into oblivian.

Peggy and Steve trade off at saving each other until she makes the ultimate sacrifice. While she doesn’t go out the same way our Steve did, it shows that these two have a shared heart. They know the fight is bigger than any one individual, and so when she decides to push the monster back through the portal, they both recognize it’s a one-way street.

But just like in our universe, you can’t keep the Captain down for long. When Fury and Hawkeye use the Tesseract 70 years later, they’re not met with Loki, as in our reality. Instead, Captain Carter steps from the portal, grateful they won the war but devastated that so much time has passed.