‘Superman and Lois’ season 1, episode 14 review: The heart of Smallville

Superman and Lois season 1, episode 14 is about the truth getting out.

On Superman and Lois season 1, episode 14, Morgan Edge (or The Eradicator) begins his assault on Metropolis with Leslie Larr. Meanwhile, Lana and Kyle doubt their decision to leave Smallville, as Sarah lashes out at them.

Superman and Lois season 1, episode 14 begins three weeks after Morgan Edge’s escape from custody, as nobody knows whether he remains a threat and when he’ll strike.

But given General Lane keeping this information privileged, the citizens of Smallville are on the brink of losing it as they await answers over what’s going on and why the Department of Defense is still taking up space in town. 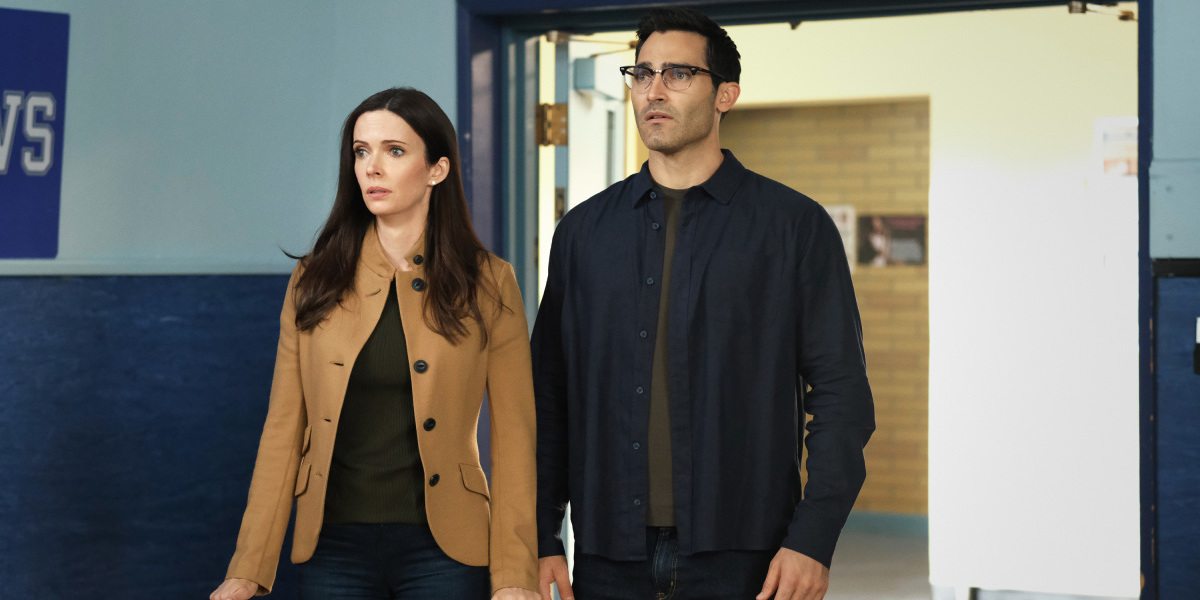 Well, the main storyline with Clark, Lois, and Morgan Edge is interesting on Superman and Lois season 1, episode 14. The others (Jon and Jordan’s high school fun and Lana and Kyle’s potential move)… not so much, especially due to this being the season’s penultimate episode. The episodes of late have felt like a combination of two separate shows, and not in a good way.

One half is the comic book aspect with Clark and Lois, as the duo and their stories continue to be the most enthralling aspect of the show. The other half is the small town teen drama from ABC Family with Lana and Kyle being ostracized and the teenagers’ love lives and high school troubles.

Maybe it’s just me, but it’s not coming together as well as it did earlier this season. Too much is going on with big villains like Morgan Edge and Leslie Larr, who aren’t being properly developed and whose stories feel incredibly rushed in order to leave room for Jordan and Sarah’s annoying will-they-or-won’t-they stuff.

Overall, Superman and Lois season 1, episode 14 is a decent episode. It has flaws, but is still an interesting outing. The worst part was the wait after episode 13, as it’s really hard to get invested in what’s going on when we have another multi-week hiatus every few episodes. The next season needs some better scheduling and to be further along in filming before the premiere in order to avoid this. 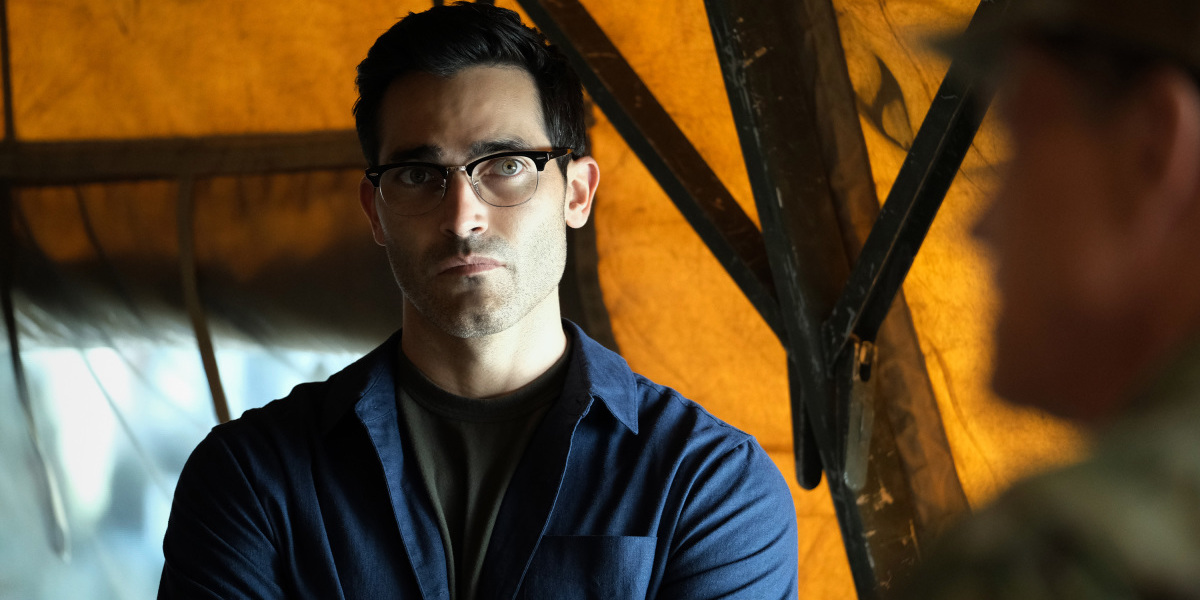 Seriously, weren’t Kara and Clark supposed to be the last living Kryptonians in the universe? Instead, Supergirl has revealed that not only are both of Kara’s parents alive, but a whole part of Krypton survived the destruction. Meanwhile, there are dozens of Kryptonians trapped in X-Kryptonite (or whatever it is), just waiting for a body to inhabit. Why can’t they just be the last two, ever?

Anyway, it’s interesting to see Edge and Larr return for another showdown… but how many is this now? How many “final battles” is too many (because I think we’ve gotten to that point)? This story had so much potential, but is kind of falling flat. It’s just wonderful to see Clark in action, as Tyler Hoechlin is proving himself a marvelous Superman with every episode, and the partnership with John Henry Irons is intriguing.

At this point, I’m kind of just waiting for the Edge story to be over. We know it’s going to end, but not before some consequences hit our hero. However, I’m still just wishing that Leslie Larr would have taken over as the Big Bad after Edge was taken in by General Lane a couple of episodes ago. 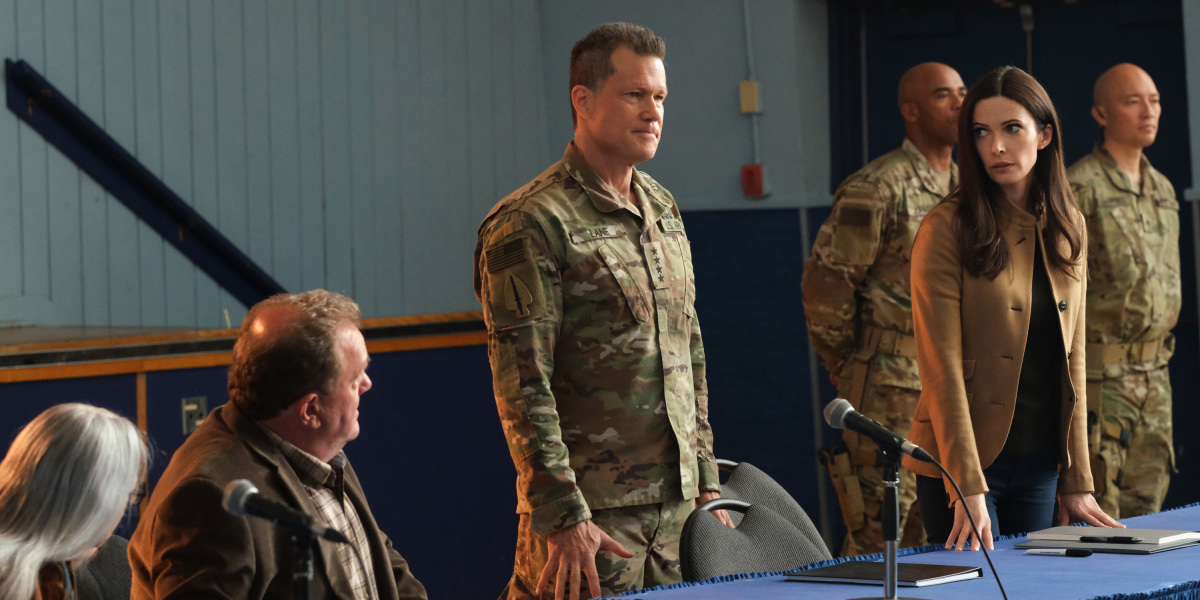 There’s so much potential there with her, and she could have carried out this story herself with a much better motivation driving her actions… but of course she was relegated to sidekick status only.

It’s kind of sad that this story is falling flat with a shortened season, as it’s usually the higher episode count responsible. The writers tried to do too much too fast, which makes everything seem duller. The episode where Edge was captured felt like a more satisfying finale than I’m sure what’s in store will feel like.

But with a 15-episode count and such a flop Big Bad, which is partly due to them changing the character of Lex Luthor to John Henry Irons at the last minute I’m sure, can we really trust that future seasons will be able to tell a compelling story? It’s certainly worrisome. 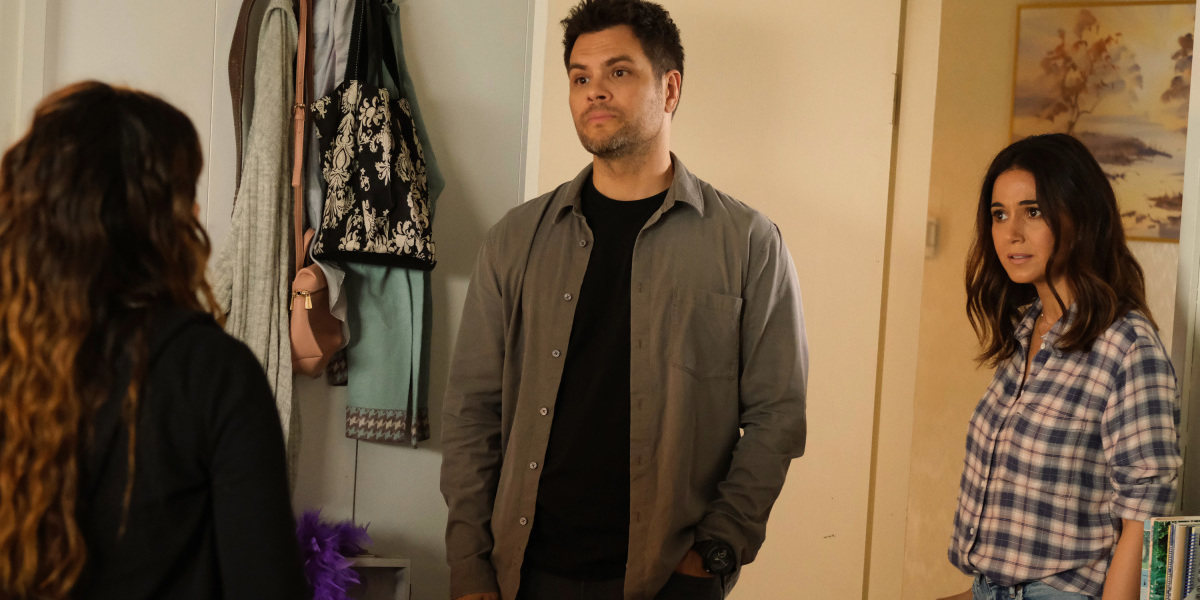 Lana has been a surprise favorite of mine, so even though her story with Kyle on Superman and Lois season 1, episode 14 is a little lackluster, it’s nice to see Lana’s view of Smallville and the people she’s grown up with developed.

The very enjoyable scene between Clark and Lana delivered a lot of potential for this friendship, something that should certainly be explored further if we’re to believe that Lana is his “best friend” now. Lana is the “heart of Smallville” apparently, so fingers crossed we actually get to see this next season with a bit more of a tie to whatever the big story going down is.

Lana’s story has felt so isolated and separated from Clark and Lois aside from those few episodes where she was working with Edge, which needs to be rectified. This show isn’t titled after Smallville; it’s Superman and Lois, so the characters that are part of the show should actually interact with the titular characters more often… except Kyle, he doesn’t deserve to be near Clark and Lois. (Maybe he can move to the other town without his family, so we can be rid of him?) 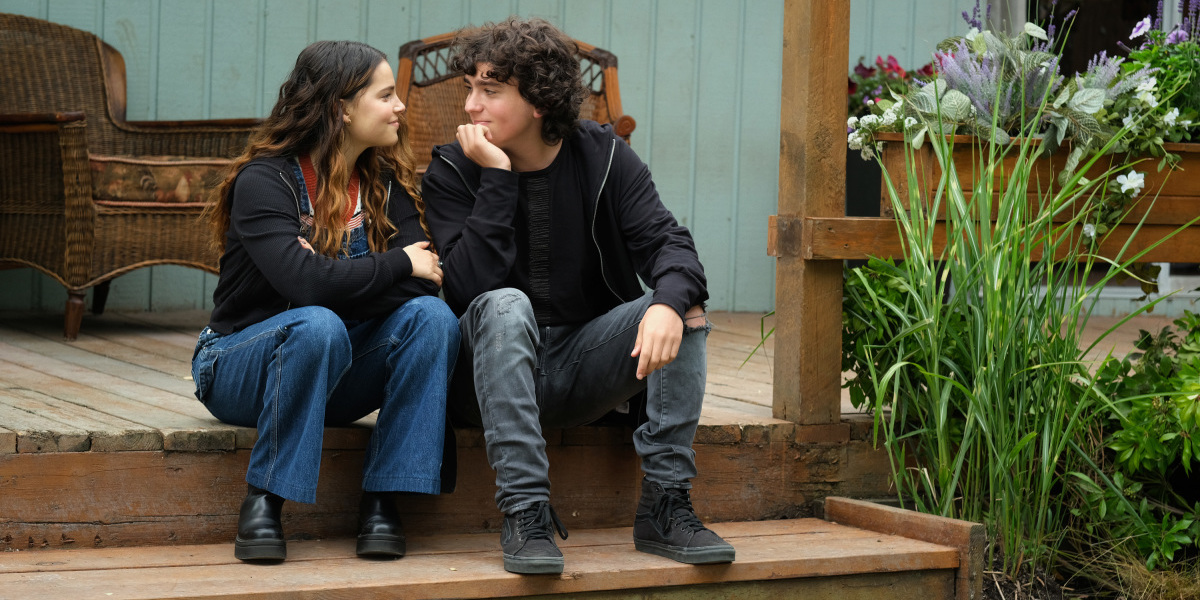 While the town of Smallville falls apart, Jon and Jordan are spending their time with the girls in their lives on Superman and Lois season 1, episode 14. Jordan and Sarah’s relationship is progressing, including a big confession, while Jon and Tegan are bonding (for real this time).

Honestly, the teenagers are the weakest aspect of the show. While Lois and Clark are juggling crisis after crisis, the boys are off going to parties, kissing girls, and other teen drama nonsense. All of the stuff with Sarah and her parents is unnecessary, too. As I wrote before, it feels like a separate show and is really dragging everything else down when so much feels like it could be stripped away and the episodes would have been better.

Lois and Clark as parents is great, Bitsie Tulloch and Hoechlin play it wonderfully with Jordan Elsass and Alex Garfin. There’s no doubt about that. But when the teenagers go off on their own, it’s yawn-inducing. The show needs to scale back on how much time on-screen the boys are getting when they’re not with the parents next season, as it would be perfectly fine — preferable, even — just watching Lois and Clark alone.

What saved the episode from feeling like any attention on Jon and Jordan was a waste was the moment with Lois on the rooftop, almost dying in the same way as her counterpart from John Henry Irons’ Earth. What a shocking, yet beautiful moment to see Irons save Lois in the way he could not before, and to see the boys understand what they were watching. That certainly could be game-changer for their relationship with their mom.

Plus, Jordan being kidnapped by Edge and overtaken by a Kryptonian is going to be brutal for Clark and Lois on the finale. That was such an unexpected ending, and could lead to such a dramatic change in Jordan’s behavior next season. (Hopefully he’s a little more bearable.) 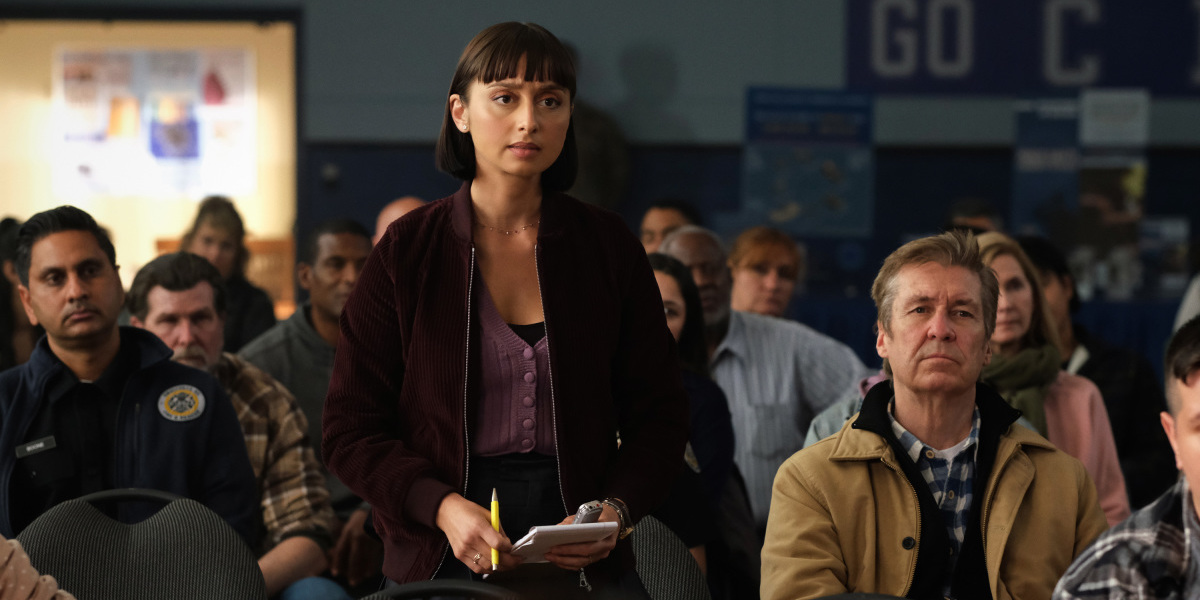 One thing is certain after Superman and Lois season 1, episode 14: More of the show needs to focus on Clark and Lois. Two separate storylines that hardly, if at all, involve them is too much, and those two are the most compelling reason to watch right now. Clark needs to find a better purpose in Smallville, which certainly seems possible considering how things are falling apart.

Meanwhile, Lois’ time at the Smallville Gazette with Chrissy needs to be amped up. Chrissy is proving herself a very competent journalist and character, standing up to General Lane in a way that nobody else has been able to, really. She’s like Lois in so many ways, but isn’t held back by the relationships that Lois is, making her an interesting frenemy for Lois to have.

What would Chrissy do if she found out that Clark was Superman, for instance? Can Lois really befriend Chrissy with all of the secrets she’s forced to keep? Let’s see it!

The show has such immense potential, but it just feels like things kind of fell apart at the end of writing this season. So many things are just not working how the writers intended, and it’s disappointing to see the story with Edge that has been the focus since so early on falling apart with so many unnecessary twists and turns. This could be better.

The Superman and Lois season 1 finale airs Tuesday, August 17 at 9 p.m. ET on The CW!