The Magicians 4×05 gave us Queliot and dove headlong into the idea of the mind as both a prison and a safe haven.

Thanks to The Magicians 4×05 titled “Escape from the Happy Place,” we now know Real Eliot is still alive and we got to check in with Alice, Quentin, and Margo, who are all dealing with some serious stuff.

It took four episodes but we finally know where the real Eliot is and what Monster Eliot did with him — trapped him in a place where he can relive his best memories and avoid the real world. My guess is that trick’s worked with other people The Monster At The End Of The World has possessed because let’s face it, it would be tempting to stay there. After all, getting to pick and choose your own memory adventure and avoid the negative moments along the way is one hell of an escape.

In the case of Eliot Waugh, however, The Magicians 4×05, “Escape from the Happy Place” is a reminder of just how much growth the character has gone through. Season 1 Eliot would likely have stayed and never questioned his reality. But Season 4 Eliot not only figures out what’s going on but is willing to face his darkest moments to find a way out.

Lucky for Eliot, he has a guide: Charlton (Spencer Daniels). Also known as the last guy who hosted TMATEOTW. I’ll admit to not knowing how he’s taking up space in Eliot’s noggin. I mean, the running theory is that if you kill the body of whoever The Monster’s inhabiting, you kill that person right along with the Monster. But The Monster’s not known for playing fair or telling the truth, so maybe that’s just another thing he says to keep people from killing him.

Whether it’s a fluke or whether the last host generally makes the jump to the new host, Charlton’s here to… help. 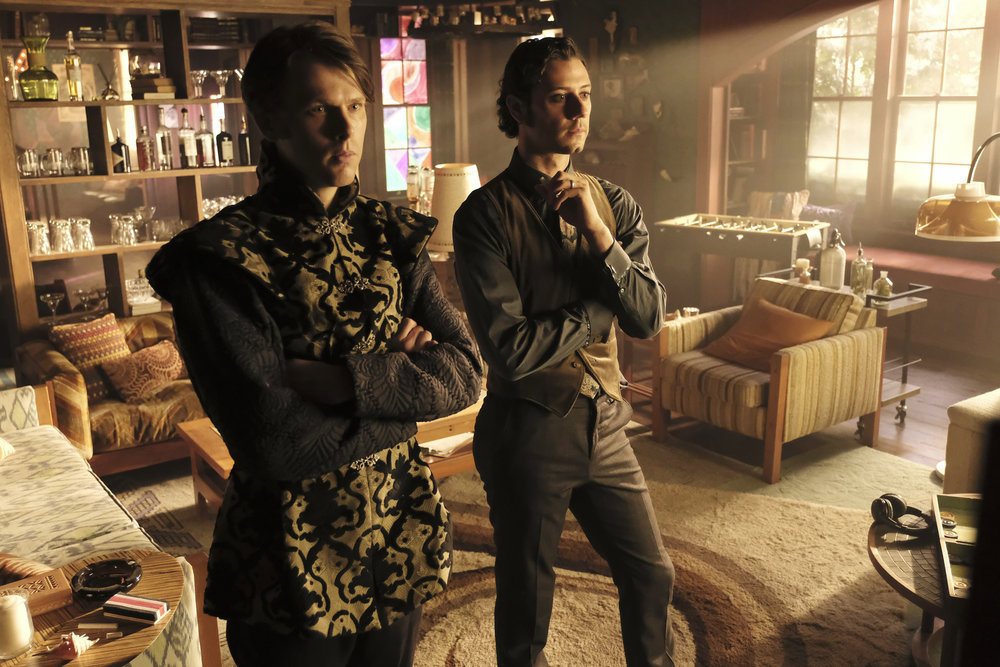 This is where I send another bit of love to all The Magicians writers for making Charlton some comic relief in all this. Especially when it comes to the running gag about the usage of the word “fuck”. Eliot’s facing some really terrible shit and it would be easy to get all bogged down in the drama of that, but Charlton’s almost childlike innocence smooths out the rough edges to a degree. Love the Lost reference.

Once Eliot figures out how he can get word to his friends that he’s alive in there, he heads down Traumatic Memory Lane. This is like a fucked up Wizard of Oz.

Eliot goes through some pretty messed up memories and it’s plain to see why he hid them from himself. Using magic to kill a bully with a school bus, and Eliot himself bullying his only and best friend Taylor, are just the tip of the iceberg.

But we also see him learning the rules of the Happy Place and using his memories of other people in his life to help him navigate the dangers and creatures intent on stopping him.

Not only is it a great way to let (our) Eliot interact with the cast, but we watch him take a mental inventory of all the things he thinks he’s done wrong in his life. Welters Captain Margo is a personal favorite.

A Life In The Day – Queliot shippers rejoice! 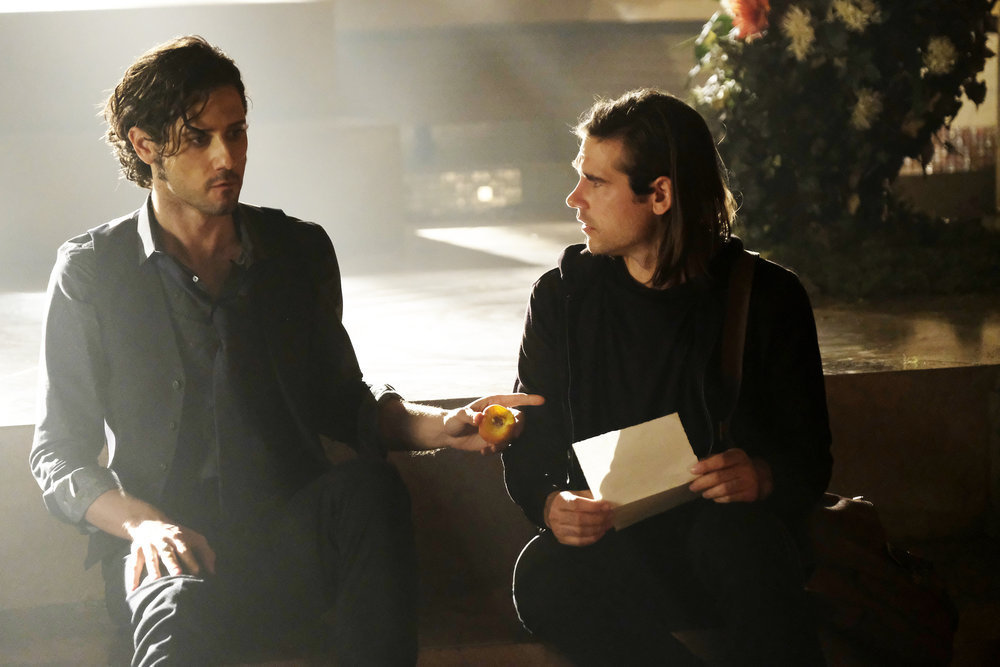 “If I ever get out of here, Q, know that when I’m braver it’s ’cause I learned it from you.”

Of course, the real payoff to all the soul searching is the deepest regret: The discussion between him and Quentin that we didn’t get to hear in episode 3×05 “A Life In The Day”. Once we hear it, it’s plain to see why it’s so hard for him to face.

“Think about it. We work. We know it ’cause we lived it. Who gets that kind of proof of concept?”, Quentin says, and the hope all over his face is palpable. Quentin Coldwater remembers 50 years of a love affair in which he felt loved and happy and content. With Eliot. And he puts himself out there in a big way.

Eliot’s disappointment with himself as he watches the memory of him basically killing that hope is just as palpable. But he has a do-over most people would kill for. He gets to talk to himself in that moment and, in essence, set himself straight.

Eliot now gets to apologize to Quentin and give him the kiss he was too afraid to give at the time.

And that’s the key to finding the door. The door he then walks through to show he’s still alive in there and, wouldn’t you know it, Q sees Real Eliot in Monster Eliot and saves him. How’s that for synchronicity? 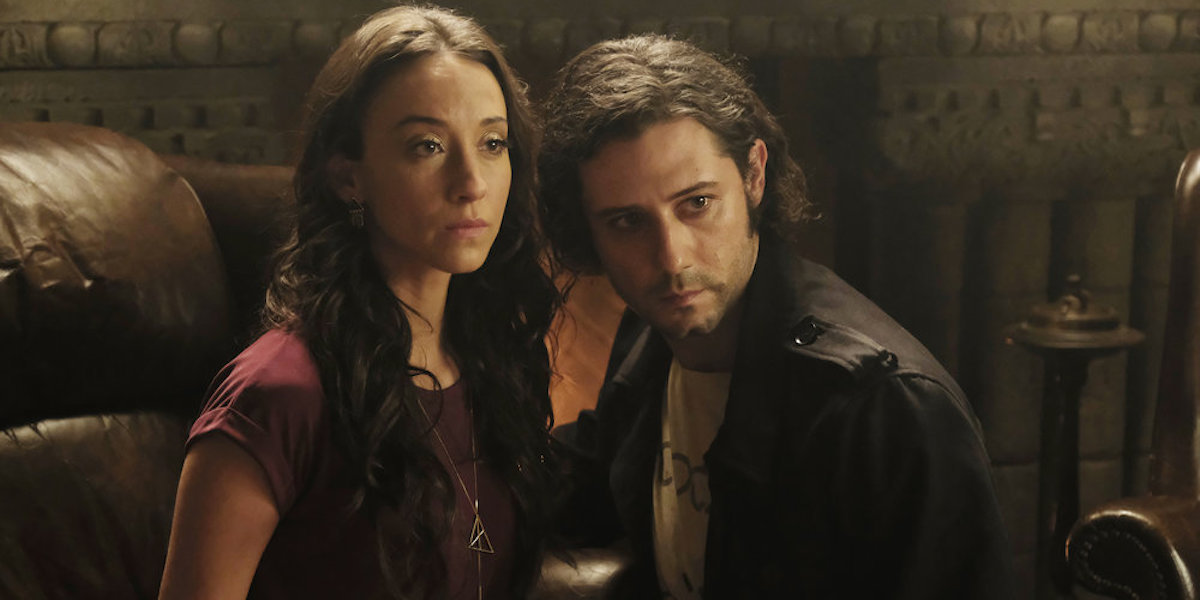 If I were Julia, I’d be looking for my own Happy Place, but here she is dealing with everything. Shoshanna (Jolene Purdy) sacrificed herself to save her, Iris (Madisen Beaty) called Julia a powerless god and a useless human and then threatened to kill them all if they don’t trap The Monster back in Blackspire. Lucky for us, The Monster kills her in a bit of serendipity aka the gang figured out Eliot was still in there somewhere and Alice, Quentin, and Julia managed to convince him everything was a trick to hand over Iris. So Iris 0, Magicians 1.

But here’s the real kicker: The only way our Magicians can save themselves in the aftermath is to hand The Monster a key to building himself a body.

Julia sacrifices something to save everyone (like she does). But did she just hand over the equivalent of a nuclear bomb? We’ll see.

Once again, Margo’s left in a position to feel all the feelings and not be able to express them while everyone else falls apart around her. Everyone’s losing it and there’s Margo, just handling things. Even when her Birthright Box ends up containing a non-talking talking lizard.

Eliot’s gone. Fillory’s a mess. Her friends are in trouble, and there’s Margo Hanson holding on to her shit like her life depends on it. Because, in a sense, it does.

“I can’t cry out all the sadness… ever. Because if I start, I’ll never stop. Understand? I’ll be useless forever.”

Sometimes Margo is so damn relatable it hurts. 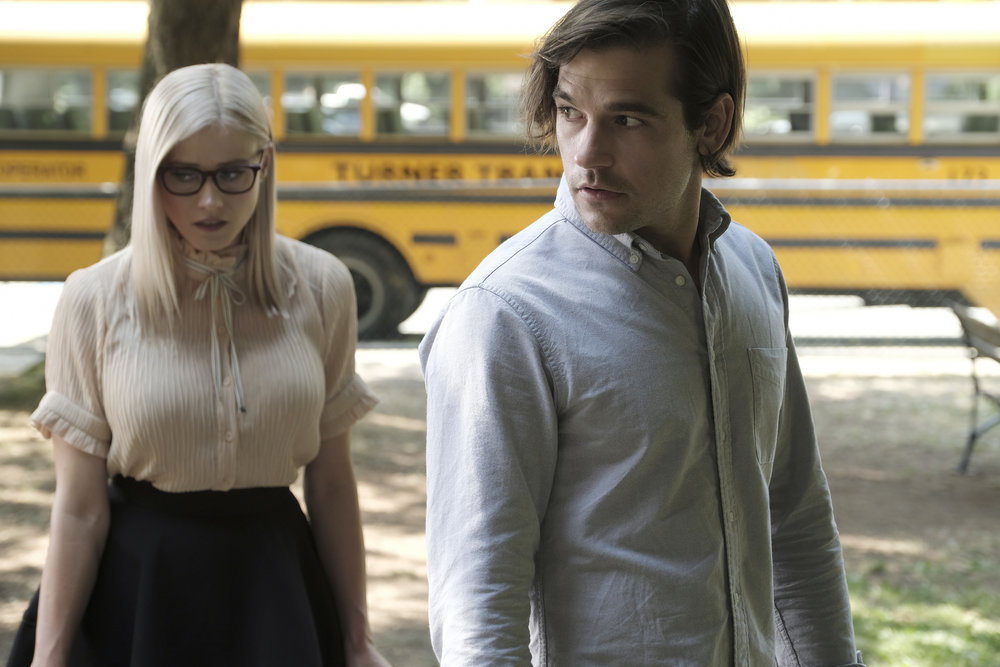 Talk about a woman on a mission. Alice accepts Plover’s help in a Devil’s bargain but sends him to the poisoned planet at the last minute. There’s a question here about what’s right, what’s wrong, and what’s allowable. Sure, she betrayed Plover but he was a child molester. In the end, isn’t trying to help her friends a noble goal?

Of course, she’s also done a lot of things in the name of what she thought was best that turned out to be, well, not the best.

Even after she saves Quentin, he really doesn’t trust her. She’s really trying to help. Trust be damned. She even promises that if he lets her help, she’ll use the book to figure out where she’s supposed to go and she promises she’ll go wherever it says.

Of course, once she saves Quentin, she wants to stay and help. But Quentin’s not having it. He’s helped her with the spell. I wonder where the book will tell her to go? And will she actually go?

That sounded like a pretty final goodbye from Quentin. We’ll see what happens.

A couple of quick comments/questions:

This episode wrecked me. It was brave AF. It didn’t flinch. It takes on the biggest demons and pain anyone can face — the ones we create ourselves.

I’ll see you all next week. I’m gonna go cry now. Love ya.