We use cookies to ensure that we give you the best experience on Hypable. If you continue to visit us, we will assume that you are happy with it.
10:00 am EDT, October 15, 2019

‘What Makes Us’ book review: A timely story of prejudice and the search for identity

Seventeen-year-old Eran Sharon has a hard time sitting idly by when he’s surrounded by social injustice, both in his community as well as the whole of the United States. Though he’s still a high schooler, he stages a protest against a new proposed law giving Houston police the ability to increase traffic stops, similar to previous “Stop and Frisk” laws that have popped up across the country.

But what begins as the idea of a small, peaceful protest turns into something much larger than Eran and his high school friends could’ve expected. After media attention attracts hoards of counter-protesters, in addition to fellow protesters, a heated moment results in a national news incident.

When a local Houston reporter connects Eran and his mother to a terrorist attack in New York City 15 years earlier, the father Eran never knew (or knew anything about) suddenly threatens to define his life. As Eran faces the consequences, not only of his actions at his rally but also those of his father, he must come to terms with a past he never knew about and decide just how much of that past should define who he is and who he will be in the future.

At times, Rafi Mittlefehldt’s What Makes Us can be a tough read as it confronts racism, current hot-button social issues, and questions of identity head on. Not only that, but the novel’s arguments and opinions are unwavering and without restraint.

These positions on current events and instances of thinly-veiled racism in the world are verbalized by Eran in scenes such as classroom discussions or lunchtime conversations between friends. They can feel a bit clunky and heavy-handed in the moment, especially while they’re so heavily emphasized in the first sixty pages or so of this novel, but provide a crucial understanding not only of Eran and his anger, but also just how historically dismissive reactions to social justice issues and tactics have been in the past.

While What Makes Us by no means forces an agenda or specific viewpoint upon the reader, demanding we adopt it as our own without question, it does a great job of providing counterarguments to every point that’s made. For instance, there’s an exchange toward the beginning of the novel where Eran mentions how, because he’s Israeli, others assume he’s automatically in favor of every political move and stance Israel makes. His reply? Pointing out that the person is American and asking if they agree with everything America does all the time.

It’s simple exchanges like these, though obvious in function, that make this one of the most refreshing contemporary reads about current issues. What Makes Us expertly straddles the line of acknowledging grey areas in beliefs and schools of thought pertaining to protest without compromising any of its core values or watering down its messages.

Leading the charge in trying to educate the citizens of Houston (as well as us, the readers) is the book’s protagonist, Eran Sharon. Eran is a passionate young man who’s filled with the fire and drive to stand up for what he believes is right, especially in cases where that’s no easy feat. To him, those who sit idly by and do nothing are almost as bad as those who oppose his views. But instead of writing them off, he takes every opportunity he can to convey his stances and inform the naive of the injustices going on in the world around them.

Eran Sharon is one of the most frustrating characters I’ve ever had the pleasure of reading, but in the best way possible. He’s a young man who’s understandably frustrated and angry, but it hurts to see him that way all the time. That’s his baseline.

Not only that, but he also has an almost complete lack of self-control, which is a dangerous companion to anger issues. He feels most alive and at peace with himself when he’s on the precipice between doing nothing and doing something he knows he’ll regret later. And so he allows his drive for equality to fuel him, seeking both that sort of high as well as the opportunity to effect a change.

But Eran is so much more than his anger and ideals. He’s an incredibly intelligent young man, constantly seeking to expand his knowledge and challenge himself. Eran is also a good friend who cares deeply about those around him and allows himself to be vulnerable, even to the friends he doesn’t know all that well yet.

This is perhaps the personality trait that I liked most about Eran. He may be stubborn and set in his opinions, but he’s not quite hardened to the world. Even when numerous people in his community turn their backs on him and treat him like a dangerous landmine they should’ve seen among them all along, he doesn’t write everyone off.

He also isn’t afraid to show others exactly how he’s feeling. Perhaps that goes back to his lack of self-control, but the best scenes in the novel are the ones where Eran opens up to his friends about how his situation makes him feel. He’s not just some hardcore social justice fighter; Eran has a stake in what he’s fighting for and doesn’t hesitate to express that to others. These moments of vulnerability, not his speeches on right vs. wrong, are what make him a really compelling character.

While the majority of What Makes Us is told through Eran’s eyes, the book spends quite a bit of time exploring Devorah’s perspective and past. A Middle Eastern immigrant whose husband was responsible for a terrible tragedy, Devorah epitomizes strength in the face of adversity.

Out of everyone in the novel, she was honestly my favorite. She’s quiet, yet a force of nature. Short and concise in the way she speaks and interacts with others, but loving and deeply protective of her son (even when he doesn’t understand why). Though Eran may be the novel’s main focus, Devorah is the true scene-stealer, demanding attention and empathy even in moments where she’s not physically present.

Though What Makes Us‘s contemplations and discussions of the act of protesting, as well as social justice, are incredibly thorough and thought-provoking, the real heart of this novel is its rumination on identity and whether or not you have a say in how much your past can affect who you are as well as who you want to be.

Discussions of fate vs. free will as well as nature vs. nurture have long been a part of our culture, but this novel takes those sorts of questions a step further asking to what extent a person’s being is determined by their family history. Eran’s journey through discovering who his father was and deciding just how much of that defines who he is as a person is fascinating to watch because the two are, in a lot of ways, undeniably similar.

As readers, we’re confronted with our own biases. Author Rafi Mittlefehldt sleverly positions us to struggle along with Eran as he grapples with his identity. In post-rage moments where Eran questions his potential for evil or doubts his mother’s innocence, we as readers are asked the same questions about Eran. It’s a fascinating study into what events in a person’s life (or their parents’) define them, both in their own eyes as well as the eyes of others.

Rafi Mittlefehldt’s What Makes Us is a timely and commanding novel that shines a light on unyielding prejudices and calls for a greater compassion for people whose lives are different from our own. Though the bluntness and truths of the opinions expressed by the novel’s main character may make this uncomfortable to read at times, it’s an important story to sit with. Its discussions of social obligation and identity will stick with you long after you’ve turned the final page.

What Makes Us by Rafi Mittlefehldt is available now from Amazon, Barnes & Noble, and your local independent bookstore. Also, don’t forget to add it to your Goodreads “to read” list! 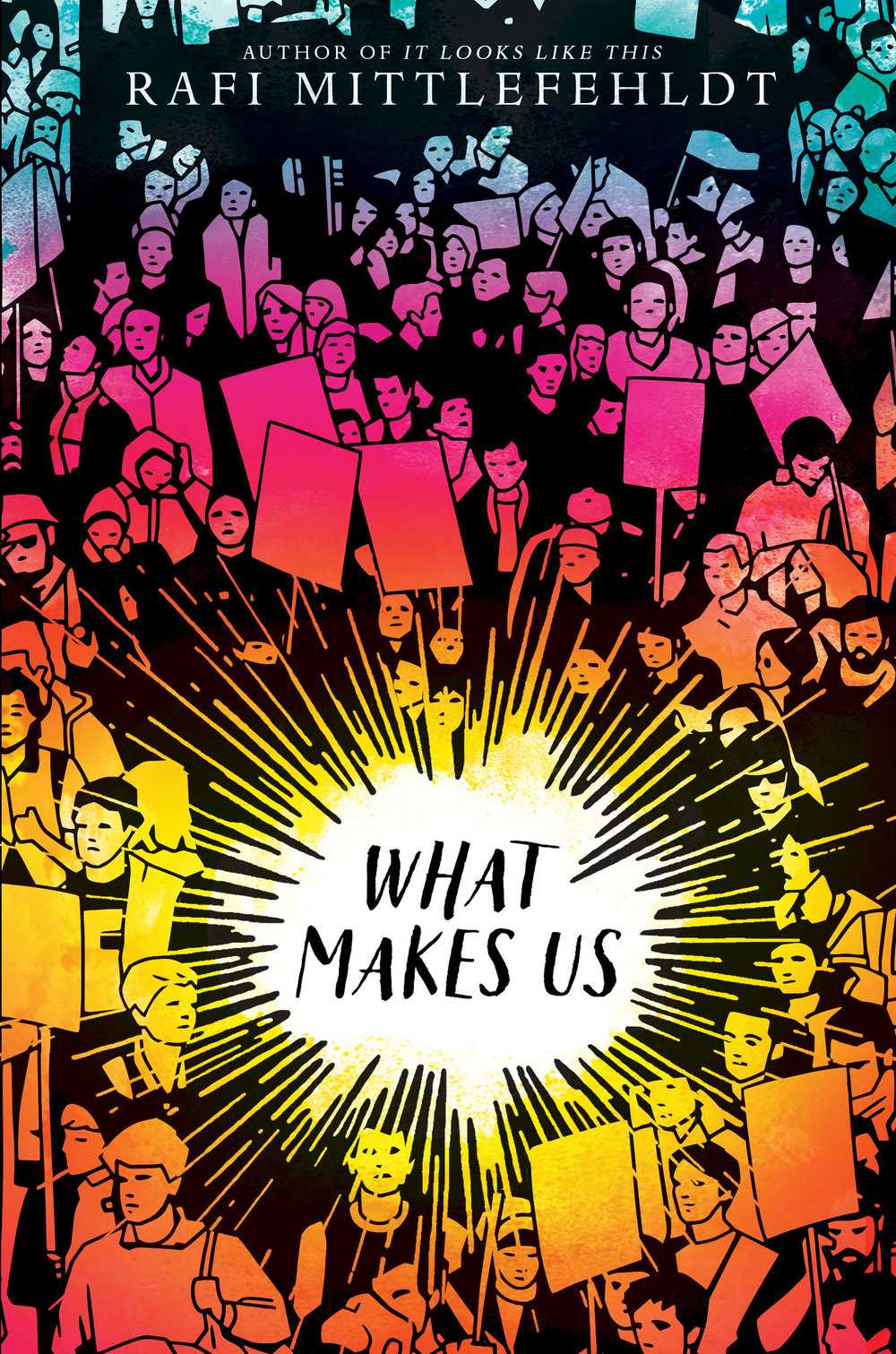