Last week on What If…? episode 6, we saw what would happen if Killmonger saved Tony Stark during the events of the first Iron Man movie.

There were quite a few major deaths along the way, which has been a theme for What If…? as of late. Some of these episodes have been pretty dark (zombies, anyone?), but this week was bound to change that with the introduction of Party Thor.

I have to say, I enjoyed the change in tone with this one, as it was starting to become a downer watching Tony Stark die time and time again. Although there was plenty of destruction, this version of Thor wasn’t evil—just very, very misguided. 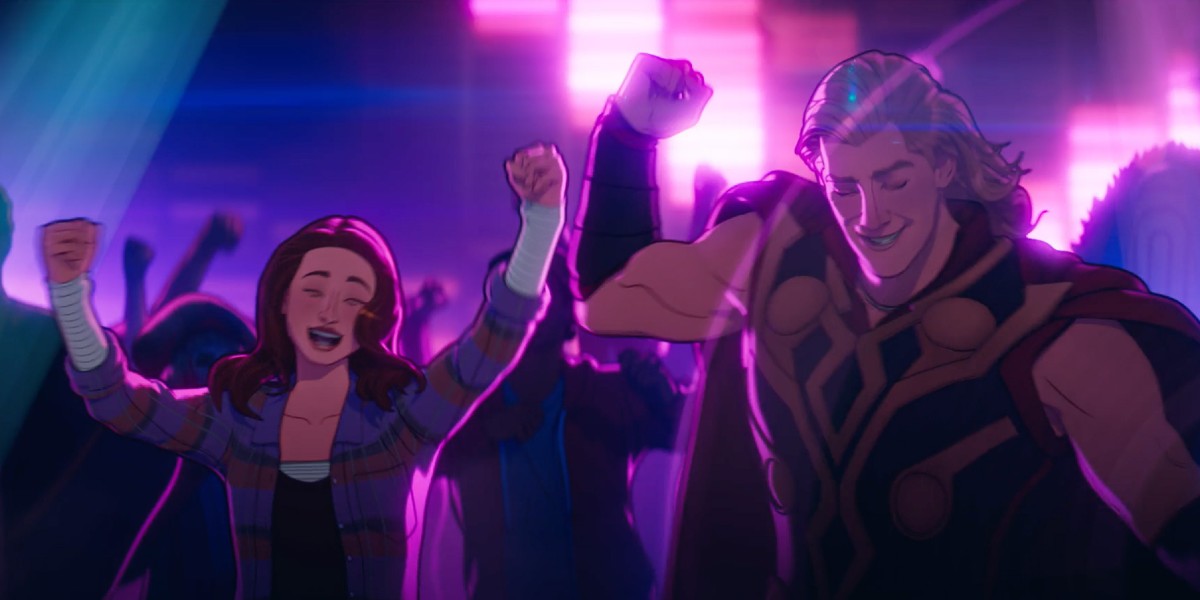 The change in this universe is a pretty obvious one: Instead of keeping Loki as a baby, Odin returns him to his people. As a result, Thor never learned the lessons he should have as a child. He never learned to be a good and kind king.

When the Odinsleep settles in, Frigga visits her sister in another realm and explicitly tells Thor to study up on the people he’ll one day rule. Thor obviously interprets this as a green light to go down to earth and party like a rockstar. He doesn’t want to be a boring king like his father, after all.

This version of Thor reminds me a bit of Hemsworth’s character in Rush. He’s definitely a playboy and only wants a good time. He’s not exactly concerned about making sure he and his friends don’t wreck the house, as it were.

Speaking of his friends, this episode has plenty of cameos from across the universe. We get to see Howard the Duck, the Grandmaster, the Skrulls, Nebula, Korg, Drax, and plenty more. And boy do they make a mess.

But I couldn’t write this What If…? episode 7 review without mentioning Loki and his ice giant friends. Turns out not growing up together made Loki and Thor pretty good buddies—brothers from another mother, you might say. This version of Thor is a perfect match for Loki’s trickery, and honestly, it’s just nice to see them getting along.

Even Jane and Darcy jump on board, with Jane getting a tattoo and Darcy marrying Howard. It’s fun seeing Jane meet Thor again for the first time. Their attraction to each other exists just as strongly in this universe, even though it means Jane must go against her better judgement. 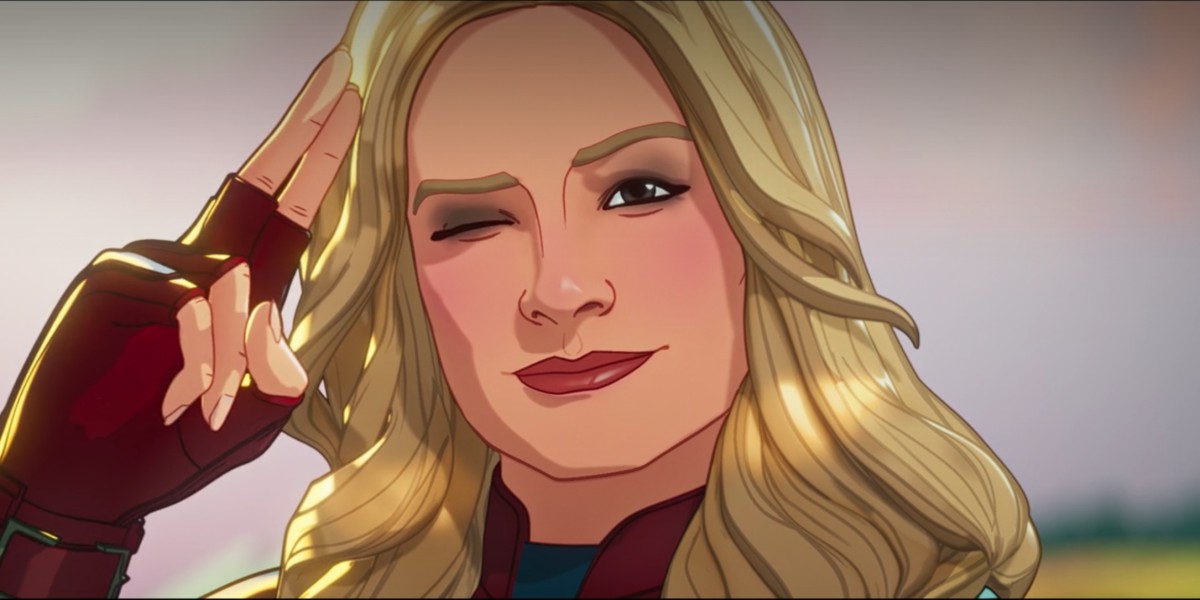 But Jane does get a rude awakening sooner rather than later. She had tried to warn S.H.I.E.L.D. of an alien invasion, so when it comes true, they reach out to her the morning after their rager. Hiding the fact that she was partying with Thor, Jane and Darcy follow Acting Director Maria Hill and Agent Rumlow to their headquarters.

Turns out, Fury showed up at the party and demanded an audience with Thor, but a very enthusiastic Korg accidentally knocked him unconscious. Jane feels bad about the whole situation, and while she is afraid for Earth’s well-being (Thor kind of destroyed the last planet he partied on), she doesn’t want to hurt the god of thunder in the process.

But Maria needs this situation wrapped up ASAP, so she decides to bring in the big guns. Pulling out a pager and seeing everyone’s reactions will never not be funny to me. But help is on the way in the form of Captain Marvel, and Thor definitely has no idea who he’s up against.

Carol arrives in France and tells Thor he and his friends need to leave the planet. I can’t leave this What If…? episode 7 review behind without mentioning the tension in the air when Thor is trying to figure out what to call a woman like Carol. He lands on party pooper, but that dramatic pause was definitely aimed at all the toxic dude bros who hate this version of Captain Marvel so much.

Obviously Thor isn’t going to leave just because a party pooper told him to, and Carol is too afraid to exert her full power against him because she doesn’t want to put a crater in the side of the planet.

Not that it’ll matter much soon, as they’re destroying the Earth one landmark at a time. We see power going out across the country, the St. Louis arch being used as a slingshot, Surtur destroying the Statue of Liberty, Thor taking out Stonehenge, and Mount Rushmore getting an icy makeover.

The planet is doomed unless someone does something about it. 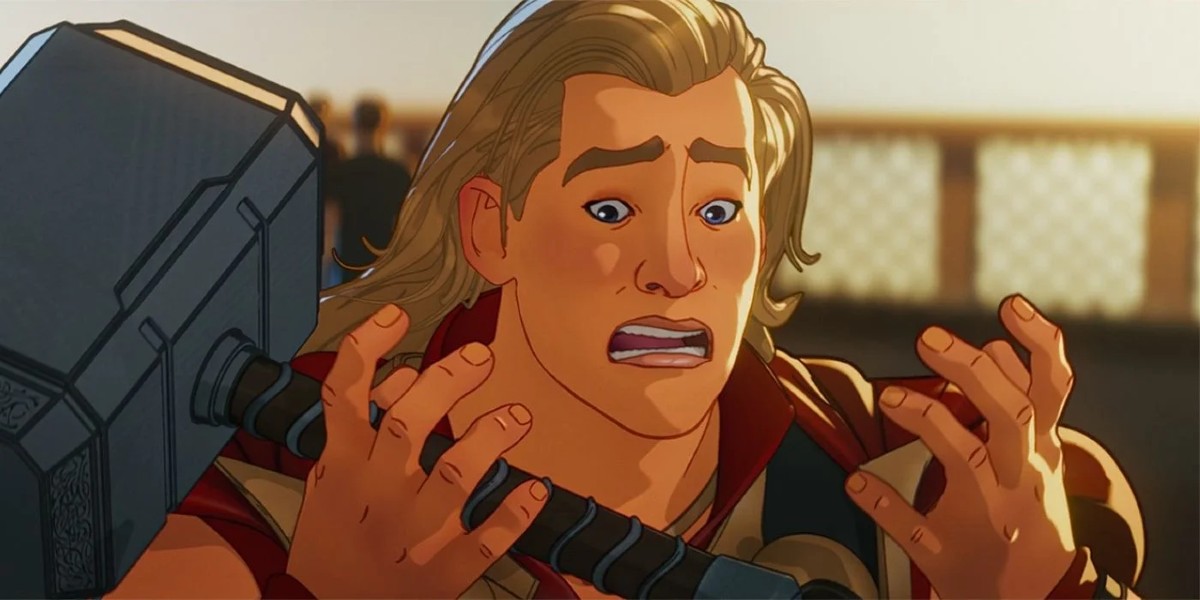 Carol plans to take Thor into the middle of Siberia and go, and I quote, “kaboom on his ass.” Maria Hill also doesn’t plan on leaving anything to chance, so her backup is to use a nuke if Carol can’t get the job done.

It’s not a bad plan (not a great one, either), but Jane is definitely against kabooming Thor’s ass. She know he needs to be stopped, but she also knows he doesn’t understand the havoc he’s wreaking. They need bigger guns than Carol’s.

That’s when Jane gets the genius idea to call his mother. Well, she calls Heimdall, and he sends her to Frigga. I have to say, writing this What If…? episode 7 review reminded me how much I missed Jane. This is her first major appearance in the MCU prior to Thor: Love and Thunder coming out in 2022 since Thor: The Dark World!

Thor gets wind that Frigga is on her way to Earth, and so like any teenager who threw a party he wasn’t supposed to, now the god of thunder is panicking. He asks all his friends to help him clean up the mess, but they all start wandering off in different directions. Loki in particular is ready to leave Thor high and dry. Guess some things don’t change.

But then Thor uses his King of Asgard voice, and everyone helps him put everything back where they found it. When Frigga arrives, he’s teaching a class on midgardian culture, and even Captain Marvel shows up to offer some credence to the illusion.

But then Thor calls his hammer and it’s covered in paraphernalia. Frigga is disappointed, but at the end of the day, I think Thor leaned some valuable lessons after all. He even tells Jane that while calling his mother wasn’t cool, it was also the right thing to do.

The tone of the episode was a lot happier than the last few, and it was nice to have our spirits lifted for once. But just as the Watcher says they lived happily every after, a portal appears in the distance.

And who walks through it? An army of robots, led by Ultron in a suit complete with the infinity gauntlets. That can’t be good.