Author Nancy Richardson Fischer’s upcoming novel The Speed of Falling Objects promises to be a riveting story about survival and we’ve got your first look at the cover as well as the first chapter!

This new YA novel, set to be released on October 1, 2019, sounds like it combines all of the best elements of contemporary YA novels with the most heart-pounding aspects of survival stories.

Danger “Danny” Danielle Warren is no stranger to falling. After losing an eye in a childhood accident, she had to relearn her perception of movement and space. Now Danny keeps her head down, studies hard, and works to fulfill everyone else’s needs. She’s certain that her mom’s bitterness and her TV star father’s absence are her fault. If only she were more-more athletic, charismatic, attractive-life would be perfect.

When her dad calls with an offer to join him to film the next episode of his popular survivalist show, Danny jumps at the chance to prove she’s not the disappointment he left behind. Being on set with the hottest teen movie idol of the moment, Gus Price, should be the cherry on top. But when their small plane crashes in the Amazon, and a terrible secret is revealed, Danny must face the truth about the parent she worships and falling for Gus, and find her own inner strength and worth to light the way home.

I don’t know about you, but I’m definitely intrigued by the book’s official synopsis alone (and not just because it had me at the fact that I share a first name with the story’s protagonist). There are so many different threads introduced here that I can’t wait to see play out.

But if the synopsis intrigued you, then the cover for The Speed of Falling Objects (as well as its dramatic first chapter) will definitely make you wish you could get your hands on a copy tomorrow.

So, without further ado, here’s the stunning cover for ‘The Speed of Falling Objects’ by Nancy Richardson Fischer! 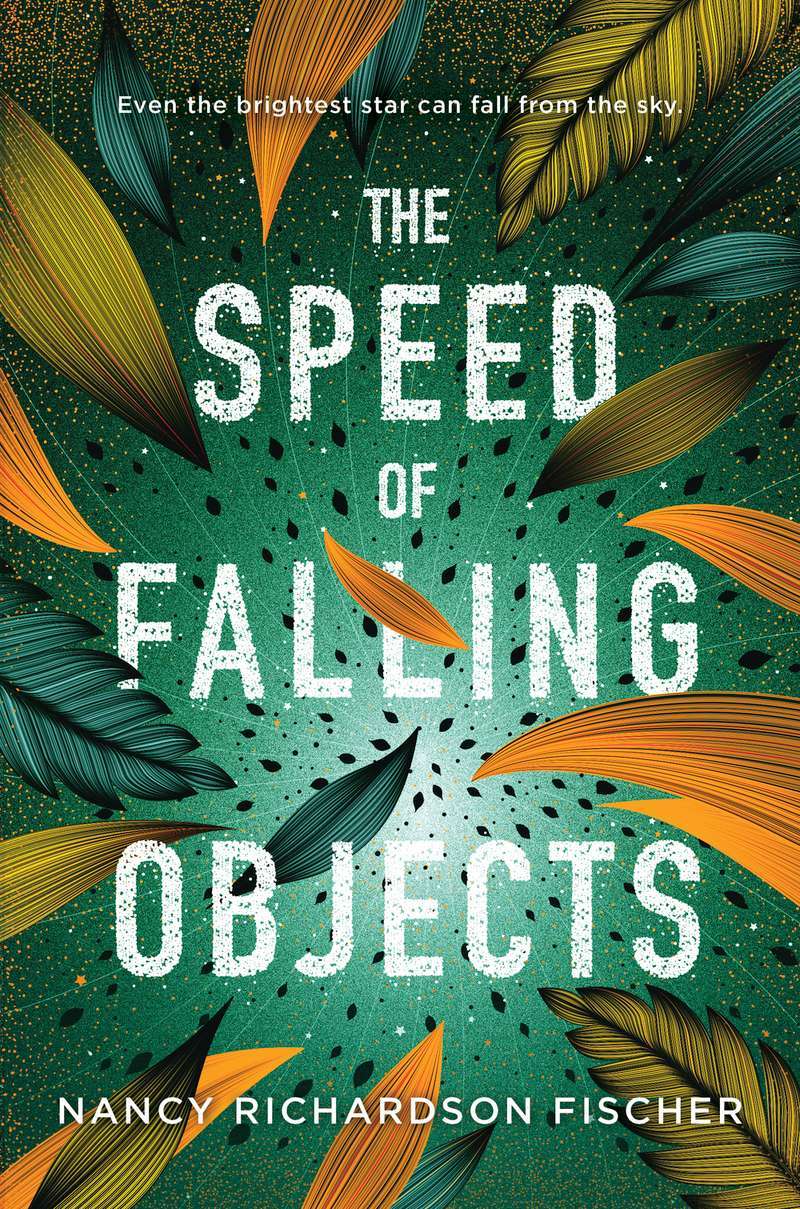 And now, here’s your exclusive look at the first chapter of ‘The Speed of Falling Objects’! 👇🏻

There’s silence, followed by individual sounds, like someone conducting a nature symphony—first birds with different songs, then the deep vibration of frogs, the buzz of myriad insects, and an undercurrent of slithering that might be my imagination. I don’t know. I’ve never been in the rainforest before.

The world is dark, just a pinhole, that slowly expands. Splashes of iridescent paint turn into birds taking wing. Below, flowers explode like fireworks—crimson, hot-pink, cobalt. Twisted roots tunnel into coffee-colored earth. The rich smell of organic matter mingles with the musty funk of decomposition. Above my feet, every possible shade of green made from clusters of leaves. Massive palm fronds allow temporary slivers of a stormy sky. Lightening licks its dark gray fabric.

A wave of vertigo hits and I’m spinning again. Screams echo. Are they Cass’s, Jupiter’s, or mine? All I know for sure is that they’re not Cougar’s.

My world is upside down.

No. I’m upside down still strapped in, feet above my head tangled in a thorny vine that is suffocating a tree’s thick limb. The airplane seat beside me remains connected but it’s empty, the metal caught in the bough of a massive tree that suspends me two stories above the ground. My stomach, despite the painful compression of the seatbelt, lurches.

Where’s Sean? He was sitting next to me when … We were talking about surfing and then…

Raindrops patter down on my face. They’re hot. Rivulets leak into my mouth, tasting like copper, salt. I touch my tongue. My finger comes away stained red. I look up, a little bit to the left, and then close my eyes, brain scrambling for a different explanation.

I hear my mom’s no-nonsense voice like a siren in my brain: List everything that scares you. When you give your fears a name, it takes away their power.

The nightmares began when I was eight and lasted an entire year. After each one, my mom would make me list the things that scared me, then everything I liked, then what I wanted to be when I grew up. It became my mantra—a way to cut the dark dream threads. The list changed over the years, but now I revert to my eight-year-old self.

I am afraid of…

More droplets patter down on my forehead, dribble into my hair. I refuse to look up again.

Flannel sheets. Some Thursdays. My mom’s smile. Milk Duds. Writing letters. Carrot cake … Making people laugh. Creating dioramas. Dancing if no one is watching. My dad’s phone calls. The Phantom Tollbooth. Dogs. I like dogs that I know. Dad’s show.

My head is pounding so hard that my skull may explode. If I pass out upside down, will I die? The ground is far, probably twenty feet. Unlike my father, I’m not a coordinated cat with nine lives. My neck will snap if I land on my head. Death, if I’m lucky. Paralysis if I’m not. Both ankles will break if I come down on my feet, possibly fracturing tibias and fibulas, too. Maybe only my ribs will splinter if I land on my side, but that could puncture a lung. If my back and pelvis break like twigs, there’s no way I’ll be able to drag myself out of this place.

A hysterical giggle burbles to the surface. I don’t even know where I am. My vision blurs.

When I grow up I want to be…

I unbuckle my seatbelt and drop.

The Speed of Falling Objects by Nancy Richardson Fischer is set to hit shelves on October 1, 2019. You can preorder your copy now from Amazon, Barnes & Noble, The Book Depository, and your local independent bookstore. Also, don’t forget to add it to your Goodreads “to read” list!