The Priory of the Orange Tree’s success shows that there’s a market for queer, feminist epic fantasy written by women.

Samantha Shannon, known for The Bone Season series, brings a new wave of epic fantasy in The Priory at the Orange Tree. She took the age old adage of “be the change you wish to see in the world” and transferred it to books: write what you want to read.

Upon first inspection, The Priory of the Orange Tree looks daunting. At 848 pages, some would balk at its size, but when you think about how it is a standalone novel, it doesn’t seem nearly enough (but it is, and it’s everything I’ve wanted in an epic fantasy). It’s broken down into six sections, making it easier to handle. That being said, I absolutely love long books and spectacular world building and Samantha didn’t disappoint.

Reading The Priory of the Orange Tree I can tell that Samantha is an avid history buff from the way that she describes everything from the clothing, to the speech patterns, and the names she chose throughout the book. The passion in the writing is apparent, and I can tell how much love and care went into writing about Ead, Tanè, Loth, and Niclays. 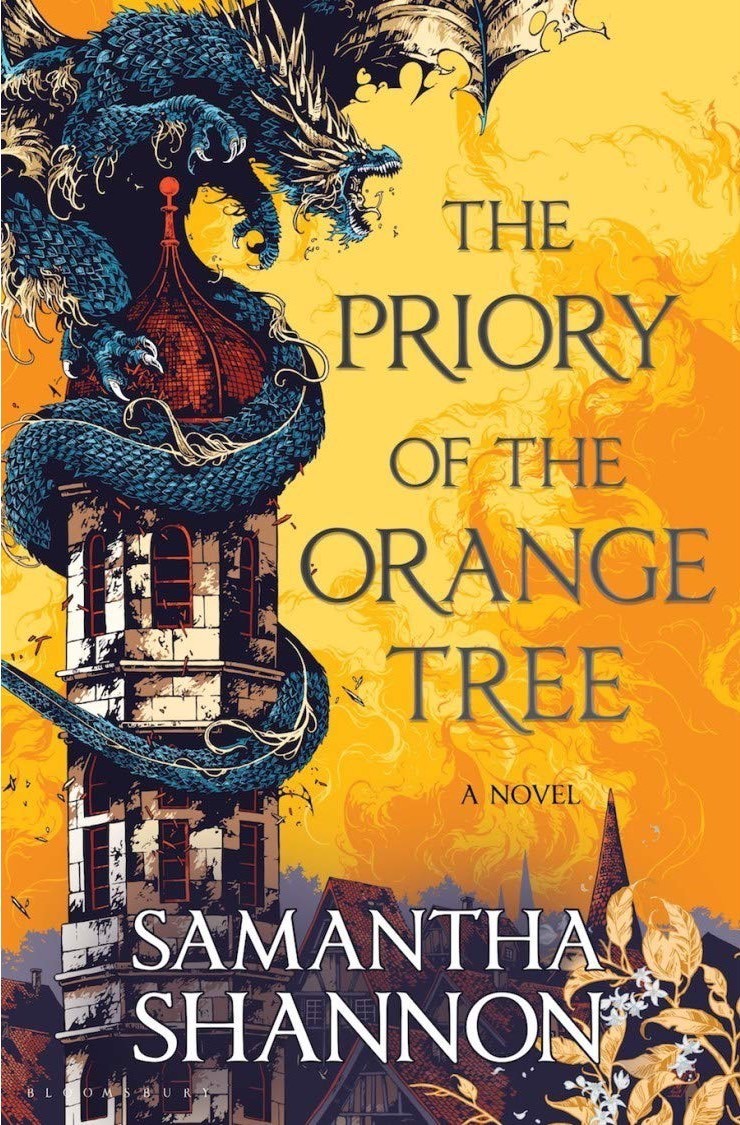 Broken down into four points of view, two men and two women, Samantha utilizes each character differently, as well as using the cardinal directions in her chapter breakdowns to further separate the interwoven plots. The world building alone is a masterpiece, with religions, different lore and histories, as well as differing societal norms seeping into the pages of the book, coating it in a rich, spellbinding tale that takes hold of the reader and doesn’t let go.

The four main characters are diverse in race, sexuality, ideology, and ability. Not only that, but all of the background characters are thoroughly fleshed out. Even characters who are only in a few scenes themselves have an aura about them that the reader can imagine a plot line for them in the tale as easily as the main characters. Samantha’s characters are driven, imperfect, and human. Emotions run deep, beliefs are the building blocks in which they stand, and each has a strong sense of duty and honor that means something different for the main four as well.

Stepping back a moment, I want to discuss the importance of the hype that surrounds The Priory of the Orange Tree and the impact it has on epic fantasy written by women.

I say find, because I’d rarely seen any advertised. Being a fan of plot lines with thieves and assassins, I started there. I found The Assassin’s Apprentice by Robin Hobb, and spent a whirlwind of a year reading her epic fantasy series. I did the same with Lynn Flewelling’s Nightrunner series, devouring it as fast as I possibly could.

They were different. They weren’t the same plot I’d read time and again but with minor changes. I yearn for fantasy, but I believed I’d found all there was, the chosen male who had a sword, a girl at his beck and call, and an evil to be slain. Women, I’ve found, have a way of weaving worlds and words powerfully, with a deeper understanding of the opposite sex. In my opinion, women can write men better than men can write women, but that’s a completely different article for another day.

Robin Hobb and Lynn Flewelling, though amazing, started their series in the ’90s and the main characters are male. Growing up, only reading fantasy by men with poorly written female main characters, I thought I hated female-led books. For years I told people I only liked books with male main characters because I didn’t realize that women could be written well.

We are as diverse in personality and strengths as any man, and yet all we see are perceived “strong” female characters who in actuality are just coded to act like men, or we are told they are strong but then their actions prove otherwise.

Back to the importance of The Priory of the Orange Tree: Samantha Shannon has given readers an outlet, a jumping off point in which there is no return in regards to female-led fantasy. Ead, Tanè, Queen Sabran, Margaret Beck, Truyde utt Zeedur, Igrain Crest, Donmata Marosa, and all of the members of the Priory show us that women can not only be catalysts in a story, but that there is room for more than one woman in each story told.

Close to four years after I wrote the first words . . . it's finally, finally real. pic.twitter.com/Sk0qxIyayS

Every single woman in The Priory of the Orange Tree has their own beliefs, strengths, and weaknesses. There is self-doubt, depression, love, resilience, perseverance, betrayal, courage, and countless other descriptors for each and every one of them, and I cannot recall another book that had such an amazing, eclectic cast of characters of women.

Not only that, but the romance subplots of the book are well-done and interwoven so completely that it didn’t feel forced. From two lovers who fight separately for what they believe in, to an exiled man who will forever be bereft of a lost love he will never see again, to a Queen’s love and affection that is forbidden, to the love of friendship and how powerful it can be, to an arranged marriage that turns into something more… the character dynamics of the book are simply magical.

On top of the different types of love shown throughout, the main romance plots are LGBT+, which is practically unheard of in epic fantasy. There are, of course, a few, such as Swordspoint and the Nightrunner series, but barely being able to count them on one hand isn’t enough, especially if you consider how long ago they were written.

We must also take into account that most LGBT+ in adult fantasy are gay males with not a lot of diversity on the LGBT+ spectrum at all. Again, The Priory of the Orange Tree shows readers that LGBT+ characters can be integrated and interwoven into fantasy without taking away from the story. The love that Niclays has, and his heartbreak years after being separated by the love of his life, a man who he’d been with despite them being married to a woman, sits with me weeks after finishing the book.

The slow build between two women (who I won’t reveal because spoilers! It’s so good!) was so refreshing and heartfelt that I can’t recall a more realistically written love story between two women in fantasy, which leaves me both bereft and hopeful that this will lead to more f/f epic fantasy.

I didn’t know how hollow fantasy felt until The Priory of the Orange Tree filled that void. Samantha may have written what she wanted to read, but in doing so she opened the floodgates to readers who now know that women have as much of a place in fantasy as any male character. I want more epic fantasy like The Priory of the Orange Tree, and we can hope publishers see and hear the impact this standalone book has had on readers.

Related articles: ‘The Priory at the Orange Tree’ establishes a dominant female voice in epic fantasy, Samantha Shannon discusses writing the feminist fantasy she never had