Allow me to introduce your newest fantasy obsession.

There is a particular feeling that comes over me when reading truly fine fantasy. It’s the sense that border between my world and the world within the novel has disappeared. On the page and in my thoughts, I can slip between the two seamlessly, wondering over problems of succession in an imaginary realm as palpably as I look for a parking spot.

It takes a collection of factors to produce this feeling — bold characters, compelling conflicts, and a tightly realized world all bound up in delicate writing. But the central quality that distinguishes an instant classic is confidence, the unshakable faith of an author in their own realized dream.

Samantha Shannon, author of The Priory of the Orange Tree, has a hell of a lot of confidence. She is no stranger to the field of fantasy literature; the author of the bestselling Bone Season series has certainly established herself as a reliable spinner of well-crafted and uncompromising tales of spirits, magic, and mystery.

Still, The Priory of the Orange Tree demonstrates a remarkably fresh and frankly fearless new direction from the young author. The Priory of the Orange Tree is a behemoth of a book, nearly as thick as an iPhone is wide (I checked.) Its romance-and-loss-studded tale spans multiple continents lurid with history, tradition, prejudice, and lore. Traded between four distinct and potently-realized narrators, the novel is as immersive as it is uncanny, familiar as it is entirely new.

In the Queendom of Inys, courtly intrigue threatens to ensnare an independent Queen Sabran, and her secret magical protector, Ead Duryan. Far across the sea, an orphan named Tané fights to be raised to her country’s greatest fighting force — but one wrong decision could destroy her lifelong ambition. A embittered exile doctor finds himself stirred into beaurocatic mess with deadly consequences, while a young courtier is charged with an impossible mission that shakes the very foundations of his fervent religious faith.

And like deadly threads, dragons both good and evil slowly wind the distant actors — and their miraculous gifts — together.

If these elements seem reminiscent of modern fantasy’s current portly papa George R.R. Martin, you would not be far off the mark. From the finely-wrought politics to arcs of ancient magic, ruthless character management and delicately evocative description, The Priory of the Orange Tree will certainly call to mind the landmarks of A Song of Ice and Fire. But Shannon’s newest work also stands boldly apart.

Her story pulses with feminine strength, centering women of all associations, alignments, and strength. The women of this world are warrior mages and conniving politicians, witches and goddesses, readers, schemers, and peasants. Second to none, they are given limits, but are not limited. As such, the novel works so well as an intricately realized and feminist fantasy that one might even be tempted to dub Samantha Shannon, “The female George R.R. Martin.”

I would not object.

What makes The Priory of the Orange Tree such a singular piece is its seamless integration of modern sensibilities into a setting and story still rich with the most beloved trappings of fantasy. Ballgowns and courtesies frame a tender and sensual queer romance. The fate of male heroes both strapping and aged swings on their kindness, diplomacy, and sensitivity. And history, politics, and religion weave around familiar gender roles; the story by turns interrogates and shoves free of conventions that persist in both literature and life.

All of this, Samantha Shannon tackles with charismatic confidence, engendering The Priory of the Orange Tree with an exhilarating freshness even as the story visits some familiar fantasy beats. Though there are a few slow moments (nearly impossible to avoid in a book this size) Shannon mostly maintains this sense of lively movement throughout her labyrinthine epic. Relying on her rotating points-of-view, each with their own prejudices, agonies, and loves, she continually raises stakes both magical and political. Like Martin before her, she presses her characters to and even beyond their most extreme limits, delighting in what comes out against the strain.

As with the best of fantasy, The Priory of the Orange Tree feels less like a book than it does an experience, a true sojourn into a rich and terrible new world. Come, taste the food of an Inysh feast, touch dragon scales, burn with magic. Love, and lose, and love again. Transportive and profound, as thoughtful as it is exciting, Shannon’s doorstopper will probably make your back hurt with its weight — but you I highly doubt you will notice. 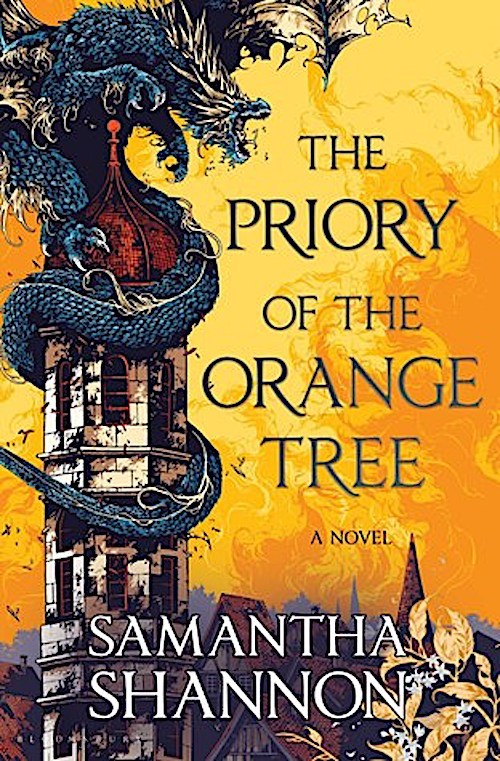 Find The Priory of the Orange Tree by Samantha Shannon on Feb. 26 from Amazon, Barnes and Noble, and your local independent bookstore.