We use cookies to ensure that we give you the best experience on Hypable. If you continue to visit us, we will assume that you are happy with it.
3:24 pm EST, December 27, 2019

‘The Mandalorian’ season 1, episode 8 review: Love, loss, and what he wore

A clan of two is born in The Mandalorian season 1 finale.

The Mandalorian season 1, episode 8 is not subtle in its intentions. Titled “Redemption,” the episode relies heavily on notions of loss and purpose that are popularly associated with redemptive behavior, following up on the familiar beats of sin (in episode 3) and reckoning (in the penultimate episode).

“Redemption” is the work of fundamental beats that, admittedly, require a few tweaks in the story’s logic. But underlying it all, is the resonant emotionality and profound connection that makes The Mandalorian such a delightful piece of Star Wars storytelling.

Ever-present through The Mandalorian season 1 finale is the overwhelming pressure of loss; tragedy that is itself a trial, given meaning only through the redemption of others. Kuiil’s death in the previous episode, and the lingering shot on his broken body, serves as a prologue to the kind of sacrifice required in a story like The Mandalorian.

Loss, both past and present — and the sacrifice it engenders — mark the episode. Moff Gideon’s declaration that Cara Dune comes originally from Alderaan is a brief moment in the action, but a powerful reminder of the degree of tragedy that exists in this universe (as well as adding context to Cara’s loathing for Imperials).

On a more intimate scale, the Mandalorian discloses the full truth of his traumatic youth — the brutal destruction of his home during the Clone Wars, the murder of his parents, and his own redemption from the pit (more or less literally) at the hands of his Mandalorian saviors. 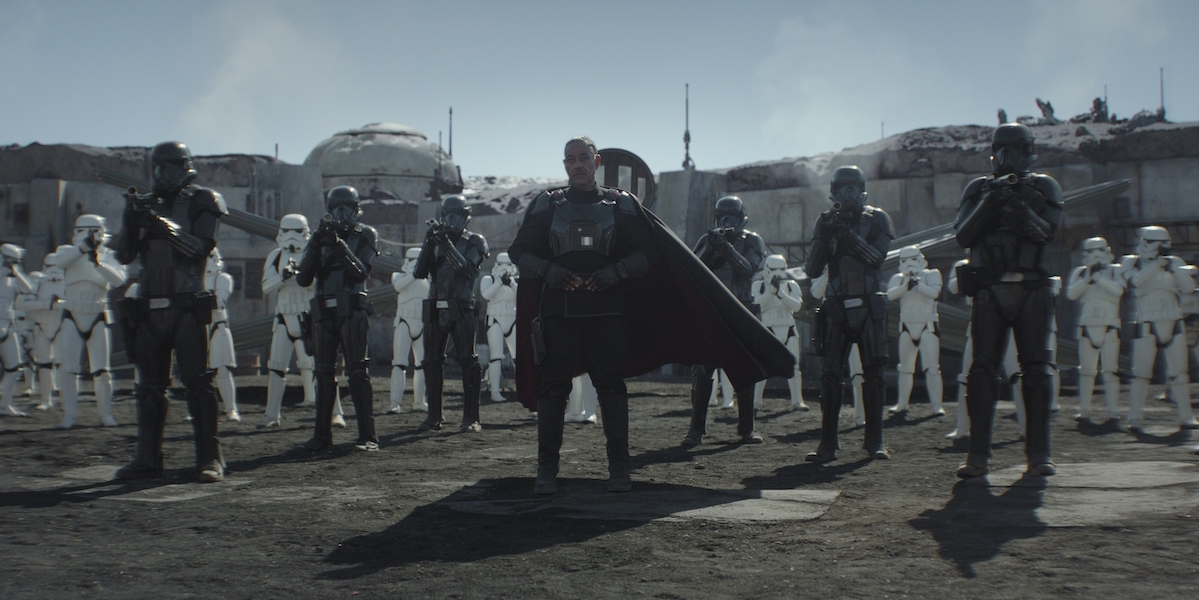 In fact, throughout The Mandalorian season 1, episode 8, it is Mando himself who is on the receiving end of redemption. Even near death, refusing aid from Cara Dune and insisting on a self-sacrifice in place of salvation, he is continually saved from darkness.

First Baby Yoda (healing powers seemingly deactivated for now) uses the Force to save the group from a torrent of hellish fire. Then IG-11, who has already rescued the child from chatty troopers, heals Mando from his mortal wound by using an Eowyn-esque workaround of the Mandalorian’s code, revealing the man’s true face for the first time.

Coupled with the revelation of his name — Din Djarin — this is an almost baptismal moment for the Mandalorian, the beginning of his rebirth in a new mission.

The cycle of loss and redemption continues. When Mando discovers the near-annihilation of his cohort, who laid down their lives after revealing themselves to protect him and Baby Yoda, he is again nearly swayed to a different path. 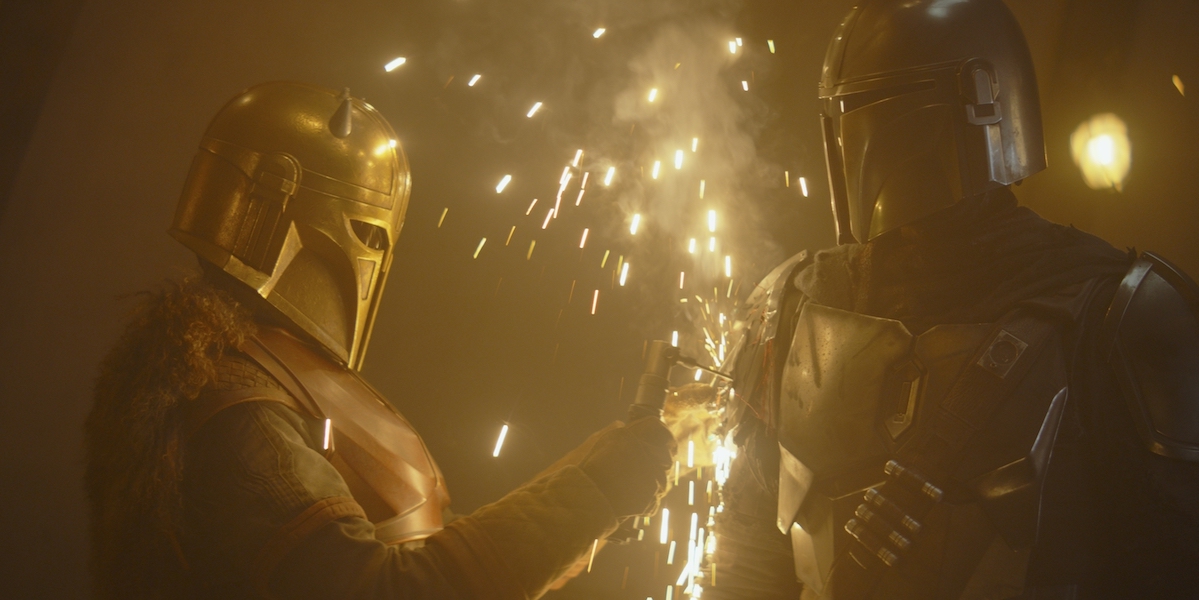 The sight of the abandoned beskar armor seems to move Mando to a greater emotional degree than we have yet seen in the series, exposing just how deeply he relies on both the Code and the community that accompanies being Mandalorian. Even as his personal identity is revealed, his communal identity is almost fatally undermined.

As it turns out though, it is the bulwark of that community who again restores the Mandalorian to “The Way”, another act of redemption. His life is not truly his to sacrifice — instead, the Armorer rebuilds him, charging him with a mission to return his child Foundling to its people and uniting the two by bestowing Mando with the signet of the Mudhorn.

The Armorer too skates the edge of sacrifice, defending against oncoming stormtroopers; fortunately, her skill is such that this is not ultimately necessary.

In its climax, “Redemption” once again makes itself literal in the person of IG-11. (We hardly knew ye.) In a final, and very touching sacrifice, the droid too transfers his protective mission to the Mandalorian, self-destructing so that the group can emerge from the dark, hellish river of fire into light and safety. 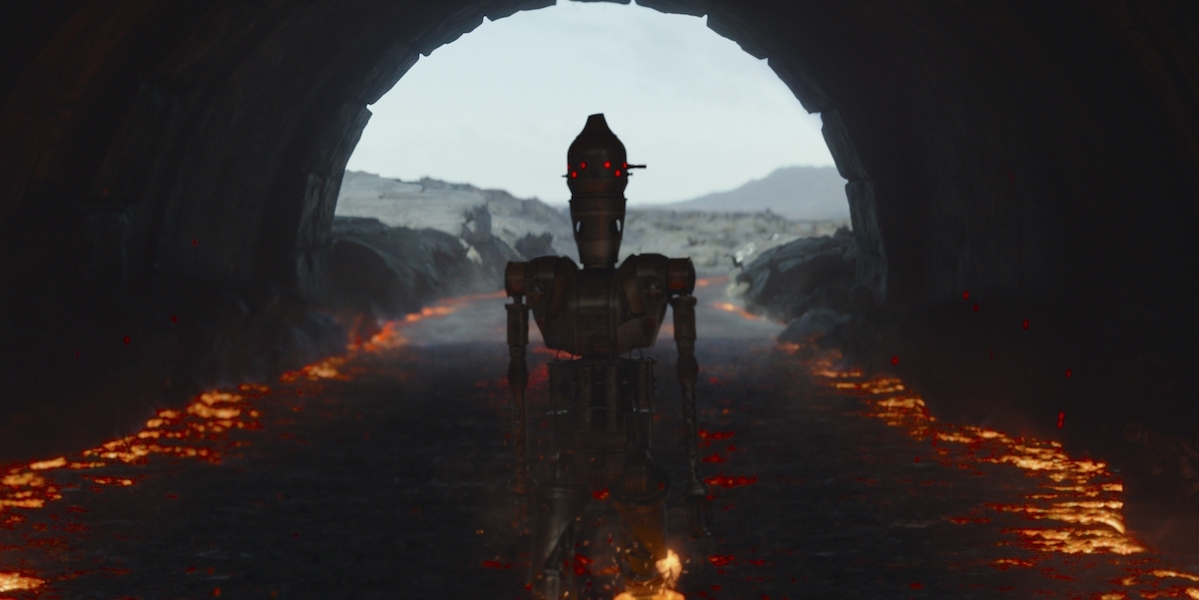 Now how’s that for a visual metaphor?

Appropriately, the Mandalorian’s final offensive act of the episode is, while also redemptive (and more than a little crazy) not sacrificial. Using his newly earned “Rising Phoenix” jetpack, he assaults Moff Gideon’s TIE fighter in the heavenly sphere, bringing it crashing to Earth. With Navarro apparently free from Imperial rule, he bids farewell to Cara Dune and Greef Karga and takes off into the sky to complete his mission.

But of course, this said mission is going to be a bit more complicated than even “searching the galaxy for the home of this creature and delivering it to a race of enemy sorcerers” can quite encompass. For one thing, to which people is Baby Yoda meant to belong? Is it the Jedi, long dead and only just now being marginally revived? Or is it his green and wrinkly species, of which almost no information has been made known? 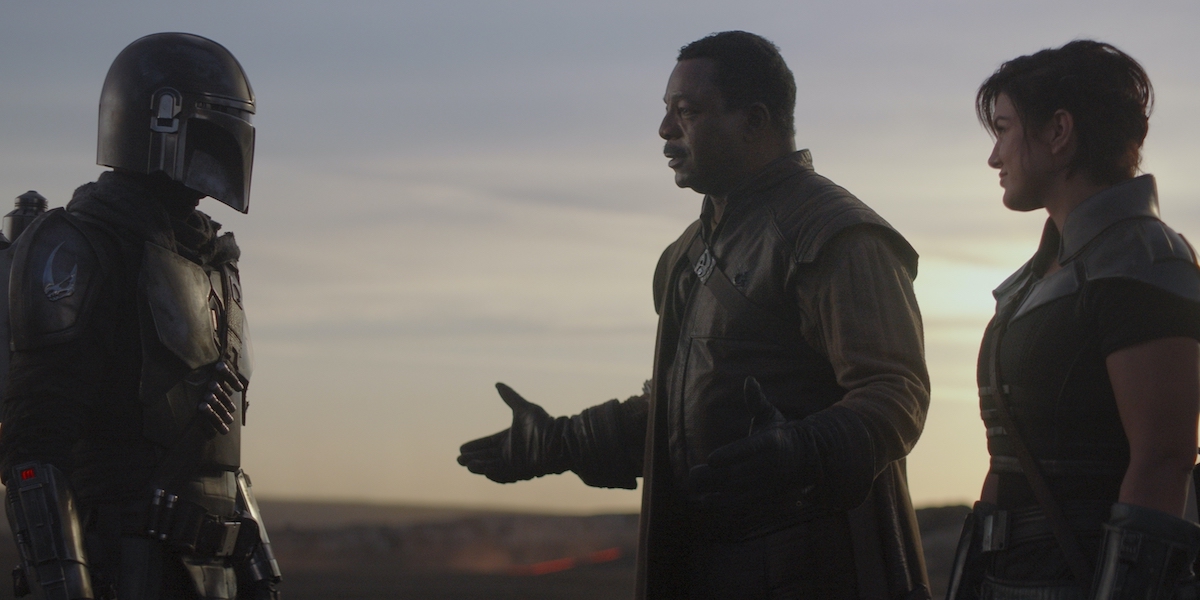 While the Armorer doesn’t believe that Baby Yoda can be trained as a Mandalorian, perhaps this mission might be more aligned with some of the concluding symbolism of The Mandalorian season 1, episode 8. The Mandalorian Mythasaur pendant, worn now by the child, is a visual promise of the now-formal fatherly bond between them; perhaps there is more Mandalorian in Baby Yoda’s future than we think.

What’s more, the story of Moff Gideon is not over either — and this too has further links to Mandalore. The Moff carves his way free of his crashed TIE with no less a weapon than the Darksaber, a powerful blade and even more potent symbol of Mandalorian history.

Clearly, this guy is not just obsessed with Baby Yoda, but also with the people of the Creed. If his arrival in the first season was belated, at least Moff Gideon is now poised to be a truly terrifying opponent in The Mandalorian season 2.

Hopefully though, the Mandalorian will no longer feel compelled to respond to this threat with sacrifice. Enough agonizing redemption has been achieved already, and it does not end the story. The Mandalorian season 2 has the chance to tell of what happens next — the hard work, the enduring bonds, and the mutual salvation of profound love.

And hopefully, a lot more cuteness from Baby Yoda.

What are your thoughts on ‘The Mandalorian’ season 1, episode 8?