‘The Good Place’ series finale review: The ocean and the door

All good things must come to an end. Here’s our review of The Good Place series finale.

So, the Soul Squad has reformed themselves, proven the human capacity for goodness, diagnosed and redesigned a broken Afterlife, and saved paradise from itself. What could possibly be next?

Well, that turns out to be exactly the question.

In television terms, every series finale is a death. It is the end of the road, a sometimes protracted farewell to the life and lives that exist within the tiny bubble universe on our screens. Sure, in the age of the reboot it’s possible that familiar places and faces will return; but the arcs and characters that comprised an original adventure are finalized, carved into canon, the door closed behind them.

The Good Place series finale feels like several deaths, for all that its cast of characters are all either dead or were never alive in the first place. After solving all of the Afterlife’s innumerable problems, including breaking the Good Place in order to fix it, the final episode, “Whenever You’re Ready,” follows the cast as they eventually chose to relinquish their eternity and dissolve into the gentle ocean of the universe. 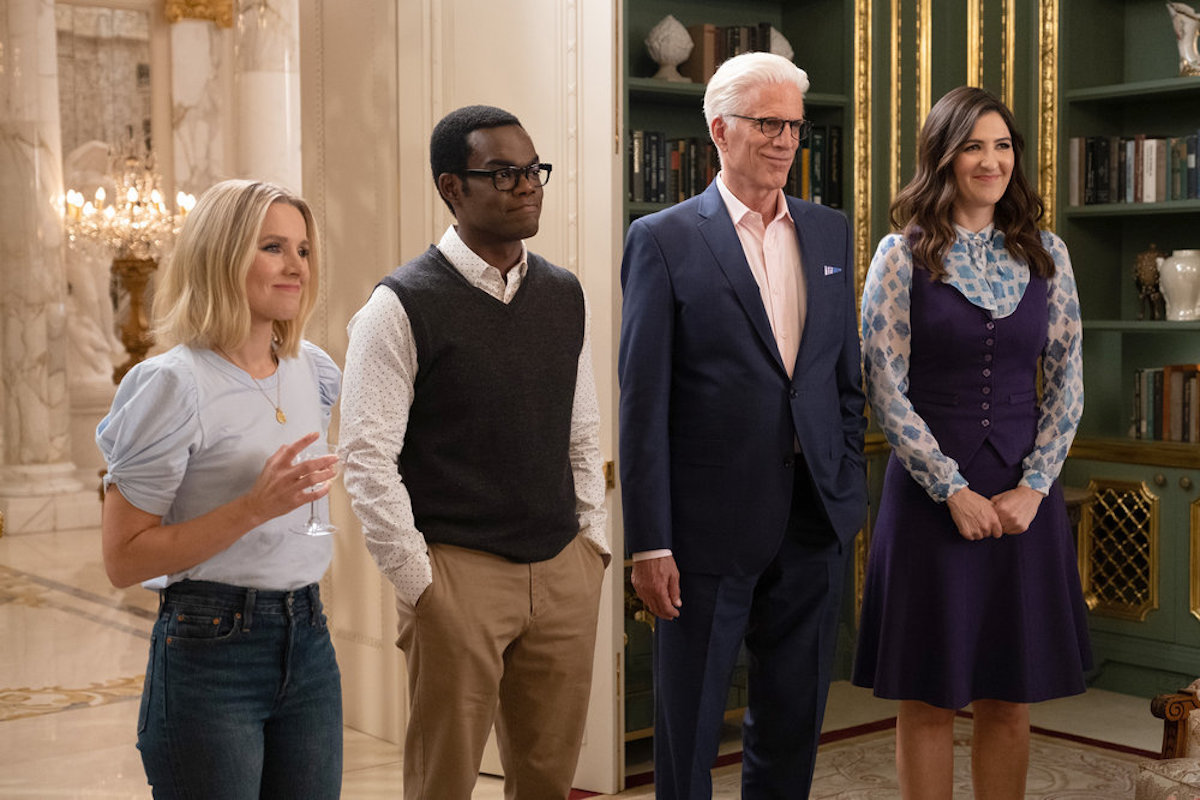 Of course, The Good Place series finale isn’t unique in sending off its characters in permanent fashion — finales, obviously, are no stranger to shocking and/or inevitable deaths. Nor, thanks to the invention of the Last Door, is this a surprising turn of events (though “Whenever You’re Ready” does manage to neatly include a few twists and surprises along its hour-plus runtime.)

The unique form that ‘death’ takes in paradise though, is a particularly poignant and bittersweet one. The Last Door is not a mechanism of suicide, but one of completion; it is used by those who feel satisfied, finished. Ready, whatever that really means.

But though stepping through the Door is not a tragedy, it does embody something profoundly tragic — the conclusion of happiness. As last week’s episode made clear, humans in heaven are still human, and even the greatest and most sublime happiness cannot be experienced forever. Eleanor might reference the eternal search for comprehensive moral rules, but she is not destined to find them; no one is. The happiness runs out before the quest is completed.

It’s this fact that makes The Good Place series finale a fundamentally sad experience, even though the episode is almost entirely free of conflict and antagonism, and is essentially a perfect sendoff for this quirky, questioning adventure. Bright, airy, and cheeky as ever, “Whenever You’re Ready” is still the end of… well, everything. 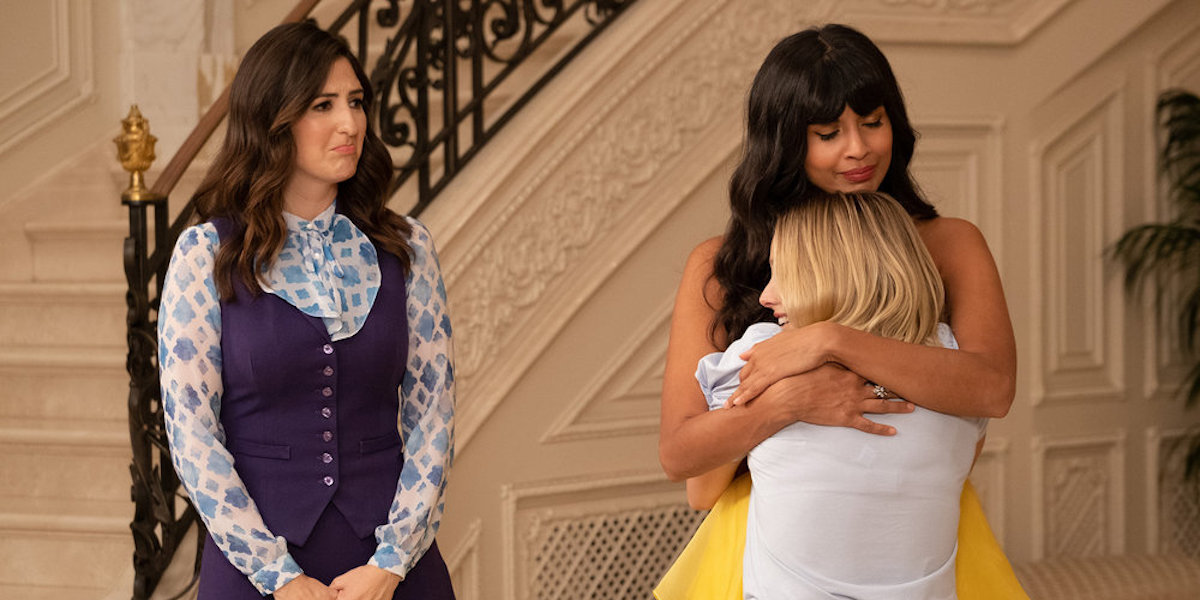 Chidi is perhaps the most stinging example of the inevitability of grief. He is the third member of the Soul Squad to decide to leave, and the character for whom it becomes most clear that staying when one feels they ought to go can be a profound torture. It’s almost less in the dialogue than it is in Chidi’s body language; he is no longer the stiff and quirky academic, or the the relaxed, fully-integrated Chidi. He seems tense, frustrated, limned with an anhedonia that is, in the most literal understanding of the word, existential.

Eleanor’s eminently-understandable-but-misguided attempt to pull Chidi back from the brink is agonizing to watch, possibly the saddest sequence in the entire series. It’s one thing to accept gentle sadness in the Good Place, another to witness Eleanor’s desperation, the old, long-vanquished loneliness of her living existence rear its angry head again.

But as uncompromisingly sad as it is, the ballad Chidi and Eleanor wraps up with a particularly elegant swish of show runner Mike Schur’s pen — Eleanor’s passion for philosophy, thanks to Chidi, is what ultimately allows her to let him go. Chidi reciprocates by offering comfort in the form of a Buddhist view of death; the ocean wave, existing, and then rejoining the sea. 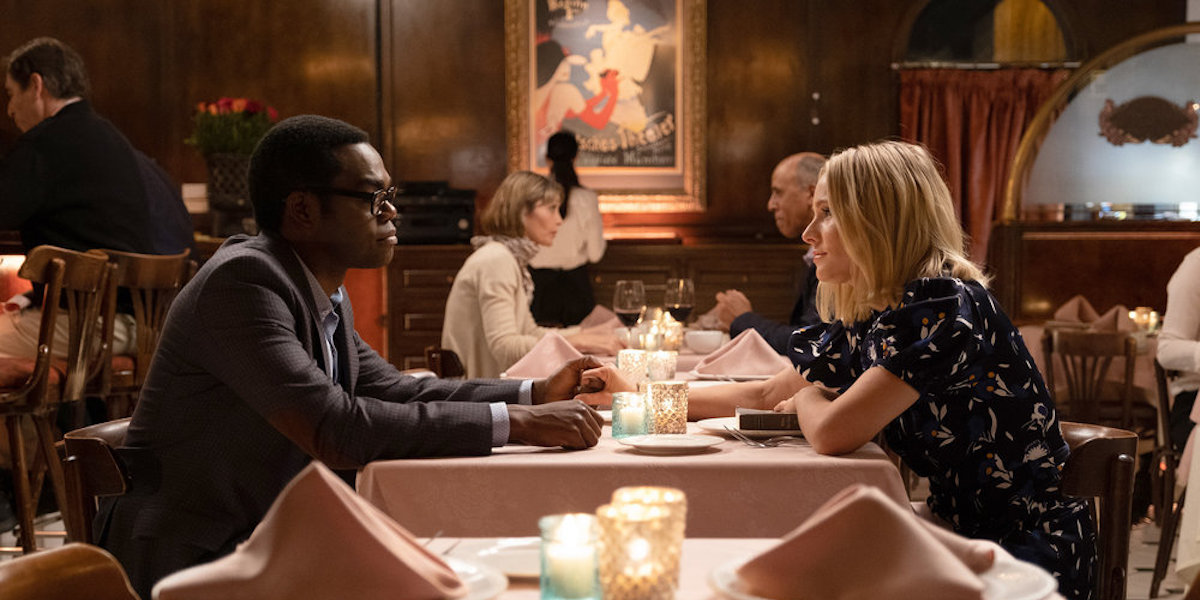 In a sweet twist, Jason’s ending echoes links back to both this form of spiritualism and his own faux-origins as a Buddhist monk. Waiting peacefully in the forest to return his remembrance necklace to Janet, he proves that with the right attitude, remaining in paradise when you intended to leave isn’t hell for everyone.

And if The Good Place series finale is largely about death, it also offers a profound view on life. With Chidi and Jason gone and Tahani working as an Architect, Eleanor dedicates herself to finding her own conclusive satisfaction. She wants to want to go, but this once-astonishingly-selfish human being can’t feel complete. She is still missing that which made her such a creature on Earth — connection and generosity.

So Eleanor seeks these things out. First, she coaxes Mindy St. Claire along the road to paradise, convincing the legendarily mediocre Mindy to take a chance on the test that can eventually land her in heaven. And even more significantly, Eleanor is moved by Michael’s want of purpose to suggest a radical new option to the Judge: Michael, immortal and dedicated for eons to humanity, can only be fulfilled by the ultimate embodiment of that dedication: Becoming human himself. 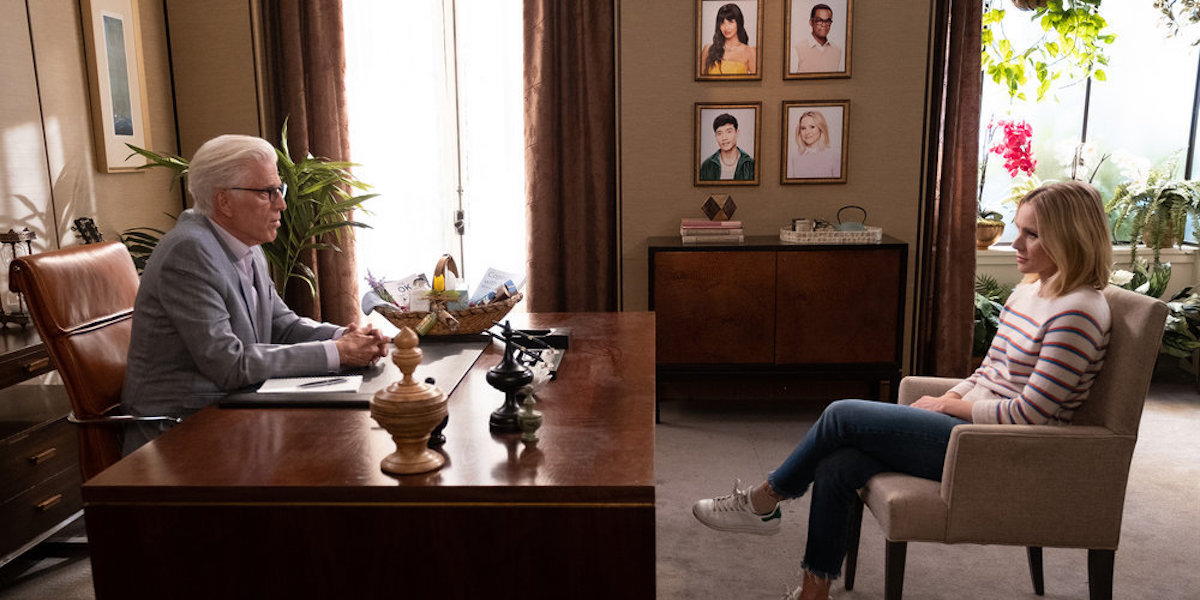 The Judge grants her request and as Michael accepts this unprecedented gift with profound joy, the circle of The Good Place is complete — and so is Eleanor. Now it is Michael who is human, sweetly muddling his way through the utter mundanity of life, doing the imperfect best that most humans try to do. And now it is Eleanor who is the eternal being, architecting Michael’s new existence and finding her final purpose in that act.

And even though Eleanor choses to end her time in the universe with this last gift, and even though, in an unknowable quantity of Bearimys ahead Michael will probably do the same, the bond between them endures. The last sparks of Eleanor are present when a neighbor decides to perform a simple act of kindness for Michael; and it is her words, “Take it sleazy!” that Michael speaks to end that interaction and The Good Place.

It may be, The Good Place posits, that nothing truly lasts. It may be that we are destined to find the end of happiness, and doomed never to discover the moral keys that can unlock humanity’s goodness. But at the same time, there are things we cannot know; as Michael says, what could be more human than the enduring question of the end?

Maybe Chidi and Eleanor still exist in harmonious sparks of gold. Maybe Jason is reborn into Michael’s dog. Maybe this whole adventure is still extant as Janet lives in her a-linear experience of time.

We don’t know for sure; we can’t. But as the last door closes on The Good Place series finale, I think we know enough.

What did you think of this forking finale?