What happened on ‘The Good Place’ season 4, episode 12?

The Soul Squad ascends to the Good Place and Janet downloads everything there is to know about heaven. She informs them that once they adjust to the brain-exploding amazingness, they will each be thrown their perfect party. The humans are delighted by all the Good Place has to offer, and Chidi freaks out when Janet tells him that (while most of his favorite philosophers are back in the Bad Place) Hypatia of Alexandria has made the cut and he can speak with her soon. 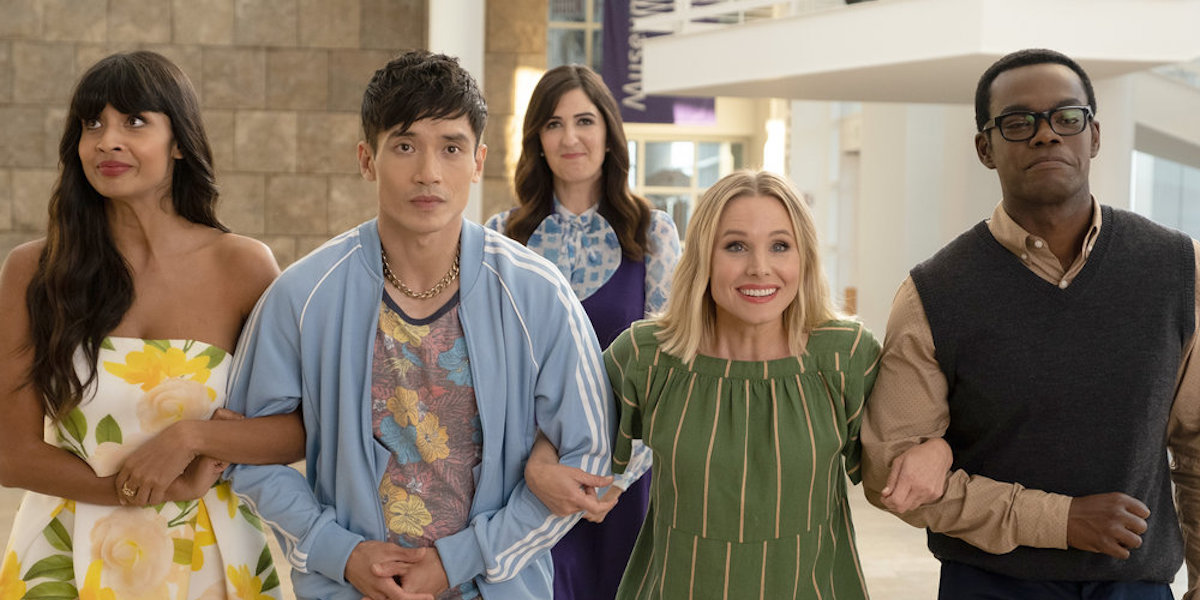 Michael is anxious about being in the Good Place as a demon, but the Good Place committee welcome him and take him to be inducted as an official Good Place architect. The humans walk through the party portal together, leading to a party that is a mashup of their four essences which Eleanor declares “perfect.” Jason races off to road-race monkeys, while Eleanor and Chidi locate Hypatia.

Michael is sworn in to the Good Place, confident that he has found his new purpose. But he gets more purpose than he bargained for when the other architects bolt, leaving him alone and in charge of heaven.

The issues become clearer when Chidi and Eleanor find Hypatia of Athens (“Call me Patty,” she says) and the once-genius has trouble even remembering the word of her old dialectic passion. “You gotta help us,” she tells the two. “We’re screwed!”

It turns out that the Good Place is, in fact, paradise — but existing in a constant state of paradise isn’t all it’s cracked up to be. Eventually, too much of a good thing turns the residents of the Good Place into happiness-zombies; feeling pleasure technically, but not really feeling much of anything. 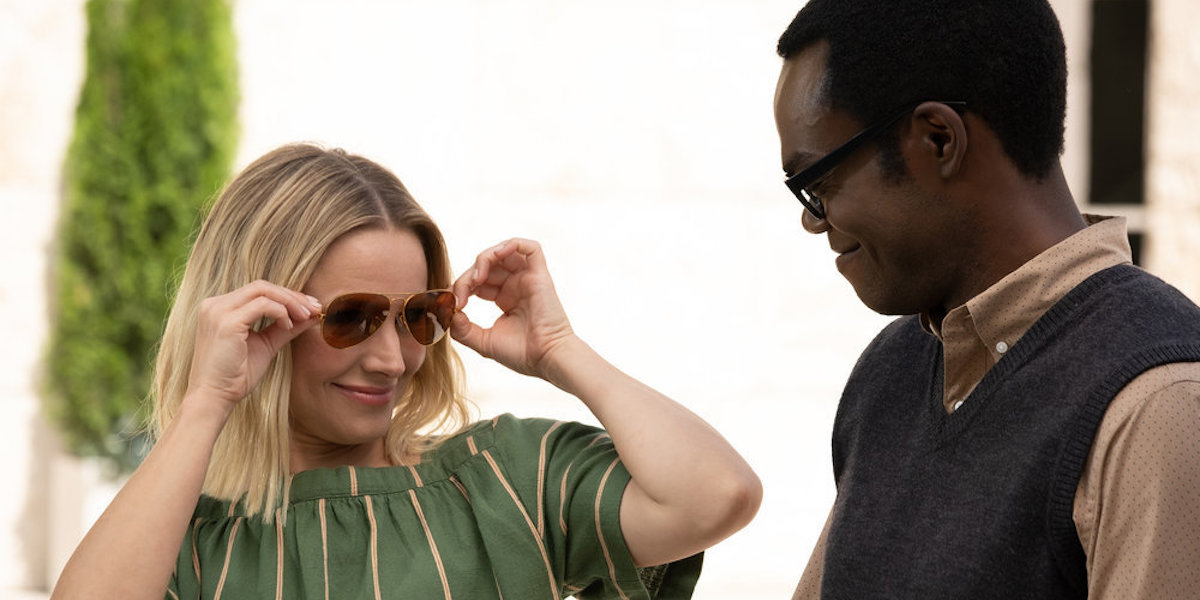 Learning that Michael has been left holding the ball, the Soul Squad resolves to figure out a solution. Eleanor proposes a bittersweet plan: If life is sweet because it is limited, then the Good Place must be the same. They need a way to let people end their time in heaven.

Back at the party, the Soul Squad presents the new option: A peaceful door, through which they can leave the Good Place, ending their time in the universe. The group admits that they don’t know what will happen when people go through the door — but “When you’re ready, walk through one last door and be at peace,” Michael says.

The plan is an immediate success, injecting the party with life and energy. Chidi thanks Patty for saving them, but she points out that it was Eleanor, Tahani, Janet, Jason, and Michael who saved eternity with Chidi.

The Soul Squad goes to their new perfect homes, and Eleanor and Chidi watch the sun set together, content in the time they have together.

The Good Place season 4, episode 12 represents some of the best that this quirky series has to offer — amidst its bright colors and humor, essential, beautiful, and even tragic human truths surface like seashells after the tide. Even after the Soul Squad has won the game and landed in the Good Place, there is still work to do; “Patty” is, somehow, not the end of this story. 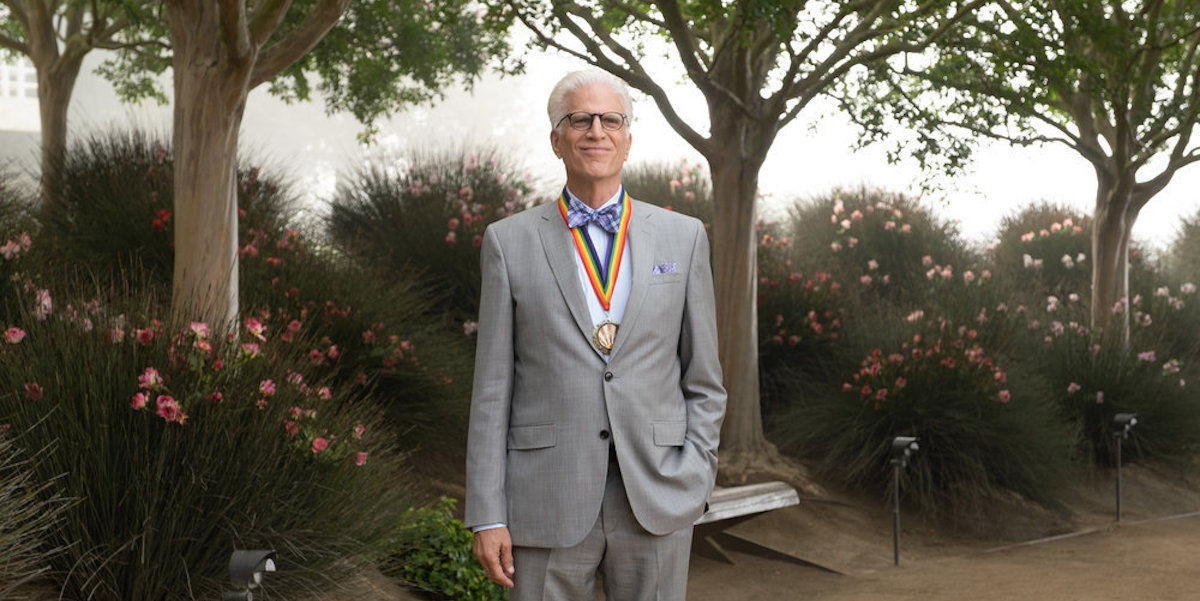 Last week’s episode felt like a conclusion, as the Soul Squad finally ascended to their long-sought heaven. This week’s bittersweet installment feels even more like a finale, but it too is just part of the acceleration toward next week’s mysterious end.

That means that fans, like the zombified ecstatics of the real Good Place, are left with a rather hazy prospect of what comes next. Even Janet doesn’t know what waits on the other side of the door that ends the divine existence, and short of more problems arising in their newly-repaired paradise, it’s hard to imagine what the finale will hold for our heroes.

When The Good Place and the Good Place have nothing left to offer, what remains? What is left to experience when all has been experienced, and the time comes for nothingness?

I realize that this is a somewhat gloomy reflection on an episode that ends, finally, in genuine bliss for all of the souls involved. But in a way, that’s an apt lesson to take away from The Good Place season 4, episode 12. After all, Eleanor’s observation that inevitable loss is what allows for human happiness proves to be the agonizing key to solving the dilemma of eternity.

The only way to fix the Good Place is to break it.

Always eager to explore the sublime heights of human moral capacity, The Good Place here embraces human imperfection, adapting paradise to the fundamental brokenness of real people. To admit that there can be — and really, must be — a limit to happiness is quietly, shatteringly sad; but it’s also an appropriate way to usher in the equally inevitable end of this series.

Tellingly, and perhaps a little ominously, The Good Place series finale is titled “Whenever You’re Ready” — an echo of Michael’s words when introducing the final door. It seems not-at-all-unlikely that one, or all of Soul Squad will eventually chose to walk through the last door, though the circumstances remain unclear.

Will our heroes simply tire, slowly, of heaven? Or is there one last bittersweet reckoning to come, now that life, the universe, and Eleanor and Chidi’s relationship have seemingly been resolved?

We’ll know all too soon. For now, let’s enjoy paradise.

Tahani: I feel just like Dorothy when she landed in Oz! Excited. Incredulous. Much taller than everyone else around me.

Chidi: Hypatia! I’m going to ask her so many questions pertaining to grand ideas about the universe! Like, why? Oh, and also, how?

Tahani: One could walk amongst the dinosaurs or witness the very first production of Hamlet at the Globe Theater!
Jason: I’m gonna go Tokyo drift with monkeys! See you in a thousand years!

Eleanor: This room is filled with some of the most interesting people that ever lived. Chat them up, learn about their lives. Then meet back here so that we can make of them.
Tahani: Eleanor Shellstrop, I have been training for this day my entire life.

Eleanor: First question, how do you get the ‘of’ in your name? Is it just like, where you hung out the most? Like, am I Eleanor ‘of’ The Cheesecake Factory bar?

Paltobal I helped the poor in ancient Phoenicia.
Tahani: Excellent! I once had a SoulCycle instructor named Phoenicia. How did you… die?
Paltobal I got a cut on my hand. The year was 2491 BC, so that’s pretty much all it took. You got a cut or you drank water that wasn’t hot enough, and then boom. Dead. I would have killed for a vaccine. Any vaccine. It’s crazy that you guys just don’t like them now.

Eleanor: I’m not just gonna sit back and turn into some slack-jawed, sweatpants-wearing orgasm machine! Oh my god, I’m describing my dream existence like it’s bad, what is wrong with this place?

Michael: You said that every human is a little bit sad all the time, because you know you’re going to die. But that knowledge is what gives life meaning.
Eleanor: The way to restore meaning to the people in the Good Place is to let them leave.

Chidi: This is what we’ve been looking for since the day we met. Time. That’s what the Good Place really is — it’s not even a place, really. It’s just having enough time with the people you love.
Eleanor: You’re right. And we have as long as we want. If you keep hogging this blanket, I’m probably going to walk through this door in like three days, though.