‘The Good Place’ season 4, episode 5 review: Not the demons you’re looking for

‘The Good Place’ season 4, episode 5 review: Not the demons you’re looking for

“What in the name of Kevin Spacey’s self-made Christmas Eve video message to try and get back on House of Cards is going on here?”

After last week’s cat-and-mouse adventures, The Good Place season 4, episode 5 takes a different approach to the moral arcs of its most insecure main characters.

What happened on ‘The Good Place’ season 4, episode 5, ‘Employee of the Bearimy’?

In the Bad Place, an imprisoned Janet insists that Michael and her friends will prevail through goodness and empathy. Shawn and Vicky-in-the-Michael-suit are confident that no one will save her.

On their way to save Janet, Michael gives Jason back all of his memories. When they arrive in the Bad Place, Jason worries about the state of his and Janet’s relationship, while Michael is haunted by the memories of his unreformed self. The pair stumble onto “DemonCon,” and Michael strolls in, pretending to be Vicky-as-Michael. Shawn presents the skin-suit as “Torture 2.0,” and Michael “presents” a new “Jason suit,” allegedly with Glenn inside. 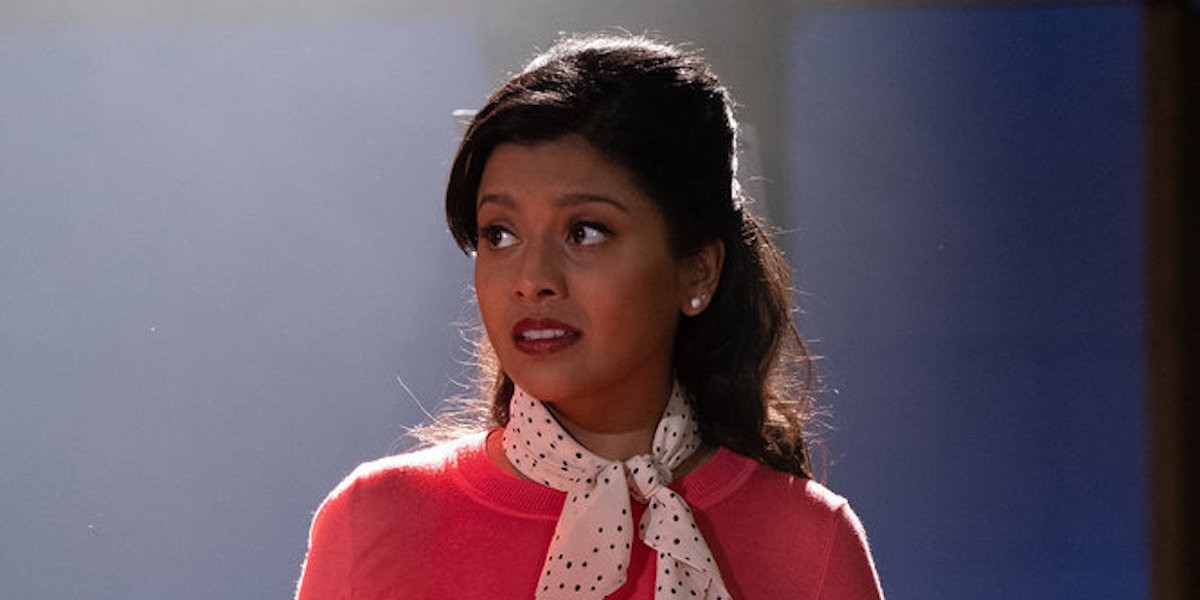 Michael proposes that they torture Good Janet in her cell, but Shawn brings her out to demonstrate the effectiveness of the skin-suits. Jason professes his love for Janet and the charade fools the demons, but just when they are about to escape, Vicky flounces onstage in the Michael suit. Michael confronts Shawn with his meddling in the experiment. Brandishing the demon-exploder, Michael implores the demons to realize that humanity and even demonkind can change for the better, like he has. Vicky scoffs at this, insisting that she knows the darkness inside Michael that will never go away… but he explodes her, and Michael, Janet, and Jason make their escape.

Back on the handcart, Michael admits that confronting his former self was very difficult for him. Jason says he doesn’t need to feel any shame — Michael isn’t a demon anymore. Janet thanks Jason for rescuing him, and softens the blow of the Jaguars cutting Bortles with the news of Nick Foles as his replacement.

Meanwhile, in the Good Place: Eleanor copes with the lack of Janet-magic by sending Chidi, Simone, John, and Brent on a lake house vacation, assigning Tahani to host. Derek promises to keep the neighborhood running while the humans are away. Looking to be more useful than just a party-thrower, Tahani decides to hunt down Chidi when he does not to show up at the house. 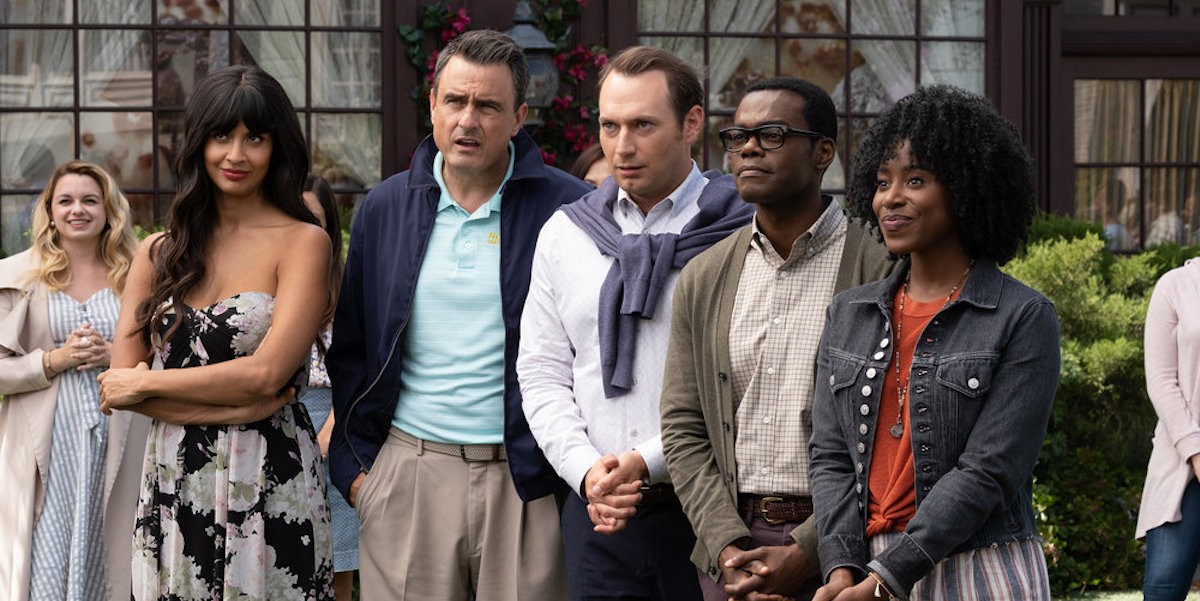 Derek quickly loses control of the neighborhood, sending the fake residents into states of wild malfunction. Eleanor is horrified to learn that Chidi is still there and sends Tahani back to the lake house. Upset, Tahani speaks to Derek and suggests that he reboot himself to get a better handle on things. He does so, and the residents collapse en masse.

Tahani is distressed that she’s ruined things, but Eleanor convinces Chidi that the whole plan was meant to get him to try new things. She asks if he trusts her, which he heartily affirms, and she and Tahani (who cannot play it cool for her life) lead him blindfolded to the lake house, Chidi is thrilled to see the beautiful surroundings and kisses Simone.

Tahani resigns herself to being the party-thrower, which she sees as useless in contrast to the endlessly capable Eleanor. Unimpressed, Eleanor assures Tahani that her parties are incredibly important for the group, and therefore humanity. Tahani is mollified — though she does want to pick up some more practical skills should they survive the year of the experiment.

The Good Place‘s streak of near-perfect episodes falters a bit in “Employee of the Bearimy.” Perhaps because the story splits Michael and Eleanor after so long as bound companions, The Good Place season 4, episode 5 feels slightly less substantial than its predecessors. Leaning just slightly too hard on spectacle and a few granular elements of Tahani’s character, “Employee of the Bearimy” is by no means a bad installment; it just lacks the profound heft that this superb series usually delivers.

Resolving personal insecurities is the name of the game in The Good Place season 4, episode 5. For Tahani, this means that her role as hostess is, rather suddenly, unsatisfying to her. It’s not that this is unbelievable — after all, Tahani’s earlier realization that rejecting superficiality and cynicism is the way to true contentment and goodness does make party planning seem a little extraneous in the grand scheme of the universe. 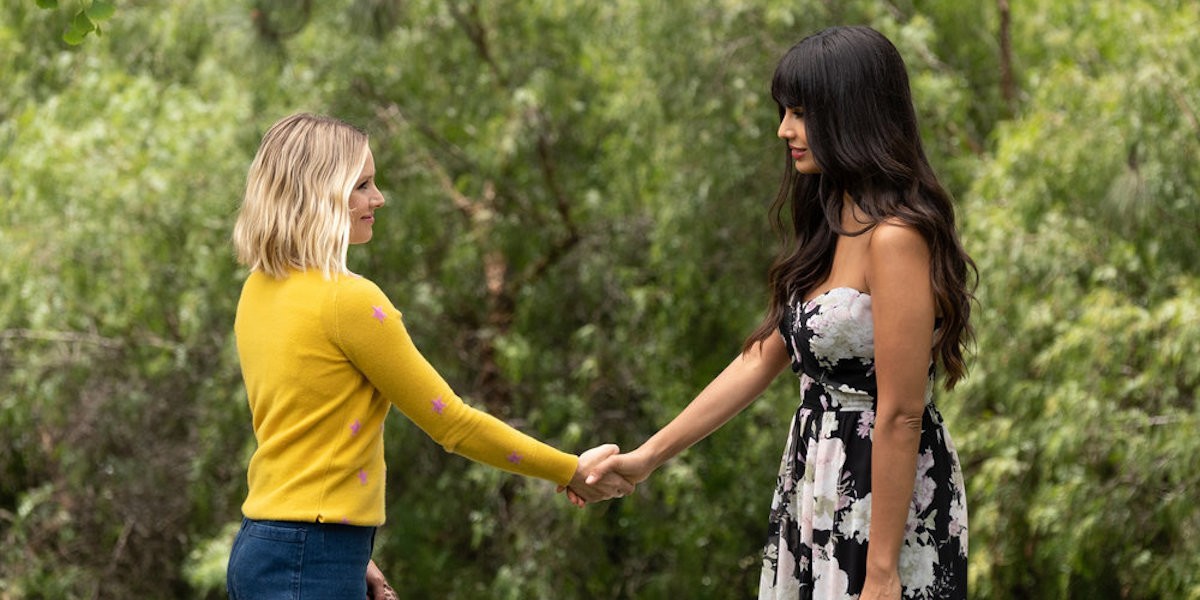 But it’s a bit of a sudden shift for Tahani, who has, on her path to enlightenment, usually been good at separating the truly superficial from the things that make her happy. The resolving dialogue with Eleanor is certainly sweet (and a moment between the two friends has been long overdue this season) but it all seems a bit ‘much ado about nothing,’ unless Tahani’s promised welding skills come in handy later in the season.

Michael’s surreptitious journey into the Bad Place handles the theme of personal insecurity more deftly in The Good Place season 4, episode 5. The guilty deja vu that characterizes this return is easily relatable — Jason’s comparison to high school might have been silly, but it’s actually pretty apt. Michael is trying to “go home again” as a changed being, which is challenging in the best of circumstances — and a demon family reunion is not the best of circumstances.

Related: 34 The Good Place quotes to soothe your soul here in the Bad Place

Michael’s final confrontation with Vicky as she recounts his “true” nature is a bit brief (and resolved a bit easily) for the relaxed tone at the end of “Employee of the Baerimy.” Still, Michael’s struggle is well-realized, and it remains to be seen whether or not the specter of permanent improvement will be raised again — be it over Michael, the Soul Squad, or the hapless humans of the new neighborhood.

Plus, we’ve got real Janet back! Here’s hoping she kicks Bad Janet’s butt next week.

Jason: Wait, can I have all of my memories back again? I forgot most of them.

Tahani: In the words of my godfather, acting in what could only be described in hindsight as his most problematic role, ‘You da man now, dawg!’
Eleanor: As always, thank you for finding the quickest possible way to say things.

Tahani: I’d never serve finger-sandwiches at a lake house. I mean, what am I, Welsh?
Eleanor: Are you?? I don’t know. No… right?

Michael: It’s a version of me I no longer recognize. Behind that handsome smile was so much cruelty. So much pain inflicted on so many, with such glee. Shameful. What echoes of this former self await me here?
Jason: I feel you. It was always hard for me to go back to my old high school. So many memories. Also the junkyard machine crushed it into tiny cubes.
Michael: If we get out of here alive, remind me to re-erase your teen years.

Shawn: As you are all aware, our current system suffers from diminishing returns. Sure, the first time someone gets butthole spiders, he’s miserable. But soon, the humans get used to it — and worse, the spiders get bored.

Chidi: I’m just not a ‘new experience’ kind of guy. My comfort zone is basically like, that chair, and honestly? The arms are a little sharp.

Shawn: What in the name of Kevin Spacey’s self-made Christmas Eve video message to try and get back on House of Cards is going on here?

What did you think of ‘Employee of the Bearimy’?

National Coming Out Day: 20 queer characters who inspire us

by Jen Lamoureux
by Pamela Gocobachi