The moment you step into Star Wars: Galaxy’s Edge, you can almost hear Obi-Wan Kenobi murmuring, “You’ve taken your first step into a larger world.”

As a lifelong Star Wars fan, I actually lost my breath when I stepped around the corner of Star Wars: Galaxy’s Edge and into Black Spire Outpost, because right there in front of me was the Millennium Falcon herself. Life-sized, she filled the space as the sun shone down and every dream I had as a child (and an adult) about seeing the most famous ship in the entire Star Wars universe came true. 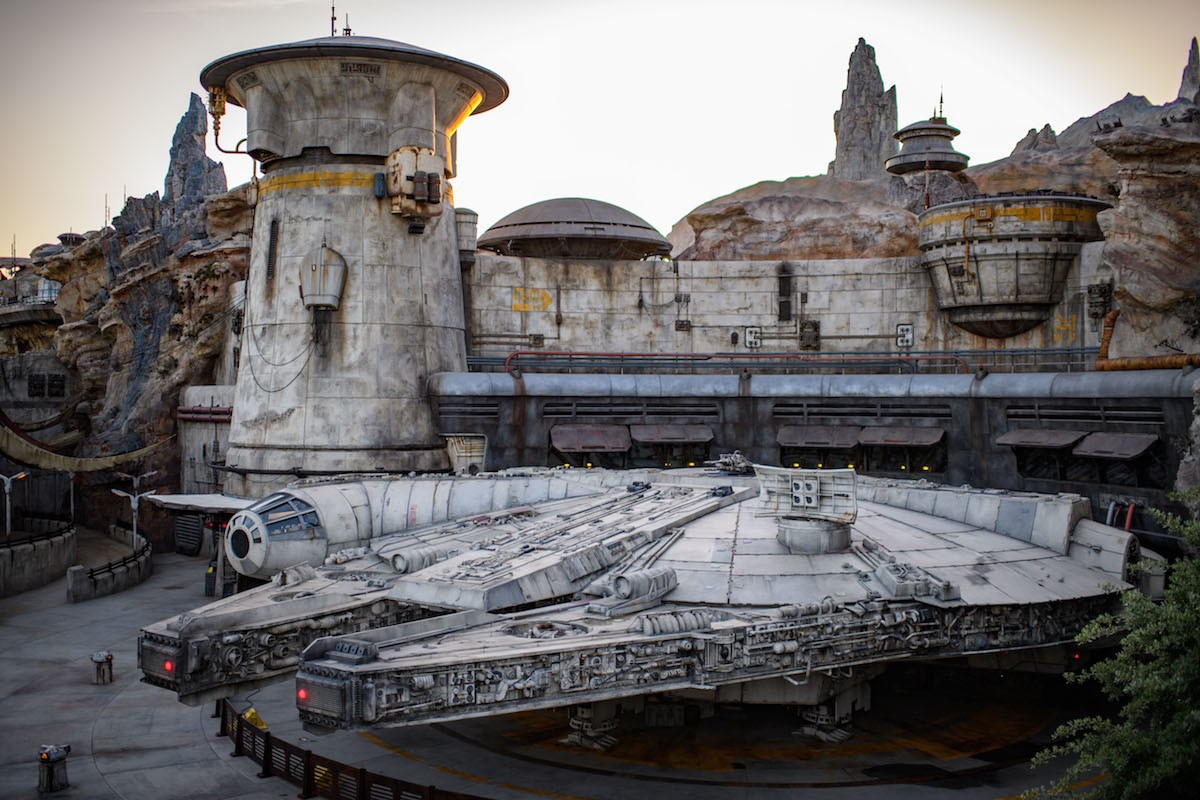 She’s truly gorgeous. It’s clear that no expense was spared. This Falcon is the real deal. You can get right up close to it. There’s no missing the detail and care that went into this build. From the look of it, it’s identical to the Falcon in the sequel trilogy, right down to the new communications dish. 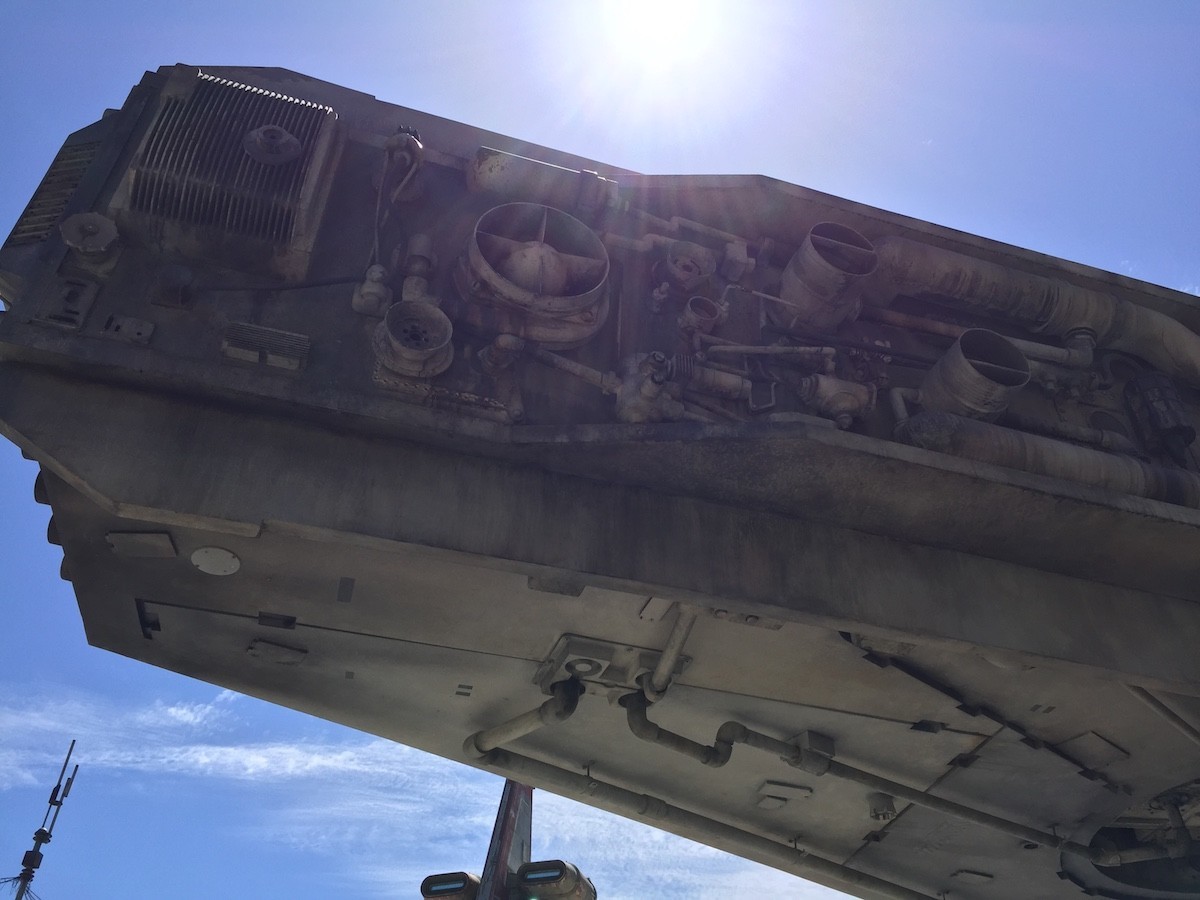 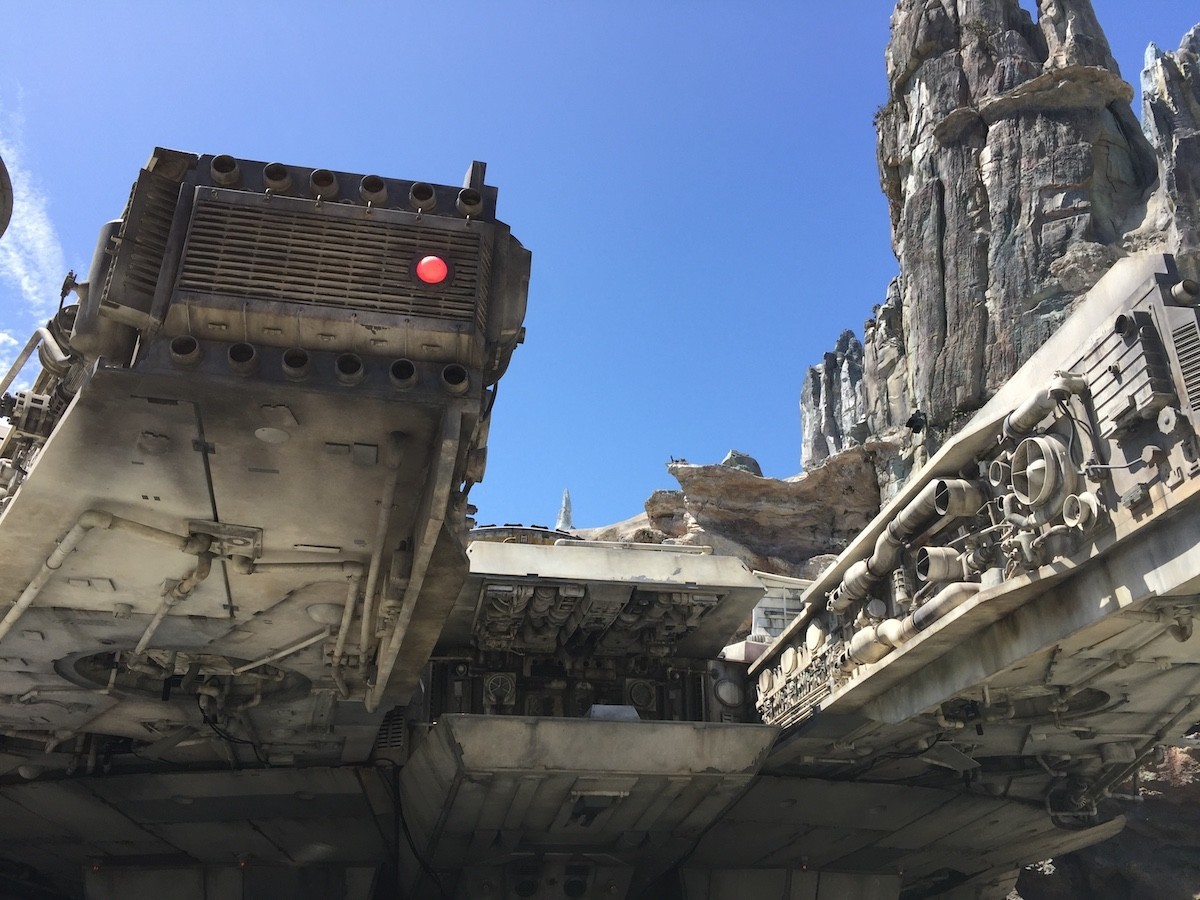 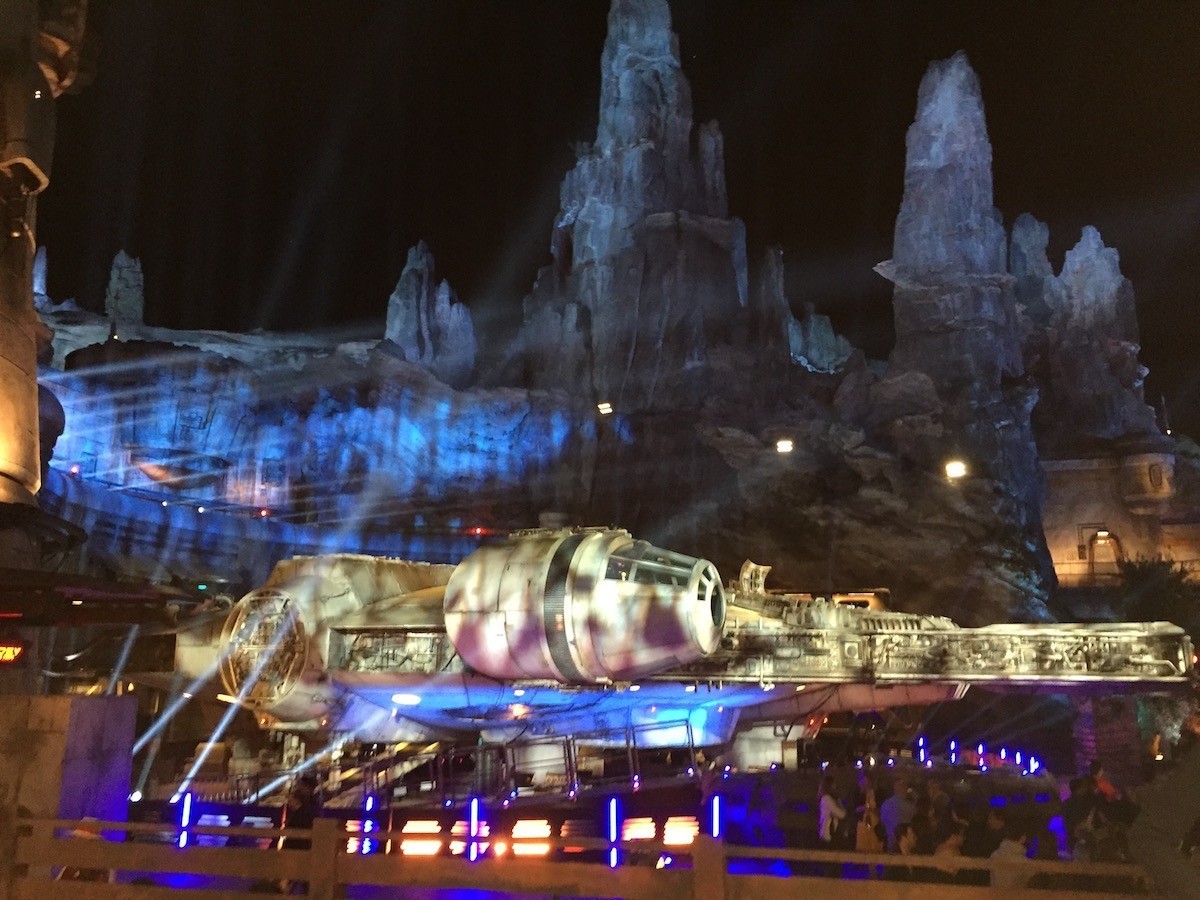 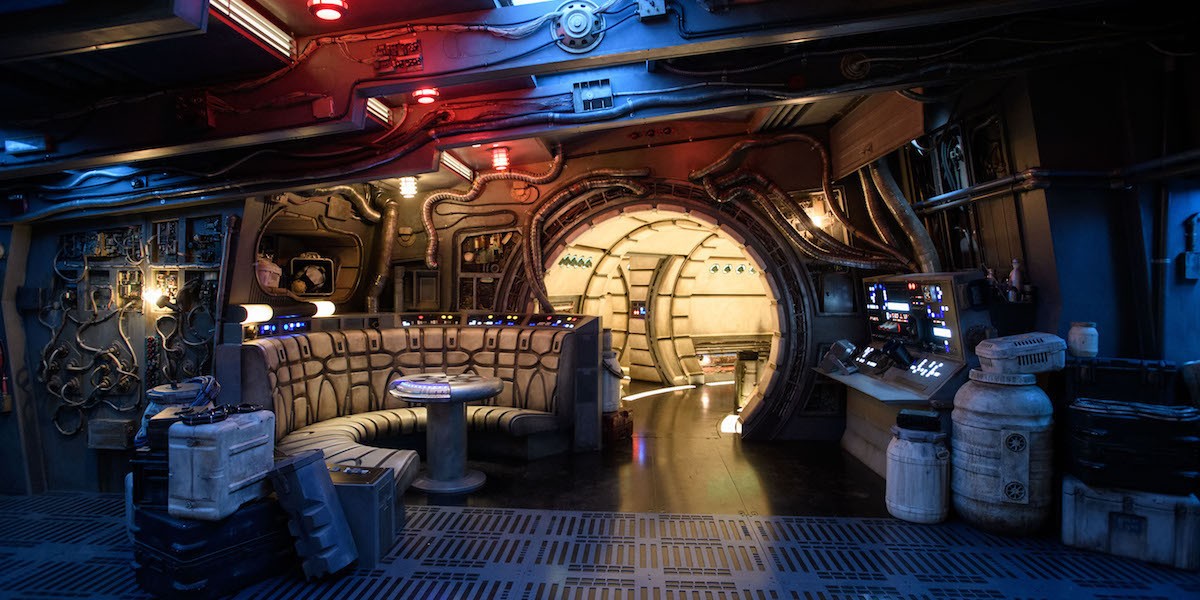 What has changed, at least here in Galaxy’s Edge, is who’s currently flying the Falcon and what sort of missions are being flown. You see, a rather infamous Weequay has “borrowed” the Falcon.

Once you enter Millennium Falcon: Smuggler’s Run, you’re assigned a role: pilot, engineer, or gunner. You’re also assigned a mission: Liberate cargo and bring it back to Hondo. Ohnaka’s deal is simple; you’ll be given a percentage of the profits minus the cost of any damages to either the cargo or the ship.

I was selected to be a pilot, and I am sad to report I came back owing Hondo money, but I say it’s not my fault (well, not entirely) because there are two pilots. One pilot moves the ship left and right, while the other moves it up and down. Let’s just say we hit a lot more things vertically than horizontally. Sadly, both pilots are docked as a team.

I have a feeling we’ll soon be seeing friends riding Millennium Falcon: Smuggler’s Run in groups of six with the express goal of making the flight as smooth as possible. You know Star Wars fans — they never can resist a challenge.

Immersing yourself in the world of Batuu

The entire outpost is gorgeous. Lucasfilm and Disney Imagineers worked closely together under the leadership of Vice President and Executive Creative Director of Lucasfilm Doug Chiang to bring an authenticity to Batuu and Black Spire Outpost that’s unlike any other place on Earth short of a movie set.

There's something about this shot inside #StarWarsGalaxysEdge that makes me so happy. pic.twitter.com/MU4LSDM7sr 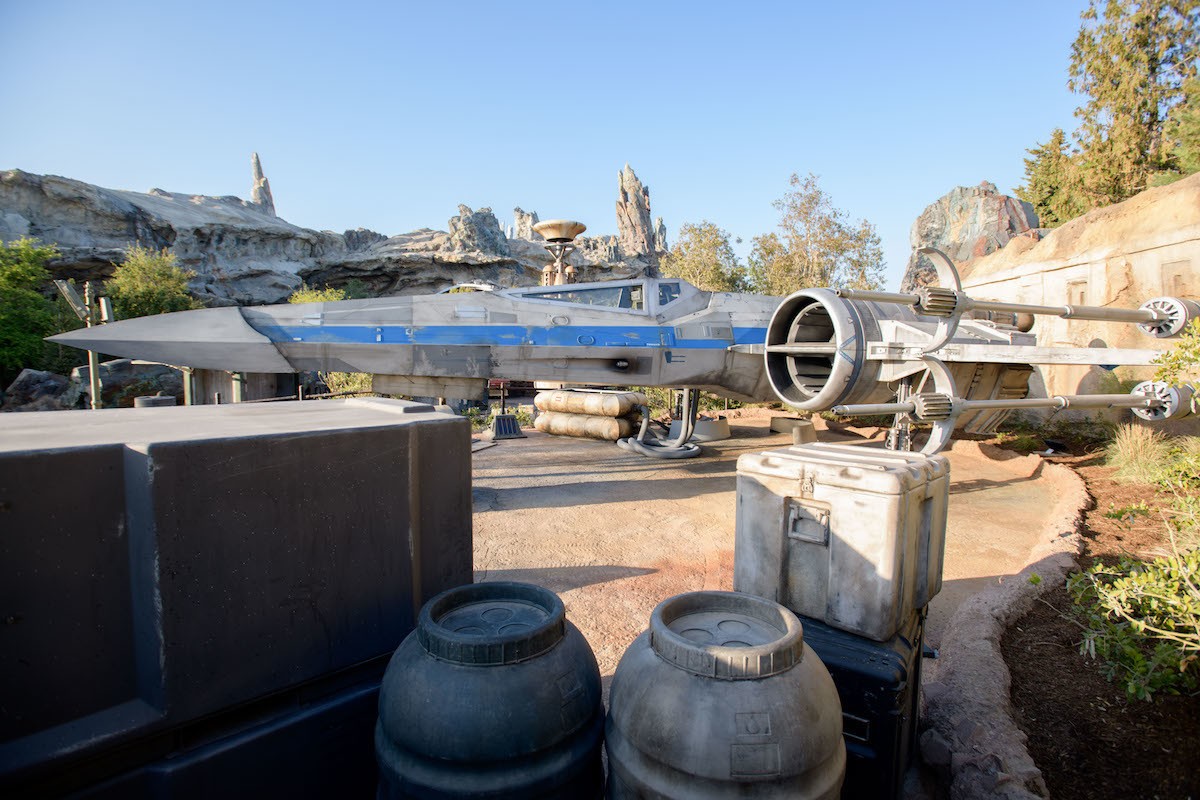 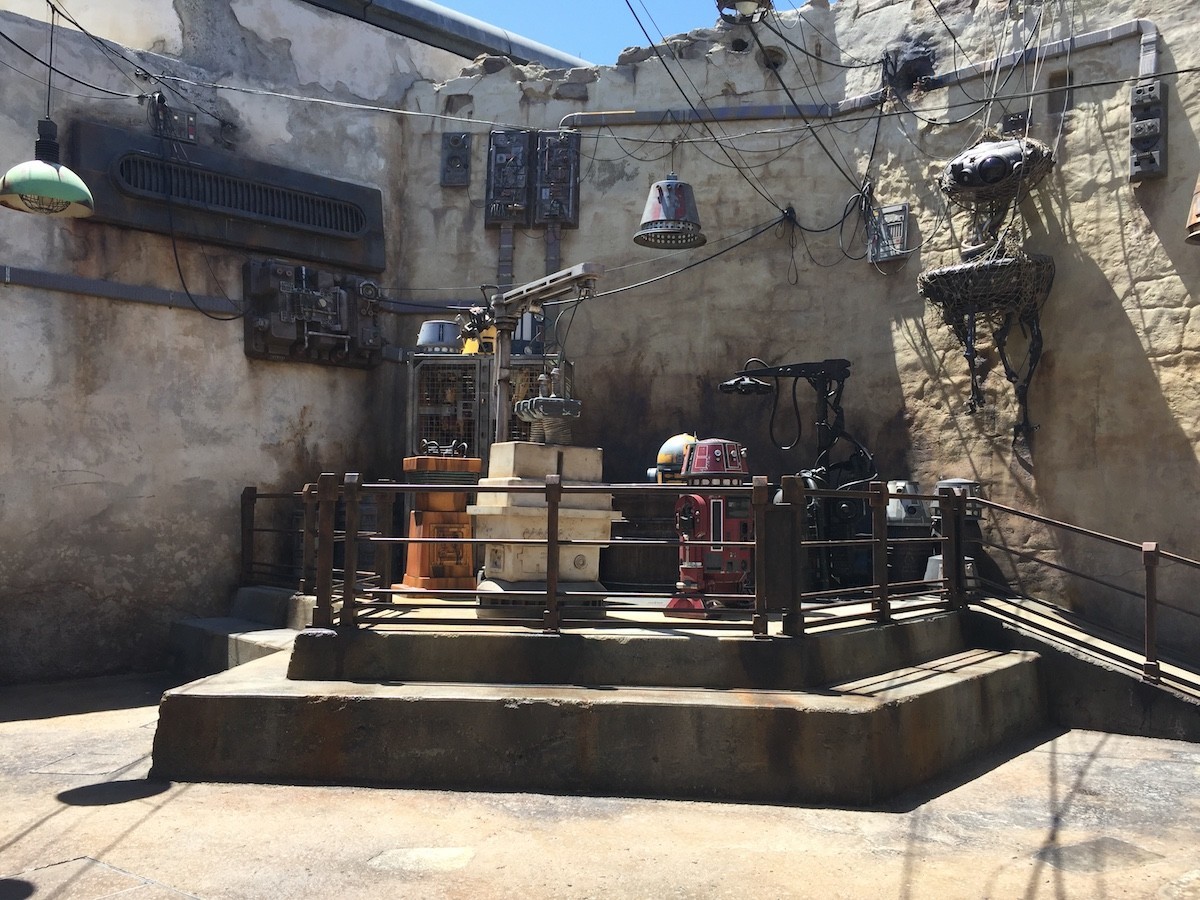 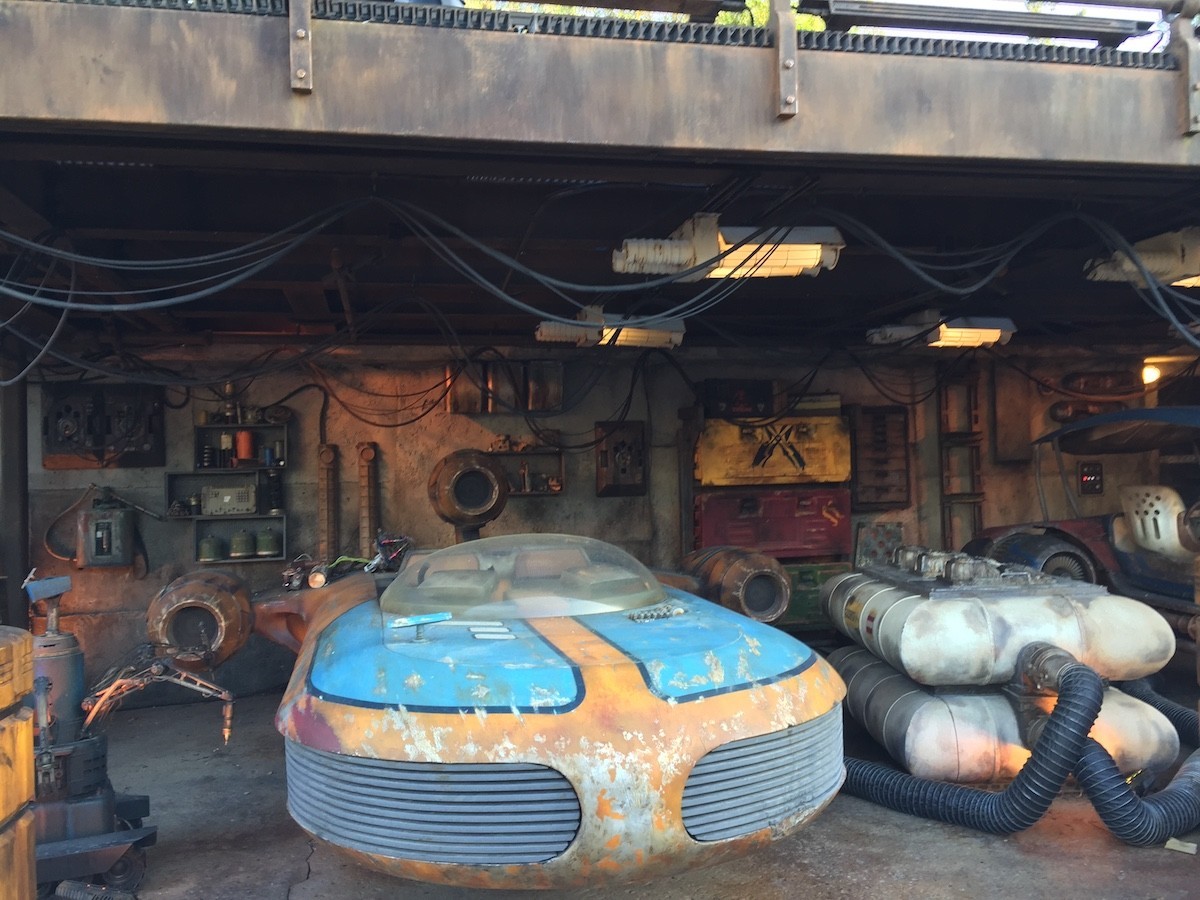 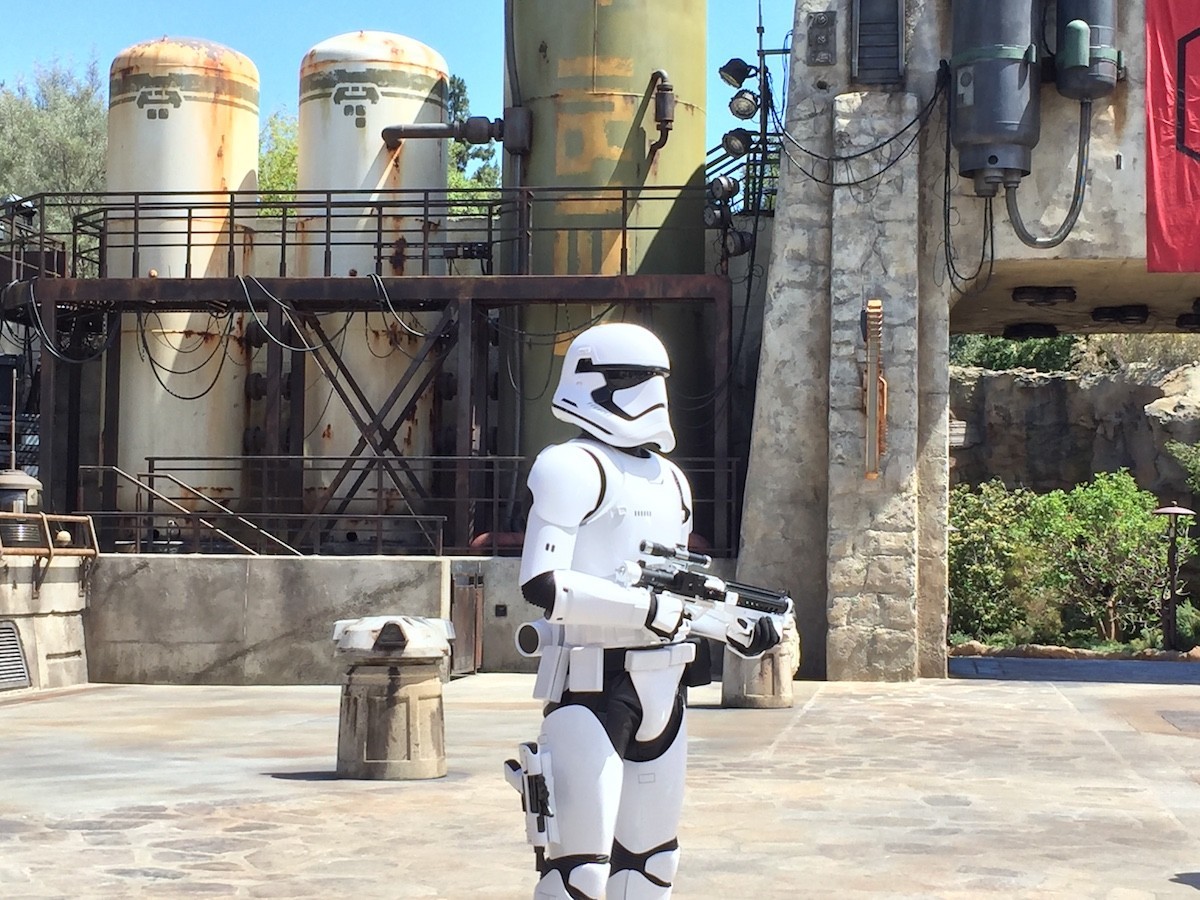 What to eat and drink when you’re in Batuu

There are lots of places to get tasty food around Black Spire Outpost. The most talked about food item while I was there was the Ronto Wrap from Ronto Roasters. It’s reminiscent of roasted pork and grilled sausage with a tangy slaw, and it’s perfect for a quick on-the-go meal. We also had a chance to taste a number of dishes from Docking Bay 7 Food and Cargo, including the Shaak Roast, Fried Endorian Tip-yip, and the Ithorian Garden Loaf.

I also recommend the Outpost Popcorn Mix at Kat Saka’s Kettle. It’s a mix of sweet and spicy flavors that really work together. As someone who appreciates a beer from time to time, I can tell you that it pairs really nicely with one.

However, the big attraction when it comes to nightlife even during the daytime is Oga’s Cantina. I have a feeling this cantina is going to be the most popular place in Galaxy’s Edge and not just because it serves alcohol. There’s also a local celebrity.

The cantina itself is beautiful. They have a variety of drinks, both alcoholic and non-alcoholic, which both taste and look good. The whole cantina is powered by a single source, and occasionally, something will shut down or overload. Next thing you know, someone’s up there banging away on one of the panels (because that’s how you fix things in the Star Wars galaxy, right?). I’m told the shutdowns can be caused by any number of things: the number of drinks served, power surges, or even Rex himself. It’s fun to watch what happens in this cantina which feels very like home to any Star Wars fan. 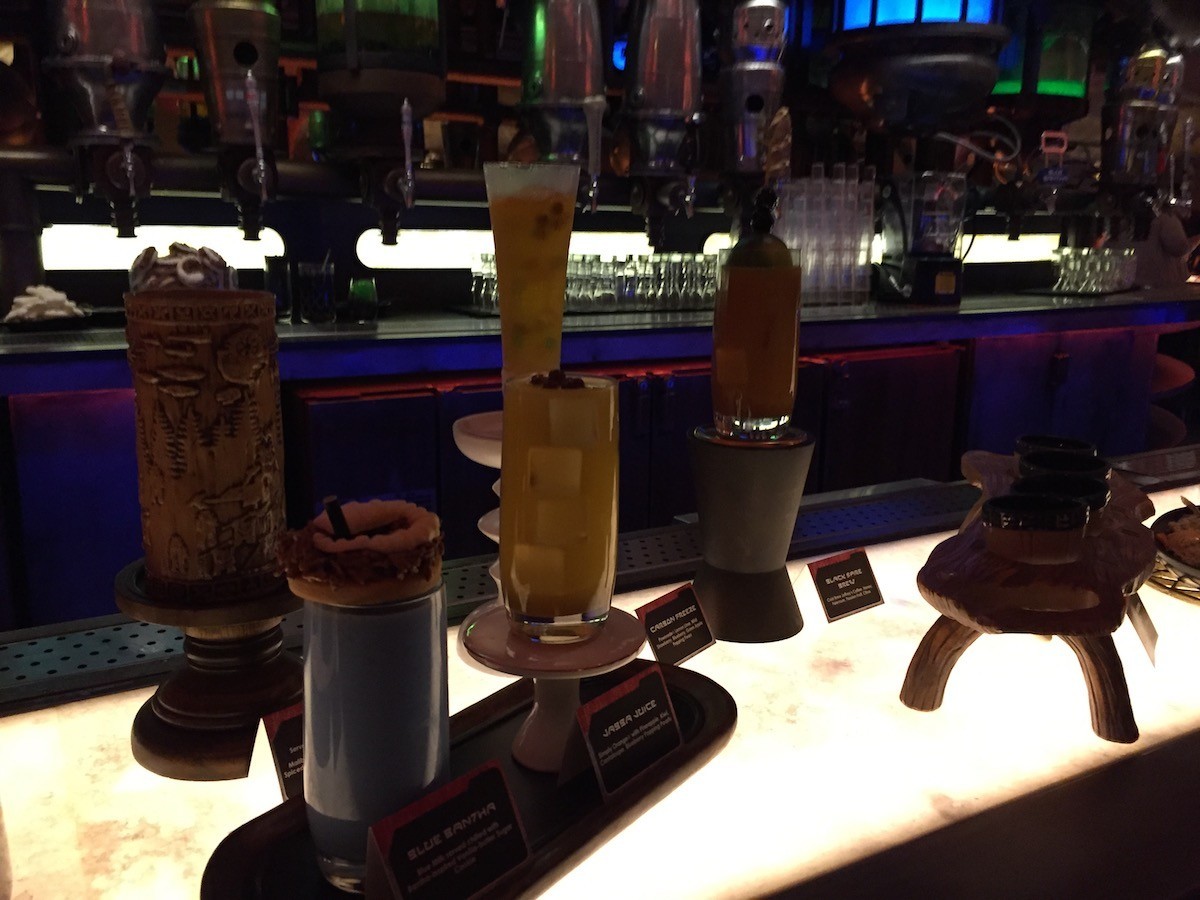 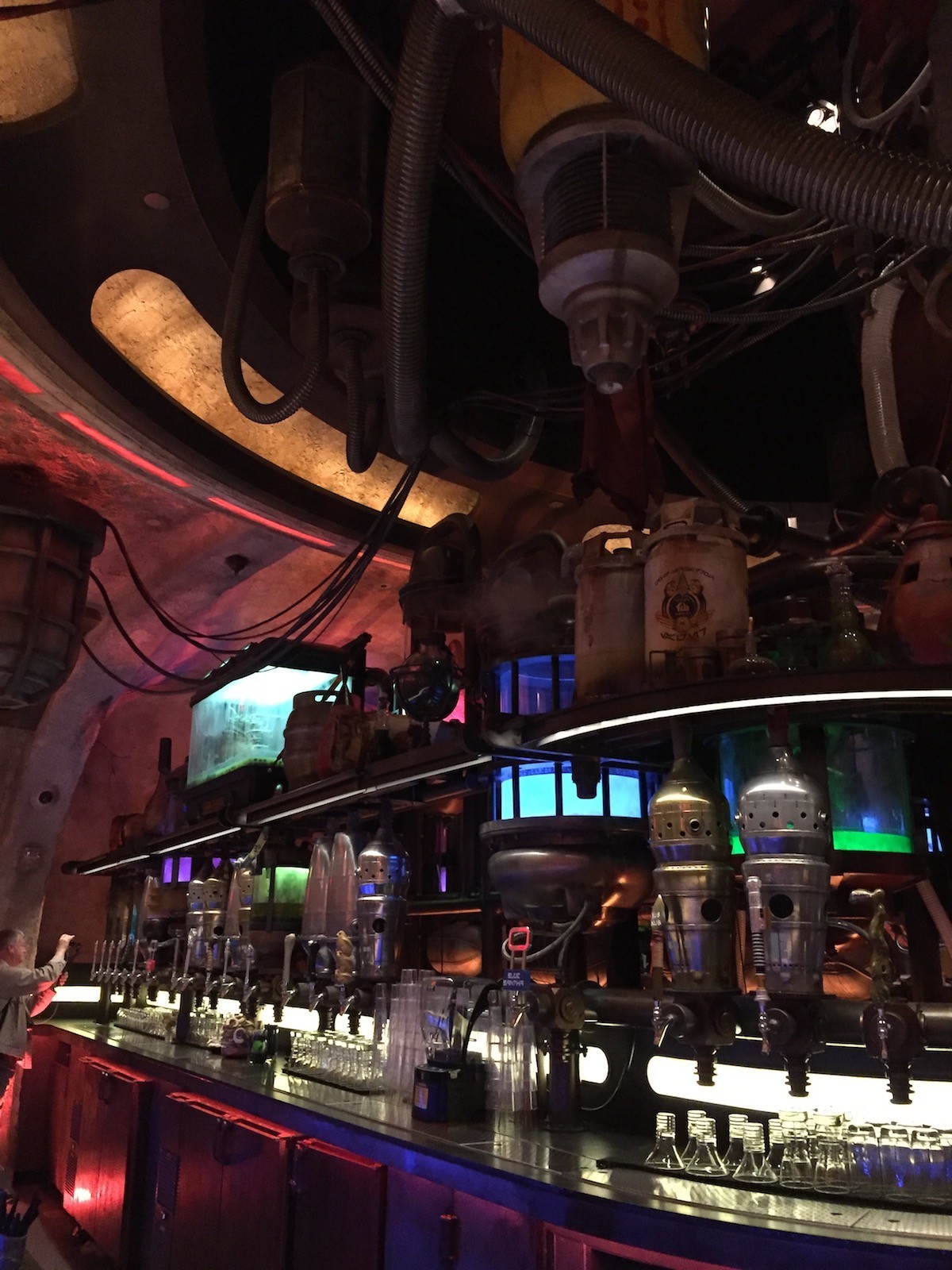 As night fell, whispers started around the land. Batuu residents and squad leaders made their way through the crowd whispering code words and gathering recruits for the Resistance. At first, we didn’t know why we were being asked to move to certain points within the land, but when you’re in Batuu, you play along. Soon, we found ourselves gathered together when something special happened.

Speaking of night falling, Batuu at night is breathtaking. There’s something about just sitting in the middle of this amazing place and looking at everything around you. It truly is magical. 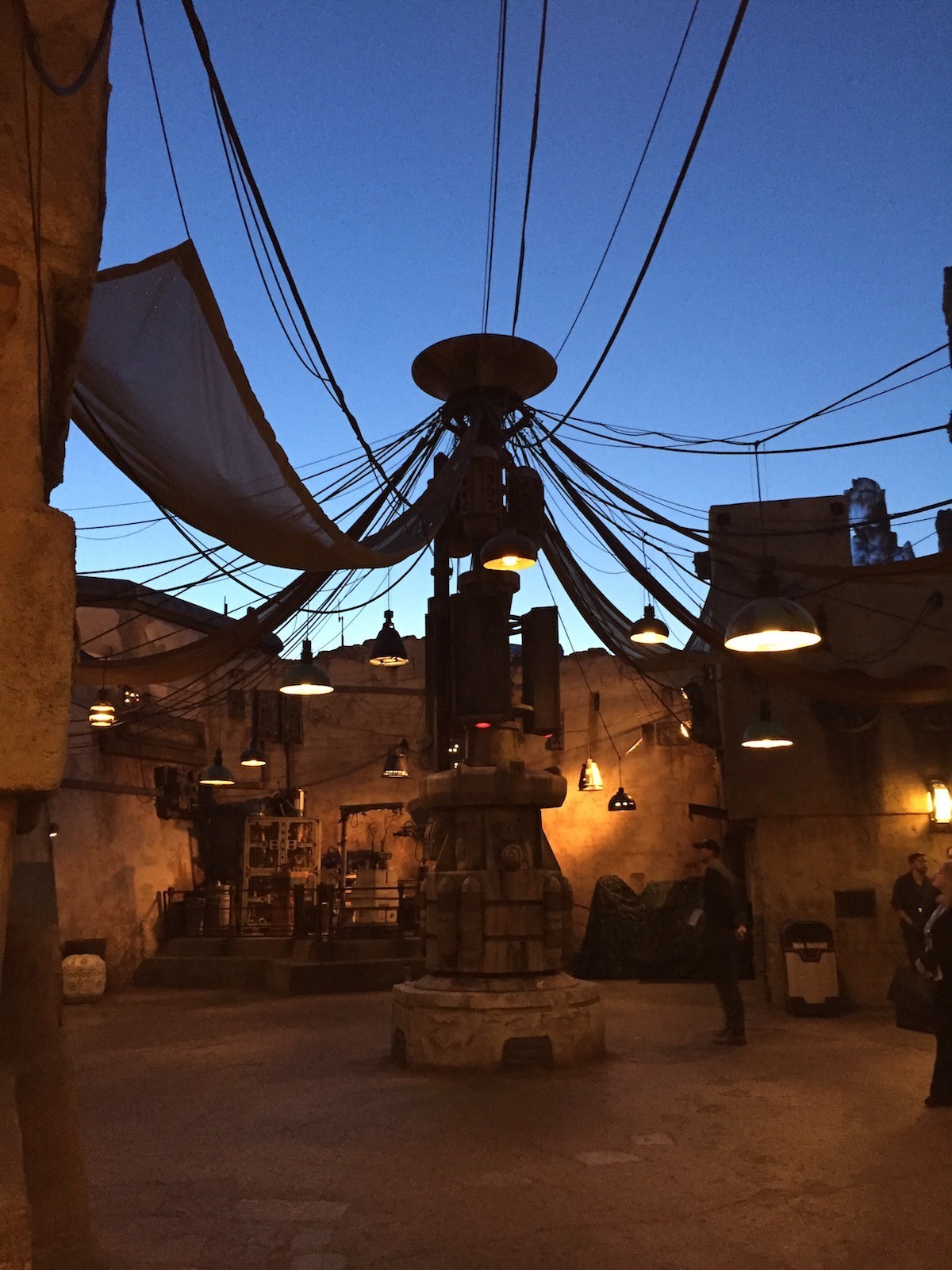 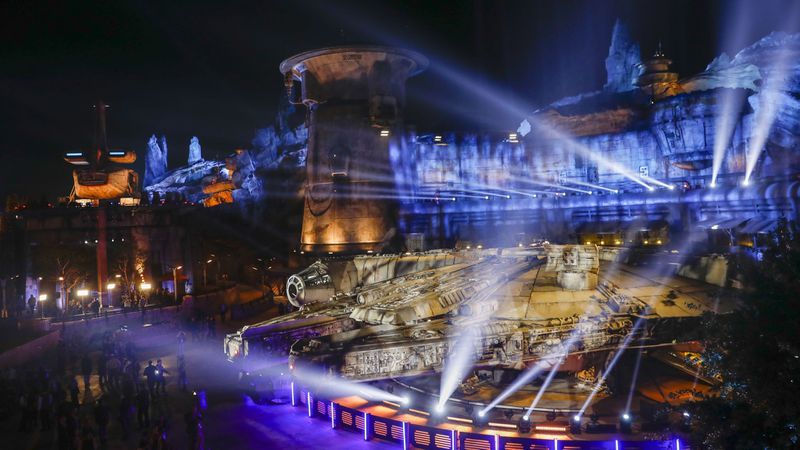 Shopping on Batuu is out of this world

Whether you’re looking for small plush items or the most valuable items in all of Black Spire Outpost, you’ll find something perfect. 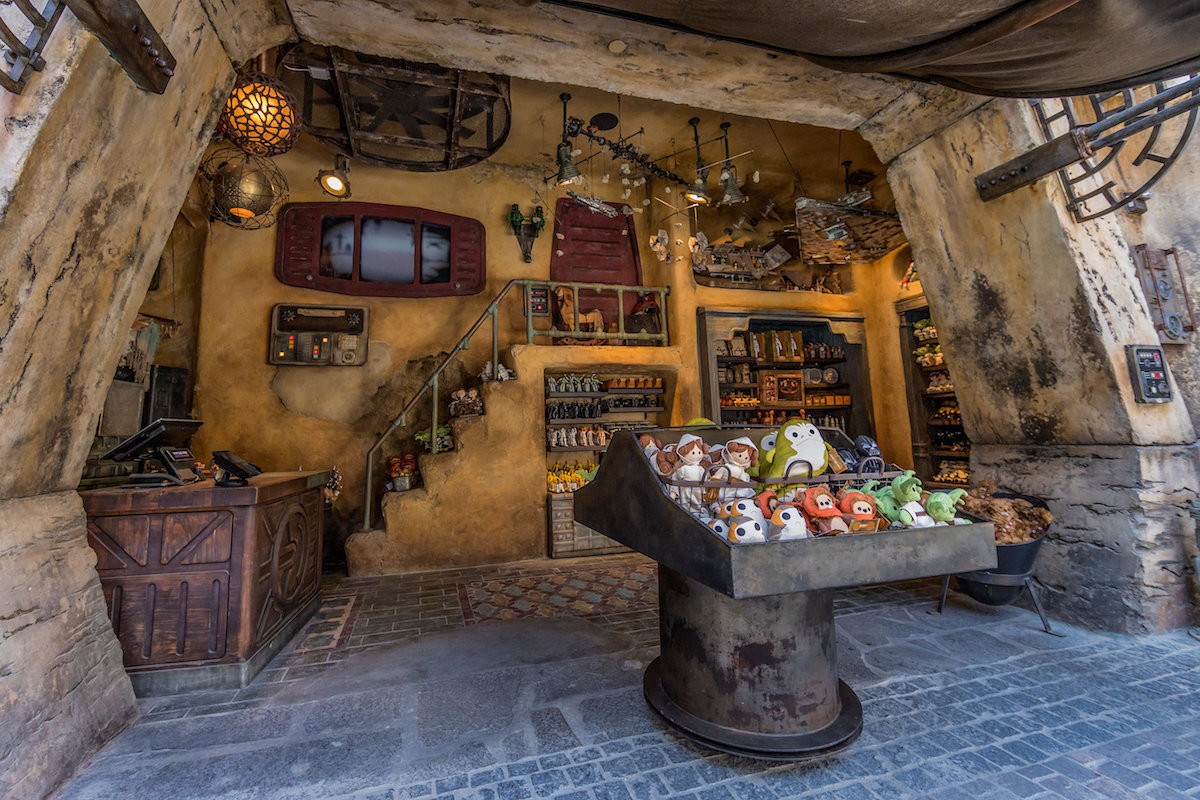 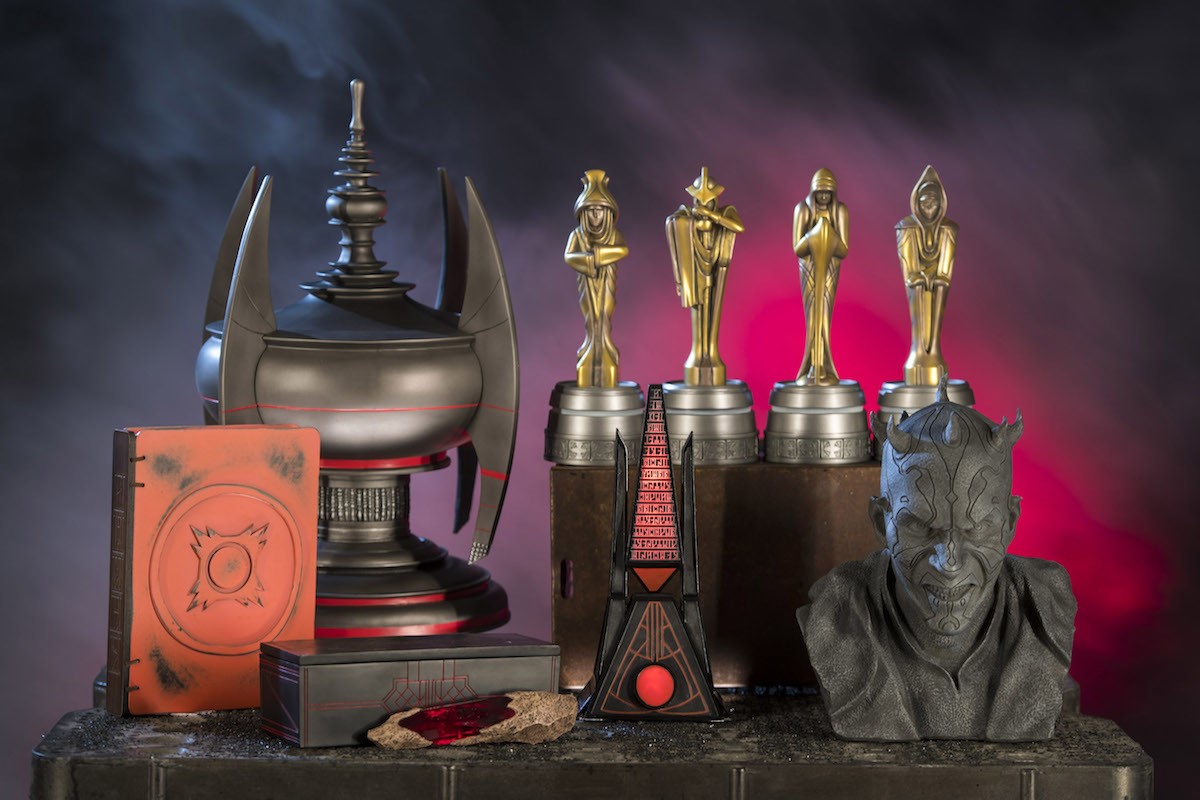 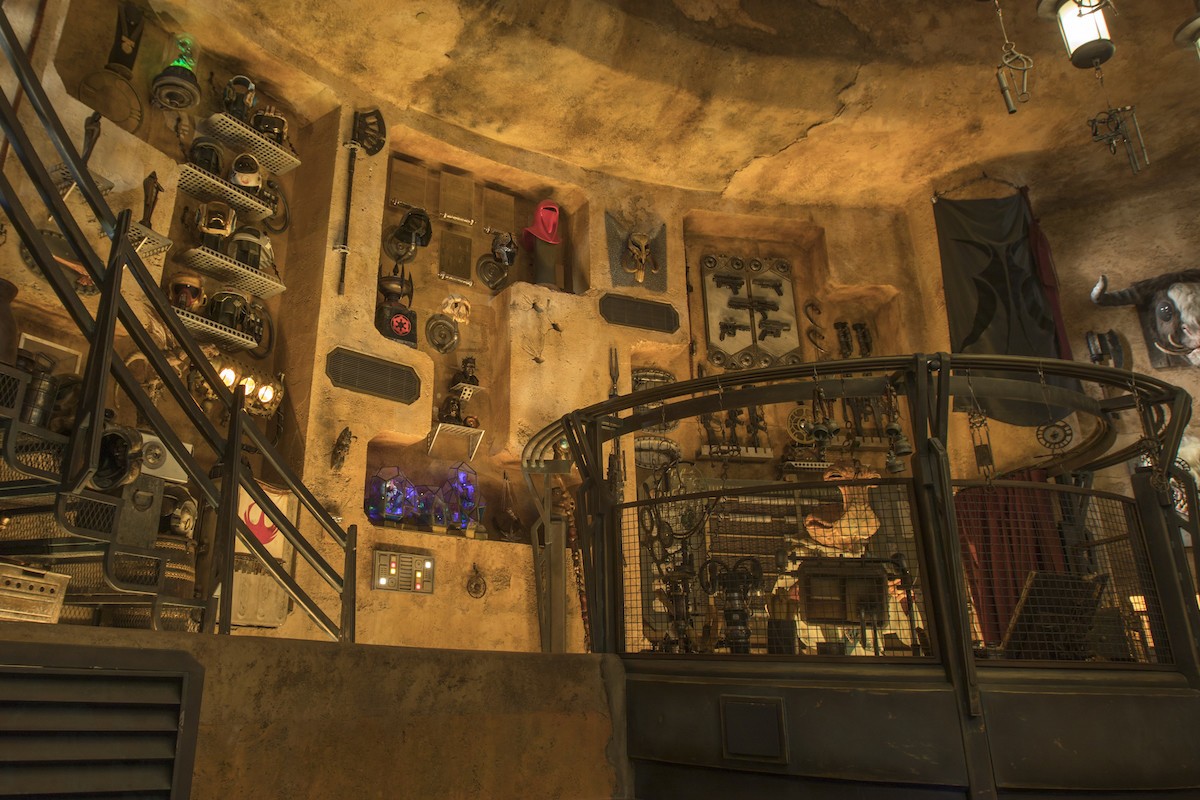 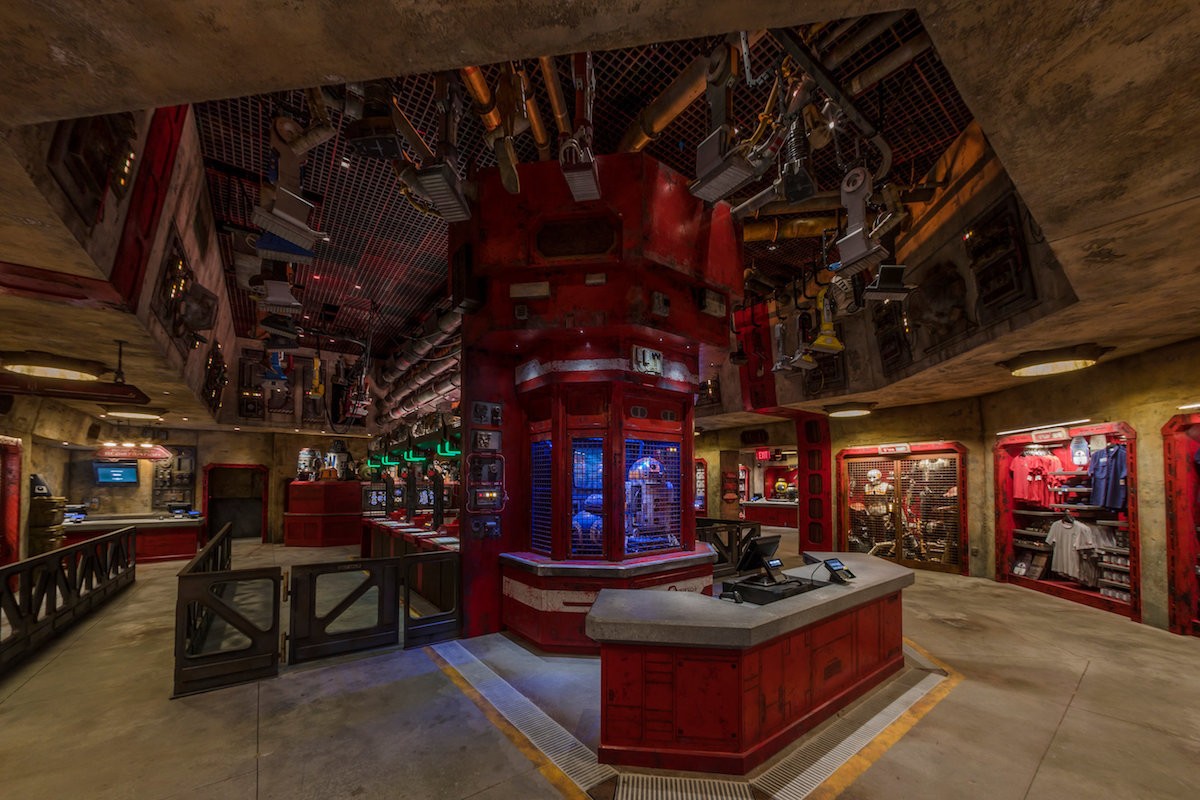 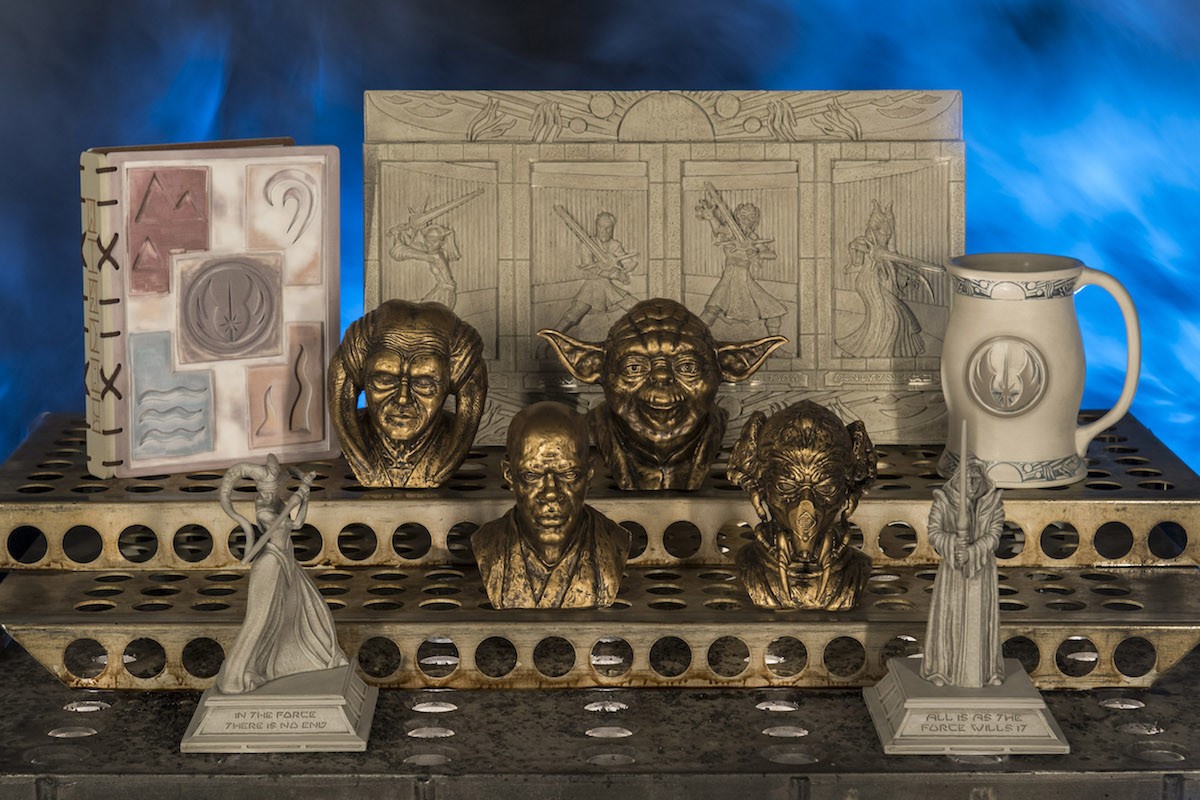 My trip to Star Wars: Galaxy’s Edge wouldn’t have been complete without popping into Savi’s Workshop, where I hand-built my own lightsaber. You get to choose from four different types of lightsaber: Peace and Justice, Power and Control, Elemental Nature, and Protection and Defense. From there, you have different pieces you assemble and you choose the color of your Kyber crystal.

I myself chose a purple crystal and went with Elemental Nature. That’s a rancor tooth pommel. I’m told they’re dangerous to come by, so I was lucky they had some among the scrap in the shop. 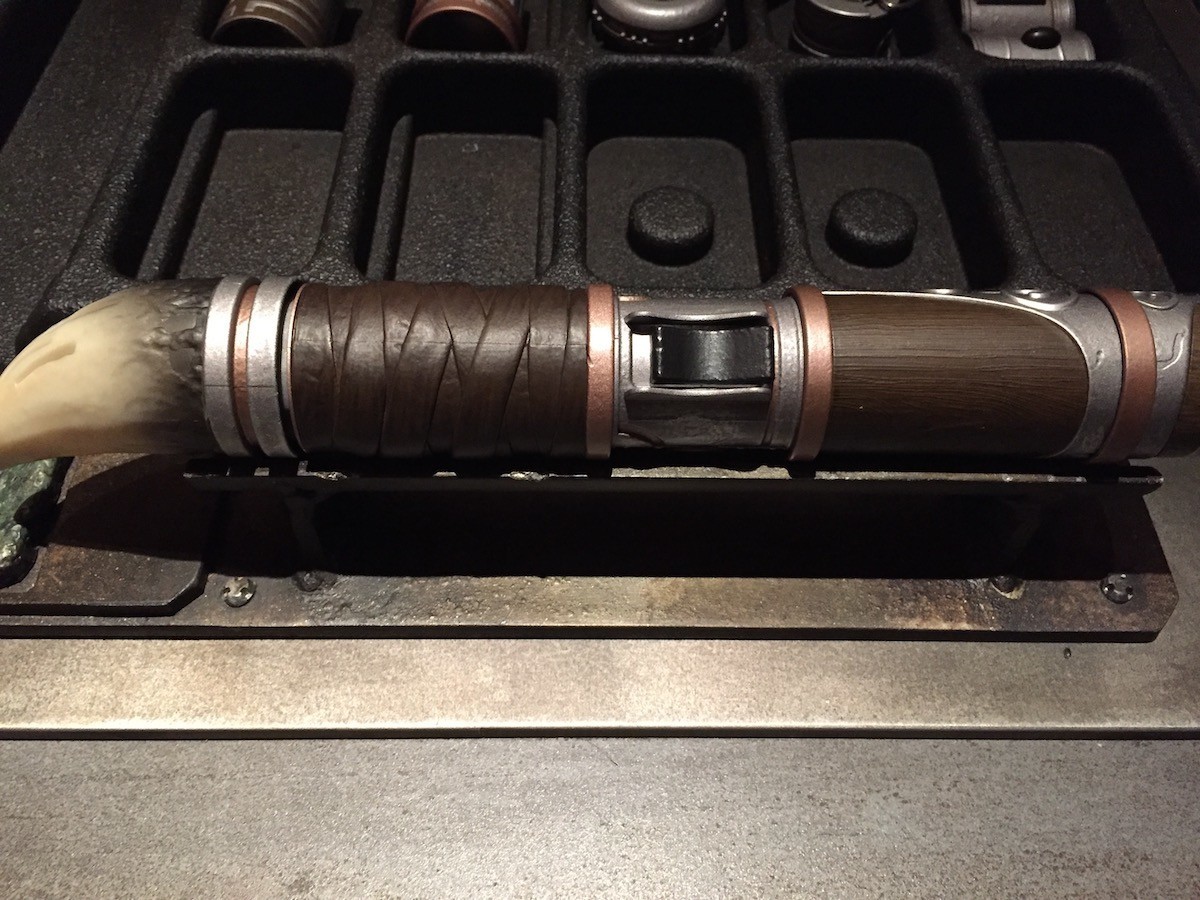 What made this experience so amazing is how this all happens. As you can imagine, with the First Order presence on Batuu, lightsabers aren’t just something you advertise making and there’s a definite presence of the Force while you’re building your saber. It’s a wonderfully mystical experience. 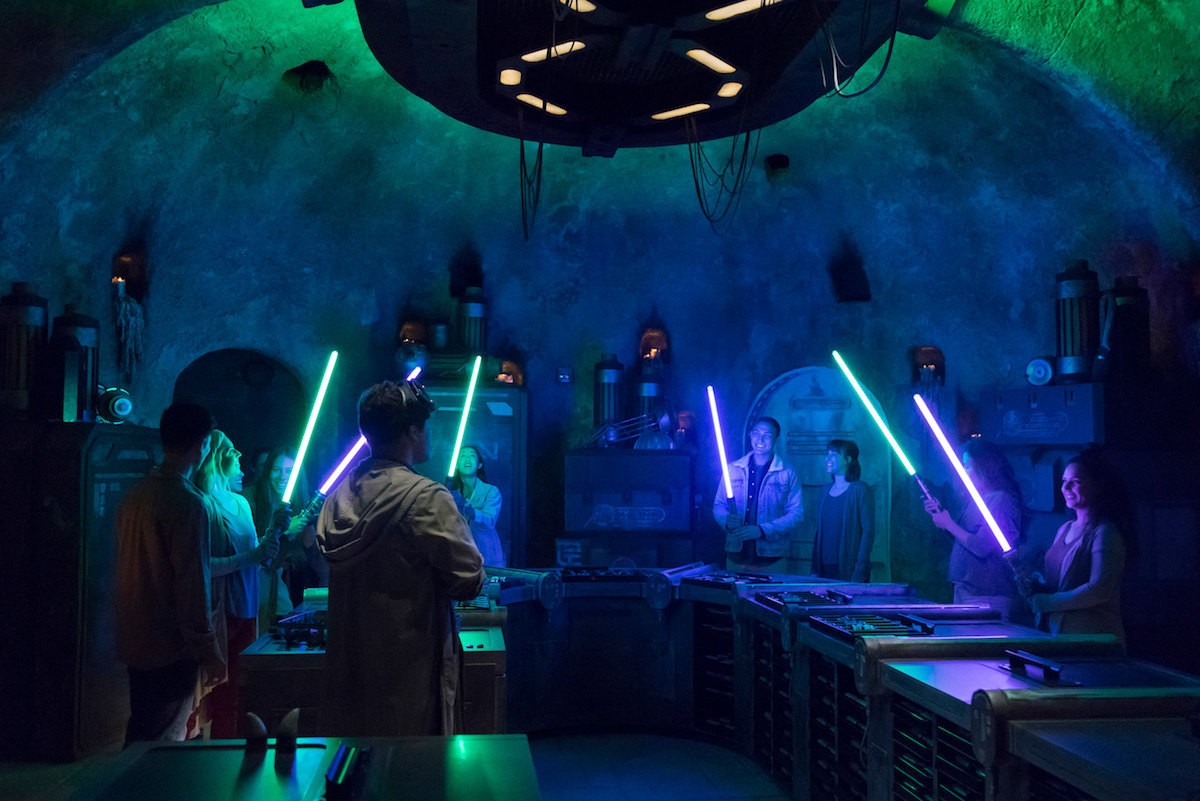 At the end of the night, as I was sitting on a wall across from the Millennium Falcon, I found myself staring at this amazing place around me and feeling like I was home. Everywhere I looked there was something I recognized as part of a world I’ve been a fan of for so long. And I was in that world. I could look up to my left and see a shuttle taking off or look to my right and see the entry ramp to the Falcon itself.

It had been a 15-hour day. I was tired. My feet hurt. I knew I had to drive home, and I was carrying a lot of different things. But I also felt so much peace. I felt like I was home. Like I’d found a place where I could be a part of the world I’ve loved for so much of my life, and that everyone there, from the young man sweeping up who asked me if I was looking for a smuggling gig to the little children still running gleefully across the courtyard, was having the best time possible.

It was a glorious experience. And I can’t wait to do it again.

It was a beautiful day at Black Spire #GalaxysEdge pic.twitter.com/SM2ALPadSO