The title of Shadowhunters season 3, episode 11, “Lost Souls,” perfectly encapsulates what we see in the 3B opener. Our review.

The Shadowhunters premiere is unrelenting. Any doubt that the back half of the season would not dig deep into the process of grief and how it differs for these characters is erased within the opening minutes. From Jace’s need to feel physical pain to Simon’s self-imposed isolation to Luke’s incessant investigative work, let’s unpack how everyone is moving on and scrapping by in “Lost Souls.” 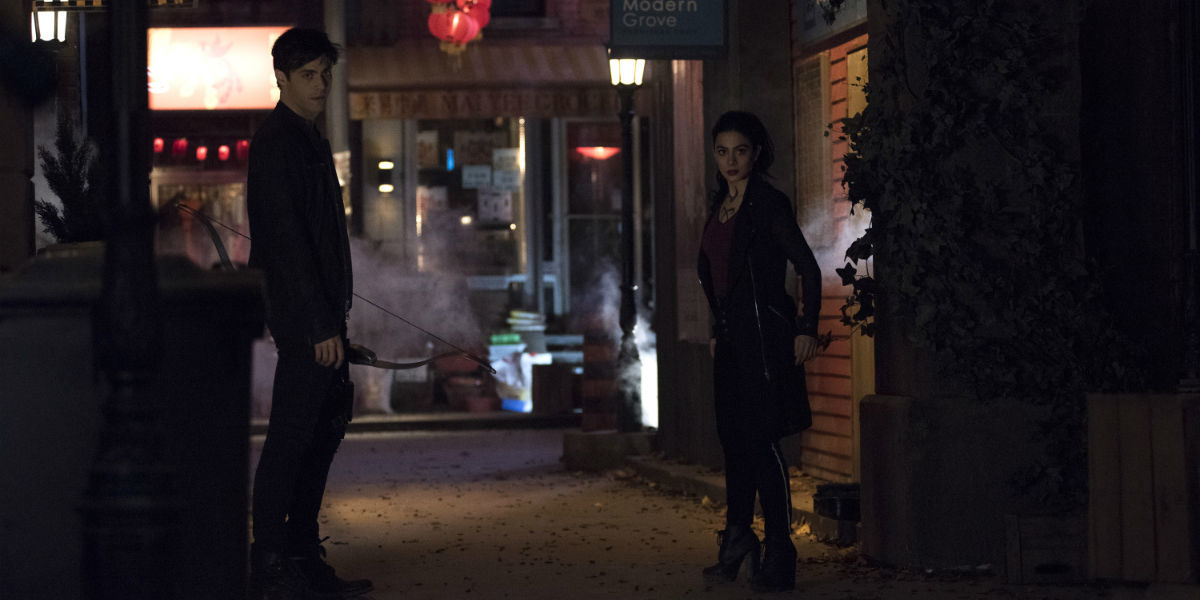 A shift occurs on Shadowhunters as Clary is isolated from the core group. From an audience perspective, we are keenly aware of the fact that Clary is alive, mostly well, and still driven with inextinguishable determination.

But that determination to get back to what is lost is hindered by the one part of her life she is not so keen on resurrecting — Jonathan. The brother who was not raised as part of her family unit, who had no say in the upbringing he was subjected to, is now offering her soup and tea while standing in front of her with matching marks emblazoned on their chests.

She does not have enough time to contemplate the events going on back in New York, as her first instincts need to shift all her energy to make a different choice — fight or flight.

Clary’s first move is to run. While she does not assess the inhabitable environment nor her stamina very well, she does give Jonathan an accurate read. His weakness, at the present moment, is desire for connection.

Where Clary sees her choices with Jonathan as very black and white, Jonathan exists in the grey area of “Lost Souls.” Instinctively, I was on Clary’s side: Get out of that enchanted apartment and get out fast, stab Jonathan (albeit a bit hastily, especially since she does not know how to make the apartment relocate her), do whatever it takes to find some sense of security.

But by the episode’s end, I felt slightly unsure of what to do with him. He did not choose to spend his days in Edom. He did not ask for his mother to walk away so he could live out his days as his father’s genetic experiment. He is, perhaps genuinely, trying to get a grip on the events of his lifetime and what it means now that he is in control of his body and mind.

The only person who can help happens to be the person who wants nothing more than to bury the memories of him and their father for good. Clary just relived bringing her father back from the grave, and she is emotionally far from accepting her mother’s death.

So, where does that leave us? For now, in Siberia in a stalemate.

After weeks under the control of the Owl, Jace is taking back control of his life in the way that comes the most naturally — physical altercation. The feeling of fighting, training, running, and smashing items provides a bit of connection to reality. He hits something, feels the pain instantly affect his body. It’s not buried or repressed, it’s instantaneous.

In a moment early in the episode, Jace is running ahead of Alec and Izzy. They are yelling at him to fall back, to let them help, but he is of a single mind, his mind. Adapting back into a team setting will likely be one of the many things that Jace will need to focus on in the coming weeks. Leaning on people for emotional support is another.

Sprinkled throughout the episode are memories of acts he committed under the influence of the Owl. And there are two moments that stand out to me as he recalls the burden of having those memories trapped inside of his mind.

First, the moment where Alec pulls him aside in the Institute. Alec has a lot going on with Magnus and the daily to-dos of running the New York office. But there is something I always forget is tugging at Alec silently, off screen — his parabatai rune.

Jace is in almost crippling emotional pain. Alec feels the weight of that more than anyone and he also remembers the feeling of losing his parabatai, not just to the Owl, but to death. Seeing Jace struggle and recognizing the pattern of throwing himself into danger is a reminder that this severing of their bond could happen.

But Jace is lucky in that he has his friends and family. And he also has his compassion. Which brings me to the second moment of Jace’s journey this episode, when he pays Luke a visit. Jace could have easily kept going at the Institute, but he specifically takes a beat and steps out to see Luke. 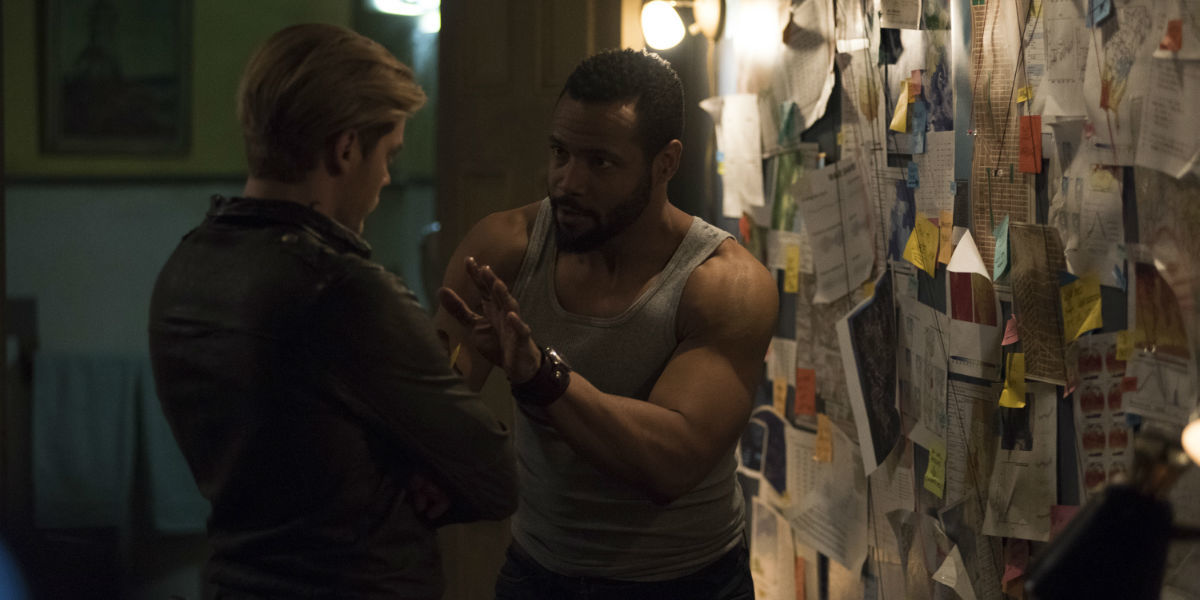 And Luke is manic. His obsessive need to solve the puzzle that will prove Clary (his non-blood daughter) is alive looks unhealthy. And it is. Jace recognizes it and tries to cast his reality on Luke. Clary is dead, there are no ifs, ands, or buts about it. However, there is a huge “BUT” out there. Luke just needs someone to lean in on it.

Jace is not that person. In his reality Clary is gone and never coming back. That hope might set him too far off course. But Luke… well he may be onto something, if only the right person would get to him.

Magnus’ adaptation to life without magic could very easily turn into a gag to underscore the season. Oh, Magnus has to do his own eyeliner, oh, he has to make food from scratch, etc. But where those moments do appear, they are unbalanced by the heavy burden of the reality of his new life. Alec is a great supporter, one of the best according to showrunners Todd Slavkin and Darren Swimmer, but Magnus is going to need more than a reminder of his strengths. He is going to need to see them tested and proven over and over again.

When Magnus nearly loses Madzie, it is a rude awakening. The helplessness that comes along with the loss of something you’ve relied on for so long creates a crater of loss. But Magnus slowly finds ways to traverse it. His unflappable protectiveness serves as a failsafe. In the moments where Iris is threatening to hack his memory to find Madzie’s location, Magnus puts his memories on shuffle, giving Iris (and viewers) a chance to take a peek inside the life and times of Magnus Bane. 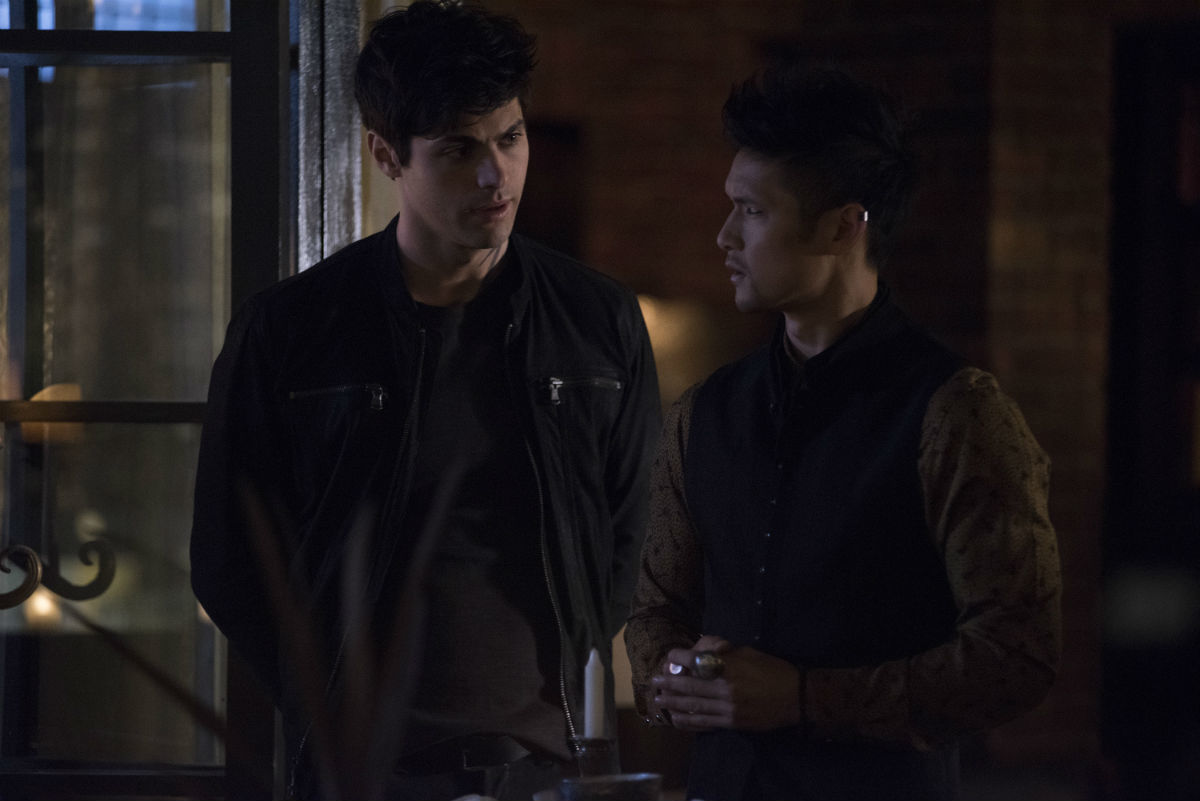 He holds out, but still needs someone to come to his rescue. Safety is something he is used to providing, but having to receive it is going to take some time. And I am glad that this is not going to be a one and done issue for Magnus. Magic is not restored. Instead, Magnus is going to traverse this new landscape. But he is not going to do it alone.

Magus has the most powerful companion in his corner, someone who will not only be able to train him to fight, but empower him to confront the emotional component of this journey.

It’s a miracle Simon is able to sit at a table, let alone speak openly about what is going on in his life. Losing his mother and his best friend is hard enough. But Simon bears the full weight of those losses. It was the Mark of Cain that led to Clary’s demise and it was the twisted end result of his actions as a vampire that left him unable to be in his mother’s life.

And there are other uncertainties plaguing his thoughts. Raphael is gone, no one can help him understand the Mark of Cain, Maia returns ready to help, but with a newfound distance existing between them. There is no fix to the immediate pressures of any one of these problems. But there is, perhaps, a way for Maia to help.

Maia understands that she and Simon are not on level footing right now and if he needs to figure this situation out with her, then she can at least be the catalyst to set him on his way. Since Simon is not leaving the apartment currently, Maia reaches out to Izzy and they find a way to get Simon working on understanding what the Mark of Cain means and how they can get rid of it.

Simon may not be okay. But he is not going to be lost forever.

As a Saia fan, this isn’t exactly how I want to see things go. But as a fan of Maia and Simon, I am happy with the way things are progressing. The two individuals, in the places they are operating, are not going to be of great aid to one another at this time. The point of contact is there; Maia recognizes that bringing a werewolf to a vampire gathering is not the smartest idea and it would complicate matters in a way that is not necessary. Plus, I am greatly looking forward to her reunion with the pack and especially how her relationship with Luke will develop. 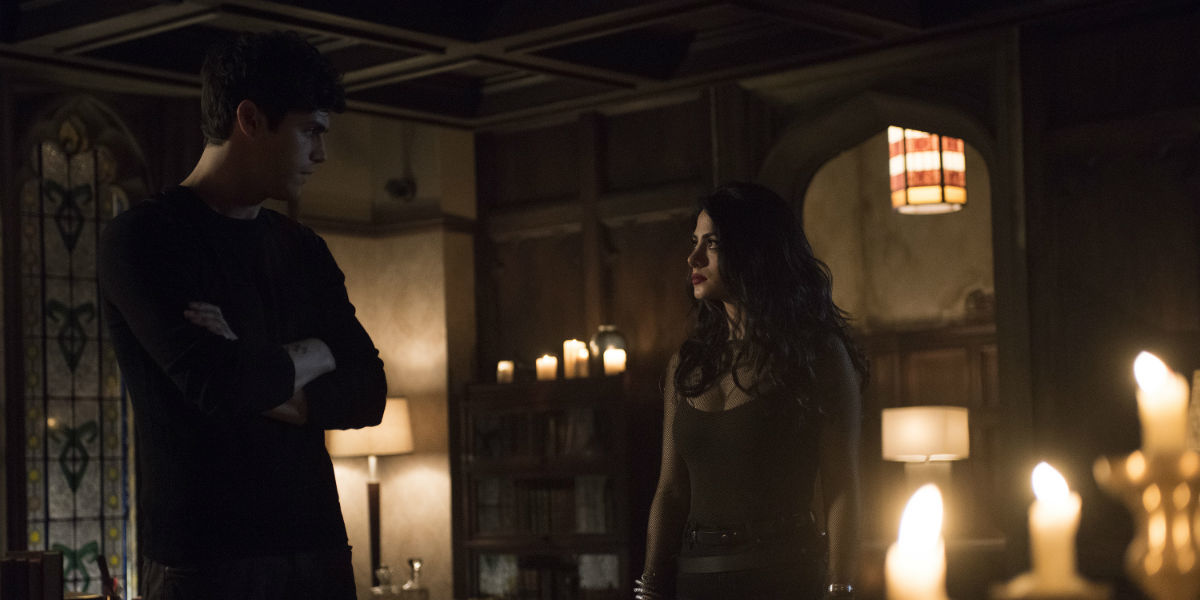