We use cookies to ensure that we give you the best experience on Hypable. If you continue to visit us, we will assume that you are happy with it.
8:58 am EDT, April 18, 2021

On Nancy Drew season 2, episode 12, Ace’s secret half-brother comes forward to Ace for Nancy’s help with the trouble his mom has gotten herself entangled in. Meanwhile, Nick hunts down a lead that Tiffany left him.

Nancy Drew season 2, episode 12 is one of the strongest episodes of the season… at least when it comes to Nancy, Ace, and Grant digging into Thom and Suzie’s history and the case that landed her in protection.

However, Nick and George continue to disappoint with stories that aren’t really going anywhere. 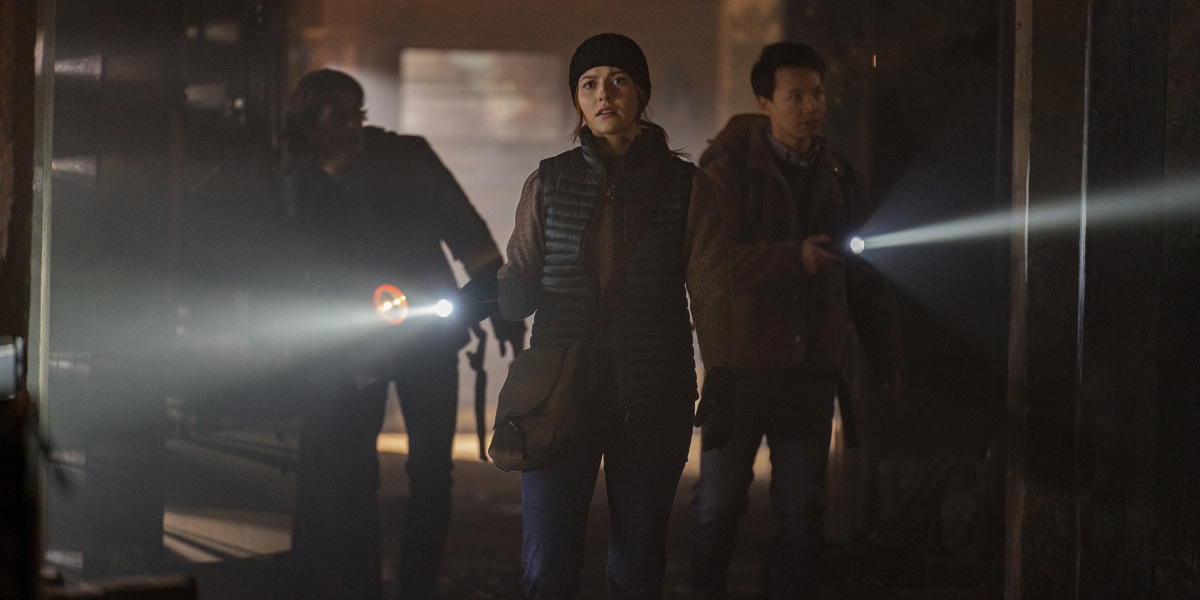 Nancy Drew season 2, episode 12 is a much-needed improvement to the season, which has drastically decreased in quality in comparison to the shocking, intriguing depth of storytelling that season 1 enacted and explored.

After so much teasing, the payoff of Ace’s long-lost brother is well worth the wait, even if it was a one episode and done (for now) deal. There’s a lot left unsaid and unexplored, so the likelihood of Grant returning to Horseshoe Bay is high, which is quite exciting.

So much of what’s going on feels disconnected though, and the events of this episode are no different. For instance, did we really need to see George off on her own, competing in a chowder competition? What a waste of time, honestly.

I’m hoping for so much more from this show. Last season, every episode kept me glued to my television and waiting on the edge of my seat for the following episode to unfold. Since the Aglaeca story ended, I haven’t felt that for Nancy Drew. So much potential is being wasted with stories that just aren’t interesting or evocative. 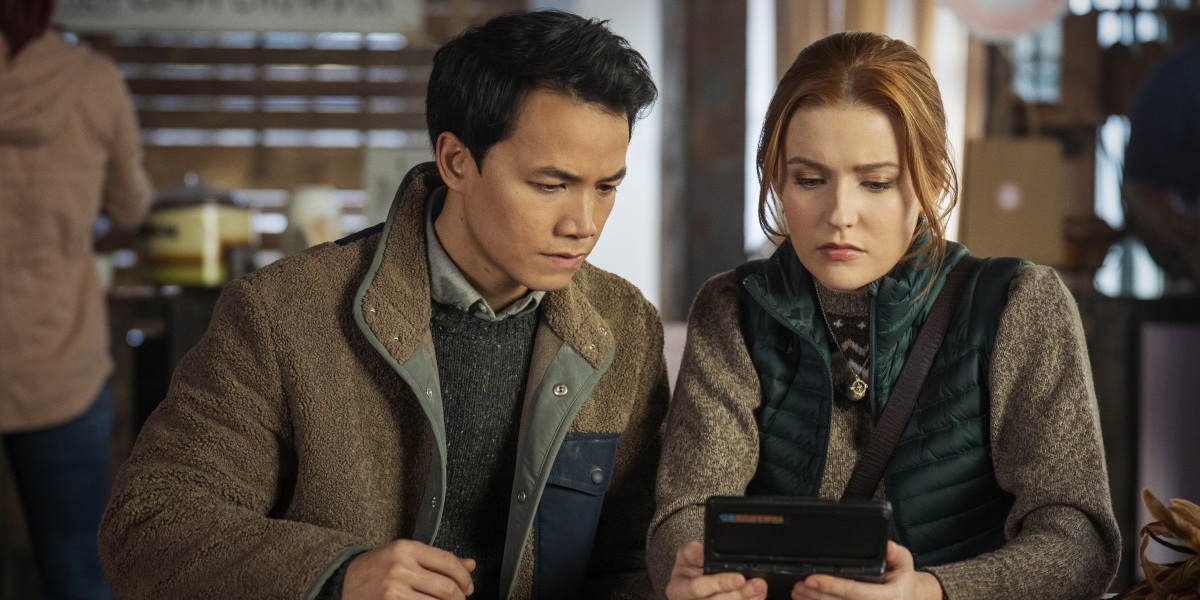 After episodes teasing the anticipated arrival of Ace’s brother, Nancy Drew season 2, episode 12 delivers by showing exactly what Grant has been up to since he arrived in Horseshoe Bay.

It’s no surprise that he is the brother, as I wrote in my previous review, but is the perfect follow-through on foreshadowing. I’m relieved that there was no surprise twist, as too many shows often throw in at the last minute when people have figured out the mystery.

Seeing them bond really brought out the comedic element that Alex Saxon excels at with Ace, as well as the nurturing side of Nancy that usually only comes out when she’s supporting someone involved in her mysteries. Shannon Kook’s Grant played well off of both characters, and the route the writers took with Grant was quite refreshing.

Too often, a character like Grant would have been hardened and standoffish, so it’s very nice that he’s almost the exact opposite. He’s open to Ace, his brother, and harbors no dark feelings for the father that didn’t know he existed or the mother that had to leave her life to take down the bad guys.

That said, the mystery that Nancy Drew is attempting to start with this “Road Back” is concerning. I’ve yet to see a show handle having some huge secret organization running things and pull it off. ABC’s Revenge season 2 is a prime example of how that can fail.

Maybe this won’t be something explored in-depth on the show (I hope), but is just an opening for Grant to come back. But, given everything that has happened, I wouldn’t be surprised in the slightest if Nancy Drew takes the same route as Revenge and ties the unbearable and villainous Hudson family into this larger criminal organization.

Anyway, I will be watching that final scene between the boys and their father on repeat. One of the best scenes of the entire show. 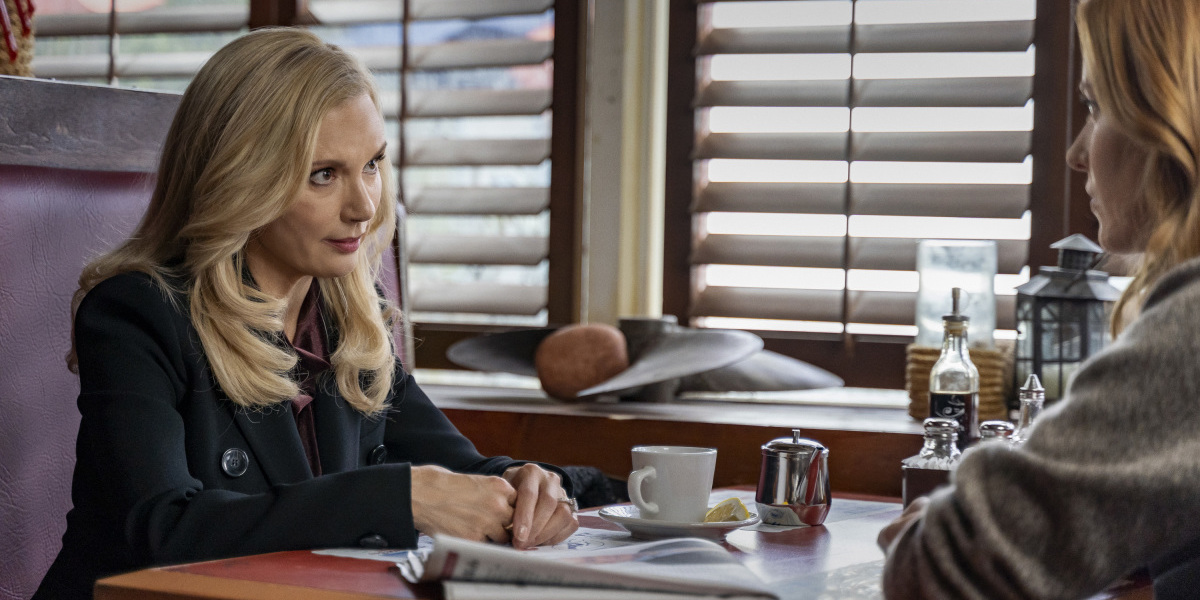 In no surprise, in order to save multiple lives, Nancy Drew season 2, episode 12 ends with Nancy giving in to Celia’s wishes and changing her testimony against Everett Hudson.

(First of all, let me just start by saying this was quite an illogical move on Nancy’s behalf. Daniel West, the admitted murderer, had already seen the names on the list that Grant’s mother was hiding. Stealing it back wouldn’t have wiped his memory clean, and Nancy said no blood was to be spilled. So why did she bother? Why did they use their knowledge to open the list in the first place?)

As Nancy said to Celia, this will destroy her credibility in Horseshoe Bay. No one doubts that Everett Hudson is responsible for the sinking of the Bonnie Scott, so now they’re going to think she’s a liar. If the truth ever gets out about her being a Hudson, it’ll be even worse. (And given that this is a television show, that’s inevitable.)

Nancy has officially sold her soul to the devil, and consequences are surely to come. I’m already sick of seeing this story play out with the Hudsons, so Nancy being dragged even further into it is… less than exciting.

The Hudsons make this show unenjoyable; that said, I am enjoying seeing this complex relationship between Nancy and Celia play out post-memory loss. There’s something unique about that relationship. Ryan is the one that really drags things down. 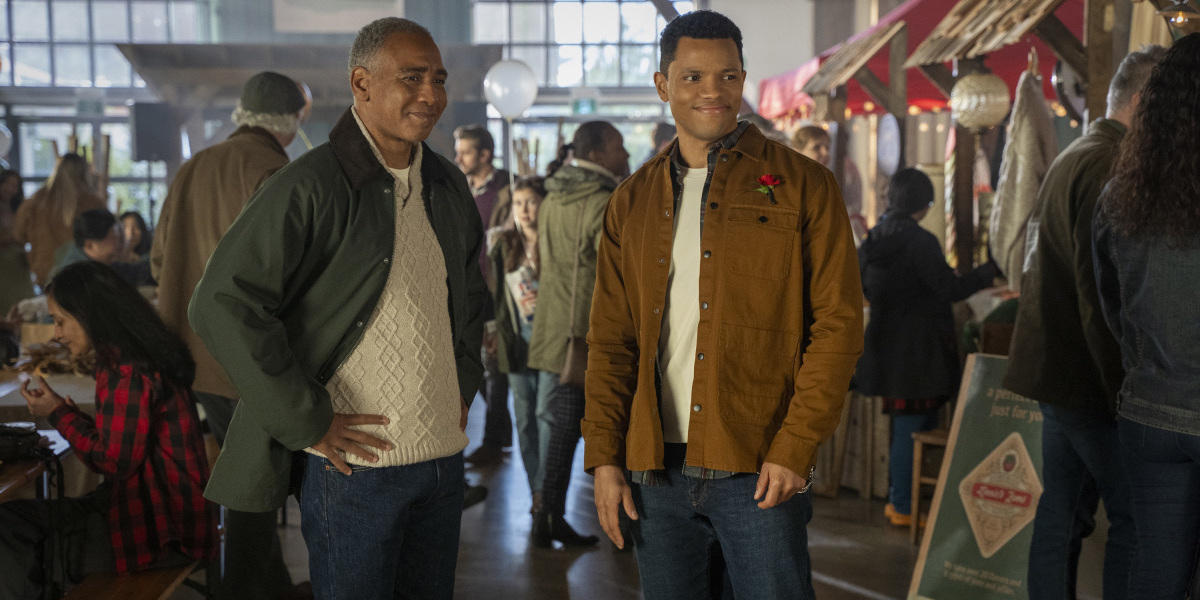 Nick finally getting a part to play in taking down the Hudson empire is a change of pace on Nancy Drew season 2, episode 12. This was his story to begin with, given his bond with the late Tiffany Hudson and her wish for him to finish what she started, so the fact that he’s been in a backseat role for almost the entirety of it is ridiculous.

Not that his story was very significant here either, though. His job was to find a man that Tiffany believed to have evidence, which will surely tie the Hudsons to the Road Back in some capacity.

I hope in the future Nick will play a bigger role, especially with Nancy now involved and her life on the line. Those two could easily work together to dig into the mystery together (if the writers will let him have a story where George isn’t involved again, but that’s a big if). 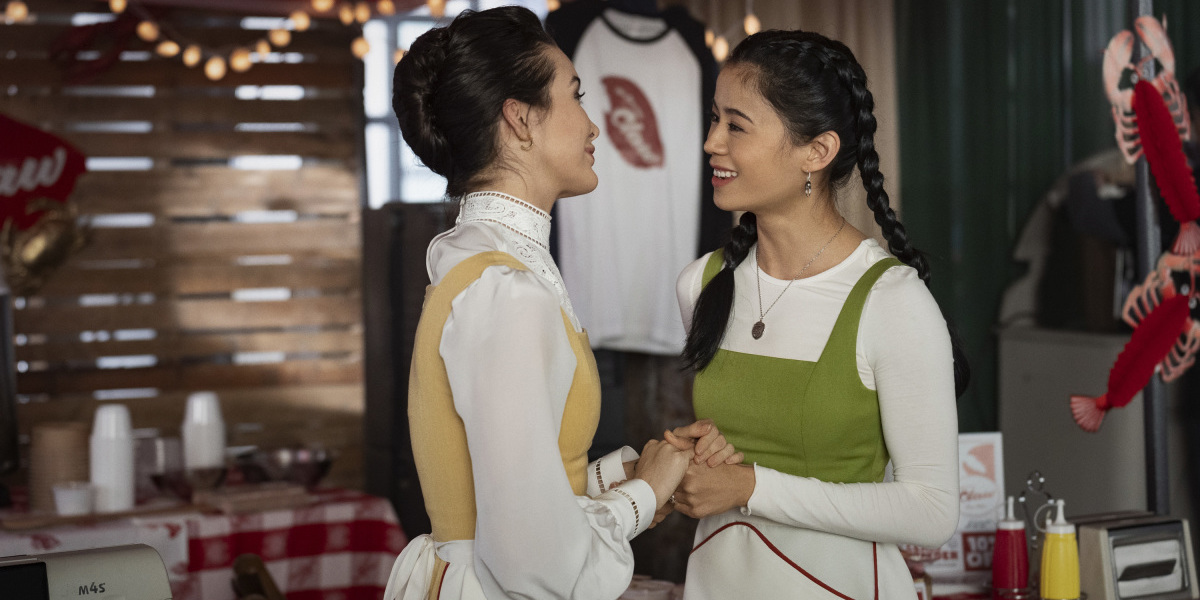 I’ve had a lot of issues with Nancy Drew season 2, but none more so than how these stories are spectacularly failing Bess (and, by extension, Maddison Jaizani). Nancy Drew season 2, episode 12 only increases my frustration with this story given how Bess’ 30 seconds of time on-screen was all about Odette.

Bess doesn’t really have a story of her own, and hasn’t since the very beginning of the season as she contemplated her relationship with Lisbeth amidst the Aglaeca’s death omen haunting her. Even this weird thing she has going on with Odette is more about George than about Bess.

As I’ve said before, this feels like a very complicated way of baiting LGBTQ+ fans that were vocal about their wish for Bess and George to embark on a romantic relationship. This is just simply giving them a glimpse at what they want with no future to follow-through.

It’s clear that Odette will be leaving George’s body inevitably, so what’s in this for Bess besides unnecessary heartbreak and tainting her friendship with George? Bess is more than just the people around her, whether that be the Drew Crew, the Marvins, or whomever she may be seeing romantically, yet that’s all the writers see in her. 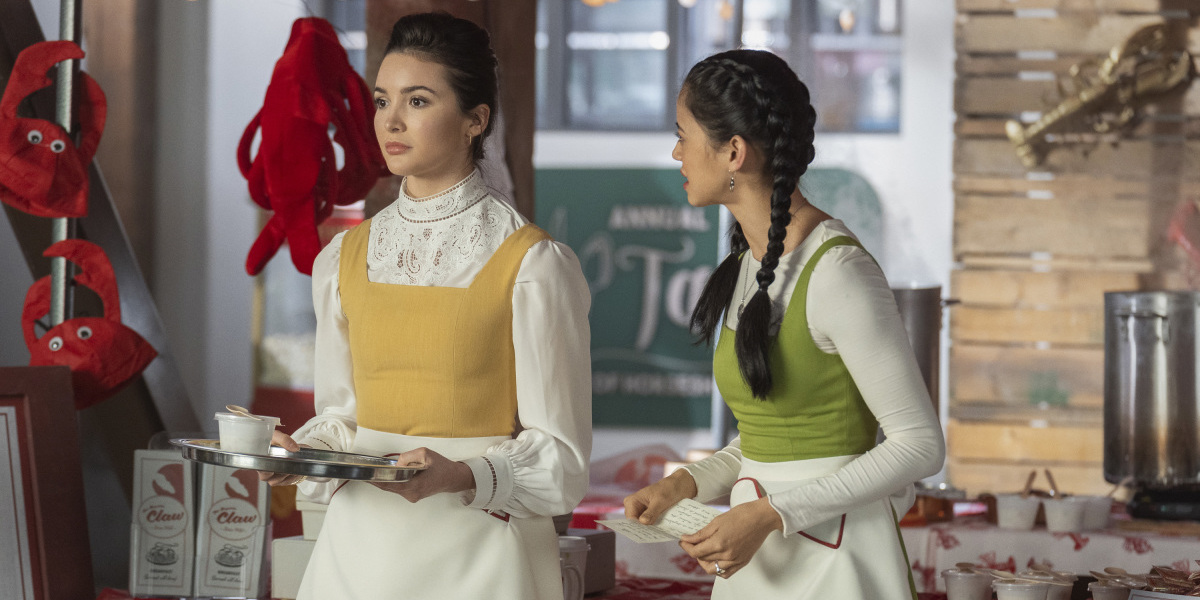 It feels like no real care is put into Bess’ story or the message being sent to the fans that identify with her in some capacity. It feels like she’s just the token lesbian with little to no story that the network requires. This Odette story is a perfect example of how Bess, who is actually an intriguing and compelling character with loads of potential, is being wasted.

Plus, there’s a lot of talk about consent between Bess and Odette (in George), but are we not going to see it addressed how Nick and George are continuing on with their relationship at a ridiculously fast pace with Odette inside George? It’s not like Odette chose to be tethered to George, so where’s the consent talks there?

Truly, this entire story is just leaving a gross aftertaste with every viewing and needs to come to an end soon. I see why the writers wanted to explore this, but it’s not working. Can we just bring Lisbeth back? That was a great relationship.

All in all, Nancy Drew season 2, episode 12 did little more than other episodes to relieve my qualms about the series moving forward. So much potential is being wasted, and it’s so disheartening to watch how this show has basically fallen apart in only the second season.

I am liking the buildup of Nancy and Ace’s relationship, which now has some more tension introduced after Nancy risked it all for herself and others to save his life. It’s too bad the twins are romantically intertwined with both characters right now, ’cause some hearts are going to break in the (possibly near) future…

HBO’s House of the Dragon is officially on the way!

Master of None is making its grand return to Netflix and now, you can catch a taste of what’s in store for season 3 by checking out the first teaser trailer for the new season!

Watch the first teaser trailer for Spielberg’s ‘West Side Story’

The first trailer for Steven Spielberg’s West Side Story is finally here— check it out below!

BTS is making their first 2021 comeback with “Butter”! Get all the details on the “Butter” single release dates, teaser photos, videos, and more here!