We use cookies to ensure that we give you the best experience on Hypable. If you continue to visit us, we will assume that you are happy with it.
10:00 pm EDT, April 3, 2019

The title to The Magicians season 4, episode 11 is clever. Not only is it episode 4×11, but it’s one heck of a LOT of information. The good news is, “4-1-1” served it up nice and neat while also letting us see just how messy things are about to get.

It took until The Magicians season 4, episode 11, but we’ve finally figured out what Everett’s really up to and, man, is it NOT GOOD. If you thought all these meters and tattoos were helping people or that Everett was anything but a super bad guy, now we know for sure he’s definitely a Super Bad Guy. Now we know why the “measured” ambient levels weren’t the same as the actual ambient levels in the pipes and why hedges are being attacked and why the Library has a stranglehold on magic as a whole.

What else? Penny and Julia finally kissed; we found out what The Binder can do to help Julia; Quentin and Alice spent some time at Brakebills South and came back a little less mad at each other; Fen, Josh, and Tick played games in Fillory and may have figured out where Everett’s hiding his magic stash; Kady and Zelda are trapped in the poison room; and Monster Eliot kidnapped Julia because he’s planning to make her unkillable body the host for her sister.

Okay, that’s a lot. Let’s talk about it? 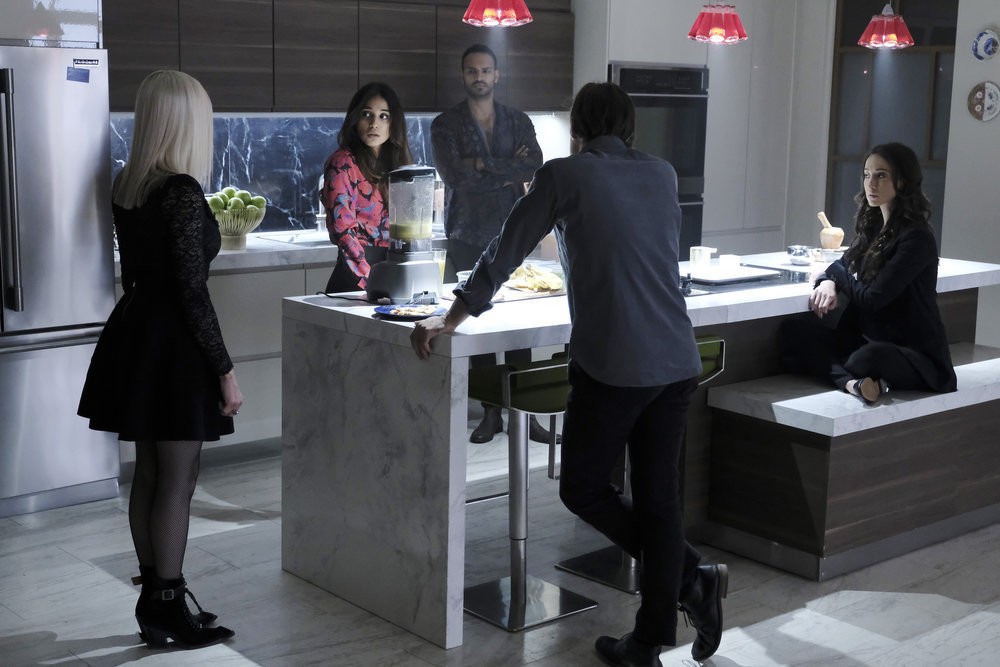 Everett and the Magic Cistern

Someone’s got a God complex. Everett’s making himself a magic pool so big he can become a god — because that always turns out well. The good news is, it means we can all stop feeling like we’re being gaslit by the dude and turn our attention to hating him full time now. On a side note, Brian Markinson really is a wonderful actor. I do, however, feel terrible for Zelda. It’s never easy to learn someone you loved and trusted is a mustache-twirling villain.

I’m still not sure if Everett actually is Rodric from the Fillorian rhymes or if Everett’s just gotten himself a “great idea” but his magical restructuring plans have definitely caused all sort of havoc in Fillory.

In either case, I’m thinking it may be time to create some sort of spinoff wherein Josh, Fen, and Tick solve crimes in Fillory using Fillorian rhymes and games. Because that game of Bearskip yielded some amazing results.

I remain hopeful that them finding the cistern in Fillory will put them in a position to help thwart Everett. I don’t know if it mirrors his pool or is his pool, but we’ll find out, right?

The Binder and Julia

Put Matt Frewer in something, I’ll be happy — but cast him as an old Librarian turned into a book, you’ve got me for life. We’ve had pieces of the puzzle when it comes to what Monster Eliot seeks (literal bloody pieces) but The Binder has the explanation about what this is all about and, ding ding, helping Monster Eliot find those stones was a terribad idea.

Not only do we learn why the stones were in the gods, but we learn The Binder helped put those stones there. The Binder’s specialty is the magic inherent in gods and how that energy could be harnessed so now we know why Monster Eliot is how he is and why he wants the stones.

Of course, we also now know why everyone wanted Julia to get her Goddess powers back since her being unkillable makes her the perfect host body for the stones Monster Eliot now has.

But The Binder also knows how to make gods human again. That means we have a chance. As long as no one burns his book. Which, of course, he asked Julia to do. 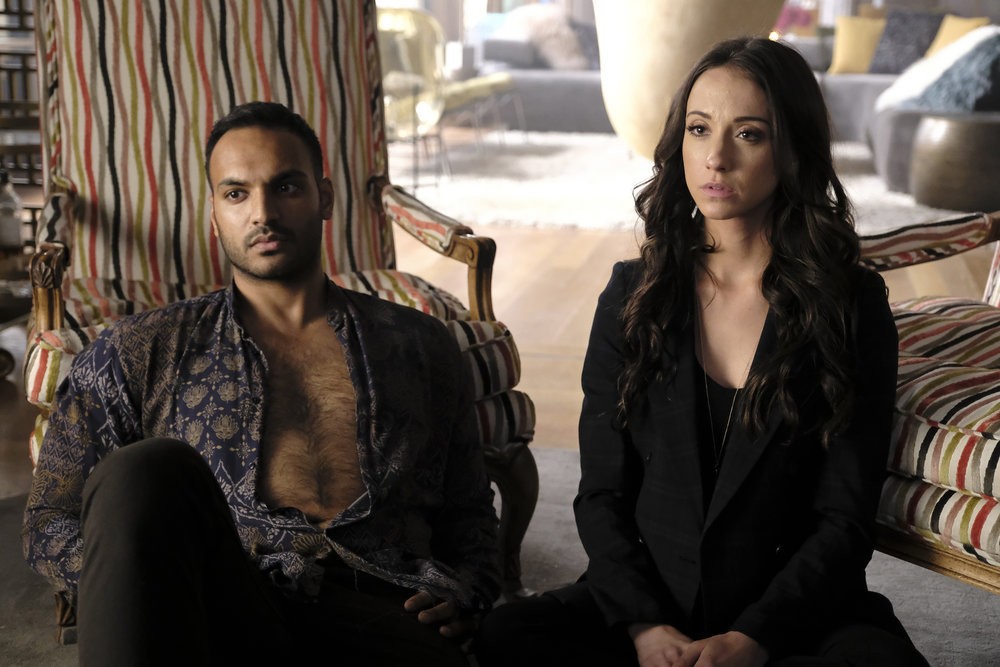 Hyman may make me a little bonkers but I don’t mind him stepping in for the shippers on this one. Locking Margo in a closet and rose petals and candles were a bit much, but he means well. Hyman’s also right about how they both do give up a lot for others.

I mean, sure, Monster Eliot comes to take Julia pretty much right after these two talk it out, but at least they finally kissed. 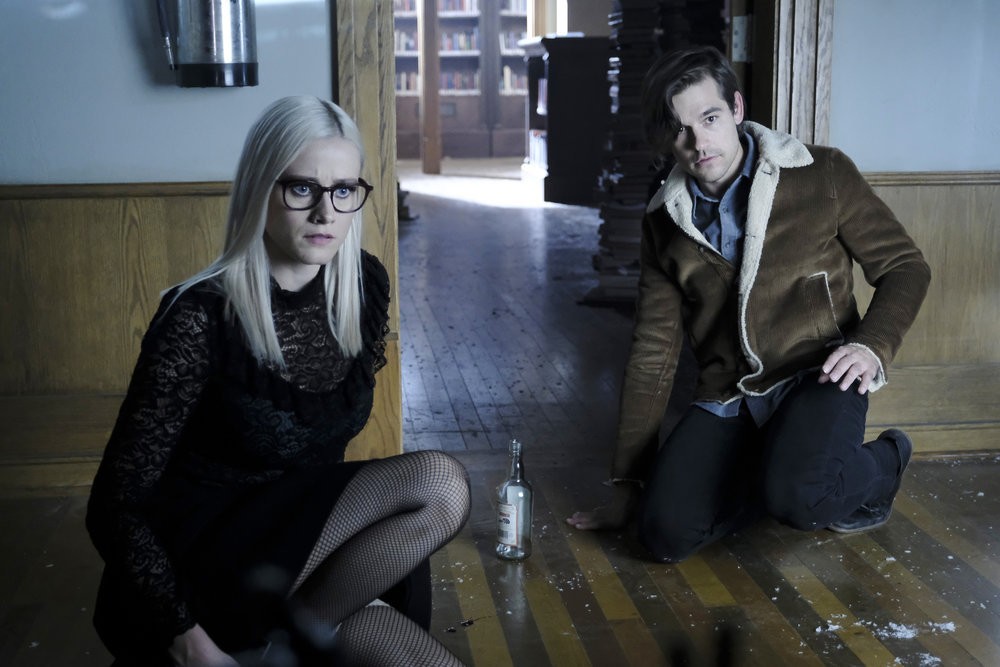 For the most part, the mission goes as expected. Timeshare spell works. Quentin gets the spell. He comes back.

But it’s what happens along the way that makes things…interesting.

During the timeshare spell, Alice gets to spend time with the Quentin who was totally in love with her while Quentin is back with the Alice who was totally into him. While present Alice is more pleased with the turn of events than present Quentin, it does seem to have an effect on them both in the end.

I’m not 100% sure what happened. I do know that Quentin’s past self didn’t get his memory totally wiped because there wasn’t enough magic for the memory charm, but I think the shift in Quentin when he returned was a reaction to his talk with Alice in the past.

Even if her memory will be wiped, Alice and Quentin have an actual heart to heart and when she sees the way he looks at her and sees the pain her future self has caused, it shakes her. And I think his realization of how much she cares and that she’d be willing to talk it out or even end it with him if it meant not hurting him changes his view on her.

I don’t think Quentin and Alice will get back together, but what he says when she asks what mending the cup felt like is important.

I may need to go back and watch The Magicians season 4, episode 11 a few more times. I feel like there’s more info that I’m missing. But that’s okay. I kinda love this show.