We use cookies to ensure that we give you the best experience on Hypable. If you continue to visit us, we will assume that you are happy with it.
11:00 am EDT, May 29, 2019

‘Into the Badlands’ season 4 was poised to change everything

The Into the Badlands series finale has finally aired, and it makes us even more devastated that this show has been cancelled ahead of season 4.

In the finale, we saw both The Widow and Sunny regain their powers. Tilda was seriously injured while both MK and Pilgrim died. Cressida escaped on a boat before Moon could do her in, and we learned of an even bigger threat about to come to the Badlands — guns.

What is ‘Into the Badlands’ season 4’s air date?

AMC announced in early 2019 that Into the Badlands season 4 has been canceled, so at this time there is no air date. The news arrived after quite a long social media silence from the official Into the Badlands accounts. The good news is that if you need another drama like this one, there’s at least one other show like Into the Badlands.

Here are some reactions to the cancellation from the series’ cast and crew:

Good news always comes with bad news. First the good: #IntoTheBadlands returns. The final episodes premiere on @AMC_TV on March 24. The bad: after these 8 episodes air that will be the end of the show. The bad is obviously a lot worse than the good, especially for all of you who have supported with so much passion over the past three seasons. Thank you for your support. We always had you in mind while making this as we wanted to give you the best martial arts action show to ever appear on tv and I think we achieved that. But that wouldn’t have been possible without you! So thank you! Thank you! Thank you!

I was going to drop that season 3 returns 3/24 but it seems news has been released that season 3 will be #IntoTheBadlands last.
I’m really sad at this decision. An incredible group of people made our show both infront and behind the camera and I’m sad that’s that.
Bajie out.

Our goal was to make a groundbreaking martial arts drama and we are so grateful to all the fans who have supported ITB over these three seasons. I guarantee we will give you a bloody great ending! #intothebadlands ⁦@danielwuyanzu⁩ ⁦@moryan⁩ https://t.co/IG6ifTizl9

I was hoping for better news but it wasn’t meant to be. Thanks to every fan, our incredible cast, tireless crew & the badass group of writers that fought the good fight for this show every day in the writers room. This is part of the job. 1/ #IntoTheBadlands

Sad to hear about the cancellation of #IntoTheBadlands – my first job in the US. Wishing everyone well! pic.twitter.com/cvgbTVnvJa

The final battle.
The final season.
I promise it will be bloody worth the wait.
The epic TWO night premiere begins March 24th on AMC.
We love you all and we made history with this groundbreaking show. @AMC_TV #IntoTheBadlands pic.twitter.com/dhisdCP5VL

What could ‘Into the Badlands’ season 4’s plot have looked like?

As of right now, there are currently no plans to air Into the Badlands season 4 on AMC or another network. Executive Producers Al Gough, Miles Millar, and Daniel Wu hinted at wanting an Into the Badlands movie or graphic novel if they couldn’t get further episodes, but so far nothing has been confirmed.

This is especially disheartening because Into the Badlands season 4 could’ve changed everything.

The creative minds behind Into the Badlands have managed to do what not all shows can — keep their series interesting. Season 1 introduced a formidable villain in Quinn, while season 2 somehow made him even more terrifying. Season 3 brought us Pilgrim, and opened up the world further than we had ever seen it before.

Now, Into the Badlands season 4 would be introducing several new elements to the show.

For two of our heroes to regain their Gift, knowing what destruction it could wreak on their minds, means they possibly pose a massive risk to their loved ones and the world at large. We just spent the last season learning that very few can truly learn to control the Gift, and if it is used improperly, it could be devastating.

The Widow, for one, has been searching for her Gift since season 1. After facing her inner demons, however, she came to the conclusion that maybe she shouldn’t have that sort of power after all. She had started to lose sight of her true goal of saving the Badlands, and she knew her power wouldn’t make it any easier to stay on task. 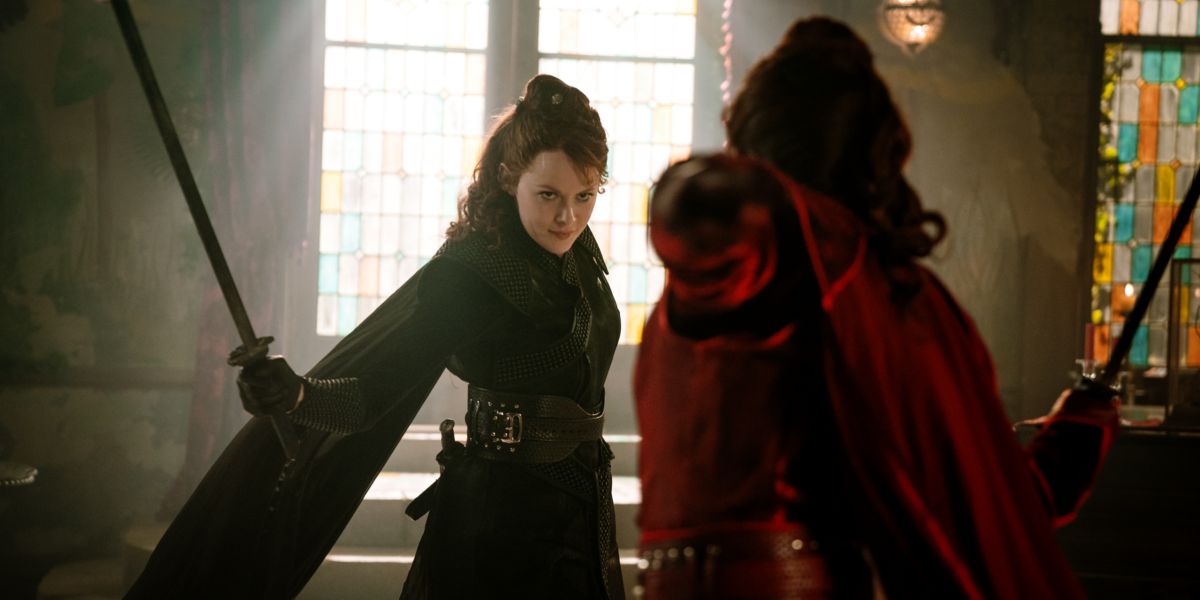 When her power reactivates thanks to her anger over Tilda’s supposed death, several questions are raised. Will she still go down the same dark path the Master foretold, or will she have more of a handle on it now that she has a better understanding of herself? How will the Gift affect her baby, as well as her relationships with Gaius and Tilda? Will her followers still want her to lead them, knowing she’s a Dark One?

Sunny has an equally complicated path ahead of him. He doesn’t remember having his power as a child and has seen firsthand the kind of destruction it is capable of. Will he still be able to care for Henry? Will his friends, especially Bajie, stick by his side? Will he be able to control the power in him better than Pilgrim or MK?

I think the most important lesson The Widow has learned is that she can’t handle power. She’s gotten to the point where she has truly set aside her own ambitions in order to protect the people she’s made promises to, and even though she might struggle, I truly believe she’d be able to handle the Dark One power inside her.

Sunny, with his golden eyes, may struggle less than the others. He has a violent history, but he’s also looked himself in the mirror and decided to be a better person. There’s no way he would ever hurt Henry, and knowing what he’s capable of will push him to be even more diligent about controlling his strength.

Tilda’s near death doesn’t have me too concerned. They would’ve killed her in this episode if they really wanted her dead, and there’s a chance The Widow’s powers could be put to the test sooner rather than later. If the healer back at camp can’t fix Tilda, maybe Minerva can, just like she’s seen The Master do a hundred times over.

MK’s death is tragic but not unexpected, and I’ll certainly have more thoughts on that later. Pilgrim’s ending was fitting and leaves space for someone else to take his place with hope of conquering the Badlands. It’s Cressida’s escape that has me most interested in what could happen during a possible season 4, as she’s got enough power, experience, and intelligence to find someone else’s strings to pull.

But all of this pales in comparison to what Eli finds at the end of the episode. In the place where the meridian chamber once stood, buried long ago and now covered in mud, is a gun. 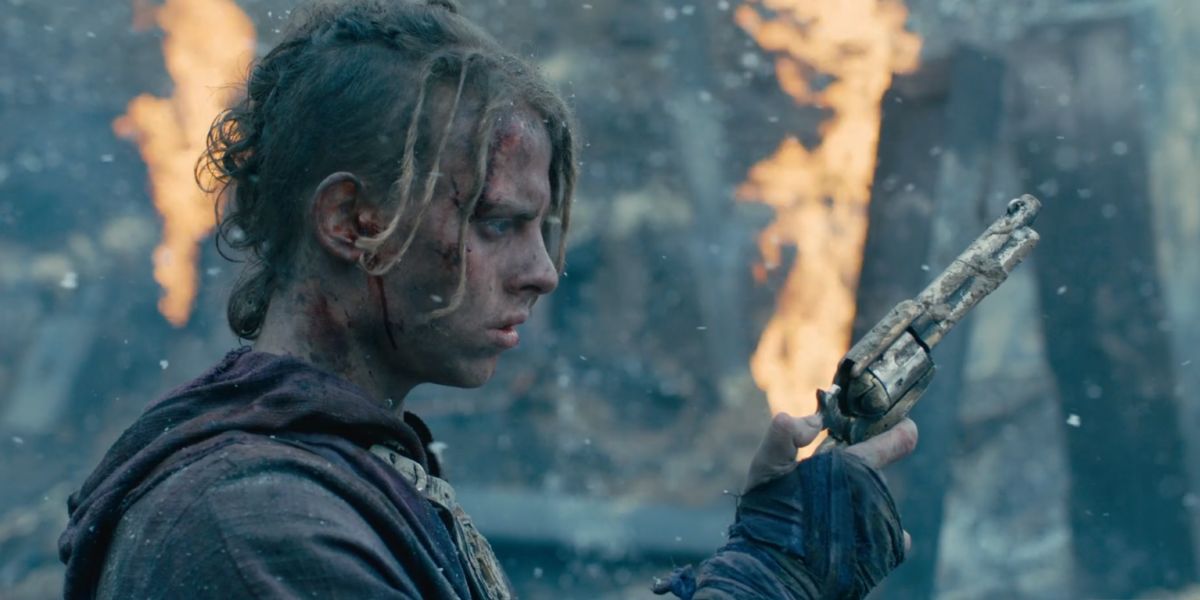 We know from the history of the Badlands that guns existed during our time, but that they were eventually outlawed and society reverted back to swords and bows so people could defend themselves.

I’ve seen fans wondering if we’d ever get the introduction of guns on the show, and if I’m being honest, I’ve always shied away from this possibility. I love Into the Badlands‘ aesthetic and it would be a shame to see that challenged by a weapon which would so clearly dominate what we have grown accustomed to.

That being said, we’re hanging on by our fingertips here. I want, so badly, for this series to get renewed in one form or another. Introducing guns is a bold statement that would once again change the dynamics of this show. Where each season has grown larger and shown us more of this world and its history, season 4 and the introduction of firearms would continue that tradition in such an interesting and complex way.

Guns are, without a doubt, a talking point in this day and age. Into the Badlands has already showed us it’s willing to make political statements, and I’m curious to see how the show and our favorite characters would handle this new wrench in the system.

More than ever before, I want to #SaveTheBadlands. We’ve already talked at length on Hypable about why Into the Badlands is such an incredible show, and I think anyone who watches even just a few episodes can understand why this series has gained such a devoted following.

But imagine what twists and turns are in store for our heroes if only someone would take a chance on Into the Badlands season 4. If that’s not an option (hashtag bureaucracy), then I hope we can one day get a graphic novel or movie to continue the story. 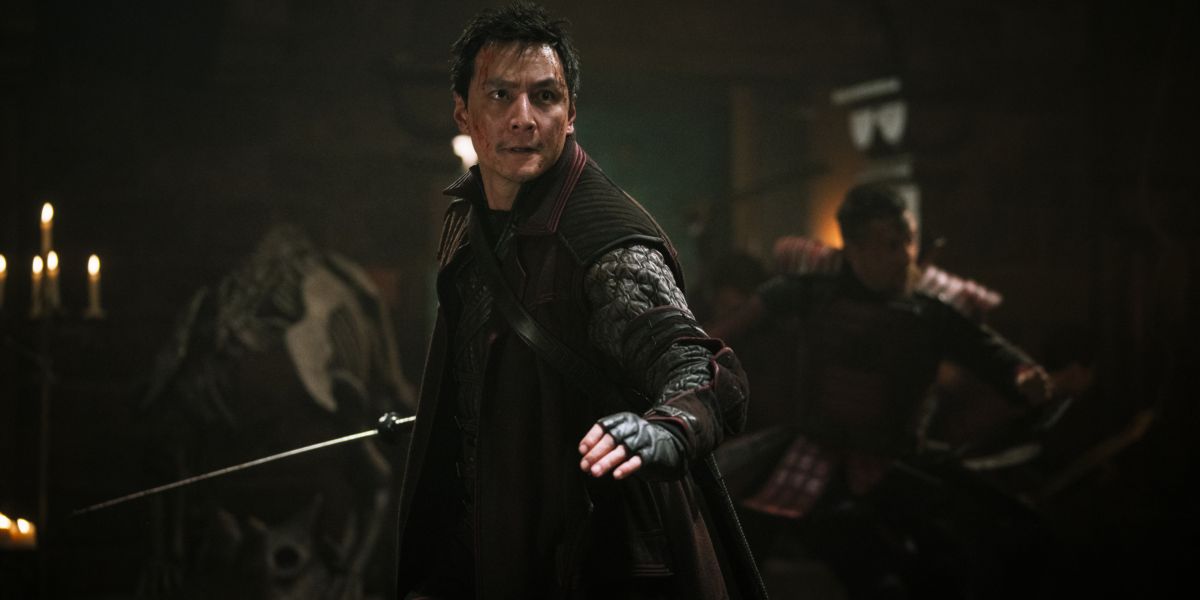 Are you upset ‘Into the Badlands’ season 4 won’t be happening?

WB and DC Films are backtracking on their decision to green light New Gods and Aquaman spinoff, The Trench.

The upcoming Catherine Called Birdy adaptation has added Joe Alwyn and Dean-Charles Chapman to its cast.