Look no further for your next action flick than Gunpowder Milkshake. It’s bright, it’s flashy, and it’s full of stunning choreography to keep you entertained for the next two hours.

Though it provides an over-the-top almost slapstick quality to the fight sequences and line delivery, the plot is heart-wrenching and believable, the stakes are high, and the interpersonal relationships ground it in reality.

Without further ado, let’s break down the best elements of this thrilling new Netflix feature. 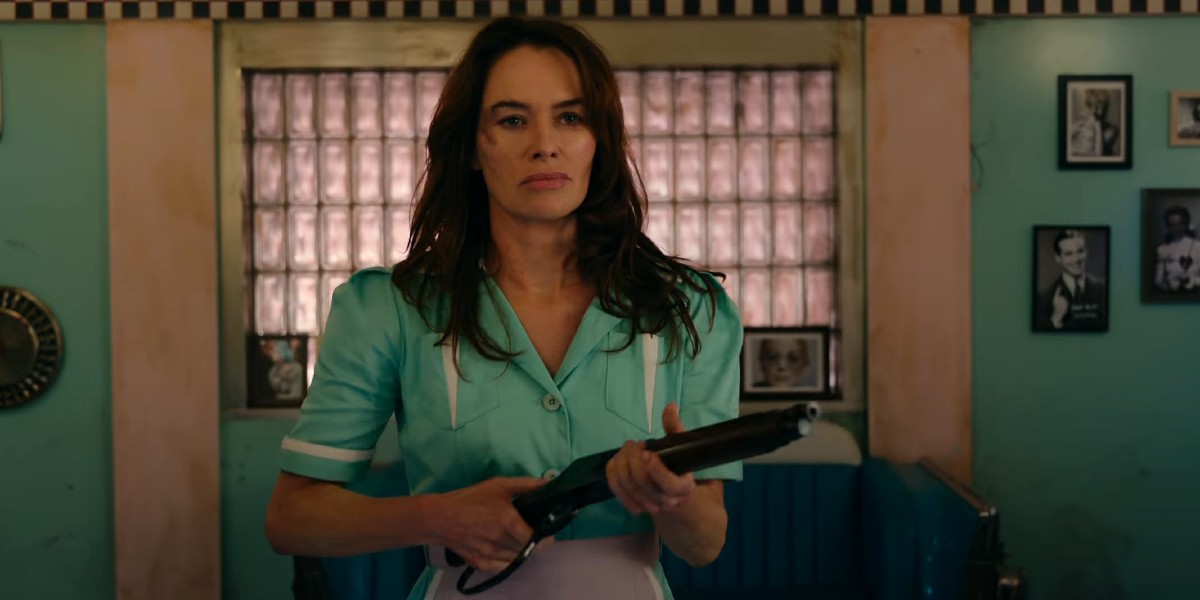 If you could ever call a movie neo-noir, it would be Gunpowder Milkshake, though I would argue neon-noir or electric-noir is a bit more on the nose.

This film offers plenty of callbacks to its time-honored predecessors, while making updates for its newer and younger audience. It casts long shadows over Karen Gillan’s face, leaving no doubt she’s a lone wolf on the brink of losing her pack. Yet, the film acts as a set of neon lights, reminding her (and, by association, us) that some jobs aren’t worth the payout, some wrongs should be righted, and being alone isn’t always the best way to survive the night.

The filmmakers have somehow made Gunpowder Milkshake a dark action-thriller that’s equally bright and, dare I say, fun. Much of this is thanks to its incredible cast of women, who carry both the action and the drama on their steady shoulders, offering us bits of humor to maintain levity throughout.

Wide shots force you to take a moment to breathe, to see the whole picture. The lighting department worked overtime for Gunpowder Milkshake, infusing each frame with an array of brilliant colors that dance across the screen. Even ignoring its plot, you couldn’t call this movie boring for the sheer beauty of every camera angle.

'Jumanji: The Next Level' movie review: All the same heart, a whole new adventure

The costume designers knew what they were doing when they put Michelle Yeoh, Angela Bassett, and Carla Gugino in vintage suits and handed them laughably enormous guns. The modern-meets-retro aesthetic ensures this film is timeless and classic in its look and feel.

It you want a visually stunning piece of production that packs a punch, then you need look no further. 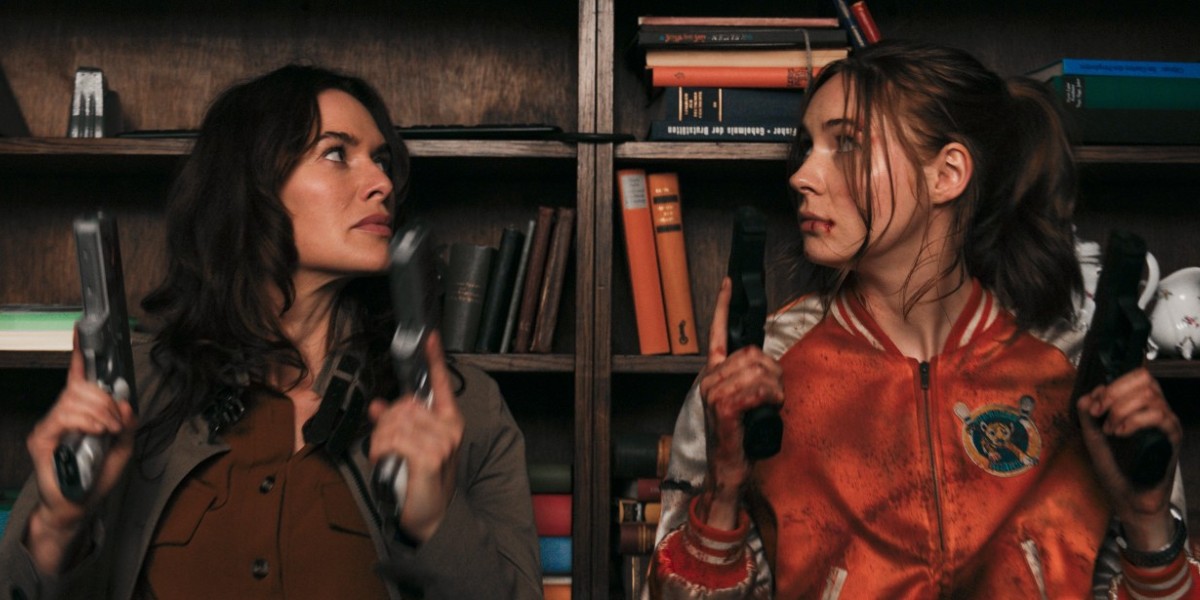 Any time I write about an action movie, I will undoubtedly turn to the fight choreography to gauge its credibility, and this Gunpowder Milkshake review is no exception.

There are several elements of the choreo I look for specifically, but one of the most important is that a film uses wide shots and long cuts to put their actors and the action on full display. Though Gunpowder Milkshake didn’t have a 10-minute one-shot like Atomic Blonde, it wasn’t afraid to let Karen Gillan and Lena Headey show off their skills.

While several scenes involved shootouts, there was plenty of hand-to-hand combat using a variety of weapons. I also look for ingenuity when it comes to the fight sequences, and I particularly enjoy when characters must find creative ways to use props or set pieces to their advantage.

There are a number of times throughout the movie when Karen Gillan is forced to think on her feet. Unarmed and undeterred, she finds a myriad of ways to take down her opponents, and some of the best shots of the movie include the moments when her back is against the wall.

In fact, this is where a bit of the slapstick comes in. Moments such as these are hard to balance—you want it to be funny, to add some levity, to give your character a bit of pizzazz, but you must always keep the stakes high. One wrong move, and our hero dies.

Somehow, Gunpowder Milkshake finds a equilibrium between over-the-top action and heart-pounding physical and emotional uncertainty. You find yourself sitting on the edge of your seat until the smoke clears, and you only laugh when you know it’s safe.

If films like Wonder Woman or Atomic Blonde bring you to tears because you love seeing women kicking ass and saving the world, the final battle in Gunpowder Milkshake will undoubtedly have the same effect. 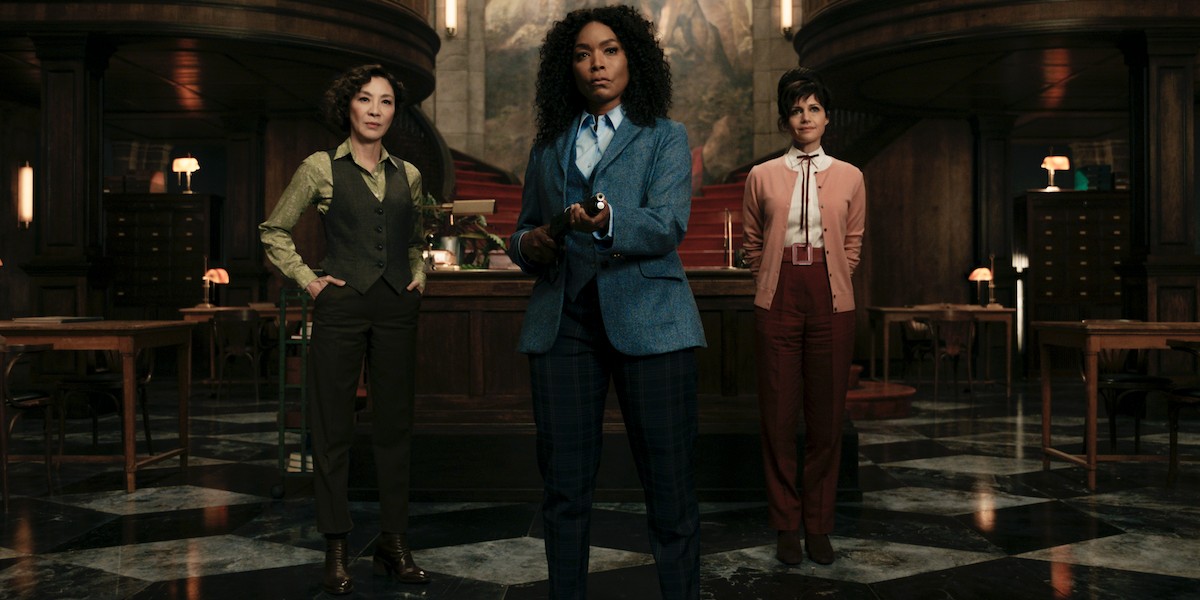 It’s almost a crime to place this section at the end of my Gunpowder Milkshake review, but the characters in this film have taken on the anchor leg position because they are the strongest element of the movie.

First and foremost, Karen Gillan would’ve carried this movie no matter who else had been cast. It feels like her performance as Nebula at least informed Sam’s personality in the beginning—gruff, emotionless, and ferocious with a dash of dry wit.

Beyond the first third of the movie, Sam evolves into a more nuanced character. Yes, she’s an assassin, but she wouldn’t leave behind a little girl. She has regret for some of her actions, even while she’s mowing down dozens of men. We call this depth.

Sam’s story is elevated with the addition of Lena Headey as her mother, Scarlet. She’s older and wiser, but that doesn’t mean she lives without her own remorse. Years apart have made these two women strangers, but the relationship between a mother and daughter is difficult to kill.

And then there are the librarians. Angela Bassett plays Anna May with a ferocity justifying her strength, Michelle Yeoh’s Florence always has her eyes and ears attuned to the ever-pressing danger surrounding them, and Carla Gugino’s Madeleine has a sentimental heart which must be a rare find in their line of work.

At the end of the day, they’re all human. They may be able to cut down a man with a machine gun, hammer in his head, or choke him out with a chain, but they’re fully realized people with histories, emotions, and vulnerabilities we don’t often see from secondary characters such as these.

It would easy for a film like Gunpowder Milkshake to fall into the trappings of the strong female character. Sometimes female action heroes are simply women cast into a role written for a man, and while these types of movies aren’t all bad (I have certainly enjoyed my fair share of them), it’s refreshing to see Sam open herself up emotionally in a way that men in these roles often don’t.

And while the men are forgettable (including, I’m sorry to say, Paul Giamatti, though this is more a product of the movie than his performance), young Chloe Coleman holds her own as Emily, the little girl who’s been thrown into a living nightmare. She gets plenty of moments to shine, and her relationship with Sam carries the movie forward on more than one occasion.

So, if you only have one takeaway from this Gunpowder Milkshake review, it’s that this film is worth every second of its one-hour-and-fifty-four-minute runtime. And while the film comes to a definite conclusion, there’s plenty of room for a sequel. And I’ll be first in line (metaphorically speaking) to see it, if and when it hits Netflix in the future.

Do you agree with our ‘Gunpowder Milkshake’ review?