On Gossip Girl season 1, episode 2, Audrey Hope struggles to get her mom, Kiki, to show up for her. Meanwhile, Zoya and Julien deal with the aftermath of their fight and what’s going on with Obie.

Gossip Girl season 1, episode 2 picks up with Julien and Zoya at odds after the events of the pilot episode, unsure exactly how to go on with their lives at Constance Billard. But while Nick (Zoya’s father) may have become aware of Zoya and Julien’s true relationship, Davis (Julien’s father) is still in the dark… until the school fundraiser, that is.

Meanwhile, the students fight back against Gossip Girl, leaving Kate and the other teachers scrambling to restore their credibility before Gossip Girl’s permanent cancellation. 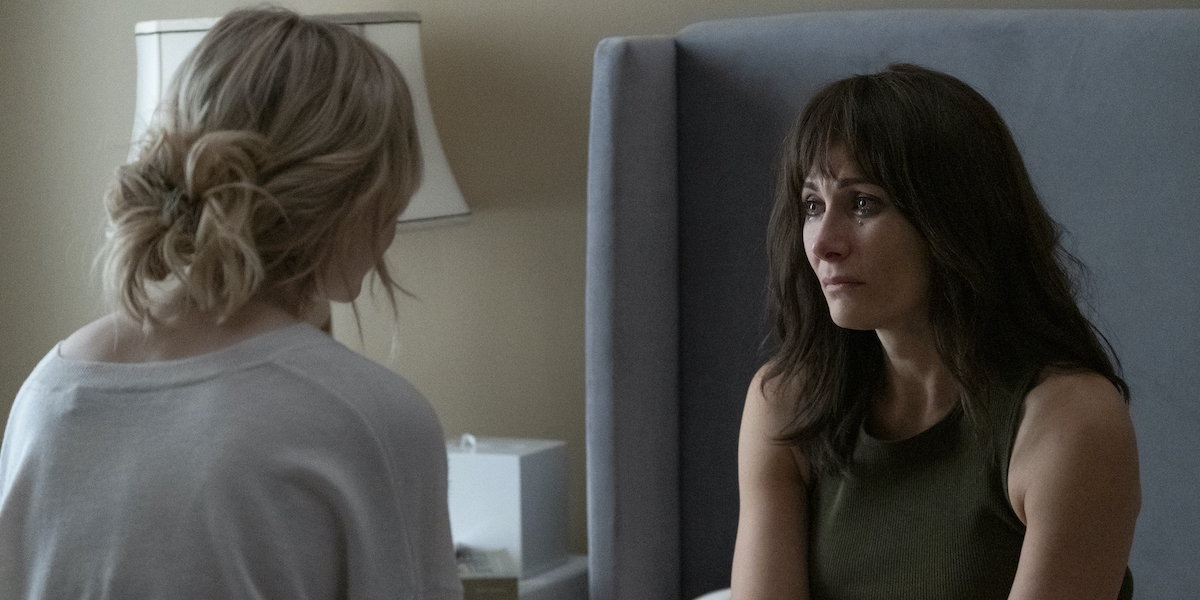 Gossip Girl season 1, episode 2 isn’t much of an improvement from the initial outing, but there is some. Unfortunately, I’m hooked… though that may be more from the concept of the show, which really does have an enormous amount of potential.

There are some aspects that just aren’t working, like this rivalry between Julien and Zoya and Max Wolfe as a whole, but the characters are being fleshed out well. Even after two episodes, we have a good idea of who several of these characters are, which makes their actions harder to understand.

I will say the show is fully exceeding my expectations. I went in with the bar on the floor, considering some of the teen dramas that have been released in recent years. (Ahem, Riverdale.) There’s still some cringey dialogue, but the stories are at least trying to reflect life as a modern day teen (with some very clear exaggerations).

My hope is now raised that the improvements will continue with each episode, especially after where we leave off on Gossip Girl season 1, episode 2. 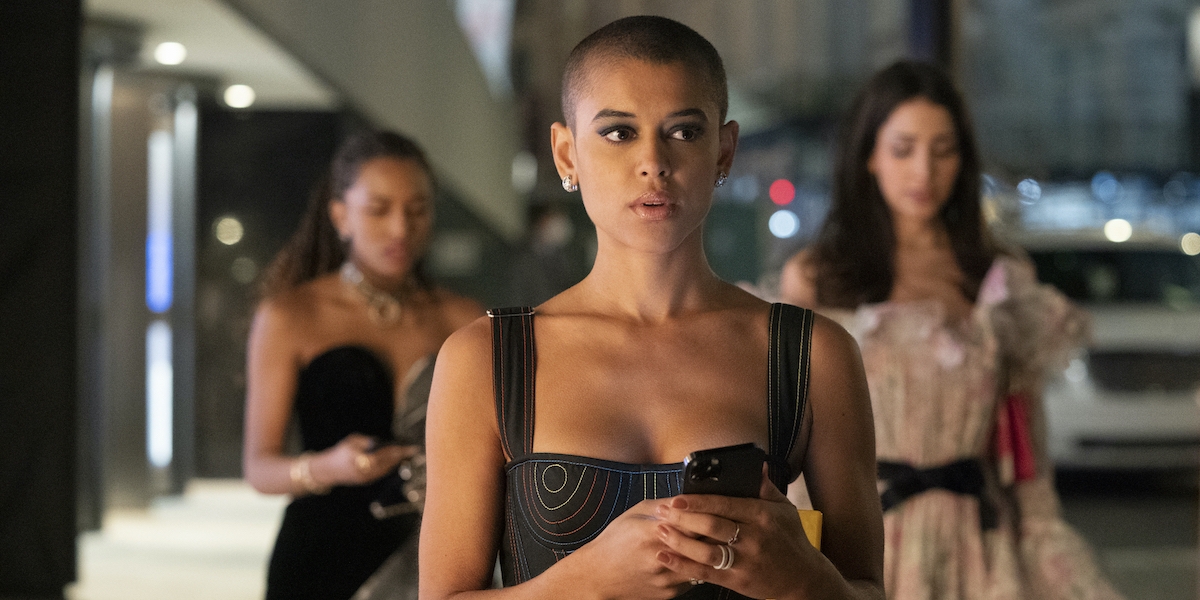 The fact that Zoya and Julien’s fathers kept them separated their entire lives because of a petty rivalry and their treatment of the mother as property that could have been “stolen” is incredibly pathetic and just so sad for these girls. They’ve missed out on so much time together, so much bonding that could’ve been done, and the mere memory of their mother that lives within them.

It shouldn’t have had to be a secret that Zoya was moving to New York City to attend Constance Billard or that Zoya already knew her sister quite well… Davis and Nick should’ve just gotten their shit together and supported their daughter regardless. Any way, at least it seems we’re on a better path now that the truth is out. 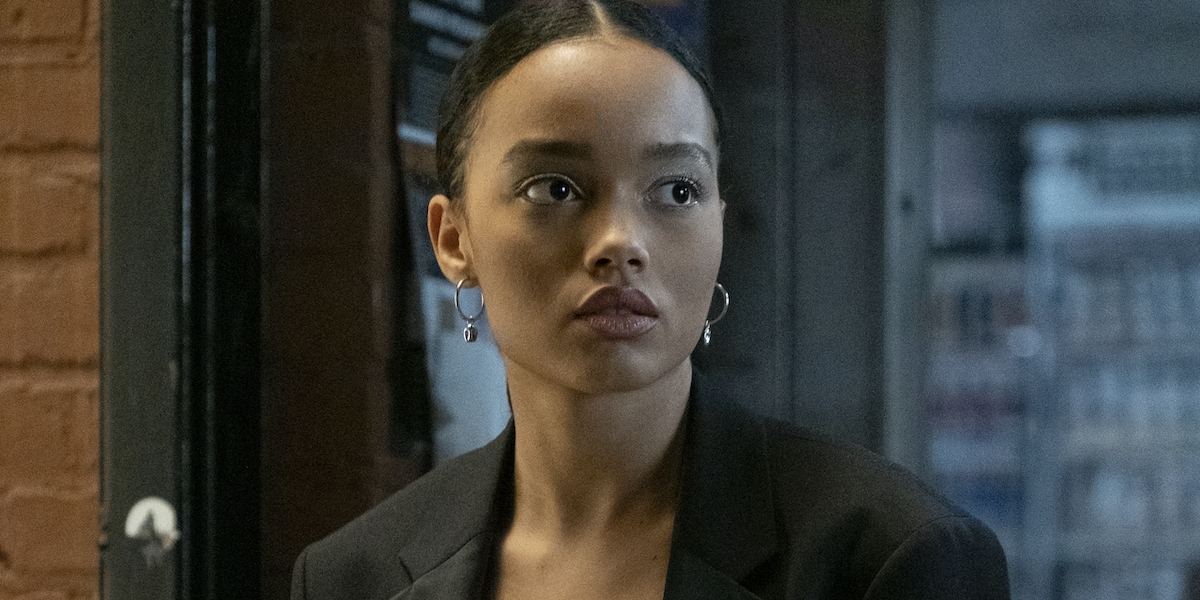 However, the already intermittent rivalry between Zoya and Julien is tiresome. Let these girls just be sisters and have a good relationship. Julien has a father that seems to be all but completely absent and two friends that seem to care more about the business than they care about Julien, so the advice she’s getting from any of them is not helpful or truly supportive.

(That said, I hope we see more of Monet and Luna soon to get a better idea of who they both are and what’s really motivating their actions.)

Meanwhile, Zoya doesn’t really have anyone. She has no friends, her favorite teacher is perfectly content to tear her down on social media, and her dad is too caught up in his dislike of Davis to let Zoya be honest about how she feels for Julien. She desperately needs someone good in her life.

The only person she slightly has on Gossip Girl season 1, episode 2 is Obie, and these two are quickly becoming such an amazing couple. They clearly have so much in common and want to do good in the world. They’re such a good fit already. It’s a shame that Obie had something serious with Julien first because it’s forever going to loom over their relationship, as well as Zoya and Julien’s. 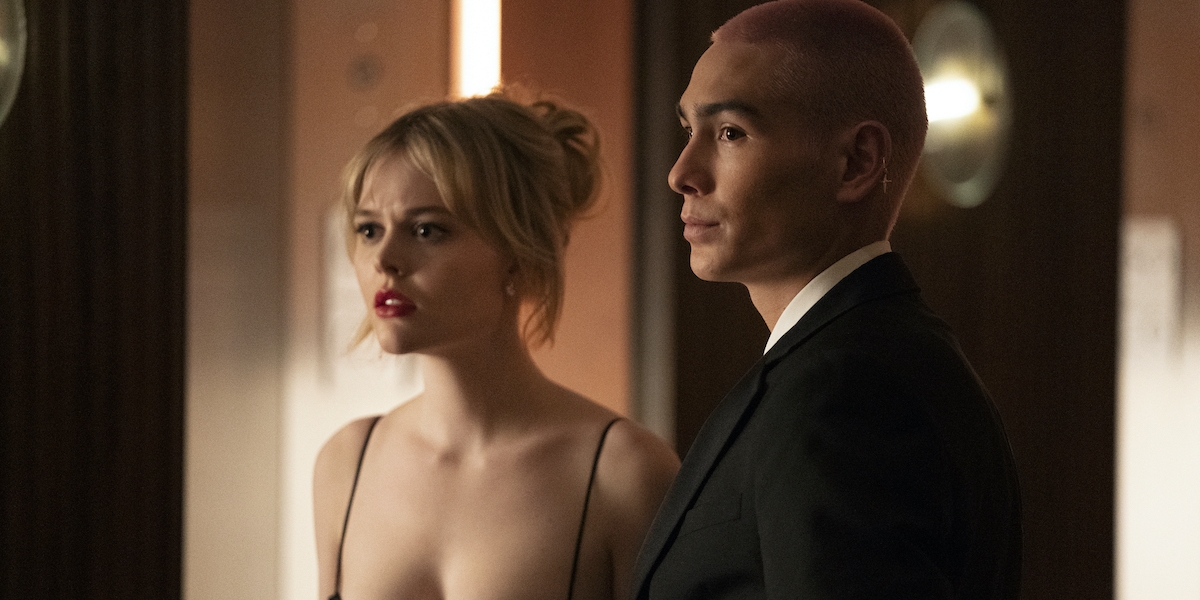 After the pilot where Audrey and Aki felt like an afterthought from the writers, it’s nice to dive in a little and get a sense of what’s going on between them on Gossip Girl season 1, episode 2.

Audrey Hope is quickly becoming one of my favorite characters, as we see how much she’s struggling at home, post-divorce, with her irresponsible and despondent mother. Audrey isn’t anyone’s primary focus, which is just so sad. She’s taking care of her mother, and it seems like Audrey has really changed since her father left her mother for the assistant.

Laura Benanti is such a brilliant hot mess though, here’s hoping Kiki appears in several future episodes. There’s some real potential for some mother/daughter bonding, especially given the financial hardships on the horizon. How are they going to continue living their lavish lives if bankruptcy is forthcoming?

However, this episode really has me questioning whether Audrey and Aki even work as a couple. There’s no spark there, really, and it’s hard to really care for them when they started the show with eyes for someone else. Aki has something he needs to explore, as does Audrey, but is this something they really need to do together?

Their relationship is headed toward becoming a polyamorous situation, but the writers didn’t really do anything to cement Audrey and Aki first. As individuals, they’re both enjoyable, but it kind of just seems like they should break up to do what they want to do… instead of cheat with the same man on separate occasions. 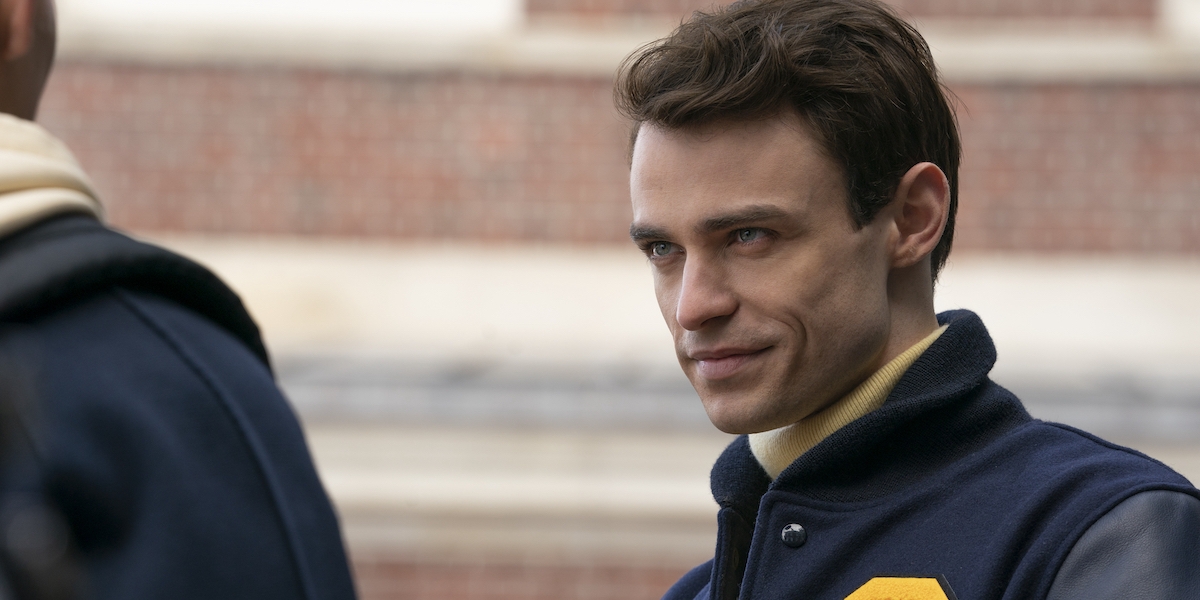 The Max Wolfe situation feels like an updated version of Chuck Bass. (And by updated, I mean not straight.) Yes, beauty is subjective, but the obsession characters have with Max doesn’t make any sense because he’s not as appealing as the writers are making him out to be, particularly because of his entitled attitude. It’s exactly like Chuck who had girls falling off of both arms and clawing others’ eyes out to get with him when he was, frankly, a piece of shit.

Max isn’t any better, and clearly follows in Chuck’s footsteps when it comes to not taking no for an answer. At least Max hasn’t physically tried to force himself on anyone, but the way he’s basically stalking his teacher and trying to wear him down is vastly inappropriate and gross.

The message we should be receiving is to take “no” for an answer, not to harass someone until they give in. Max asking Aki for his consent moments before felt incredibly forced and not in-character at all because of Max’s actions immediately afterward.

That said, it’s not just one-sided. The teacher could be doing more and not talk about fucking his students or whisper inappropriate things. He’s the authority figure here and, to some extent, has power to shut this down. But he’s getting off on it, just like Max is. It’s wrong on both sides, and really isn’t something we need to be watching.

It’s 2021, y’all. We don’t need another perpetuation of the “predatory gay” stereotype on television, or to feed into the teacher/student trope that we should’ve left behind with Pretty Little Liars… which is clearly where this is headed.

It’s disappointing that this is the approach they’re taking with Max, who could’ve actually been a very enjoyable character. He has charm and a certain amount of swagger, but sadly, his character can be summed up with one word: Dick. Safe to say, I don’t like him so far. 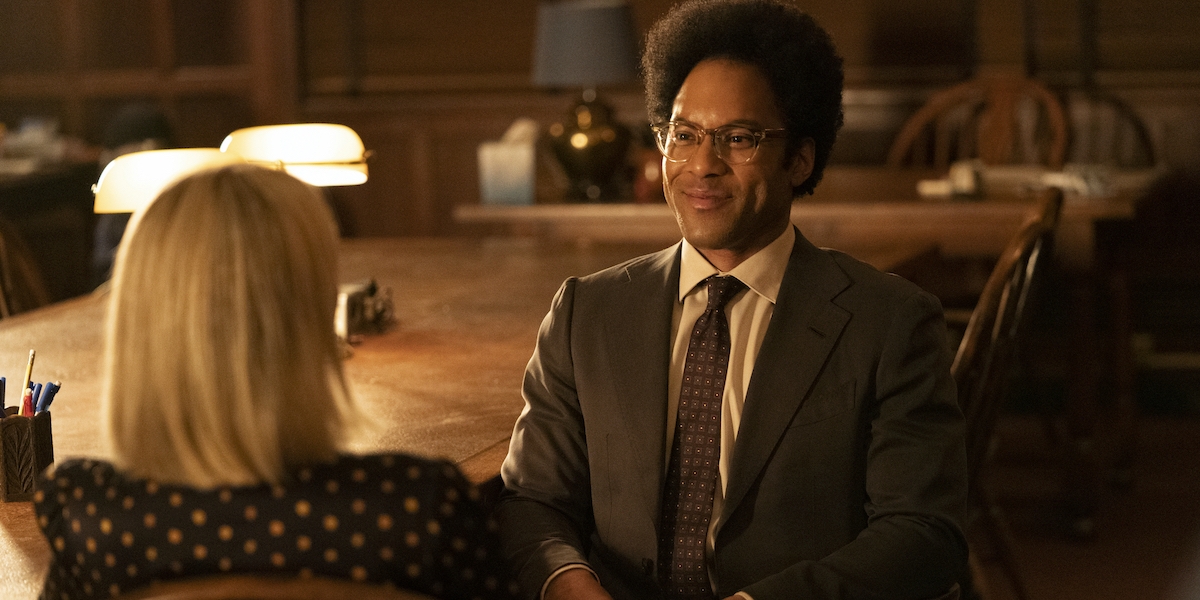 While the teachers being Gossip Girl is interesting, it’s certainly hard to care at all for them on Gossip Girl season 1, episode 2. I really want to like Kate, but what she’s doing to these teenagers with her pals is just so screwed up. How far are they going to take this?

It really feels like the teachers are going to be getting too much attention over the season. The focus on the pilot episode was understandable for us to see why Gossip Girl is up and running again and who’s behind the screen causing mischief. But to make them main characters and for us to see their struggles with it… I don’t think so.

Nobody is here watching and encouraging these teachers to keep going. Nobody is on their side here, and watching their growing pains is not going to make anyone come over to their side. Being bumped down to recurring characters would be just fine, as the characters being gossiped about are the reasons we’re here.

(By the way, did anyone else pick up on that vibe between Kate and Zoya’s dad? Certainly seems like something could happen there, but the drama if he ever found out what she’s doing to his daughter… Let’s see it, Gossip Girl writers.)

All in all, the show is at least enjoyable despite the flaws, which is not something every show has. Sometimes it’s a mess, but the original show was kind of best when it was a complete and utter mess. It fit with the goings-on in the characters’ lives.

There’s still a great amount of room for growth after Gossip Girl season 1, episode 2, but I won’t hold my breath for this show to live up to its potential.