‘Game of Thrones’ 8×02 review: You can rest when you’re dead

Game of Thrones 8×02 was low on action and sky-high on feelings. Here’s our review of “A Knight of the Seven Kingdoms.”

The episode began with Jaime’s trial (such as it was.) Dany was super pissed, but between the weight of Bran’s silence and Sansa’s faith in Brienne’s pro-Jaime testimony, Jaime was allowed to join the forces of the living. Dany took her anger out on Tyrion, but relented on Jorah’s advice. She also conferred with Sansa in a welcome moment of amity that quickly snagged on the fate of the North. Theon Greyjoy returned to fight for Winterfell’s forces, and also have some unexpected romance vibes with Sansa, because why not?

Jaime traipsed around Winterfell in the thick of battle preparations, having meaningful conversations with Bran, Brienne, and Tyrion.

As even the fiercest women and children are ushered into the Winterfell crypts (the “safest place in the castle,” yeah, we’ll see) Tormund, Beric, and Edd return with the news that the dead will reach Winterfell before the next sunrise. “Whoever’s not here now is with them,” Tormund says. 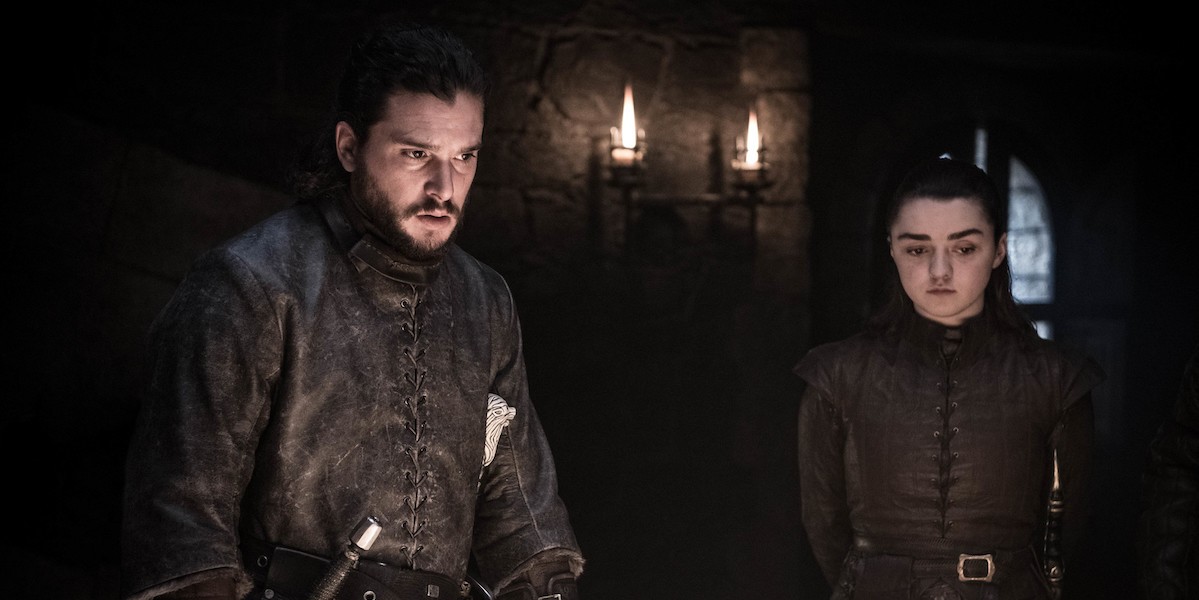 With the apparent endgame at hand, the forces of Winterfell settle down to wait — and talk, a lot. At their final war council, Bran proclaims that he will wait in the Godswood to lure out the Night King for Jon and Dany on their dragons. This… will definitely go as planned. Meanwhile, Jon is ignoring Dany because he wants to brood about his mom and dad.

Grey Worm and Missandei vow to get away from these Northern racists and return to protect Missandei’s home island of Naath, while Tyrion listens to Bran’s story. Sam rejects Jon’s offer to hide in the crypts and shares memories with Edd. Sam also gives Ser Jorah his father’s Valyrian steel sword, Heartsbane.

Arya receives her superweapon and jumps Gendry’s bones, lest she die a virgin. Tyrion ropes Jaime, Brienne, Podrick, Davos, and Tormund into what seems to me an ill-advised pre-battle drinking sesh, full of hopeless ruminations on imminent death, unlikely survival, and punctuated by Tormund’s attempts to proposition Brienne. The whole thing culminates in Jaime finally conferring knighthood upon Brienne, and I’m very emotional right now. Pod rounds off the evening by singing a mournful, lovely chorus of the song “Jenny of Oldstones.”

'Game of Thrones' 8x02 review: You can rest when you're dead

Finally, Dany and Jon meet before Lyanna’s tomb, where Jon confesses his true identity. Dany reacts about as well as expected to learning that she is, in fact, second in line to the Iron Throne and not its rightful heir. But before the two Targaryens can pursue the matter, the war horns begin to blow.

The army of the dead surrounds the walls of Winterfell. Fate is in the offing, and it has spears of ice and endless hoards; Winter, in all its deadly cruelty, has truly, finally, come.

Game of Thrones 8×02, “A Knight of the Seven Kingdoms,” is a bit of a gambit on the show’s part. It’s 58 minutes of buildup and anticipation, all dialogue and virtually no action. Its climaxes are entirely emotional, and its concerns mostly cerebral.

Tyrion’s character is a strong representation of the episode. With his wit having failed him, greatly fallen in Dany’s esteem, Tyrion offers to fight in the coming battle to prove his worth. But Dany rejects this, recognizing that Tyrion’s real value lies in his mind. There will be time for brawn and battle (next week, in fact) but for now, it’s time to let the brains do the talking. 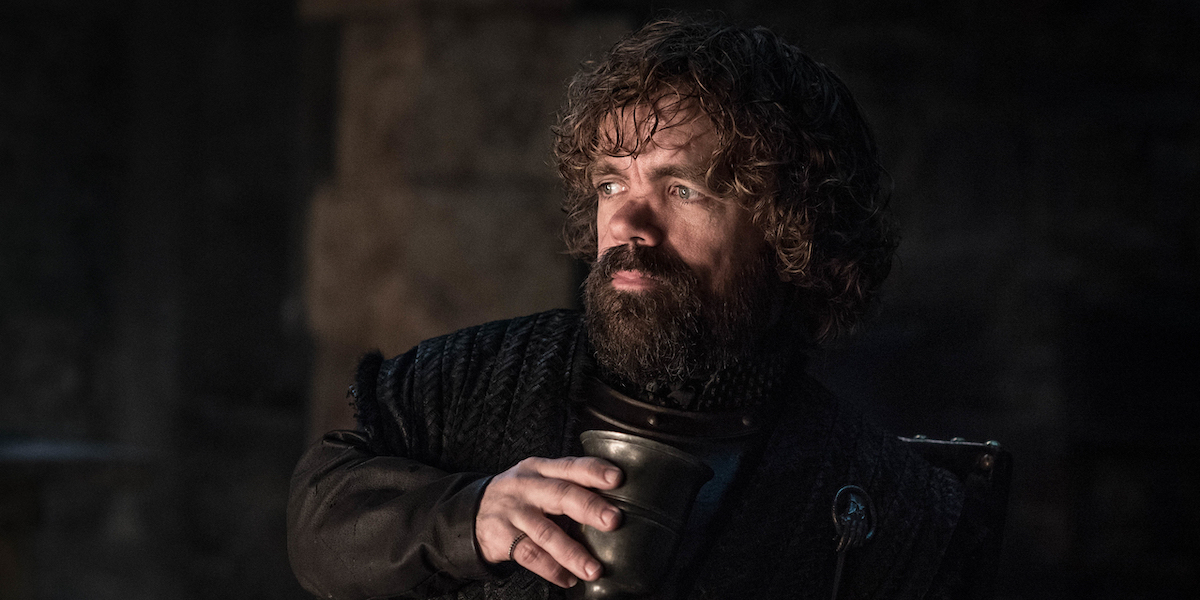 Tyrion’s results may be mixed, but Game of Thrones‘s are not. “A Knight of the Seven Kingdoms” is a mostly reverent ode to the series’ most valuable commodity — its characters. The show has never lacked for the epic or tragic, but its most profound moments are unfailingly those staged between the men and women of this brutal world as they contemplate their cold reality.

The specter of imminent death and endless darkness only sharpens the piquancy of these interactions; Game of Thrones has always been a bleak affair, but this episode plays as a farewell for many who will surely be lost soon, and the in-world understanding of this reality lends a painful honesty to the entire experience.

Related: Nobody should win the Game of Thrones

It was perhaps a risk to stage Game of Thrones 8×02 as pure character drama, but its dedication to the form pays off. It would feel almost profane to mar the “A Knight of the Seven Kingdoms” with a meaningless skirmish or minor sortie; Jon and Daenerys, Arya and Gendry, Brienne and Jaime, Tyrion and Davos — none of these people have the luxury of action. There is present, the waiting, the tension of unrealized decisions. It seems only right that we should join them in these last hours before the Night King’s storm finally breaks.

There’s a lot of good in Game of Thrones 8×02, frankly. Tyrion and Jaime’s refreshingly frank conversations about their lives since last visiting Winterfell — “I was sleeping with my sister and you had one friend in the world, who was sleeping with his sister,” Jaime muses wryly — offers a sense of completion to the long Lannister arc. Sansa and Dany’s moments of bonding are also strong, and though it ends badly (with further complications ahead) at least the two women have clarified the exact point of their disagreement.

Even Bran was almost shockingly lucid through the episode, finally able to contribute something more to the proceedings beyond vague murmurings of fate and history. It’s been a net loss to Game of Thrones that Bran’s character has been subsumed into the role of the Three-Eyed Raven, but Bran as mythic bait for the Night King is a compelling prospect — and the dialogue surrounding the Night King’s ultimate goals is some of most melancholy and lovely that the show has offered.

But really, one interaction rises above the rest — that which gives “A Knight of the Seven Kingdoms” its name. Jaime’s decision to knight Brienne, and her acceptance of the title she has so long been denied, is a wildly powerful resolution to both Brienne’s hopes and Jaime’s ongoing struggle with his knighthood. It’s as joyous and honest as a birth, and an expression of love between the two warriors that couldn’t have been spoken in any other way.

It’s also a hopeful act for Westeros, a continent so long locked in the harmful gender roles that have defined so many characters. With the inevitable tide of change brought on by the Night King, perhaps something good will come from all these endings.

Of course, fans should keep in mind that Brienne achieving a lifelong, un-dreamed-of goal puts her in an awkward position for survival in next week’s inevitable bloodbath. But we’ll always have “Arise Brienne, knight of the Seven Kingdoms,” right? They can’t take that away from us.

This may prove controversial, but Arya’s decision to have sex with Gendry was hard to swallow. It’s an odd scene from the start, with Arya peppering Gendry with questions about his prior sexual partners (it seems strange that she cares) and seemingly out of nowhere proclaiming that she does not want to die a virgin.

It’s all a bit paint-by-numbers — the young waif who wants to “experience life” before she dies — and it doesn’t feel quite as well-earned as it should. Arya has been a largely sexless character throughout Game of Thrones, and while it’s rewarding to see her acknowledge feelings for Gendry, her businesslike eagerness to jump into bed (or whatever they do it on) is more jarring than sweet.

Perhaps it’s a meta thing — the result of watching Maisie Williams grow to adulthood on the show, and the fact that Joe Dempsie is just as many years older than her as he was when they first met. But while in the abstract I’m all for Arya and Gendry acting on their feelings, the ultimate presentation of their union fell flat.

Deaths: None. Enjoy it while it lasts.

Sex and romance: Oh, boy. Jon and Dany’s relationship is (literally) up in the air with the latest reveal. Arya and Gendry are full-speed ahead, at least until one of them dies. Jaime and Brienne copulated through their eyeballs and words, Grey Worm and Missandei are going strong and must be protected, and am I crazy, or did Theon and Sansa express their love through loyalty and soup?

Arya: I know death. He’s got many faces. I look forward to seeing this one.

Brienne: We have never had a conversation last this long before you insulting me, not once!

Sam: That’s what death is isn’t it? Forgetting. Being forgotten.

Bran: It’s a long story.
Tyrion: If only we were trapped in castle in the middle of winter with nowhere to go.

Tormund: They call you King-Killer.
Jaime: I’m sure someone does.

Tormund: That’s how I got so strong. Giant’s milk.
Davos: …Maybe I will have that drink.