Enver Gjokaj talks bringing ‘Agent Carter”s past to the present on ‘Agents of S.H.I.E.L.D.’

Enver Gjokaj tells us about reviving Daniel Sousa on Agents of S.H.I.E.L.D., and the perks (and perils!) of returning to the Marvel universe.

When Marvel’s Agent Carter was canceled after only two seasons, fans were left not only with considerable disappointment, but bunches of lingering questions. Four years later, the final season of Agents of S.H.I.E.L.D. has, through a few twists and turns of time travel, swooped in to tie off at least one of those lingering threads — the fate and further history of Agent Daniel Sousa.

After a two-episode tango in the 1950’s, Agents of S.H.I.E.L.D. neatly plucked Sousa out of the timeline and thrust him into the adventures of the modern S.H.I.E.L.D. team. Actor Enver Gjokaj shares his take on Sousa’s situation, and what comes next for the stoic S.H.I.E.L.D. founder as he grapples with his new role in what is, quite literally, the history of the world.

What was it like to revisit the character of Sousa after almost five years?

It was wonderful, from beginning to end. It was such an unexpected little treat to be able to revisit this character for a shorter period of time. And also not worrying about all the things [that come up] as an actor, like creating a new character. Usually you’re freaked out on set. This, I knew exactly what they wanted. It was a character I had done before, so it was a fun job to just jump in and pick up the bike and start riding again!

Did you implement any changes to the character since we’ve last seen him in Agent Carter?

Yeah, I talked to the showrunners, and they made it clear that they wanted Sousa to be farther along in his progression and more settled in himself, and a bit more of a 007. They were imagining that he has seen things, and done things, and has turned into a bit of a badass since we’ve last seen him. And that was really fun, because I think even within Agent Carter there was a bit of a progression from the first season to the second season, you saw him coming into his own. And this continues that progression, so in my mind it seemed to fit perfectly.

So Sousa is now suddenly 20 years in the future with a bunch of strangers who are 50 years in the past. How is he going to cope with all this craziness?

Well, there’s two different things. There’s how Sousa’s reacting, which is going to be not well. You’re going to see him struggling with being out of his own timeline. That’s not something that just becomes easy for him. The other thing is, how enjoyable it is for me as the actor to play it. It was just about one of the most fun jobs I’ve ever done. Being able to play a man out of time means that everything’s fair game, and I was a kid in a candy store, for sure. 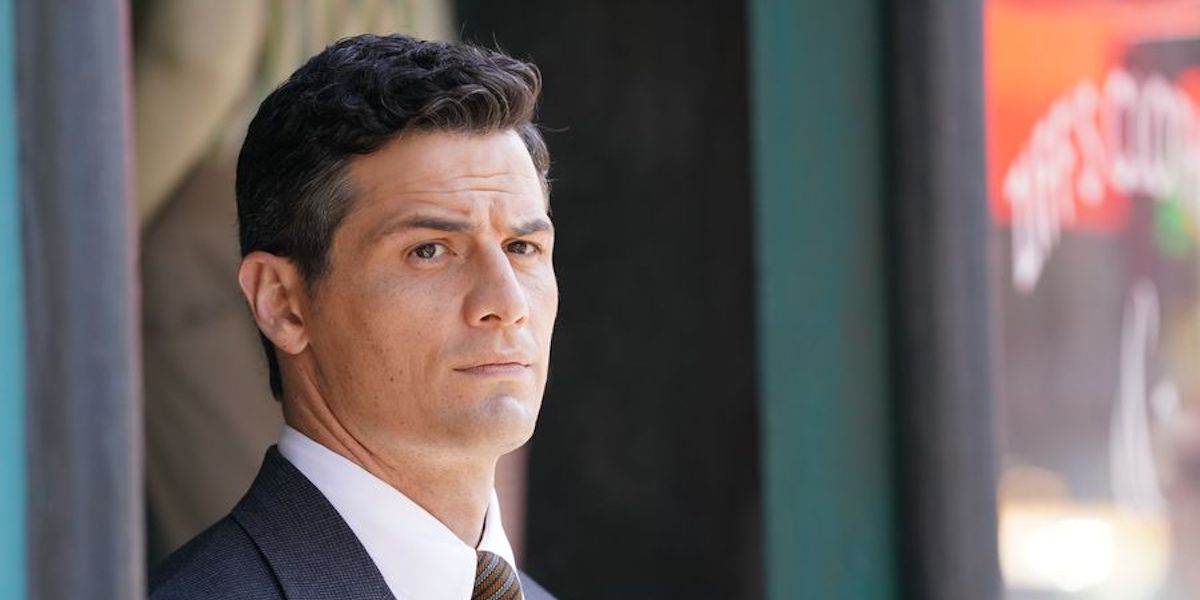 I think you’re going to see Daniel, first of all, struggling to be a part of the team, or S.H.I.E.L.D., and go from being at the top of the S.H.I.E.L.D. organization in his time to not really having a clue what’s going on in this time. So that’s part of his struggle, and I think that bleeds into his interaction with the team members for sure.

Are there any relationships that might go well? Any conflicts that pop up?

Coulson is a fan of Daniel Sousa, so I think that’s a good relationship from the beginning. There’s going to be… the writers did a really good job of creating a specific dynamic between each of the characters, but I think Deke definitely gets under his skin a little bit.

As he does with most people.

As he does with most people! You can imagine that Deke and Sousa weren’t best friends.

It looks like Sousa and the team have somewhat different goals at this point. He’s focused on taking down Hydra, while the team is more or less letting Hydra be, and focusing on the Chronicoms. Will there be any tension there?

Well, you touched on it right there. He obviously has allegiance to his time and the people he loves and the organization that he built in his time. So you’re gonna find him in this next episode missing his time, and also feeling allegiance to that timeline. 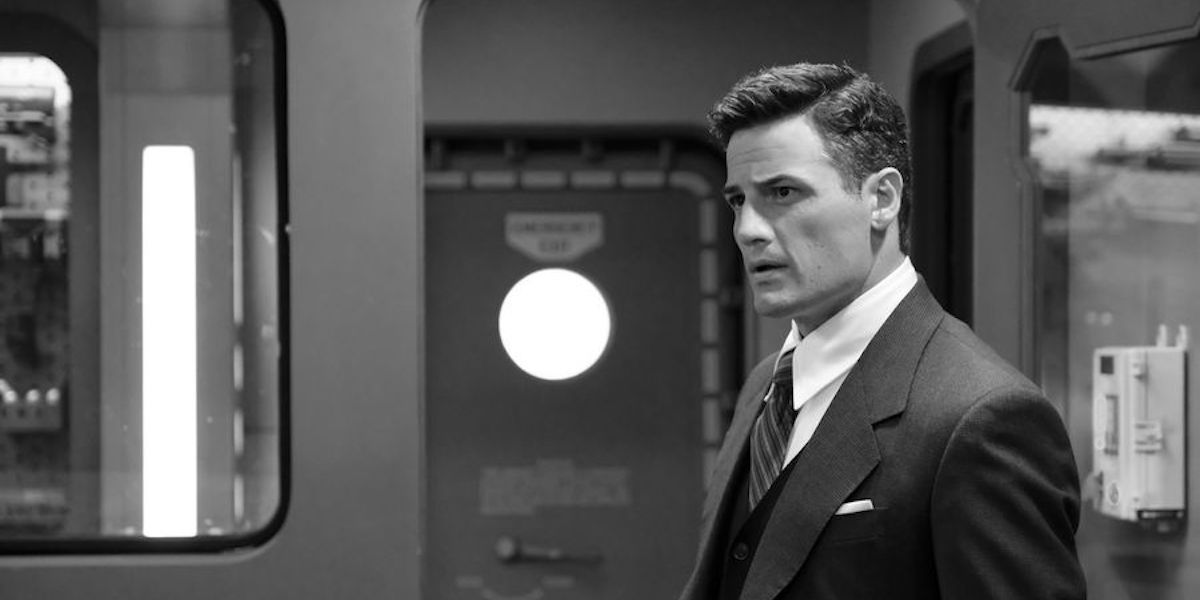 Fans are very curious where things stand between Daniel and Peggy in 1955. Do you have any info on that, or is it a mystery to you, too?

Oh yeah, they don’t tell me nothing! I think somebody, somewhere at Marvel HQ knows all of the details. I just have to decide as an actor what the story is for me, so that it makes sense for me to play it. And so I just assume that we haven’t seen each other in a little while, whether that means it was business as usual or that something had changed, I kind of don’t know.

And is it possible we’ll hear any more information on Jack Thompson or other characters from Agent Carter?

God, I hope so! I usually find stuff out from fans on Twitter! I’m the last to know, generally. I would love to find out more. I don’t know what form it would take for Marvel, but it’s obviously a storyline and a character — I’m speaking of Agent Carter now, Peggy Carter — that just really resonated with people. And it seems like it’s got more juice in it, so I hope Marvel finds a way to keep it going.

On Elizabeth Henstridge’s livestream for “Out of the Past,” you mentioned something about there being issues with the train you were shooting on…

[laughs] Um, all I can say is that the train that we shot on did not smell great. And it had to do with the lavatory on board. In the very final end of the train, the very last car, there was these big doors that were opened up. So half of the crew was trying to get back down to the end of the car, and fit in this one car where there were these big windows that could open up! So yeah, I felt bad for the people who were stuck in the other cabins! 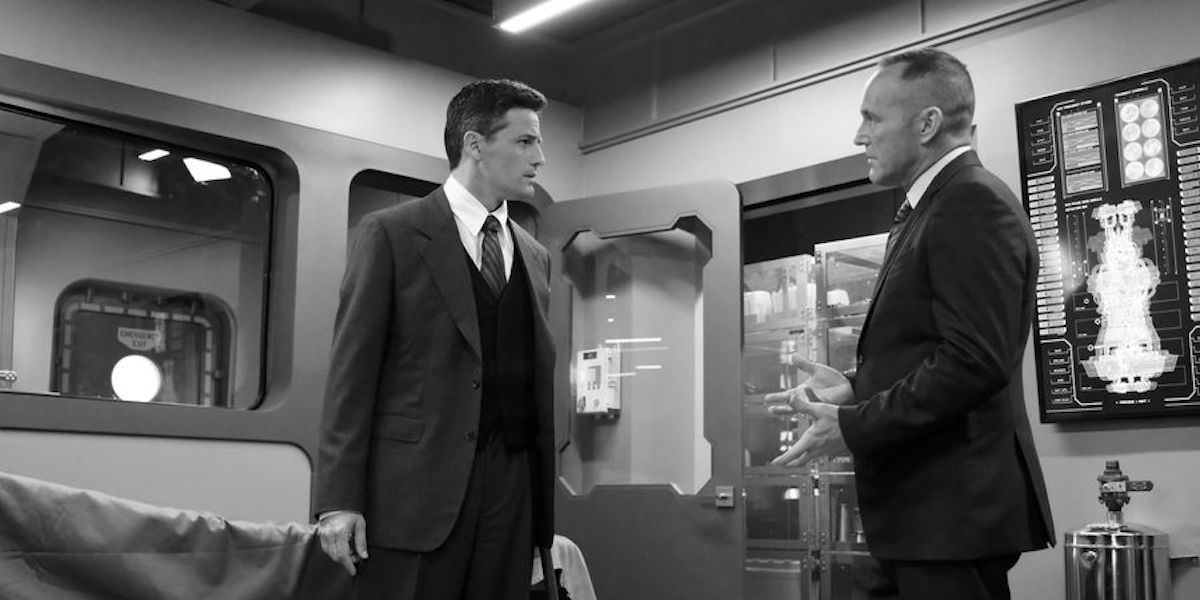 You first worked with Agents of S.H.I.E.L.D. show runners Jed Whedon and Maurissa Tancharoen on Dollhouse. What was it like to work with them again in the Marvel Universe?

You couldn’t ask for anything better than somebody who’s worked with you in the past, and knows your strengths as an actor and writes specifically with your voice in mind. Granted, to give credit to the Agent Carter writers who created the character, but [Jed and Maurissa] worked with me, they know what I’m capable of as an actor. And so, it’s unfortunately rare, but it’s this ideal situation where you pick up right where you left off. And there’s this established trust where they know you as an actor and frankly, that you’re not difficult to work with! It’s great. I mean, if I had my druthers, I’d just work with all the people I’d worked with in the past for the rest of my life. It’s wonderful, you just pick up where you left off.

There was talk of trying to, before I was on Agent Carter, they wanted to get me on S.H.I.E.L.D. as the young cop from my appearence in The Avengers. We had some talk about that, and that didn’t work out for one reason or another, I have no idea why. And then I got cast in Agent Carter, and Jed and Maurissa were bummed out, because that meant now that I couldn’t be on the show — and so they found a way! They did eventually get me on the show, and I’m very grateful.

Seven season all arcing toward getting Enver on Agents of S.H.I.E.L.D.!

Oh yeah, that was the whole plan! From the beginning they were like, how can we write a show so that we can get Enver on for a couple of episodes in the seventh season!