Celebrating the six: Hawkeye’s best moments in the MCU

As we get closer to the theatrical premiere of Avengers: Endgame, we thought it was only fitting to honor the original six by sharing our favorite moments. Let’s kick things off with Hawkeye.

Always an Avenger, never a solo character. Thus goes the ballad of Clint Barton, aka Hawkeye, at least as far as the MCU goes. It’s been a long road to Avengers: Endgame, and Hawkeye is the the character everyone tends to forget about. He’s not superstrong, a crazy, rich genius, or a Norse god, so his abilities can be overlooked from time to time. But that’s not to say he doesn’t have a bevy of awesome moments in Phase One, Two and Three.

Here are just a few of our favorite Hawkeye moments from his time in the MCU so far.

Oh, and if you’re a diehard Clint Barton fan, you’ll definitely want to check out this news from Disney+.

5. We’d like to introduce you to this badass archer dude 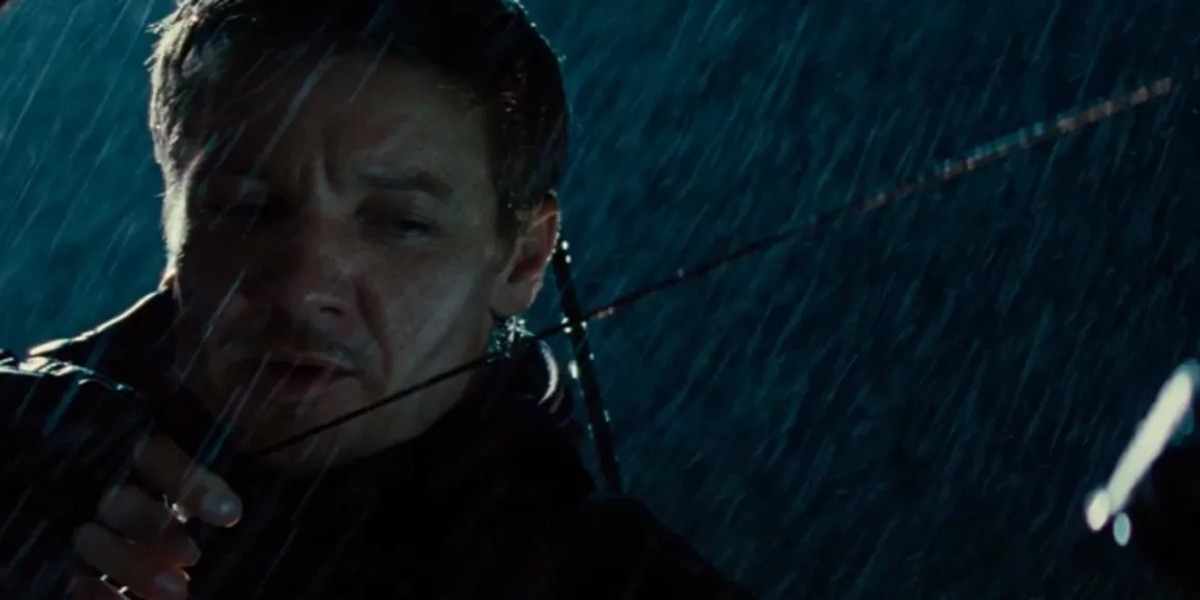 You may not remember, but our first glimpse of Hawkeye on screen was in the first Thor movie, as Coulson had him on the payroll playing protector of a mysterious artifact that fell out of the sky. We may not have seen any crazy shots like we will in later Avengers movies, but this initial scene was a great introduction to Hawkeye’s ability and dedication to the cause. Not to mention it was fun to see Thor growing on him in just a few moments from quite a distance. This is the beginning of a beautiful team-ship. 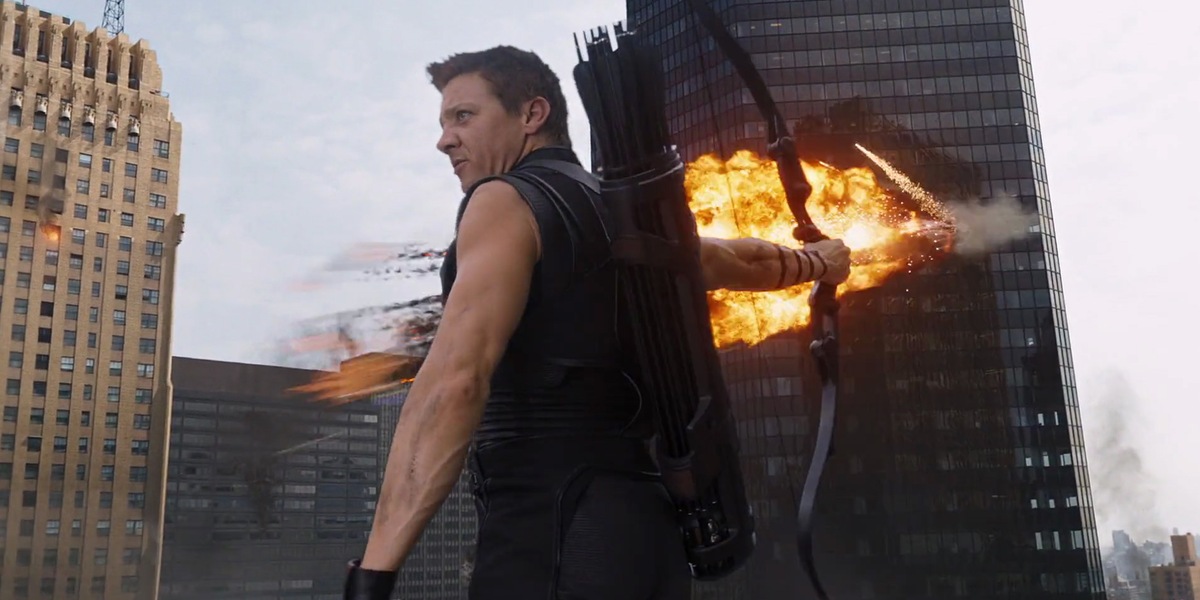 In perhaps one of his most memorable moments, Hawkeye takes point in New York when Loki rains Chitauri down upon the city. He posts up on a rooftop in the thick of the fighting and tries to help his comrades take down this extra-terrestrial threat. After having had his mind messed with for the first half of the film, it was awesome to see him fully embraced into the team for this fight.

And you can’t think about this sequence without mentioning him outsmarting the ultimate trickster. Loki thinks he kept Barton from hitting his target when he catches an arrow aimed for his head, but a second later, we learn that Hawkeye has planned for even that complication. A little explosion and BOOM! Loki is stranded in Stark tower and will soon be met by Hulk for a VERY memorable moment. 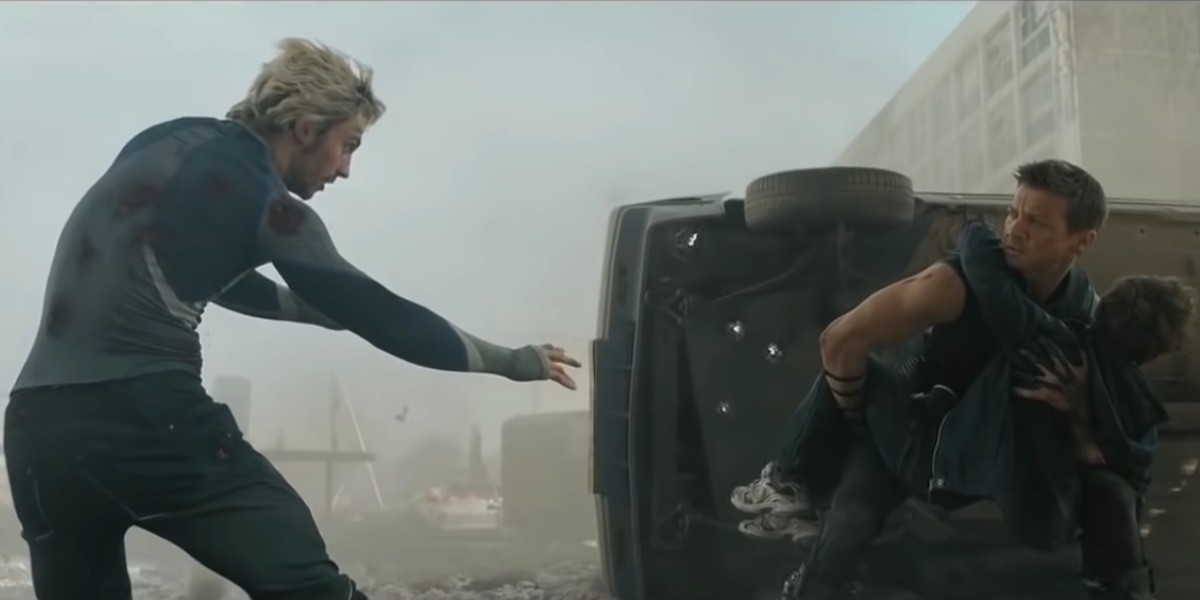 Okay, so this one isn’t really a scene per se, but more a running gag. While Avengers: Age of Ultron may not have been the crew’s finest outing, I would say that it gave us a lot of fun moments for Hawkeye. He and Wanda have a moment that we’ll get to in a moment, but him and Pietro have an ongoing thing that definitely brought some levity to a movie about a pretty crazy murderbot.

Their first interaction in the forest with Quicksilver’s “You didn’t see that coming?” sets the stage for a rivalry we definitely didn’t see coming. Hawkeye may be quick with a bow and arrow, but his accuracy is no match for someone who can run faster than a speeding arrow.

And then it becomes not-so-light. The rivalry comes to an end when Quicksilver does, in a barrage of enemy fire. Clint looks on as Quicksilver delivers his final, “You didn’t see that coming,” and Hawkeye realizes that, though he was ready to give up everything to save this kid in battle, Pietro Maximoff made the ultimate sacrifice this time, giving Clint the opportunity to make it back home to his family when all is said and done.

2. Clint and Laura take a second

The biggest surprise in Age of Ultron was Barton’s safe house. Nat had just been on the receiving end of some pretty nasty tricks courtesy of Wanda Maximoff, and the team needs a place to regroup. Cue superhero team walking into Clint and Laura Barton’s quiet little farmhouse.

It had been pretty much understood prior to this point that none of our heroes had families or lives outside their avenging. Sure, Tony has Pepper and Thor had Jane, but kids and a quiet place to call home? No way. Except for Clint Barton.

His family definitely raised the stakes because now we all knew what he was putting on the line every time he walked into battle. He believes in this team and is willing to fight alongside all their superpowers despite how vulnerable he is and even with everything he has to lose. This specific moment with his wife, Laura, hits home because we get to see how supportive she is of his work as Hawkeye, even if it does mean that he might not come home someday.

1. A mid-battle moment with Wanda

So, yeah, there have been a lot of Age of Ultron moments in this list, but since Hawkeye didn’t make an appearance in Avengers: Infinity War, we had to look back at the bigger picture for our favorite Hawkeye moments. And this one definitely reigns supreme.

Wanda has crossed over and is helping to bring down Ultron rather than fighting for him now. She is hella powerful, and the Avengers have all seen what she can do. She has a moment of genuine fear in the middle of the fight, and is in desperate need of a peptalk. Enter Clint Barton and his authentic, sarcastic flair.

He delivers my favorite Hawkeye line ever in this scene when he breaks it all down for Wanda. “The city is flying, we’re fighting an army of robots, and I have a bow and arrow. None of this makes sense.” It’s all true. It sounds ludicrous, but that’s what happens when you’re an Avenger. His speech works though, because moments after he throws himself back into the action, Wanda steps out of the darkness and proves she is a ferocious force to be reckoned with.

(Psst! If you want to watch this moment for yourself, you can check it out here.)

BONUS! Hawkeye likes to sing about all the superpowers he does have

From his cat’s instagram to his seventh place fantasy league performance, Hawkeye has a lot to offer, guys. What a great sport Jeremy Renner is to give us extra special moments like this one. You are as super as they are, Hawkeye. Getting free guac at Chipotle is certainly a VERY valuable superpower.

What do you think are the best Hawkeye moments?