Agents of S.H.I.E.L.D. 6×02, titled “Window of Opportunity,” grapples with team stress and loss on both sides of the Earth-bound conflict, while similar values proved useful up in space.

Sarge and his crew get a handle on the delights of Earth while robbing a gas station. Later, tensions bubble between Sarge and Pax over the death of Tinker during his botched crossing. Apparently, a life spent moving from world to world in an invisible hauler truck can wear on the nerves. So can an unexpected lack of “PEGs,” which Team Sarge need to complete their nefarious mission.

At S.H.I.E.L.D., Dr. Benson attempts to solve the mystery of Tinker and Coulson’s evil doppelgänger, information that Mack withholds from the rest of the team. Elena comforts Keller on the loss of Agent Fox, and decides to reinitiate their relationship. Benson uses DNA from the gas station to declare Sarge an exact match with Coulson, distressing May. The scientist and agent clash, the tension only calmed by Mack explaining how much pain the memory of Coulson causes May. Benson resolves to help. 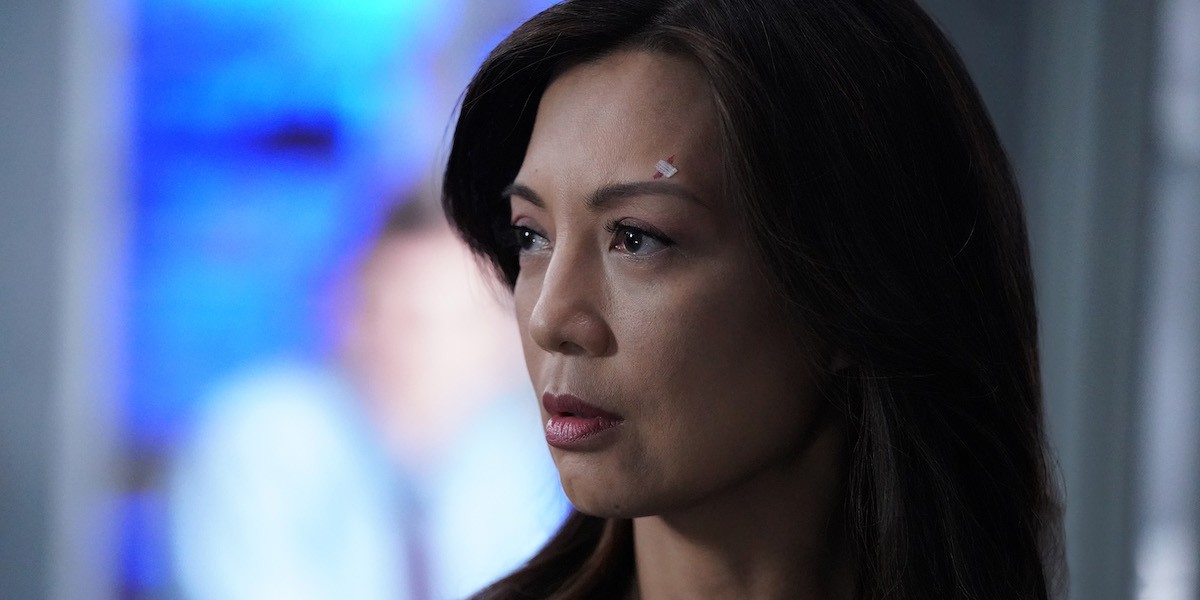 After pressing Sarge on his “past life,” Pax and Sarge are nearly discovered by a junkyard security guard. Team Sarge then holds up a jewelry store in search of PEGs. Snowflake, who seems to believe in aggressively helping others into reincarnation through violence, kills the security guards. May and the S.H.I.E.L.D. team interrupt the heist, but find the culprits locked in a vault that they have connected to their truck with space-collapsing technology. Sarge’s crew discovers the gems — cheap crystals — that they are looking for, and May attacks on the truck side of things. She frees the hostage and gets another horrified look at Sarge, calling him “Coulson,” before she is pushed through the portal and into the vault.

Jaco notes that Sarge “froze” upon hearing the name Coulson; Sarge brushes it off but says the name rings a bell.

Back in the lab, Benson unlocks a camera from Tinker, which reveals Sarge and his team destroying a world in Thanos-like swirls of dust.

Meanwhile, Fitz works as an engineer on a space-freighter carrying some kind of disgusting alien mollusk. He and Enoch are soon exposed as human (and human-ish) and Fitz accidentally gets the rest of the engineers sentenced to death by airlock after proving his own exponential value to the bloodthirsty captain. Needing to be able to “look Jemma in the eye again,” Fitz refuses to allow this to happen, and prepares to sacrifice himself with the engineers. Enoch, who had objected to the plan, saves the day by reversing the airlock and killing the captain and his minions.

Fitz and Enoch decide to take the crew away from the planet they are nearing, where the remaining crew will be executed for mutiny. Instead, they head to the planet of Kitson, with Fitz accepting the delay in his return to cryostasis.

As they jump away, the Zephyr jumps into atmosphere. Jemma holds Fitz’s wedding ring, promising Daisy that he is here. “I can feel it,” she says.

While an energetic installment of Agents of S.H.I.E.L.D., “Window of Opportunity” begins to expose the challenges presented by orchestrating two stories on two very different planes.

Whether its the Earth-bound adventures of the S.H.I.E.L.D. crew and Team Sarge, or the even weirder events unfolding in space, Agents of S.H.I.E.L.D. 6×02 feels slightly out-of-sync with itself. The deliberately mysterious identity of Sarge remains compelling, but his crew’s adventures are convoluted; it’s hard to decide how invested to feel with both their means and motives so strongly obscured. 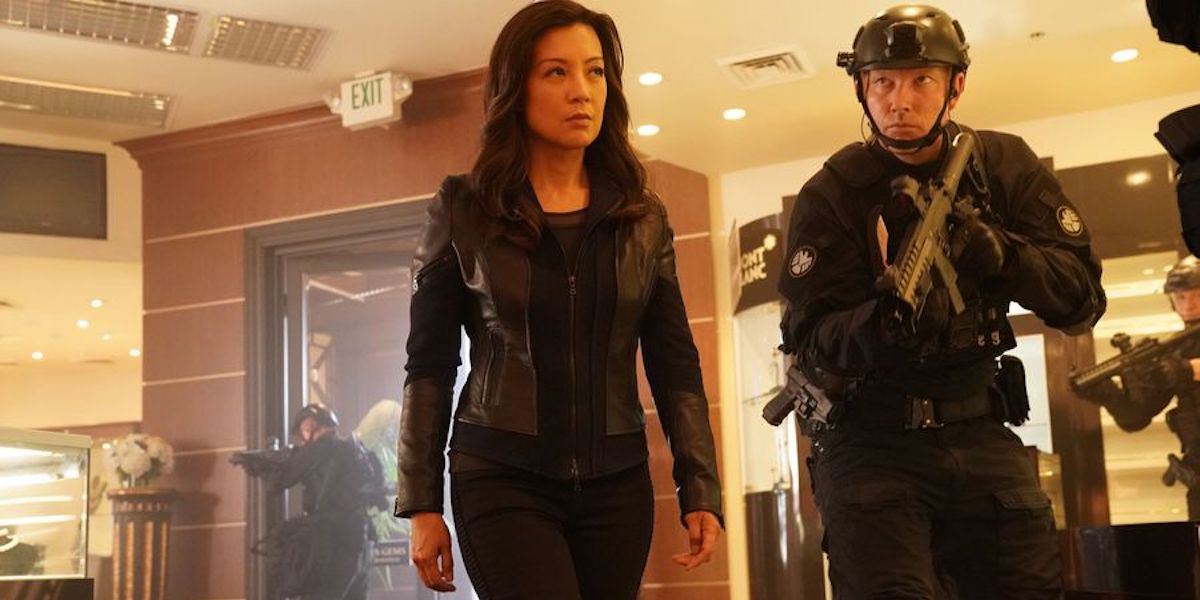 This, in turn, dents the impact of May’s emotional storyline, as she is caught in a confused loop of solving a physically impossible problem. (Literally!) There is certainly no lack of power brimming in the potential fallout, and May’s brief conflict with Benson acts as a strong highlight for her internal pain. But for the time being, aesthetic strangeness seems to be taking precedent over emotional clarity.

Fitz’s plot line is more straightforward, in spite of the even weirder setting. (Space mollusks! Honestly!) But this too falls a bit short on the full range of its power. It’s all well and good for Fitz to be willing to sacrifice himself, but with such an evident moral outline, the conclusion seems more than foregone.

There are, of course, grounding moments. Between the loss of Fox on the S.H.I.E.L.D. team and Tinker from Sarge’s crew, both conflicting groups are grappling with loss and tension with leadership. Like the episode, the gears of both teams are not exactly in perfect sync, but the building atmosphere of discontentment works well. There are ironic lines to be drawn between Mack and Sarge in their confidence and leadership tactics. And it’s also a solid parallel with May’s pain, and Fitz and Simmons’ mutual loss — which Agents of S.H.I.E.L.D. 6×02 highlights in deliberately teasing fashion in the tag. 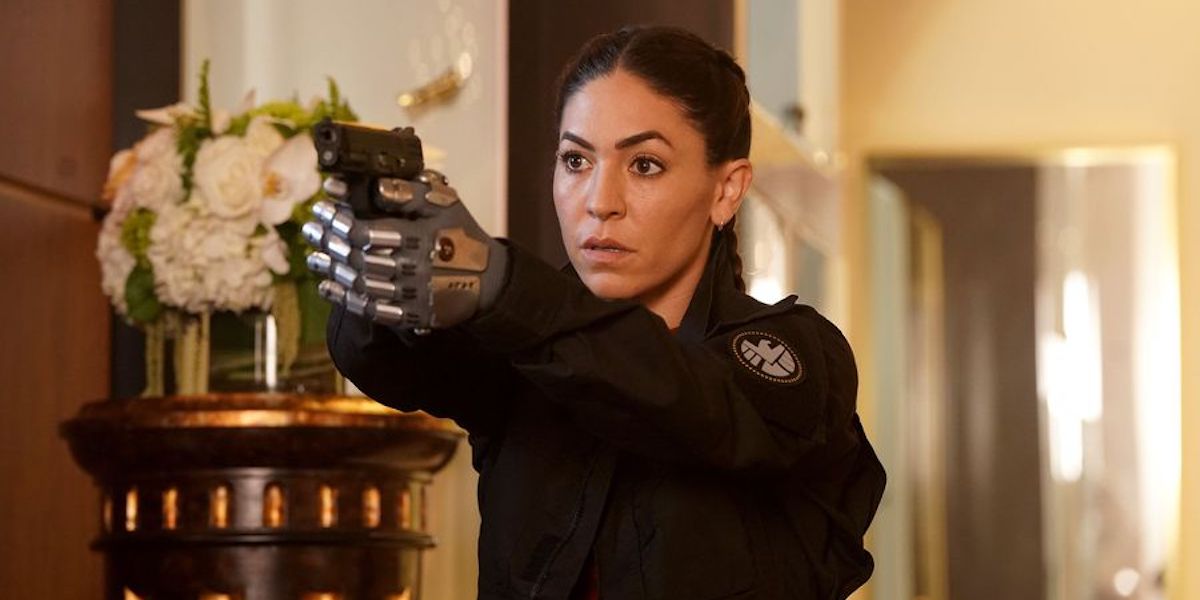 Overall, “Window of Opportunity” is an episode unevenly weighted more toward ideas than emotions, struggling therefore to find an even stride. But with the lines of mystery laid, hopefully Agents of S.H.I.E.L.D. season 6 can fall into pace soon enough, allowing its powerful latent feelings to shine.

Joel Stoffer’s Sentient Chronicom Enoch is a really delightful return from season 5. Sent backwards along his arc of loyalty and caring for Fitz, Enoch is still more directed by logic than heart, but it’s easy to see the skin of humanity forming over that synthetic plastic. He also serves as a strong counterpoint for Fitz’s emotional quest, and his chemistry with Iain DeCaestecker is always pleasing.

And back on Earth, Elena and Keller are appreciably grounded. Life in S.H.I.E.L.D. is never exactly normal, but the simple beats of a new relationship provide a welcome pulse of normalcy in a sci-fi-forward season.

Sarge’s crew continues to land with something of a thud, particularly the gregariously psychopathic Snowflake. There is depth hinted at, at least, in Jaco (Sarge’s reference to the big man’s “home atmosphere” is intriguing) but Snowflake is not much more than a murderous manic pixie at this point.

Sarge: I can tell a lot about a world by its currency. What have we got?
Pax: Paper, with faces on it.
Sarge: Great, it’s one of those.

Benson: I’m thinking I should revisit the file on those life-model decoys. Which really shouldn’t be a thing, by the way.
Mack: No argument here.

Enoch: Sidians are notoriously xenophobic.
Fitz: Are they really?? Well, that might have been a nice detail to include when you taught me the language!

Mack: You know what it’s like to have a memory that’s too painful to revisit?
Benson: Of course.
Mack: Well, May’s pain is running around killing people.

Fitz: It wasn’t so hard to predict. There’s a part of me that knows how uncompromising hateful men can be.

Snowflake: I’m picking up on a lot of unhealthy anger from you!