We use cookies to ensure that we give you the best experience on Hypable. If you continue to visit us, we will assume that you are happy with it.
11:30 am EDT, May 16, 2019

Don’t expect FitzSimmons to have an easy path in ‘Agents of S.H.I.E.L.D.’ season 6

Agents of S.H.I.E.L.D. seemed to have played its most ruthless romantic card at the conclusion of season 5 — but fans may not have seen anything yet.

After so many years of defying the odds (and injury and mental illness and killer robots and space-rock kidnapping), death finally came between Fitz and Simmons, when Fitz was killed in the season finale. But thanks to a quirk of the timeline, Simmons set off to find an earlier version of Fitz who was floating through space, waiting to join his love in the future.

“As weird as that seems, you will get that weird!” he promises of Agents of S.H.I.E.L.D. season 6. “That weirdness will be seen. You will see some weirdness.”

If the season premiere was any indication, Simmons and Fitz aren’t particularly close to a heartwarming reunion. He’s stuck working as a space-mechanic somewhere; she’s turned desperate over the long year spent searching for her missing husband.

Related: What the heck is going on with the Agents of S.H.I.E.L.D. timeline in season 6?

At least they’re both in space. But a repeating theme for FitzSimmons has been the challenge of crossing distance — not of time and space, but rather the heart and the mind.

“I think they’ve become less human in this year,” says Elizabeth Henstridge, who plays Simmons. “They’ve both had such a singular drive to find each other that they have sacrificed other parts of their humanity to be able to do that. So… they’ll have to re-learn to feel, to have empathy a bit more again once they finally get what they want.”

Agents of S.H.I.E.L.D. season 6, episode 2, “Window of Opportunity,” will shed light on where exactly Fitz stands in relation to his own humanity. His partner in these trials is the Sentient Chronicom Enoch, which may be an asset or a hinderance, depending on how you look at it.

Simmons, meanwhile, has Daisy — her friend and leader of their mission — to reckon with. But actress Chloe Bennet thinks that that relationship will be helpful in both Simmons’ mission and her emotional journey. 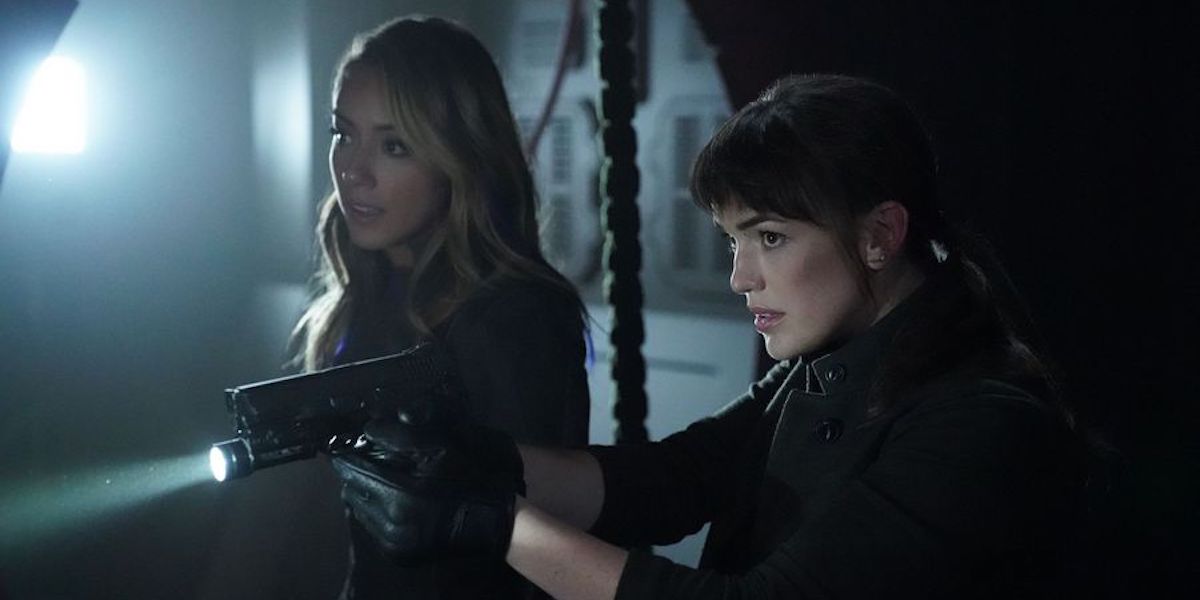 “I secretly think Daisy, and I played this a little bit, I kind of wasn’t being as aggressive with stopping her,” Bennet says of Simmons’ rogue destination programming in the premiere. “It’s [Daisy’s] responsibility to take care of Piper and Davis because she’s leading this team. But you’re also like, ‘Okay girl. I’m gonna look this way, and you go that way.'”

“Because I feel like if Daisy wanted to really stop her, she would have,” Bennet muses. “It’s Fitz and Simmons, you know? The number one drive for her this season is to get them back together.”

Henstridge also emphasizes the importance of Daisy and Simmons’ friendship in, noting the difficult choices that Simmons necessarily puts on her friend with her actions.

“[Simmons] is reckless at the moment, and that’s dangerous. And Daisy, as the leader of the team, knows that… she knows that all I’m thinking about is Fitz. I’m not even thinking about my own safety, and that’s a terrifying position for Daisy to be in,” Henstridge says. “It definitely causes damage and her actions have repercussions in terms of trust and friendships. She does have some making up to do at some point.”

Clearly, it looks like Agents of S.H.I.E.L.D. season 6 will continue to put Fitz and Simmons (and Daisy) through their paces. For Jed Whedon’s part, he’s looking forward to the marathon.

“The thing with FitzSimmons is, they are beloved characters. They are to us, not just for the audience. They have a special place in our hearts,” he says. “And so we like to put them through terrible, terrible things!”

“You know, everybody’s rooting for them but it’s less fun to root for the team that’s winning. And so we tend to put obstacles in their way.”