It's our first time seeing the beast.

As Universal Orlando finishes building The Wizarding World of Harry Potter’s latest attraction, the park is slowly but surely unveiling exciting new looks at the experience!

Update 3 (May 9, 2019): Universal has unveiled their “most life-like animated figure ever” for Hagrid’s Magical Creatures Motorbike Adventure — it’s a canon-accurate 7-foot tall Rubeus Hagrid. The animatronic has 24 different body movements and facial expressions, created in part by using “a digital scan of Robbie Coltrane’s mouth.”

Notably, actor Robbie Coltrane was brought in to record dialogue for the new Hagrid animatronic (and presumably the rest of the ride). Check him out below. It looks like Hagrid will be next to the Blast-Ended Skrewt (see below), because Hagrid looks like he’s just faced some fire. 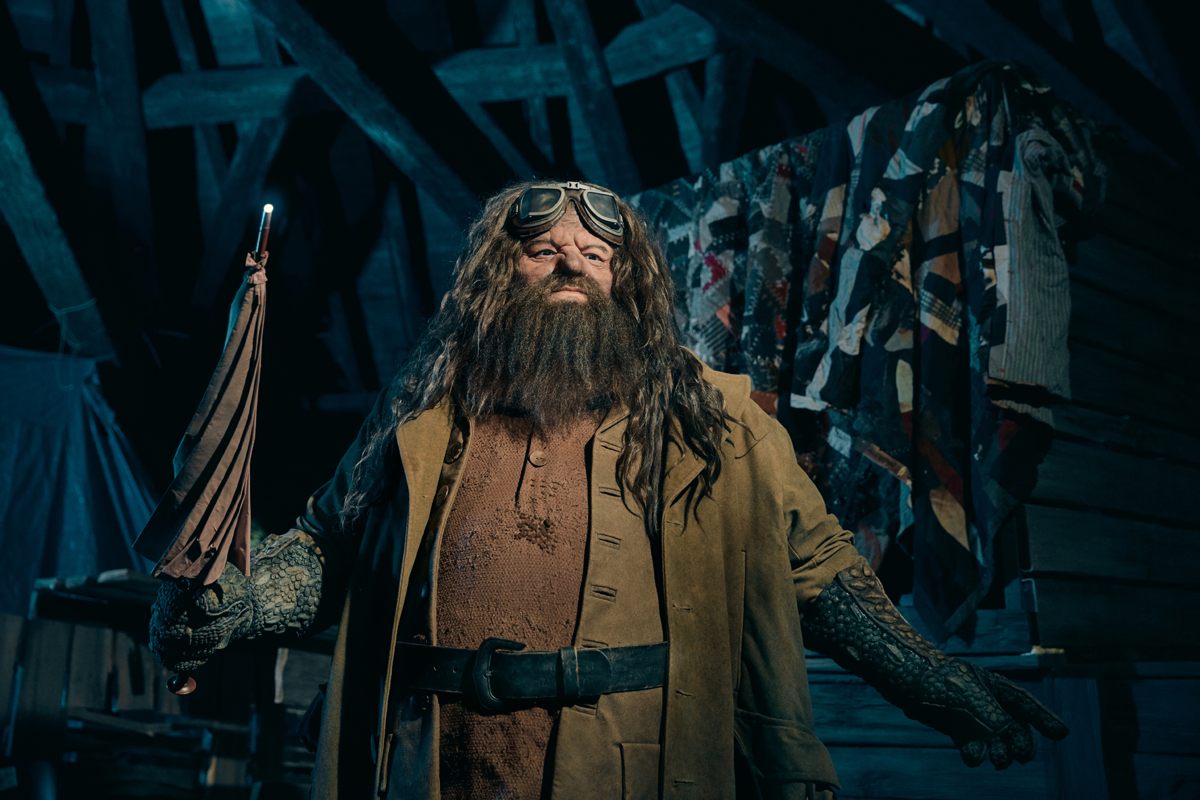 “Hagrid is such an iconic character and an integral part of the Harry Potter franchise, so we were excited to develop a truly innovative and authentic animated figure to bring him to life for this experience,” said Thierry Coup, Senior Vice President of Universal Creative. “We worked tirelessly to make sure Hagrid’s full essence was captured with the utmost attention to detail for our guests to feel completely immersed in this all-new adventure.”

Update 2 (April 19, 2019): Universal Orlando has spent each day this week revealing five creatures that riders will encounter on Hagrid’s Magical Creatures Motorbike Adventure. And they saved the best for last: On Friday they revealed that the Blast-Ended Skrewt will be a part of the attraction. This is notable because the creature was in the books but never made it into the movies: 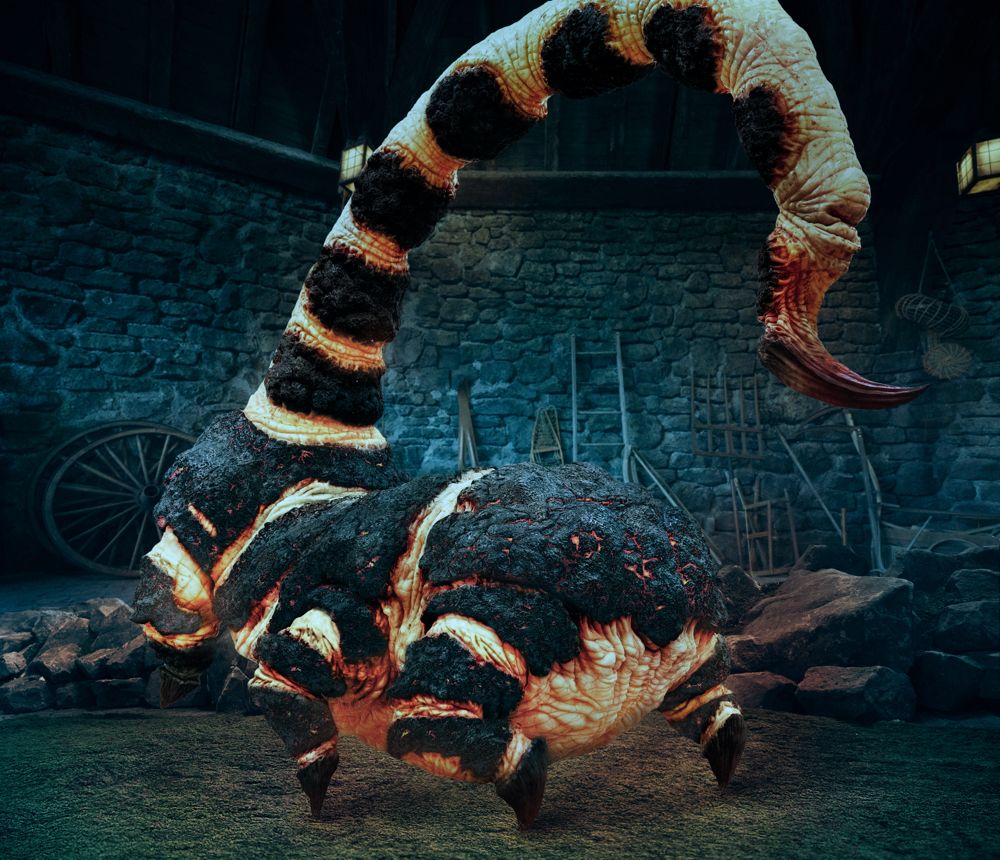 Universal says their Blast-Ended Skrewt “will be one of the most life-like animated figures Universal Orlando has ever created.” The animal is eight feet long with a ten-foot tail, and creates fire as well as “a very powerful and signature odor.”

Other creatures in the ride include: 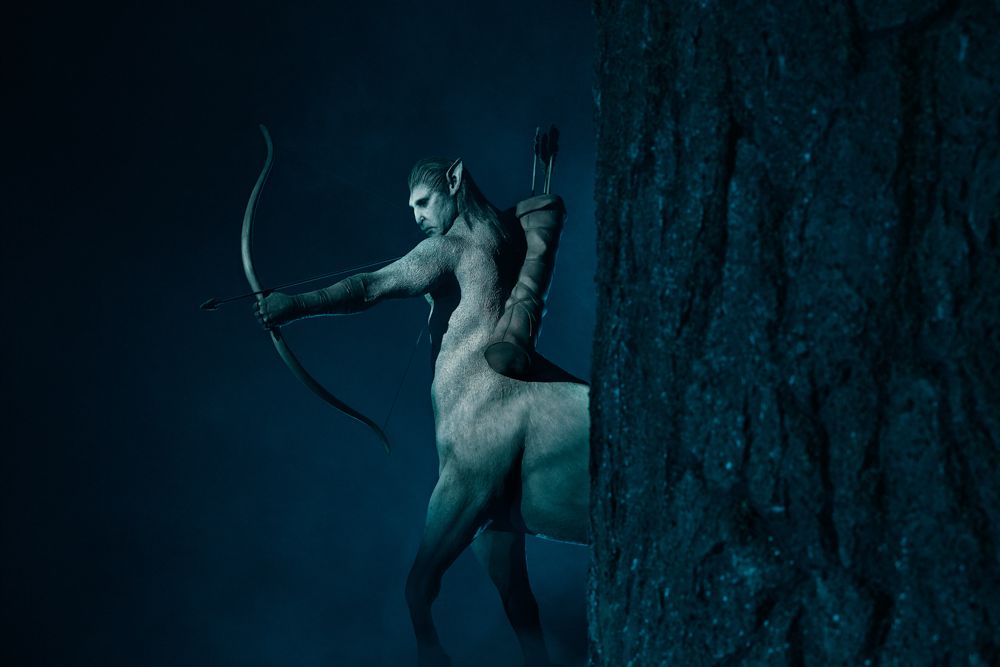 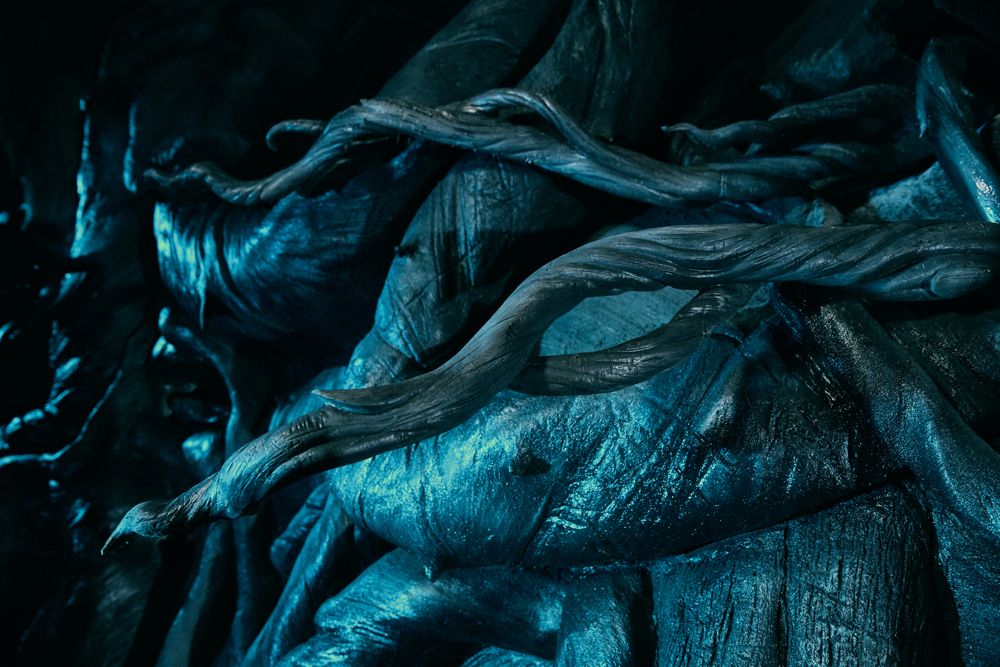 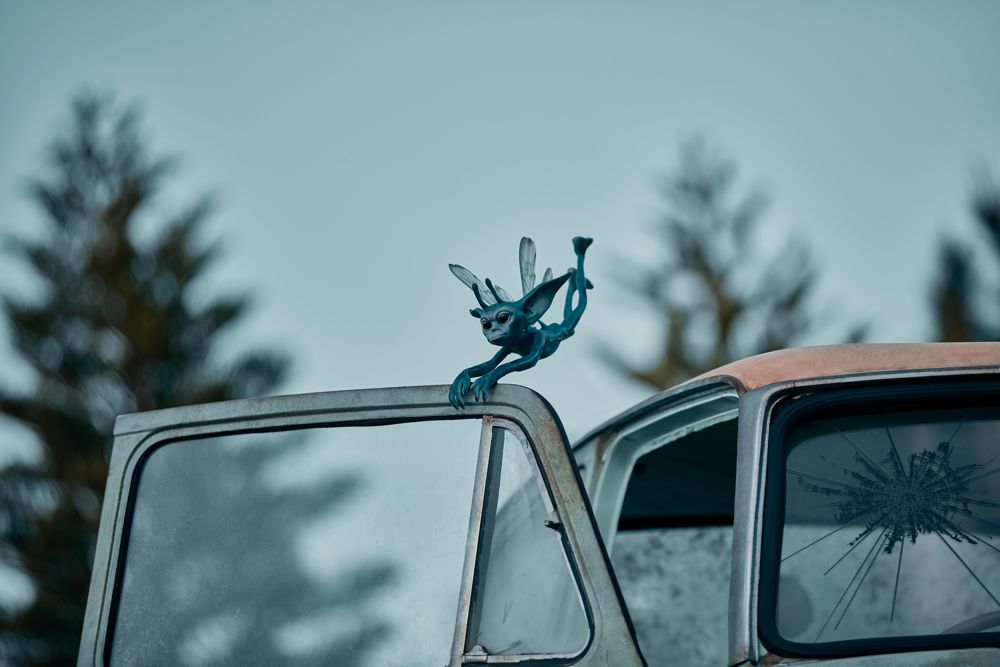 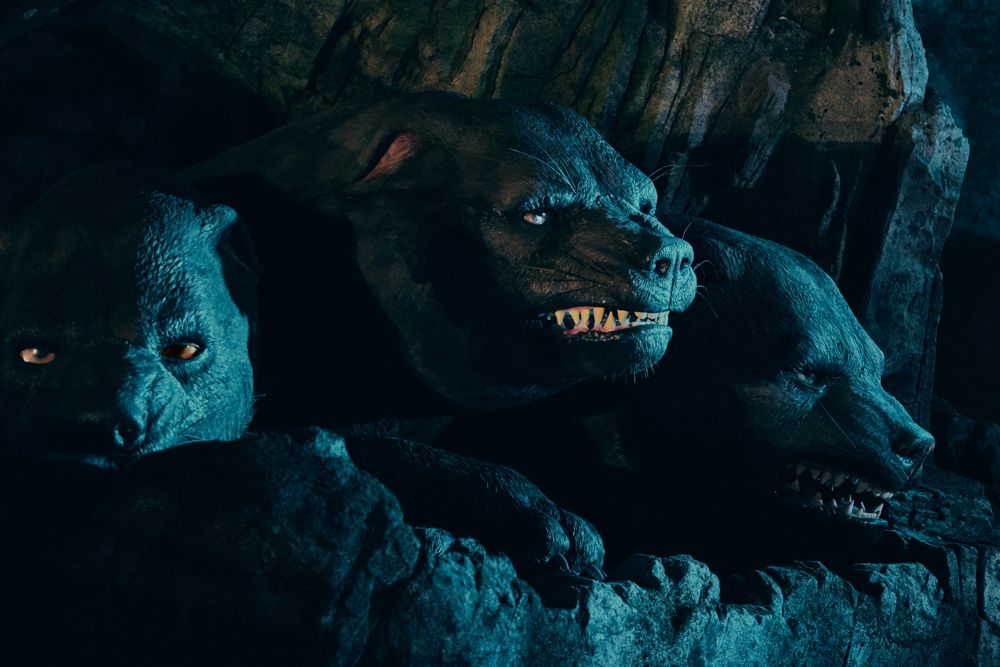 We’re sure Universal has some other surprises in store as well.

The theme park says Hagrid’s Magical Creatures Motorbike Adventure “will combine a new level of storytelling and innovative coaster technology with rich environments and sets – including an actual forest with more than 1,200 live trees. It will also give guests the unique opportunity to join Hagrid – one of the most beloved characters in the Harry Potter films – on a journey to one of the most mysterious places in the wizarding world – the Forbidden Forest. With Hagrid as their guide, guests will fly deep into the Forbidden Forest and brave the mysteries and thrills beyond the grounds of Hogwarts castle on a groundbreaking coaster experience unlike any other.”

“It all begins when guests (starting at 48” tall) join Hagrid’s Care of Magical Creatures class and board magical motorbikes specially designed to make them feel the freedom of flight. Guests will either ride the motorcycle or board the adjacent sidecar as they embark on a journey that will bring them closer to some of the wizarding world’s rarest magical creatures. ”

Things in the forest “don’t go as planned,” Universal says:

New concept art appears in the video above (see below). Can you spot Fluffy? 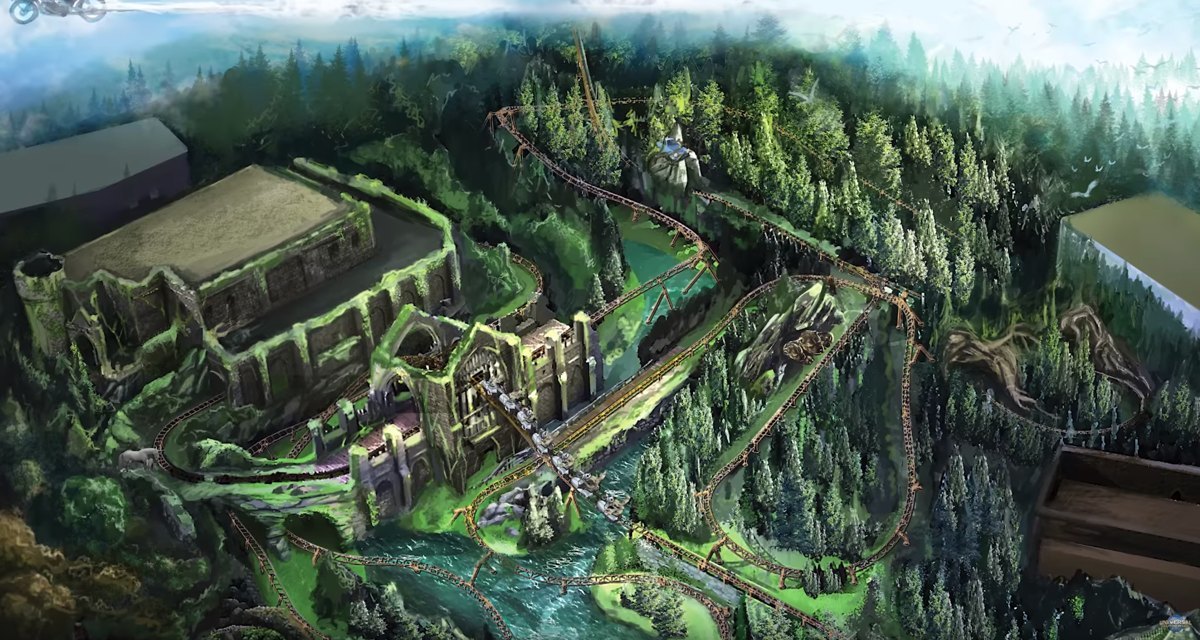 Described as “the most highly-themed coaster yet,” Universal says “guests will fly with Hagrid on a thrilling roller coaster ride that plunges into the path of some of the wizarding world’s rarest magical creatures.”

A new photo depicts Hagrid sitting at the front of the vehicle. Robbie Coltrane is presumably working with Universal on recording dialogue for this ride: The park promises that more information will be revealed in March. We can’t wait!

A poster that was previously released depicts a dense forest and a coaster sitting beside Hogwarts Castle. Three Cornish Pixies, introduced during Harry Potter and the Chamber of Secrets, and a castle-like structure: The image appears to confirm rumors that the ride will be set in the Forbidden Forest. I walked by the construction site in August and can tell you that the amount of land this ride takes up is massive. I expect that this’ll be an amazing ride.

The ride replaces Dragon Challenge, a Triwizard Tournament-themed coaster that was a re-theme of a coaster built before Wizarding World existed.