These Feathered Flames by Alexandra Overy is a queer #ownvoices fantasy re-imagining of the Russian folktale The Firebird.

But this story is so much more than that, too. Do you want Sansa/Arya sister vibes? What about a f/f enemies-to-lovers romance? Some serious Hufflepuff and Slytherin action? BEARS!?

If you answered yes to any or probably all of these questions, then These Feathered Flames is the book for you. Check out the cover and an excerpt from chapter 1 below. 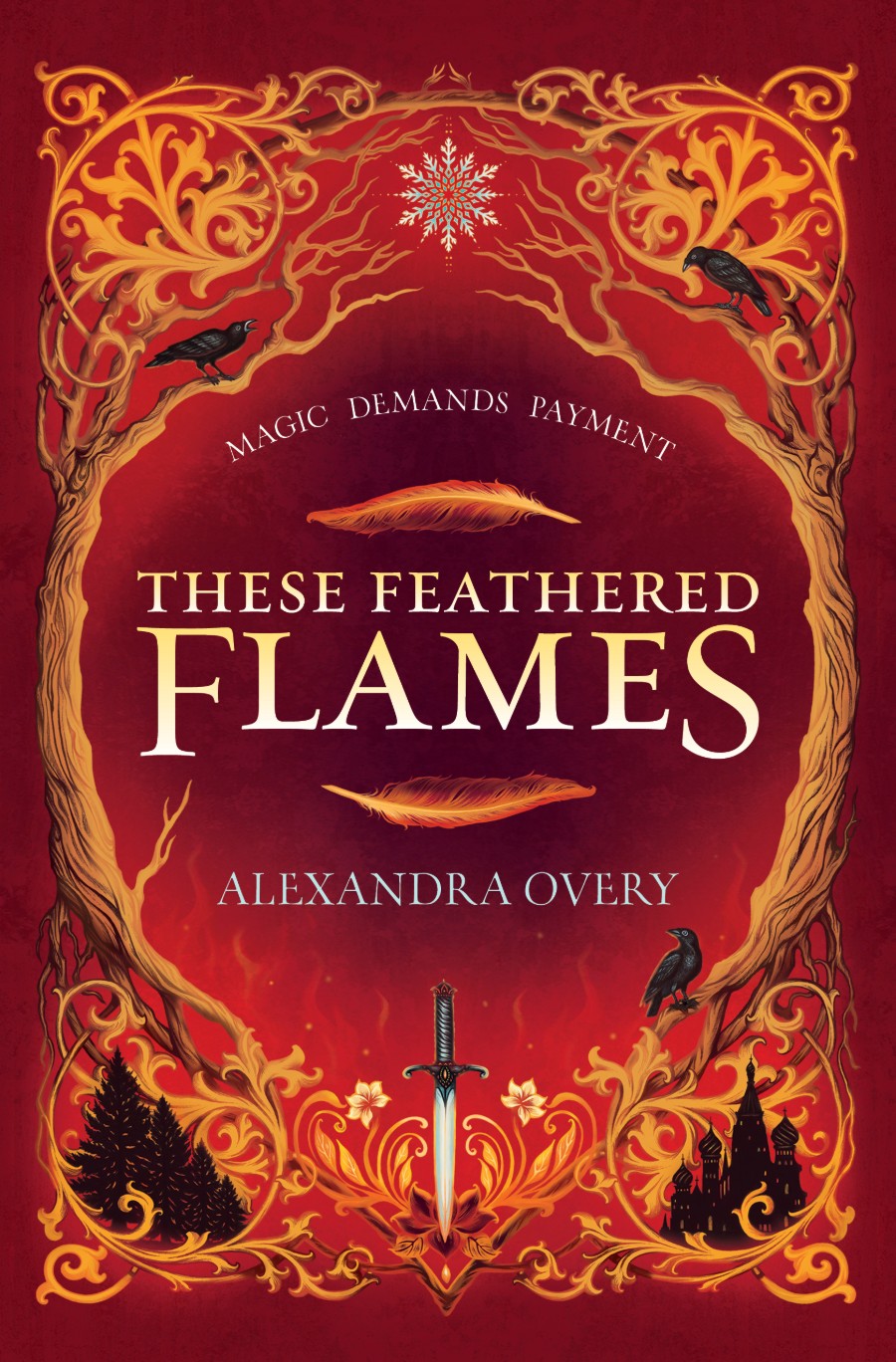 The paddock could have been beautiful, Asya supposed. But the cold apprehension burning in her stomach overshadowed it, darkening the flowers to poisonous thorns and muting the colors like fog. It was always like this. Ever since the first time Tarya had taken her on a hunt. Once she was left without a task to complete—a distraction—Asya couldn’t pretend to forget what came next. She’d hoped it would get better, but she still couldn’t shake the lingering fear.

She shifted her feet, trying to ignore the erratic rhythm of her heart. She hated waiting. Each frantic beat stretching out into an eternity.

She just wanted this to be over.

After all, her sister had always been the brave one.

But that was why Asya was here. Why she had to follow this path, no matter how she wavered. She owed it to her sister. They were the two sides of a coin, and if Asya failed, then her sister would too.

Tarya’s words—the words Asya had to live by—pounded through her. This is our duty. Not a question of right or wrong, but balance.

Her aunt stepped forward. She moved silently, slipping like a shadow untethered from its owner, from the gnarled trees and out into the overgrown paddock beyond. She didn’t speak—she rarely did when she felt a Calling—but Asya knew she was meant to follow.

Asya took a shaky breath, touching one finger to the wooden icon around her neck. An unspoken prayer. She could do this.

Far less quietly, she followed Tarya into the uneven grass, wincing at the snapping twigs beneath her boots.

The paddock led to a small cottage, surrounded by more soft crocuses. Their purple seeped out from the house like a bruise. The building’s thatched roof had clearly been recently repaired, and the gray stone was all but consumed by creeping moss. The stench of magic grew with each step Asya took. Wateroses lay scattered on the ground, interspersed with dried rosemary sprigs. The too-sweet scent, cut through with the burn of magic, made her stomach turn.

Tarya stopped by the wooden door. Marks of various saints had been daubed across it in stark black paint, uneven and still wet. Acts of desperation. They felt out of place in the idyllic scene. The sight sent a prickle of unease through Asya’s gut.

“Your weapon,” Tarya prompted, her voice low as the rustle of grass behind them.

Asya’s fingers jumped to the curved bronze shashka at her waist. A careless mistake. She should have drawn the short blade long before. She couldn’t let the apprehension clawing at the edge of her mind overwhelm her. Not this time.

Asya unsheathed the weapon, the bronze glinting in the fading light, and forced her hand to steady.

Her aunt gave her a long look, one that said she knew just how Asya’s heart roiled beneath the surface. But Tarya just nodded, turning back to the freshly marked door. Sparks already danced behind her eyes—deep red and burnished gold flames swallowing her usually pale irises. It transformed her from ethereal into something powerful.

Asya swallowed, pushing that thought away. Her aunt wasn’t a monster.

Tarya reached out and pressed her palm to the wood. Heat rolled from her in a great wave, making Asya’s eyes water. A low splintering noise fractured the air, followed by the snap of the metal bolt. The door swung open. All that was left of the painted sigils was a scorched handprint. Asya’s mouth went dry. She couldn’t help but feel that breaking the saints’ signs was violating some ancient covenant.

But Tarya just stepped inside. Asya tightened her grip on the blade, trying to shake off the sense of foreboding nipping at her heels, and followed.

The cottage was comprised of a single, small room. Heavy fabric hung over the windows, leaving them half in shadow. As Asya’s eyes adjusted, she took in the shapes of furniture—all overturned or smashed against the cracked walls. Clothes were strewn across the floor in a whirl, along with a few shattered plates and even a broken viola, its strings snapped and useless. A statue of Saint Meshnik lay on its side, their head several paces from their armored body. The room looked like it had been ransacked, perhaps set upon by thieves.

Or like someone wanted it to seem that way.

Tarya turned slowly, her sparking eyes taking in the room. Then her gaze fixed on a spot to her left and flames reared across her irises again. Asya couldn’t see anything. But she knew her aunt was not really looking at the wall, she was feeling—reaching for those intangible threads that bound the world and using them to narrow in on her prey.

Asya waited, her breath caught in her chest.

Tarya moved in a flash, as though Vetviya herself had looked down and granted her secret passage through the In-Between. One moment beside Asya, the next in front of the wall. Flames sputtered from her wrist, licking along her forearms as golden and bright as sunlight. She put her hands on the wall, and the flames eagerly reached out to devour.

They burned away what must have been a false panel, revealing a tight crevice behind. Three faces stared out, eyes wide and afraid. Two children, a boy and a girl, clutching onto a man with ash-white hair, now covered in a faint sheen of soot.

“Oryaze,” he breathed, terror rising on his face like waves over a hapless ship. Firebird.

Bile burned in Asya’s throat. She took a halting step back, staring at the huddled family. It’s the man, she told herself. It had to be. The thought murmured through her, a desperate prayer to any god or saint who might be listening.

The man leaped forward, spreading his arms as though hiding the children from view might protect them. As though anything he did would make a difference. “I won’t let you touch her!” he cried, grabbing one of the broken chair legs and brandishing it like a sword.

Asya clenched her teeth, a sharp jab of pity shooting through her. It would be no use. Nothing would.

The flames coiled lazily around Tarya’s wrists as she watched the man with a detached curiosity. “The price must be paid.” 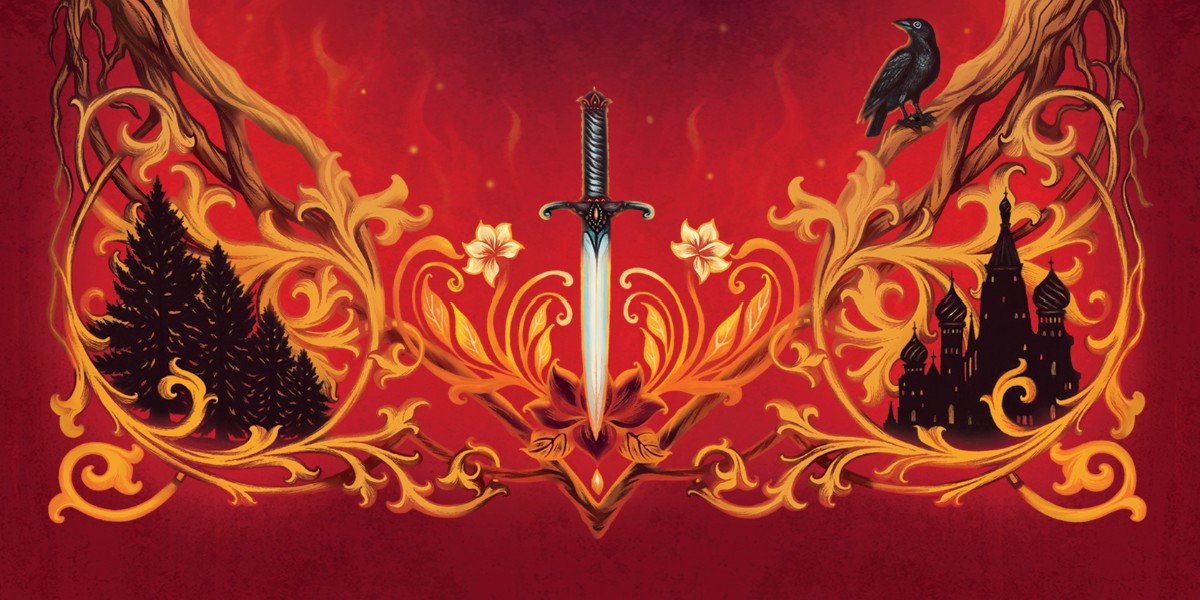 Two sisters. Separated by duty. One certain truth: magic always comes with a price. In the land of Tóurin, when twin heirs are born, one is raised to rule and the other becomes the next Firebird, a creature to ensure magic remains balanced.

While Izaveta remained at court, learning the lies and deception needed to survive, Asya was taken away to train with her aunt, the mysterious and deadly Firebird. But before Asya’s training is completed, the ancient power suddenly blooms inside her, which can mean only one thing: the queen is dead, and a new ruler must be crowned. Asya returns to court for her sister’s coronation, only to feel the stirring of her first calling as the Firebird.

Now, she must navigate the unfamiliar territory of the royal courts, where friend and foe are often one and the same, to hunt down the person who used the forbidden magic. But not all is as it seems, for magic is dying in Tóurin, political schemes are in motion, and the two sisters will soon find how much their years apart have changed them both.

These Feathered Flames will hit store shelves in April 20, 2021. Add it to your Goodreads list.