‘The Perfectionists’ is suffering because of Freeform’s promotion problem

There’s a difference between promoting an episode and spoiling it. Over the last year, Freeform has completely changed their marketing strategies for the worst, and it’s jeopardizing the ratings and quality of their TV shows.

Freeform is most commonly known for its popular drama TV shows like Pretty Little Liars and The Fosters, both of which currently have spin-offs on the network. They also have more fun, light-hearted shows like Grown-ish and The Bold Type, but I worry for the future of all these series if they continue to reveal too many things about the episodes in advance and ruin the viewing experience for people. Some shows are more negatively affected by this promotion problem than others, but the problem remains the same.

Pretty Little Liars: The Perfectionists is a murder mystery. Take away the mystery and you have no show. The foundation of this entire series is built on secrets, riddles, and theories, and if nothing is kept confidential, there’s no point in watching.

Half of the fun of watching Pretty Little Liars: The Perfectionists is all of the jaw-dropping moments, and the other half is theorizing what happens next and discussing those theories with other people who watch the show. But you can’t do that if every last detail of the upcoming episodes are being plastered online.

This isn’t to say that a few teases here and there aren’t welcomed. A couple of episode stills and one (tastefully done) episode promo is enough to get people excited without ruining the mystery. Pretty Little Liars: The Perfectionists is only three episodes in and two of those episodes had their final scene spoiled in the promo.

The first and central murder of the show was broadcast on social media weeks before the premiere, when it was supposed to be the jaw-dropping cliffhanger. The cliffhanger for episode 3 was also released in a promo, as well as the identity of someone who followed the murder victim on the night of the crime. There’s not a single shocking moment left by premiere day. Where is the excitement in that?

Let’s keep digging. Who killed Nolan?
Pretty Little Liars: The Perfectionists is all new next Wednesday at 8/7c on @FreeformTV. #PLLThePerfectionists pic.twitter.com/nOzDqqbvZq

The pilot episode was by far the worst. There were a combination of over 5 promos, 4 clips of the episode, and the entire opening scene released early. Not to mention they showed the main murder that the whole season is revolved around. Freeform isn’t promoting their TV series, they’re just spoiling them.

There’s also the matter of episode descriptions. Although these are arguably less of an issue, if you go onto Freeform’s website, anyone can easily read summaries of episodes that are weeks, if not months, out, and effectively leak what’s to come. With all of the promos, descriptions, pictures, and cast interviews, it isn’t hard to piece everything together.

Fans miss when things were so secret that the cast would panic if they thought they accidentally said too much. Fans miss the alarmed look on everyone’s faces when they weren’t sure if their cast-mate had just revealed some important secret. For example, one of the things they would’ve never revealed before was what happened to Alex and Mary Drake (one of the biggest questions fans of the original show had going into The Perfectionists).

But Freeform’s promotion tactics have declined so greatly that Sasha Pieterse, who plays Alison Dilaurentis-Fields, was able to get away with spoiling the answer to that in an interview before the pilot episode aired, which Freeform’s Twitter account than proceeded to blast on social media (as opposed to trying to keep it quiet).

Q: what is your favourite line from the caracter you play ? #PLLThePerfectionists
– @tinispieterse
A: pic.twitter.com/Aw5KEsajAT

Although The Perfectionists is the series most greatly impacted by this issue, it isn’t the only one. Season 2 of The Bold Type was also a victim of this pattern. After the first official promo was released, it wasn’t long before various scenes, stills, and interviews gave away entire plot lines. Shows like The Bold Type aren’t quite as affected because it isn’t a mystery and there isn’t as much to reveal, but it’s still ruining the quality of the story.

Break-ups, job losses, and monumental moments were all so heavily hinted at that you didn’t even need to watch to know exactly what happened. Nothing feels new, surprising, or even worth watching when you already know 90% of what’s to come. That isn’t what people want, nor is it benefitting Freeform in any way. So why do they continue to do it?

It’s difficult to grasp what the intent is behind giving away so much. If it’s for social media buzz, are likes and retweets really worth compromising both ratings and value? And if the intention is to draw in new viewers with suspenseful and shocking moments, it isn’t working. All the network is doing by marketing their shows this way is risking the audience they already have. Their shows are never going to get renewed if people don’t even have to tune in to see the drama unfold.

Like, why bother watching Pretty Little Liars live tonight when I already saw half the episode on Twitter last week? What made the original show last so long was everyone’s ability to keep a secret. The mystery could’ve never been drawn out seven seasons if pictures and clips of every other scene were being released on social media. Aside from the fact that the plot is getting spoiled, it’s just no fun to turn on a brand new episode when you feel like you’ve already seen it before. By the time the episode rolls around, there are no surprises left.

are all of those sneak peeks from the pilot? I feel like I’ve seen the whole thing by now pic.twitter.com/3DF49DMuBE

It’s hard enough to keep things under wraps when enough things accidentally get leaked as is. People who have behind-the-scenes access, including extras and crew members, have been known to leak information in the past. The last thing we need is the marketing and social media teams assisting in that process.

This issue is more prominent now than it ever was in the past, however, it seems to have first began when ABC Family made the shift to Freeform back in 2016. Granted it was never this bad, but there were still some important plot points they let slip.

For example, this episode still of Mona Vanderwaal holding flowers in a church was released early, and anyone who watches Pretty Little Liars knows it completely gave away Charlotte Dilaurentis’ killer. (Charlotte was found dead outside of a church, holding those flowers). This mistake could’ve been easily avoided, but the network continues to be its own worst enemy by making careless decisions.

It’s as if the people running the social media accounts are completely unaware of what they should and shouldn’t reveal. They need to go back to their old editing and promotional styles. They were short and sweet and captured people’s attention without completely spoiling what happens next. And please, for the love of god, just log off of Twitter. 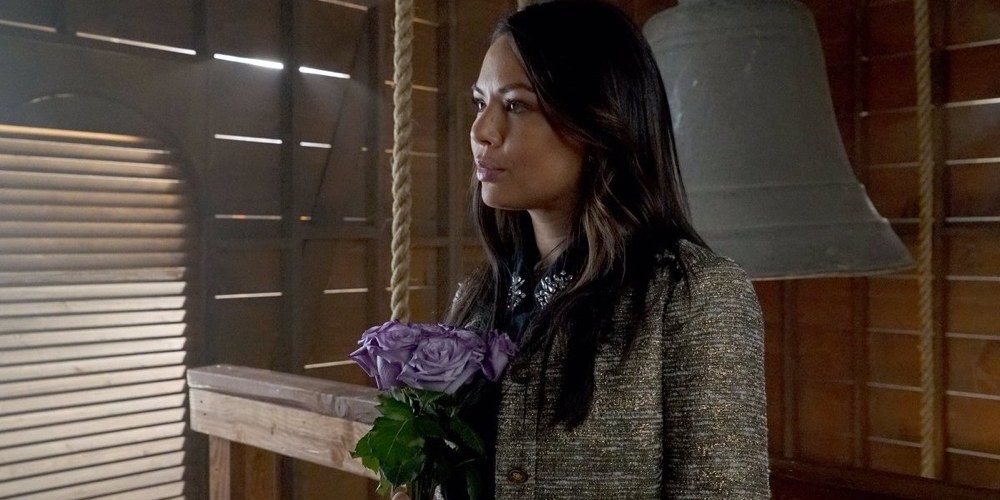 Over the course of Freeform’s existence a variety of their marketing strategies have gotten exponentially worse. Since making the switch from ABC Family, they went from having 20-episode seasons that aired once in the summer and once in the winter, to 10-episode seasons that are only on for two to three months out of the year. Freeform could greatly benefit by going back to their old premiere schedule rather than taking the approach of a streaming service when they aren’t one.

Shorter seasons don’t work on cable TV, especially when commercials take up 20 minutes of the episode. There’s hardly enough time to develop any characters, and storylines end up being rushed because they don’t have enough time to address it properly.

This is especially true when it comes to drama-driven TV series like The Perfectionists. At the very least, if Freeform is going to continue having short seasons, they can’t continue to wait an entire year before airing the next season. If your show is only on the air for three months out of the year, it probably isn’t going to perform well.

People forget about it, and with so many different streaming services available now there’s plenty of other things they can watch instead. Freeform isn’t a streaming service, so why are they taking the same approach as Netflix and Hulu?

.@imarleneking you might wanna talk with the the pr/marketing team. they’re releasing the whole episode in stills/promos, they keep shading other shows which is really unprofessional. they’re making the promos look cheap and unprofessional & they aren’t promoting it at all

Speaking of which, instead of posting new episodes of The Perfectionists or any other show via Twitter, they should be working on getting them posted on Netflix and making them available internationally. The Perfectionists’ creator, I. Marlene King, alluded to that happening in the near future, at least for her show, so fingers crossed.

But until then, with the combination of international viewers not being able to watch live, the matter of “over-promoting” episodes, and their unfavorable premiere schedule, ratings are going to suffer. Freeform’s shows have the potential to continue go on for years and be very thrilling to watch, but only if things change.