‘The Oracle Code’ book review: An empowering story of recovery

Marieke Nijkamp and Manuel Preitano’s The Oracle Code is both a thrilling mystery tale and an evocative story of recovery.

I’d also go as far as to say that The Oracle Code is one of — if not the — best books that DC’s branch of graphic novels for young adults has put out, which is high praise considering the incredible stories and artwork we’ve gotten from this line of graphic novels so far.

It shows off what DC’s line of graphic novels for young adults can be at their very best — telling an engaging, emotional story that captures the spirit of the character without being tied down by years of comic book canon, all while giving us some truly gorgeous art that adds to the fullness of the story.

Though many of DC’s graphic novels for young adults have built new stories around its characters’ long-established origin stories,The Oracle Code — like Mariko Tamaki’s Harley Quinn: Breaking Glass — redefines Barbara Gordon’s origin, bypassing her time as Batgirl completely and instead focusing on the core of who she is as Oracle.

Building a world in which Barbara Gordon was never the Batgirl may seem almost sacrilegious, but Marieke Nijkamp is such a talented writer who also understands Babs so well that she crafts a story that not only taps into the core of who Barbara Gordon is as a person and a hero, it also — dare I say — improves on some of her most well-known storylines.

What Nijkamp and Preitano give us with The Oracle Code is not only a damn good mystery story with stunning art — they also give us a story about what it means to be a hero.

And, more than this, they give us a story about recovering from trauma and discovering that while trauma may change us, that change doesn’t mean that we are broken. 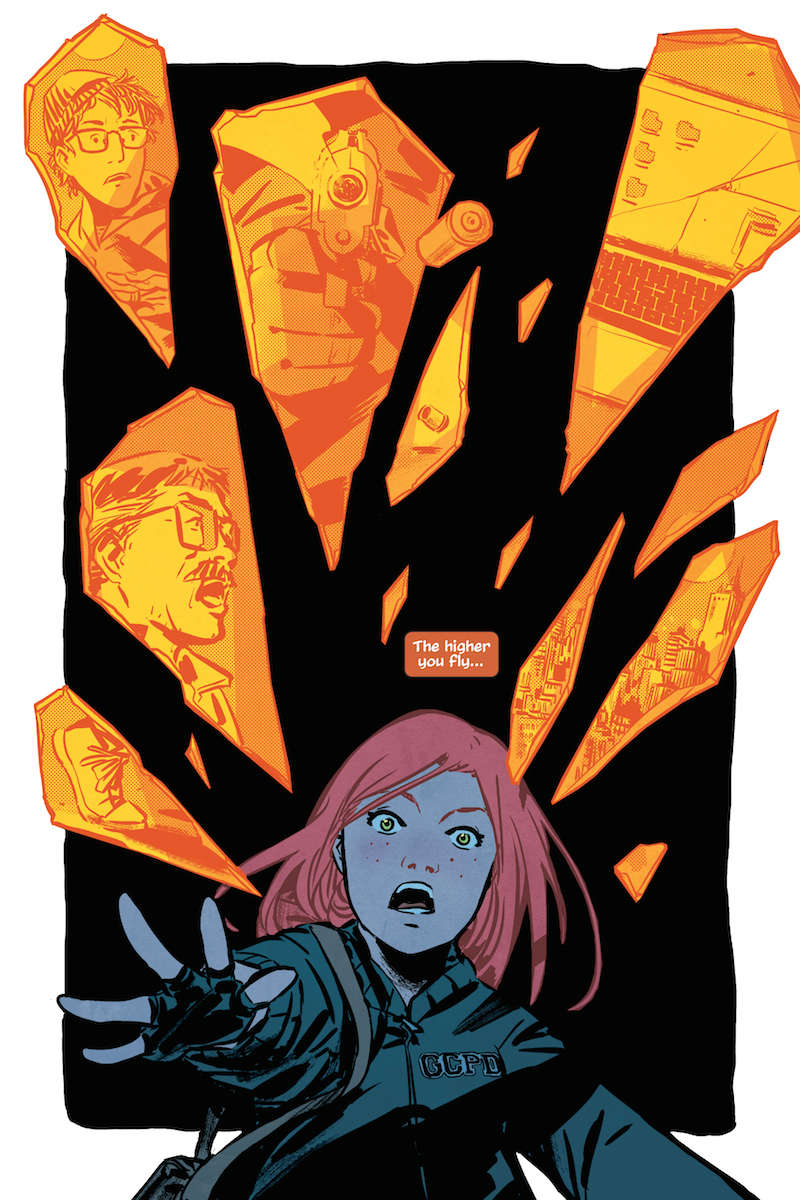 Though Barbara Gordon is probably best known by general audiences as Batgirl, I’ve always liked her best — and found her most interesting — as Oracle.

Though I enjoyed her time kicking ass as a costumed superhero, using her tech expertise and hacking superskills to take down crime while also sassing all the members of the Batfamily made her one of my favorite heroes in Gotham City.

Oracle being a badass hero who was also disabled and who was also vital to safety of Gotham City gave us one of the few examples of disabled representation in comic books. It also showcased that heroism doesn’t have to — and shouldn’t — only look like the standard souped-up superhero leaping from rooftop to rooftop with their cape flowing behind them.

However, as much as I love Oracle as a character, it’s hard to deny that the path that Barbara Gordon was given in getting there was both terrible and offensive in a variety of ways.

Her paralysis at the hands of The Joker as a ploy to get at both her father, Commissioner Gordon, and Batman meant that her origin story as Oracle was defined by the men in life, a mere pawn in someone else’s twisted game.

In The Oracle Code, author Marieke Nijkamp reimagines the origin story of Barbara Gordon’s Oracle completely, and in doing so, redefines Barbara’s path without ever straying from her innate heroism and divorcing her from the core of who she is.

Rather than painting her as first a sidekick, then as the collateral damage in someone else’s war, Nijkamp and Preitano give Barbara more agency in her life and in her choices. 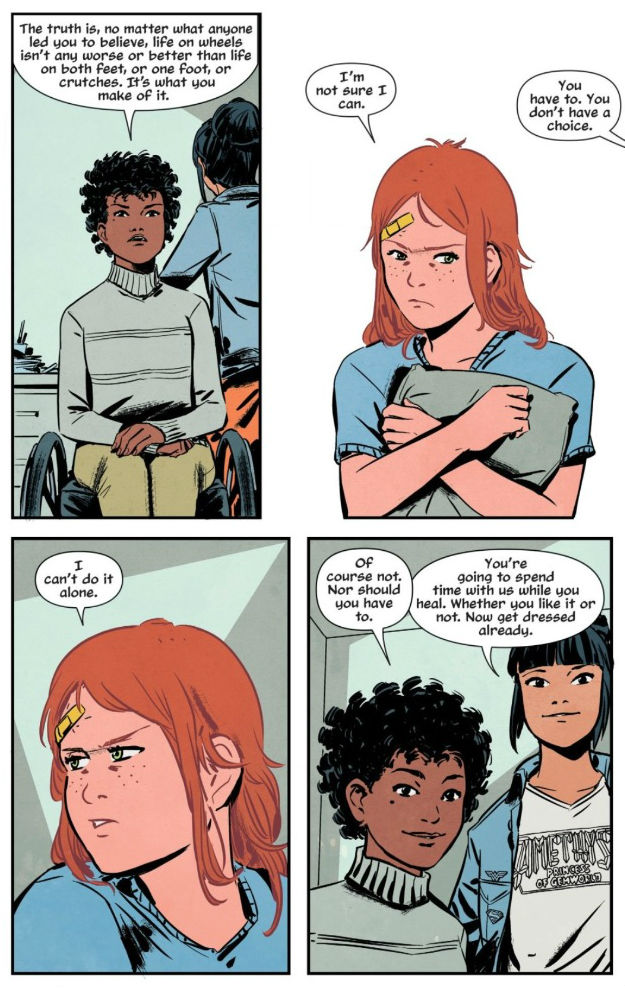 Rather than setting up the story with Barbara Gordon as Batgirl, The Oracle Code does away with that part of the mythos entirely, instead beginning with Barbara as a master teenaged hacker named Oracle.

Here, Barbara Gordon was never second fiddle to another big name superhero, but instead is a talented young woman who tries to help someone but ended up in the wrong place at the wrong time.

Having Barbara shot while attempting to help the victim of an armed robbery still highlights the same drive towards helping others that Batgirl had, and still shows Barbara suffering a traumatic injury that largely paralyzes her from waist down, but it does so without making her a footnote in someone else’s story.

Six months after her injury, Barbara is taken to live at the Arkham Center for Independence, a state-of-the-art rehabilitation program that is meant for badly injured teens in need of long-term care and rehabilitation.

While there, Barbara meets other teens in her situation who attempt to bring her out of her shell, while also completing therapies with an unsmiling psychologist and a jovial young physical therapist.

However, the most interesting person she meets is Jena, a young girl who visits her late at night and tells her haunting ghost stories to help lull her to sleep.

Over the course of the book, we see Barbara not only work to come to terms with her new normal, but bond with the people around her. However, when Jena disappears, Barbara embarks on a quest to not only solve the mysteries behind the walls of the crumbling estate, but to piece together her own new identity. 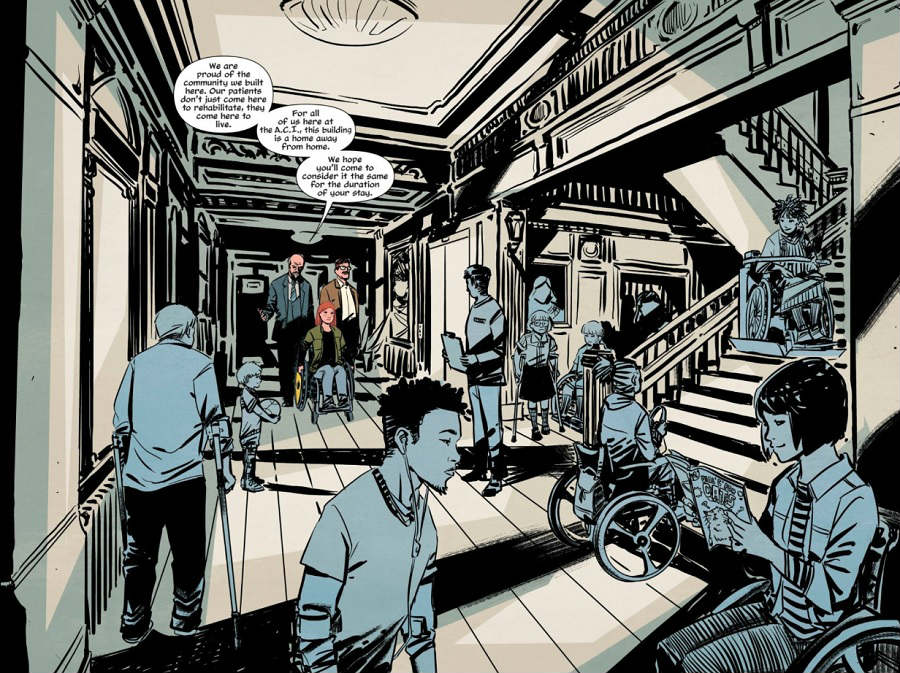 First off, on a pure storytelling level, The Oracle Code is absolutely fantastic. Nijkamp crafts a fascinating mystery story that unfolds slowly but never stalls, one that kept me guessing and turning pages in anticipation of what might happen next.

Though it’s common — and totally understandable — for prose authors to get a bit lost in the weeds when transitioning to graphic novels, Marieke Nijkamp has crafted a graphic novel like an old pro.

The story is perfectly paced, tightly plotted and confidently controlled. You get the impression that every word is necessary — direct and to the point without ever feelings brusque or rushed.

There’s nothing excess here — even the interludes of Jena’s ghost stories show themselves to be wholly necessary to the story as a whole — and I was incredibly impressed with the way that Marieke Nijkamp wove the stories of The Oracle Code into one cohesive narrative.

I’d also be remiss not to mention the art, which is just stunning and does precisely what you want every artist-author team to do on a graphic novel — work together to complement the story without overwhelming it.

Manuel Preitano creates a lush world that draws you deeply into the story without ever distracting you. The way he changes his art style to fit the differing ghost stories that Jena tells speaks to his talent and understanding of the story and I honestly wouldn’t have minded just an entire story of Jena’s ghosts stories with Manuel Preitano’s art. 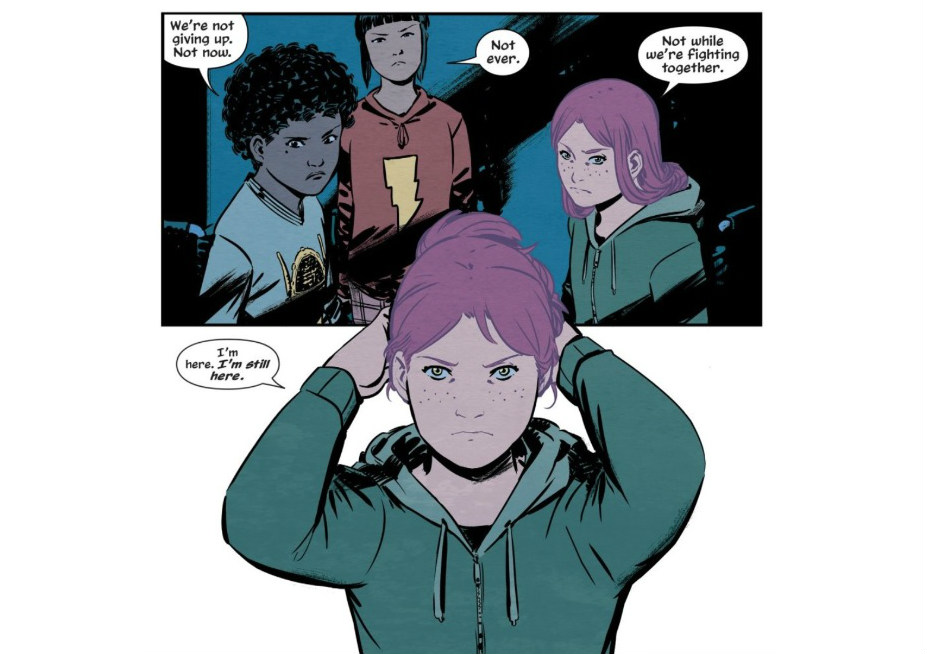 However, as great as the storytelling in The Oracle Code is, it’s Marieke Nijkamp’s understanding of character that puts this graphic novel at the top of the list for me.

We meet Barbara Gordon at a crossroads at her life, at a time that could easily be characterized as a low point. We watch as she works through not only physical trauma, but the psychological trauma of what happened to her.

Marieke Nijkamp, who identifies as queer, non-binary, and disabled, shows themself as the perfect author to pen this reimagined story of Barbara Gordon, tackling concepts of identity, disability and recovery with clarity, sensitivity and relevance.

We follow Barbara as she struggles with the idea that she’s lost — to the world, to herself — and as she emerges on the other side of that dark valley and recognizes that, as she says in her own words, she is who she’s always been, even if she’s not quite sure who she’ll become in the future.

The journey that Barbara takes throughout the story is so clearly grounded in the real challenges that newly disabled individuals must face — even from those who love them or want to help them — and I’m infinitely glad that this book exists not only for fans of Barbara Gordon, but for young adults who are going through the same experiences.

The Oracle Code is an incredibly raw and powerful story, one that shows that being disabled is not the same thing as being lost or being broken, and that to be disabled doesn’t mean you need to be fixed.

It’s a beautiful and emotional story with equally gorgeous artwork, one that I wholeheartedly recommend to any fan of Barbara Gordon, graphic novels or great storytelling. Believe me, this is one you don’t want to miss out on. 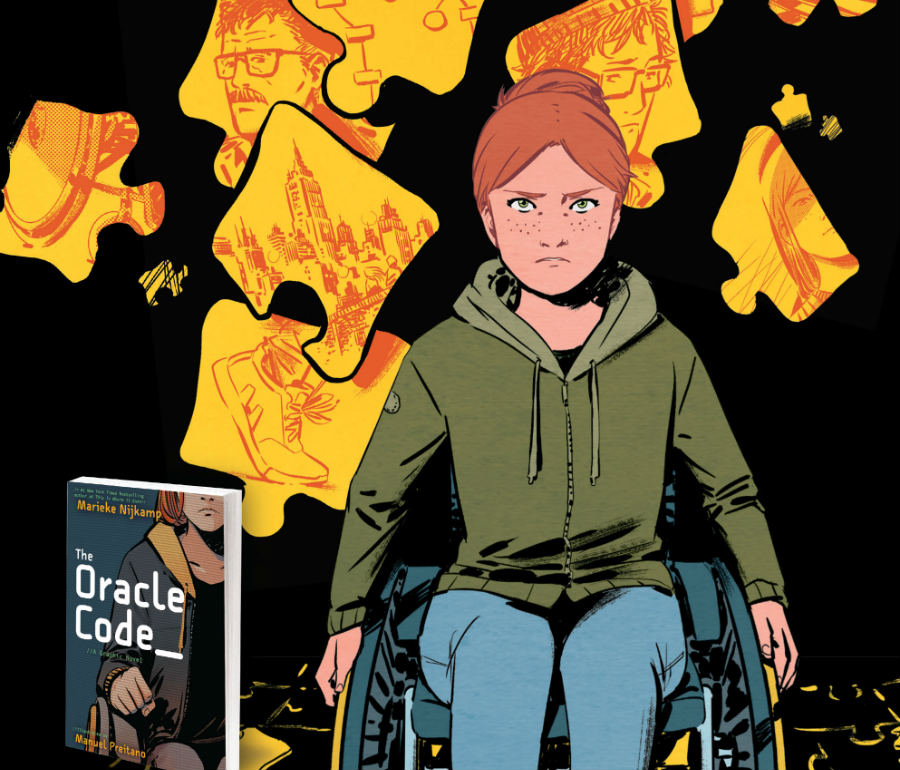 The Oracle Code is available now. Be sure to order your copy from DC Comics, Barnes & Noble, Amazon, or your local independent bookstore. Also, don’t forget to add it to your Goodreads “to read” shelf!