The Magnolia Sword combines wuxia martial-arts dramas and the centuries-old ballad of Mulan, and we’ve got an exclusive look at the cover and an excerpt!

The cover for The Magnolia Sword brings together a soft pink background with the strength of our heroine in profile. It was created by Christina Chung, a Taiwanese-Hong Kong-American artist who lives in Brooklyn. You can visit her at christina-chung.com. 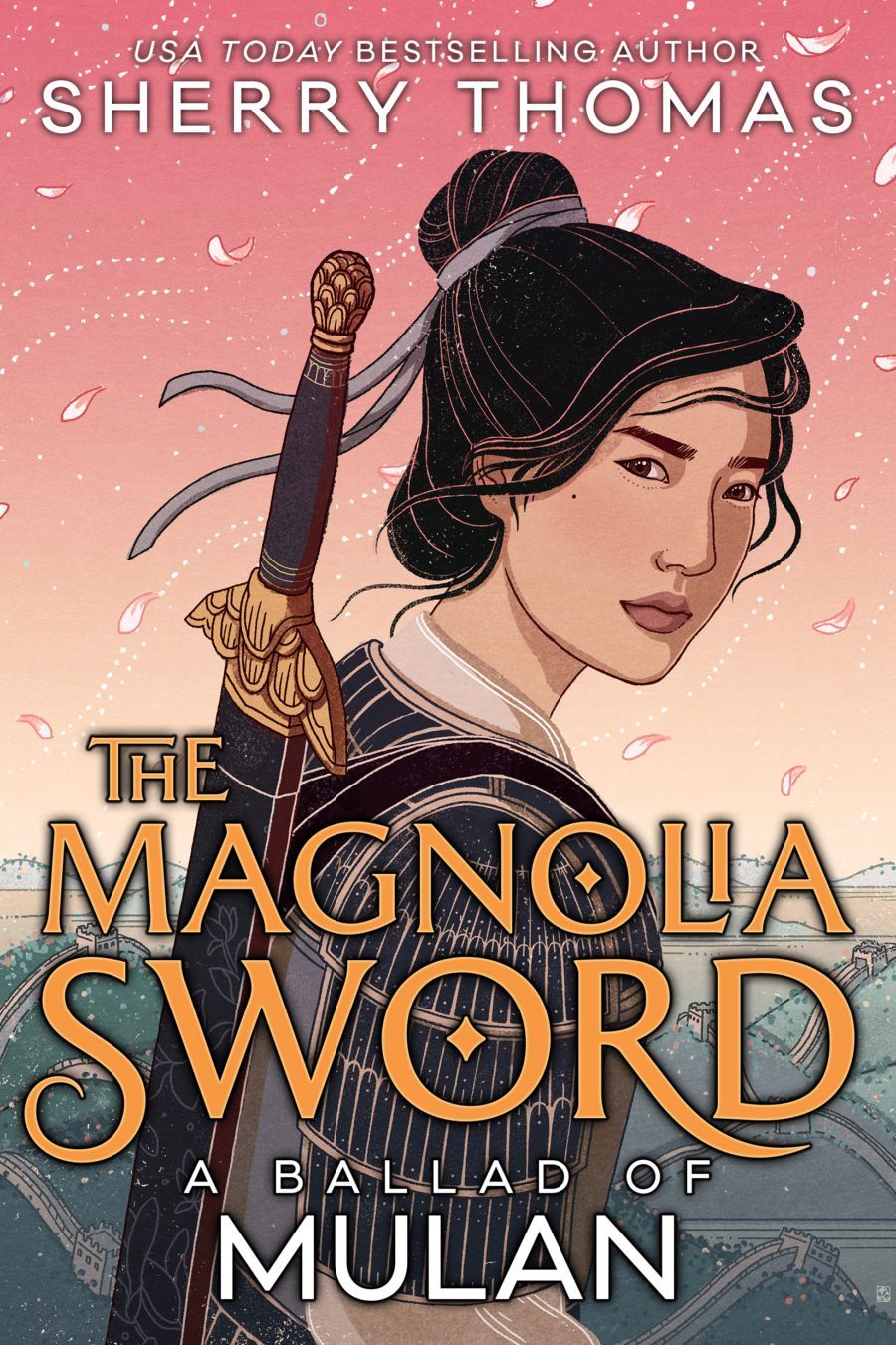 The official synopsis for The Magnolia Sword reads:

A Warrior in Disguise
All her life, Mulan has trained for one purpose: to win the duel that every generation in her family must fight. If she prevails, she can reunite a pair of priceless heirloom swords separated decades earlier, and avenge her father, who was paralyzed in his own duel.

Then a messenger from the Emperor arrives, demanding that all families send one soldier to fight the Rouran invaders in the north. Mulan’s father cannot go. Her brother is just a child. So she ties up her hair, takes up her sword, and joins the army as a man.

A War for a Dynasty
Thanks to her martial arts skills, Mulan is chosen for an elite team under the command of the princeling, the royal duke’s son, who is also the handsomest man she’s ever seen. But the princeling has secrets of his own, which explode into Mulan’s life and shake up everything she knows. As they cross the Great Wall to face the enemy beyond, Mulan and the princeling must find a way to unwind their past, unmask a traitor, and uncover the plans for the Rouran invasion . . . before it’s too late.

Read an exclusive excerpt from ‘The Magnolia Sword’

Captain Helou places his hands behind his back and looks around the gathering. “Anyone else here think he is an exceptional martial artist? Better come forward now. His Highness and I are leaving.”

“Where are they going?” I ask Gao. “And why would the royal duke seek martial artists?”

“I don’t know—I just got here myself,” says Gao. “Maybe to guard the princeling. You want to try?”

Do I? I do want out of this encampment—if I never see those sanitation trenches again, it will still be too soon. But in a smaller group, members pay more attention to one another. How well can I pretend to be a man under close scrutiny?

And if the princeling and Captain Helou should realize that I am a woman . . .

The crowd has fallen silent, waiting for someone to step up. But now murmurs stir again. Captain Helou salutes the gathering.

“If no other hero will come forward, then everyone please take care. Let us meet again on an auspicious day.”

He heads for his horse.

I stride onto the training ground, past my astonished companions, past ranks upon ranks of conscripts, their faces lit with anticipation, before coming to a stop fifteen paces from Captain Helou. “This lowly conscript is an ignorant nobody. But with His Highness’s and the commander’s indulgence, I would also like some instruction.”

Compared to the niceties I’ve been taught, this request barely qualifies as polite. But it has been a long day, and I’m less inclined toward elaborate courtesy when I’m dressed as a man.

Captain Helou grins. The commander frowns. And the princeling stares at me as if I have challenged him—a look that could fell trees.

I stare back at him. In that moment, I do not remember his parentage or that I am hoping to become one of his protectors for the sake of my own safety. In that moment, he is only a potential opponent who must know that I am not daunted.

Often the outcome of a contest is decided before either party unsheathes a sword.

I come to my senses only when Captain Helou speaks. “Very well. Young xiong-di, do you have a weapon of choice?”

He means the sword on my back, but I am loath to draw Heart Sea. After a lifetime of being inculcated on its immeasurable worth, I don’t want to let anyone see it unless absolutely necessary. However, I’m also reluctant to get into a fistfight with Captain Helou.

My gaze flickers to the weapons on his back. “Captain Helou has a bow and arrows.”

“I do. Would xiong-di prefer a shooting contest?” He sounds amused.

I incline my head. “Captain Helou, please shoot. I will catch.”

“Three of them at fifty paces—while blindfolded.”

Captain Helou’s jaw drops. A collective gasp rises. And then excited murmurs spread as men within earshot pass on the word to those who are too far away to hear what I said.

I don’t catch arrows as a normal part of my practice, but at fifty paces—and I plan to make those big paces—an arrow’s flight would be almost spent. Captain Helou looks up at the princeling, who considers me and says, “We will have our eyes opened today.”

He is more soft-spoken than I anticipated, the Northern accent in his speech crisp rather than harsh.

“But won’t it be too dangerous, Your Highness? It wouldn’t be auspicious for something to happen here.”

“Young xiong-di there isn’t worried. You needn’t be either, Captain,” replies His Highness.

“The day grows late,” the princeling reminds him. “We should leave soon.”

Captain Helou bows. “Of course, Your Highness.” He turns back to me and gestures at the avenue down the center of the training ground. “Let’s proceed, young xiong-di.”

He picks the spot where he will stand. I measure out fifty paces, hundreds of men softly counting alongside me. I pull out a large kerchief, fold it diagonally, and cover my eyes, making sure the blindfold is wide enough that no one can doubt its effectiveness. And then, as a precaution, I take my sword in my left hand. Should I be completely mistaken about how fast the arrows will arrive, at least I’ll have something I can use to deflect them.

The crowd falls silent. My heart beats fast, but I don’t feel any more nervous than during practice sessions with Father. I inhale slowly and exhale with just as much care and deliberation.

The arrow leaves the bow with a soft twang, its calm flight producing a very gentle sibilance. The depth of my training is such that I need only a fraction of a moment to discern a flying object’s speed and trajectory. And what I hear is Captain Helou’s great chivalry. Not only has he drawn the bow just enough for the arrow to reach me, but he has aimed at least two handspans to my right.

I reach out and snatch the arrow from midair, its shaft smooth beneath my fingers.

The crowd cheers raucously. I drop the arrow and wait for them to quiet down, feeling just a little smug.

This time he fires without warning, but the arrow’s flight is still leisurely and again a bit wide—to my other side. Still holding Heart Sea, I pluck the arrow with my left hand.

The cheering is twice as raucous.

“Magnificent!” cry Captain Helou and the commander in unison.

I hold myself back from smiling. This contest isn’t over yet.

I exhale and focus. This time, the arrow will come straight at me. Faster too, as Captain Helou knows now that I am not putting my life in jeopardy. This, then, will truly be a test of my skills and reflexes.

But the arrow doesn’t come.

The conscripts begin to whisper. “Look, look! My Heavens! Nobody can catch that!”

What is going on?

Abruptly silence falls again. I bow my head slightly and try to loosen my shoulders. My heart thuds, not knowing what I’m up against, only that it has dismayed the entire crowd.

Thoughts begin to whirl in my head. I force them out. I cannot let my concentration lapse. I cannot—

No, not one arrow: three. Headed directly at me, with a velocity that freezes my blood.

I yank out Heart Sea and slash at the oncoming arrows, even as I bend backward to avoid them. The legendary blade is so sharp that I barely feel it slicing through the shafts. Somehow I catch one of the broken pieces in my left hand as the rest plummet to the ground all around me.

With difficulty, I straighten. I am panting. I throw aside the broken arrow and drag off my blindfold.

Only to see, fifty paces away, the princeling standing on his horse, lowering the bow in his hand.

Lee & Low is providing three ARCs of The Magnolia Sword by Sherry Thomas. Winners must have a U.S. address.

The Magnolia Sword by Sherry Thomas hits store shelves on September 10, 2019. You can pre-order it from Amazon, Barnes & Noble, IndieBound, and Book Depository, or add it to your Goodreads list.