The Magicians is returning to Brakebills with a new comic series this fall. Lev Grossman chats with Hypable about bringing the world to the place it was meant to be.

It’s been 10 years since The Magicians, Lev Grossman’s first book in what would become a trilogy, a television show, and a graphic novel. The story of Quentin, Eliot, Julia, Penny and the rest of the original cast have taken readers from the grounds of Brakebills to Fillory and back again over on SYFY for four seasons, but it wasn’t until Alice’s Story that Grossman’s work took on the medium he fought long and hard to acquire.

Together with writer Lilah Sturges and artist Pius Bak, Alice’s Story took a character very present, but often unheard from in The Magician’s novels and retold the events of the first book from her point of view. The graphic novel provides a fantastic reentry point to the series that can reinvigorate any fan.

At New York Comic Con, we sat down with Grossman who spoke with us about the new generation of students to enter Brakebills, finding a new and exciting avenue for the original story to travel down, and the one item he wants from the set of the series. 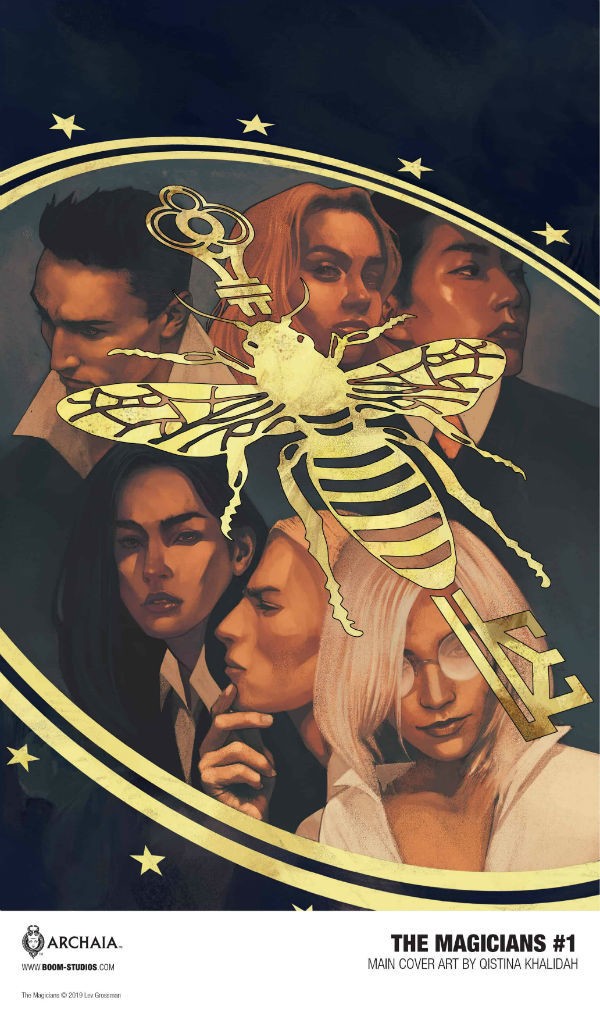 What keeps you excited about returning to ‘The Magicians,’ especially the original story in the graphic novel?

I always wanted to do a comic and I always knew we were going to get there eventually. But it was surprisingly challenging from a legal point of view to pry loose that intellectual property. Old school publishers look askance at graphic novels. It was really hard to make it happen and we had to really force it through, but I always wanted to see [the characters].

[The Magicians] has always been a very visual thing – magic is always very visual, the spells, the hand positions – and as hard as I worked in the prose to make people see it, part of me sort of thought, ‘Why don’t I just show it to them like in a drawing?’ So, I always felt like I knew we were going to get there and finally we did.

In a way we were coming back to these things in a new medium, but in a way it was always meant to be like this. It seemed inevitable.

I have a copy [of ‘Alice’s Story’] on my coffee table, and it’s so easy to pick it up and flip through it and getting that instant gratification of seeing your favorite scene as opposed to sitting down and reading through the book. One of my favorite pages is seeing an actual page from the Popper’s handbook with the hand positions on the page.

What were some of the more challenging scenes you discovered through this collaboration and what were the most exciting ones?

The exciting scenes were the new ones, the things that got short tripped in the book. For example, when Alice comes to Brakebills for the first time she wasn’t invited so she has to force her way in. She spends a terrible night in the forest looking for Brakebills. She knows it’s there, but she can’t find it.

This is something that she mentions to Quinten in the books, but we never see it narrated from her point of view. It’s a scene that crops up in the fan art a lot. It’s a very emotional moment, but it doesn’t happen in the books and the fact that we were able to see it and visit it in the graphic novel, it was very exciting. The color is very flat and subdued for the first five to six pages and then there’s that moment when Alice finds Brakebills and you turn the page and it’s a big spread in bright, bright color. It’s an amazing moment and it was one the things that reminded me why we were doing this.

There are moments like that and moments just with Alice alone that we didn’t get in books. She is not a point of view character in the books. But in some ways you know that she is thinking and feeling as intensely, if not more so, than anybody else in the books.

I was a little afraid to go there when I was writing it, but Lilah was not. It felt very natural to her. It’s really thrilling and great to see that realized on the page.

When you were setting out to adapt ‘The Magicians’ into a graphic form, what was the collaboration process like?

I come in during act one and again in act three. Act one, Lilah and I work out the story and Lilah, Pius and I work out the character design. There is a lot of back and forth and then they go off, and then we come back and I go over the script and the pencils. So, I’m there in the beginning and at the end.

Shifting gears a bit, next month we have the release of the Magicians comic series. What can you tell us about them?

We’re starting with a five-issue arc, which is very much one story. It’s not that episodic, it’s very arc-y.

When you were building these new characters were there parts of Brakebills that you wanted to explore more that you weren’t able to? 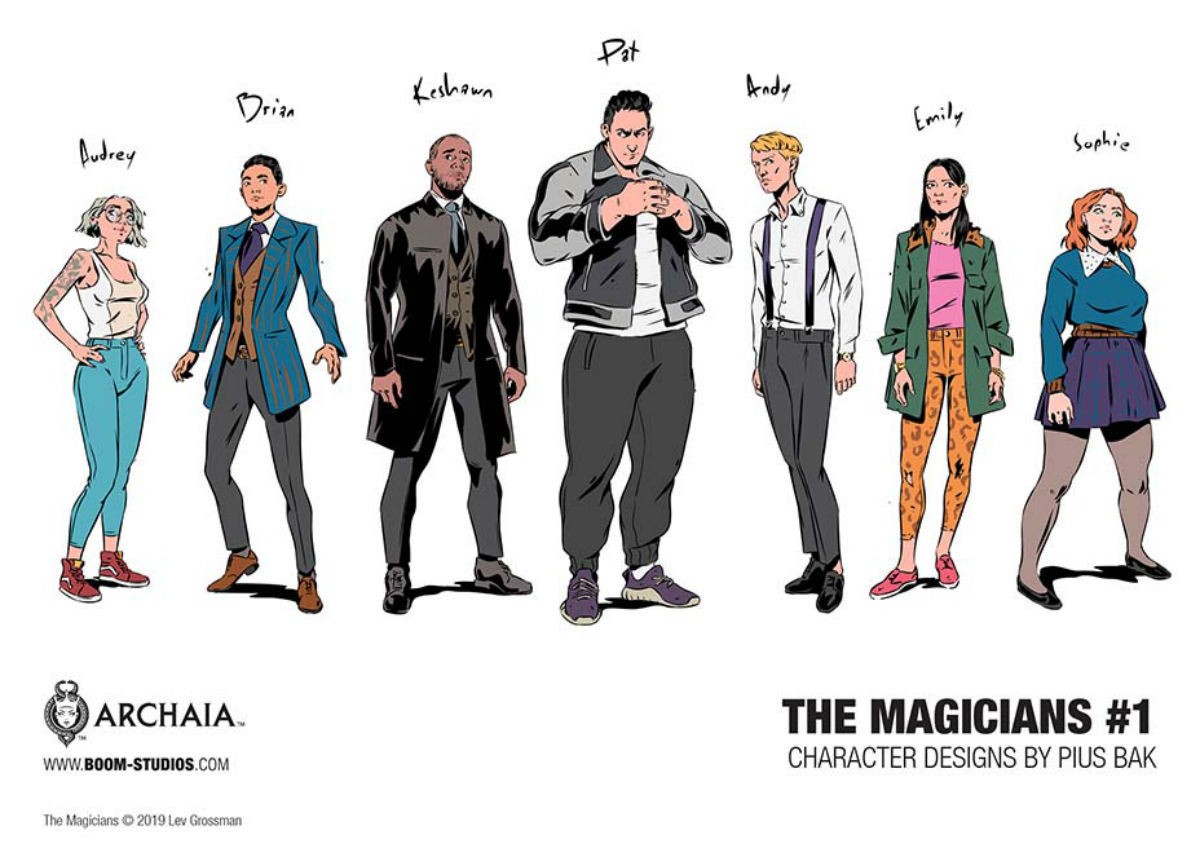 Yeah, absolutely. Brakebills is so much the heart of the books and yet the characters graduate halfway through the first book.

Yeah, we’re not there that much.

The circles kind of widen out from [Breakbills]. But it’s such a rich, intense little universe, and there’s so much lore in it. One of the decisions we made early on was to burrow into that and see what’s down there, what’s in the basement at Brakebills. What kind of interactions [are taking place], what’s happening in the faculty lounge, what kind of tensions are there between students?

[Brakebills has] a lot of weird and intense people thrown together in this very volatile environment, there’s so much drama in there and so many stories. We really get to dig into Brakebills which is something that I kind of love.

Even on the television show, they leave it behind pretty quickly and we didn’t want to do that because it is such a fun place to hang out.

Personally, I love Brakebills South. I would want to hang out there.

You know in the show, there are these sweaters. Everybody gets a sweater when you go to Brakebills South, it’s like a 70s Scandinavian, Nordic ski team sweaters and I love them so much. I’ve been hinting very broadly to the showrunners that I would like a sweater from Brakebills South.

Nothing yet, I’m still waiting.

If you could tease the new series, what’s the elevator pitch?

The Magician’s universe is split into two: the ivory tower of Brakebills and the street world of the hedge witches. Those two worlds are kept separate for very good reasons, so naturally Dean Fogg is going to smash them together and when he does, it’s going to explode. It’s so destructive and shocking when it happens.

It’s very cool, there is a lot of violence in The Magician’s universe and it’s cool to see how it plays when you see it visually. Violence in prose it’s just not that graphic, bad things happen, and you are imaging them, but you can kind of let them go. In comics it’s more intense and you see things that are shocking in a way that traditional novels that just never are. 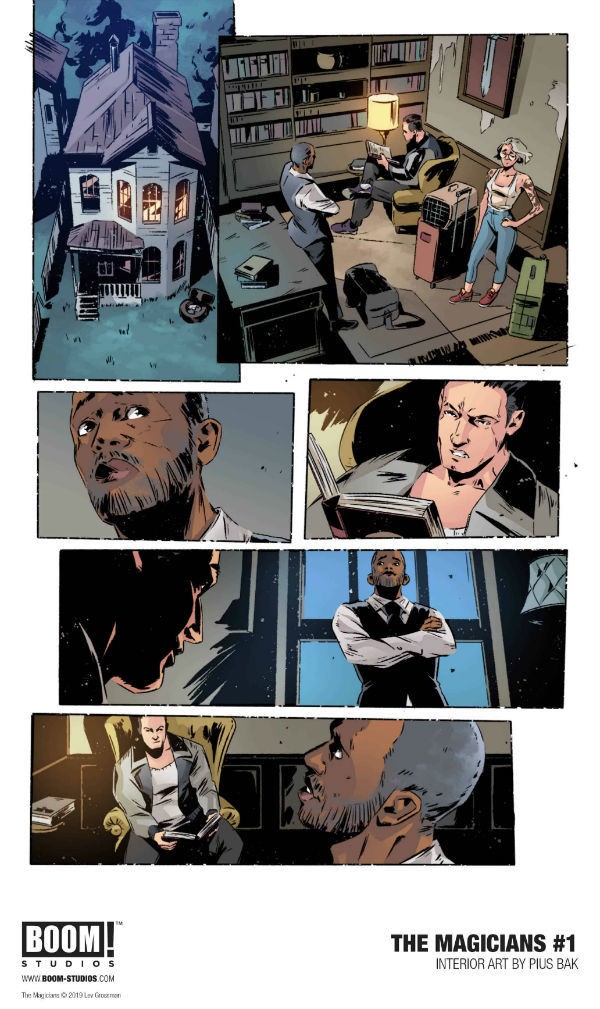 There’s a difference between reading 12 pages about a wound and seeing it graphically displayed in a panel.

Right, and every once in a while The Magician’s universe begins to feel a little cozy, a little Hogwarts-y, ‘Isn’t this pleasant? We are in magic school and we can have wine’ and stuff like that.

Then there is that shock where you remember there is no safeguards here, this is a very grown up book. There’s a real couple of those moments in the comic that take you by surprise.

What are some of the graphic novels that inspire you as you were developing this project and over your career?

There’s always cool stuff happening that you can sort of bounce off and you see that [at places like Comic Con]. In San Diego one of the comics I discovered was Once & Future [by Kieron Gillen and Dan Mora] the Arthurian comic that Boom! is doing and it is incredibly smart and dark. You think you’ve seen everything done with Arthur and yet it twists it around in a way that’s really sharp and interesting.

For me, I can’t emphasize enough what a big presence Alan Moore is for me and I find myself going back quite frequently to Miracleman and The Watchmen and The League of Extraordinary Gentlemen, especially the early ones. I feel like there is so much integrity in those books, so much intelligence in them, and it reminds you how to do genre in a way that will not tolerate bullshit. More than anything else, I go back to those.

And for some reason, I’m obsessed with Flaming Carrot [series by cartoonist Bob Burden]. I asked an audience here on Thursday who was into Flaming Carrot and no one had heard of it. Have you?

It’s just one of these huge classics that time is burying, it’s a satirical comic about a guy who wears a big carrot mask and doesn’t have any powers. It was big in the 80s and just so sharp, it’s a shame that nobody remembers it. Google it, you won’t regret it.

The Magicians #1 will be available at your local comic shops, digital providers, and BOOM! studios web store on November 4. Alice’s Story is available now.