We use cookies to ensure that we give you the best experience on Hypable. If you continue to visit us, we will assume that you are happy with it.
9:05 pm EST, November 21, 2019

‘The Good Place’ season 4, episode 9 review: Wake up and solve it again

“Sure, I was written up in a medical journal as the youngest person ever with a stress-induced ulcer, but I got into the Good Place!”

After the humanity-wide concerns of last week’s episode, The Good Place season 4, episode 9 shrinks its gaze to study one man who Kant… sorry, can’t make up his mind.

What happened on ‘The Good Place’ season 4, episode 9?

As Michael restores Chidi’s many lives worth of memories, Chidi flashes through his experiences. In his first recollection (after an infant panic over the question of his name), young Chidi wakes up to hear his parents arguing. He creates a researched lecture for them on why they shouldn’t get divorced, complete with informational pamphlets.

His parents are touched and persuaded, leaving Chidi elated — and convinced that there is one right answer to every single problem that can always be deduced with enough research and thought.

Then, Chidi is a grad student. His girlfriend breaks up with him, sick of his inability to get out of his own head. He drives his thesis advisor insane with an impenetrable thesis devoid of heart, and his work is rejected. Chidi’s friend Uzo tries to get through to him, to no avail; later, Chidi’s obsessed procrastination angers Uzo and leads to Chidi’s death by air conditioner. 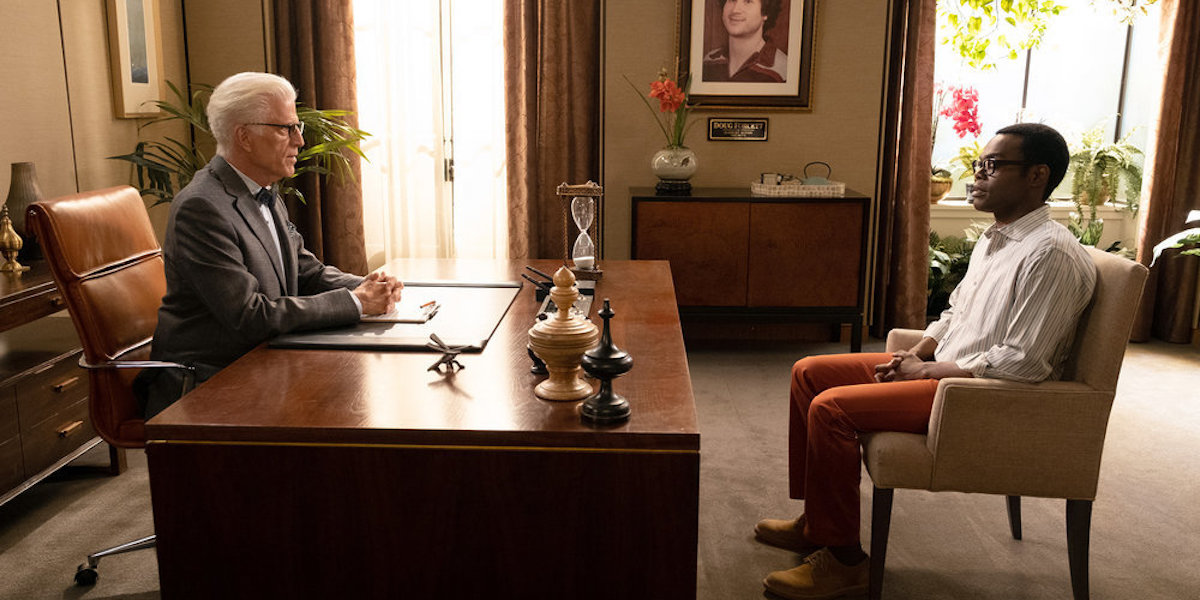 Chidi arrives in the Good Place, where he asks Michael about the the answer to his ultimate question: his soulmate. Michael tells him where to find Eleanor, and he remembers the various arcs of their relationship. At Janet and Jason’s wedding, Jason advises Michael on seizing the day, but Chidi doesn’t feel that he’ll ever be able to live so boldly, even in the afterlife.

In another iteration of the Bad-Place-as-Good-Place, Chidi’s soulmate is a bat in human form named Esmerelda. When Esmerelda storms out of Tahani’s game night, Tahani arranges for Eleanor to take her place. Chidi asks Tahani how she can approach the unknown with such confidence, and she says it’s about learning from failure. Chidi can’t imagine making any move without knowing the answer.

Eleanor recruits Chidi to help her with ethics, and they hit it off. Eleanor kisses Chidi, but he doesn’t want to pursue a relationship, even though he is miserable with Esmerelda, He thinks they just have to find the answer for how to get out of their “rough patch” — like his parents did. 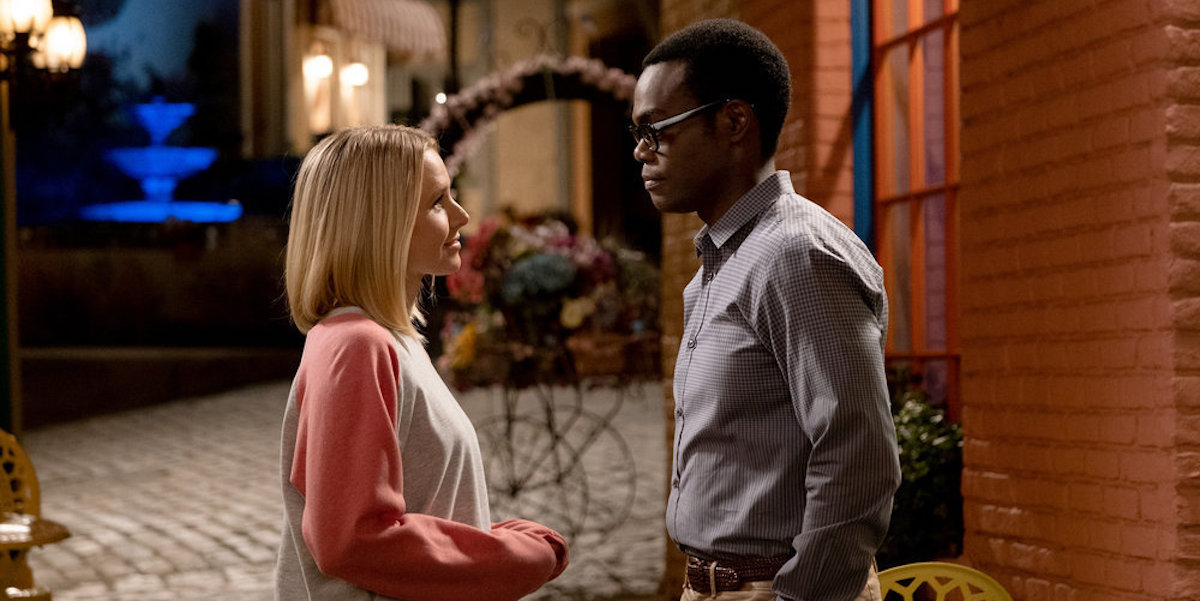 Eleanor points out that saving his parent’s marriage is too much of a burden to put on a kid, and it’s a shame that he had to think he was responsible for solving the world’s problems. Chidi still doesn’t see the problem.

Finally, Chidi remembers saying goodbye to Eleanor and going with Michael to have his memory erased. Chidi asks Michael if soulmates are real; Michael doesn’t think so. He tells Chidi that soulmates are not found, but made and worked on by the people in the relationship — including Chidi’s parents, who went to counseling after hearing Chidi’s lecture. But they weren’t persuaded by his argumentation; it was Chidi himself, and the reminder of why they loved each other, that helped his parents through.

“It turns out life isn’t a puzzle that can be solved one time and it’s done,” Chidi realizes. “You wake up every day, and you solve it again.”

Overwhelmed by this understanding, Chidi takes a moment to leave a note with Janet. She promises to return it when they meet again, and Chidi goes with Michael. 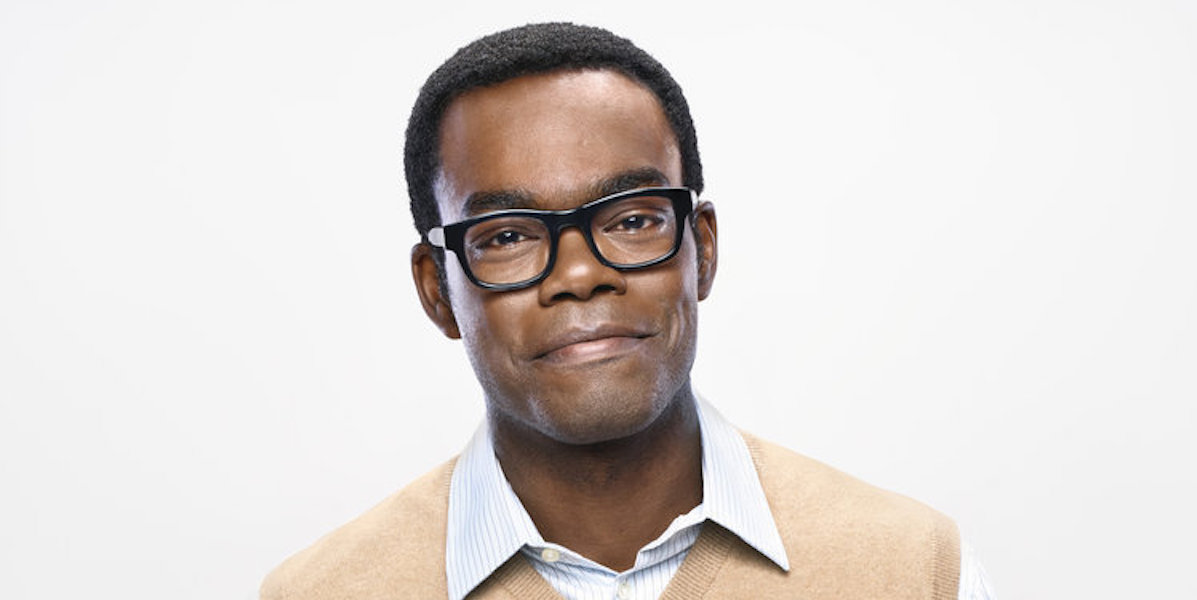 In the courtroom, Michael finishes snapping his fingers. (Jason spills his drink.) Chidi wakes up feeling fine. He apologizes for being annoying for the past 300 years, and thanks the group for what they’ve done for him. Eleanor breaks the news that has an hour to create a new afterlife and save humanity; to find, in other words, the ultimate answer.

Chidi isn’t sure there is an answer, but wants to get to work. But first, He asks Janet for his note back, as it’s some of his best writing.

Okay, first of all, please join me in saying “Awwww!”

Beneath all of the cosmic concerns that have animated this final season of The Good Place, the unresolved state of Eleanor and Chidi’s relationship has lurked like a splinter. Now, finally, the two not-soulmates have been validated in what might be the most quietly epic romantic beat in television history. 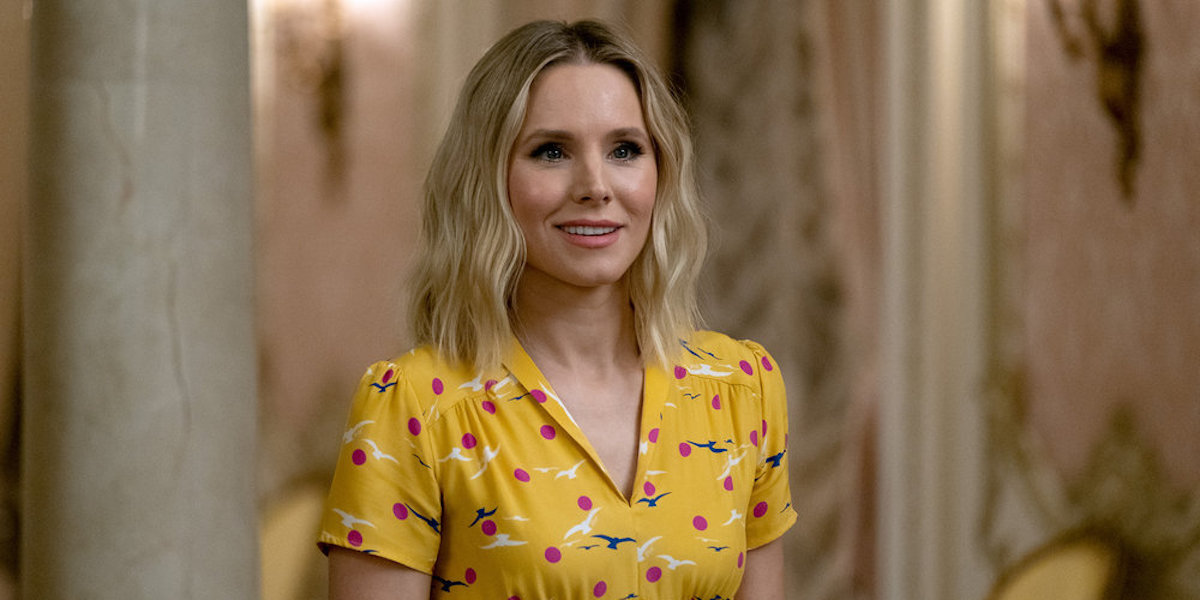 Chidi hasn’t just returned to Eleanor with his memories at the end of The Good Place season 4, episode 9. He has returned with the thing he has always been seeking: Not an answer, but an understanding.

William Jackson Harper portrays this by investing Chidi with an incredible and new stillness. Even his voice levels out as Chidi comes into his new conception of reality. It took him two lifetimes and hundreds of afterlives, but finally, Chidi has learned.

There is no single answer to every problem. There may not be any right answer to any given problem. The moral universe can’t be understood in a rigid binary of right and wrong. It functions instead in a constant convolution, a great and endlessly repeated effort to find the unique right of today, or this hour, or this very moment. 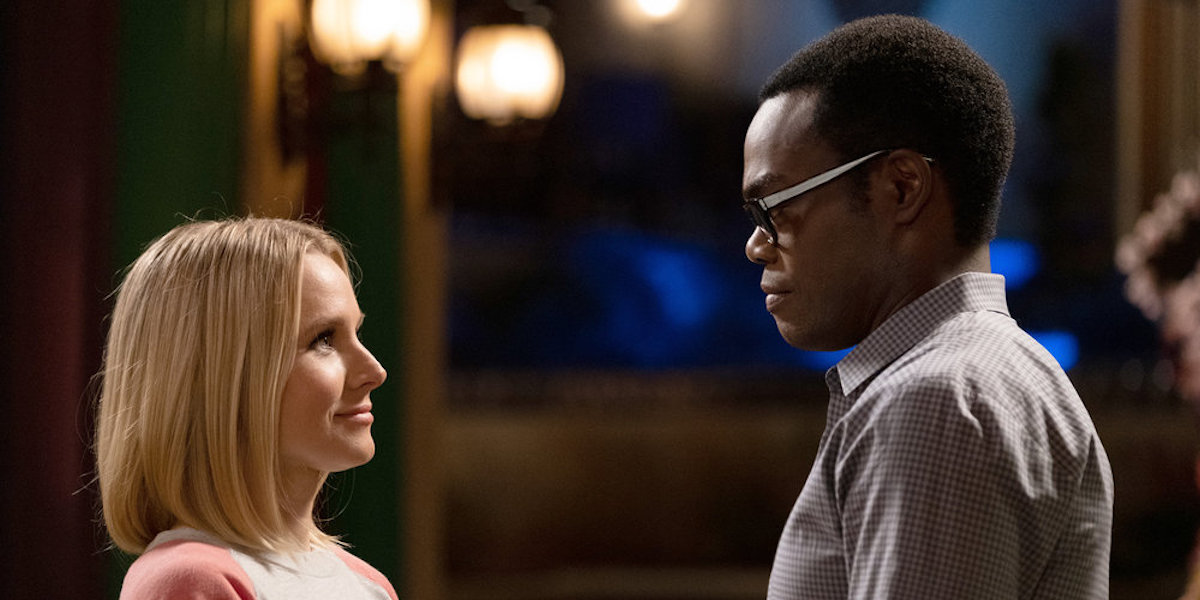 This epiphany provides a unique resolution to Chidi’s perpetual discomfort with uncertainty. An active moral universe does not preclude the possibility of certainty, only its inevitability. Chidi’s own words to himself, “Eleanor is the answer,” prove that he feels the certainty he longed for in the concept of a soulmate.

But as Michael wisely says, this is something that Chidi and Eleanor have, time after time, built themselves. In different ways, in different lives, they have — much like the moral universe — achieved resolution in each other.

It’s worth noting that by portraying soulmates and morality as living, active concepts, The Good Place season 4, episode 9 sets itself again the idea of happily ever after — or indeed, of “the end” at all. In a universe of endless potential (true of humanity, as previously demonstrated on the show, and true of everything else) even the Nirvana-esque clarity that Chidi, Eleanor, Tahani, and Jason have achieved is no guarantee that events (or people) will play out as hoped. 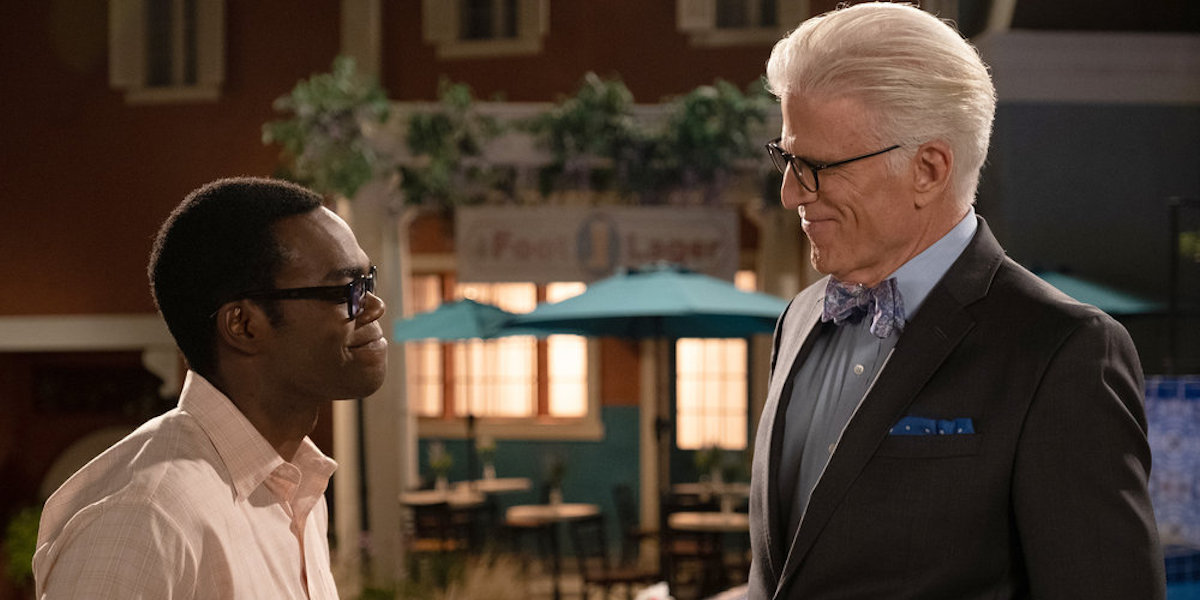 Which means that, as The Good Place prepares for its final four episodes, our hopes and assumptions as fans might best be put aside. As an object in motion gradually coming to a stop, The Good Place is not necessarily going to leave us where we’d like to be. But it will, I’m fairly confident, show us how to get there.

Michael: His psyche is like a giant bowl of M&M-Peep chili!

Radja: This work is an insane, tangled web of inscrutability!
Chidi: In the fun, ‘grad students will analyze this for centuries’ way?
Radja: No. In the Unibomber way.

Jason: Chidi, here’s the thing with stuff. You can look at a problem from every angle and drive yourself crazy, but sometimes you just gotta huck a Molotov cocktail at a drone and see what happens!
Chidi: Is what happens that the drone blows up?
Jason: Usually! I mean, where I’m from, most things blow up eventually. So I learned that when something dope comes along, you gotta lock it down! If you’re always frozen in fear and taking too long to figure out what to do, you’ll miss your opportunity, and maybe get sucked into the propeller of a swamp boat.

Chidi: Esmerelda, you don’t bring knives to a friendly game night! I mean, who does that??
Esmerelda: The prepared.

Chidi: Sure, I was written up in a medical journal as the youngest person ever with a stress-induced ulcer, but I got into the Good Place!

Michael: Are you sure you want to do this?
Chidi: I finally make up my mind about one damn thing and you try to talk me out of it?

Michael: If soulmates do exist, they’re not found. They’re made.

Chidi: It turns out life isn’t a puzzle that can be solved one time and it’s done. You wake up every day, and you solve it again.

What did you think of ‘The Good Place’ season 4, episode 9?