The Best Week That Never Happened by Dallas Woodburn combines love, mystery, and magic set against a Hawaiian backdrop. Read an excerpt here!

There’s a lot to be excited about with regards to The Best Week That Never Happened, and it begins with the spectacular cover that provides as much mystery and intrigue as the premise for the book.

Once you’re done perusing every inch of the cover, jump to the exclusive excerpt below to get a sense of what Dallas Woodburn has to offer with The Best Week That Never Happened! 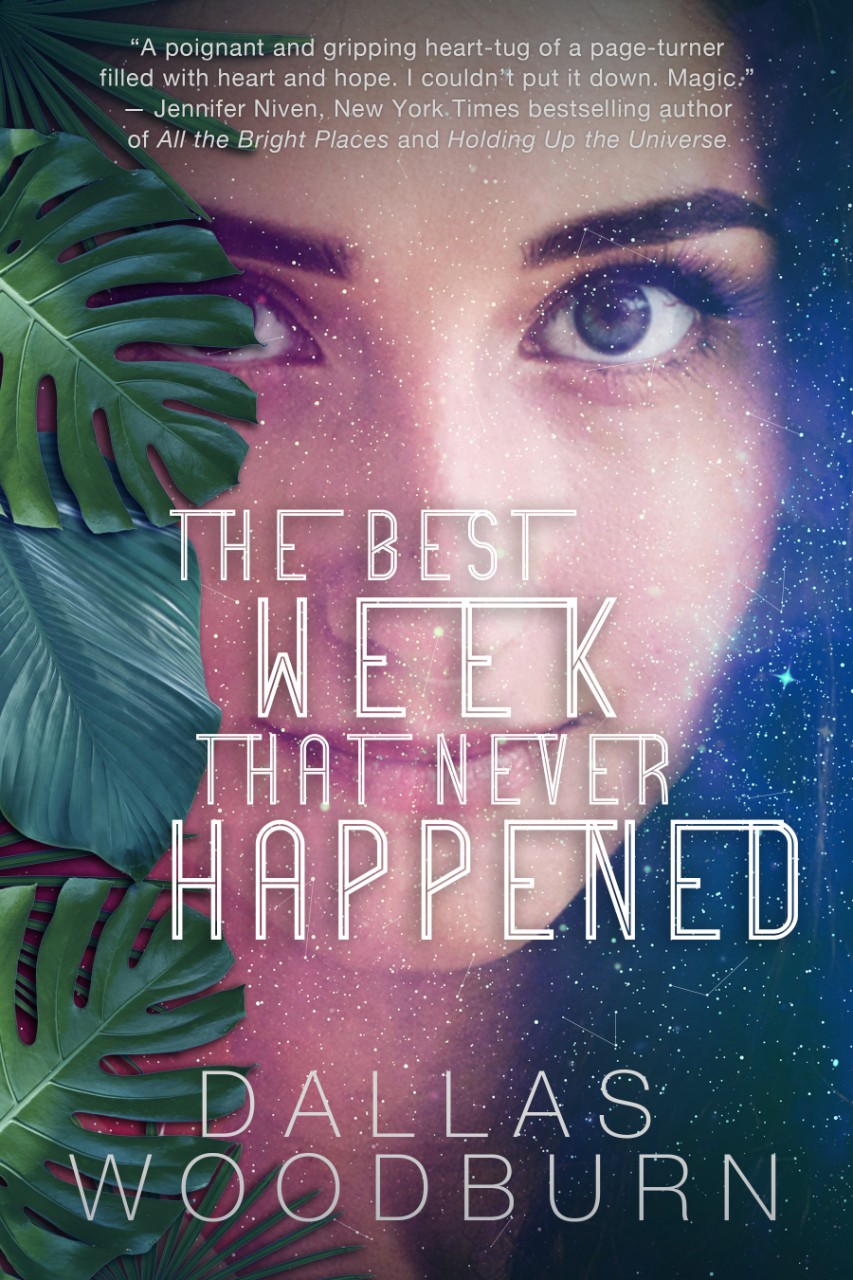 I couldn’t remember when I had ever been so nervous. You’re being stupid, I told myself. Get a grip, Tegan. I prided myself on having nerves of steel. Public speaking, drama auditions, sports tryouts and championship games—I strode through it all with a calm smile on my face. So why did the idea of a midnight excursion with Kai make me so jittery?

It’s just Kai, I reminded myself. Your random childhood friend from a lifetime ago.

Kai was born and raised here on the Big Island, and I had come here with my parents on vacation when I was eight. I first met Kai on the beach when he accidentally knocked over my sandcastle. For the rest of that vacation, he and I were inseparable. I had been devastated to return home. Back then, neither of us owned smartphones. We hadn’t kept in touch. I had always wondered what happened to that little kid I once knew.

For some un-pin-downable reason, seeing Kai again on this trip seemed like a gift from the universe, a remnant of my past washed up onto the shore of the present. Life had been so complicated and difficult—my parents tried to act as if this trip to Hawaii was a normal vacation, but even I could tell it was a last-ditch effort to save their marriage and keep our family intact. Kai was a reminder of a time I was nostalgic for, a time when everything was right in my innocent little world. A time I yearned to go back to.

I slid out of bed and crept through the dark hotel room, carefully stepping past my snoring parents and the land mines of half-empty suitcases and briefcases, and snaking cords belonging to laptops and phone chargers, until I finally reached the oasis of the bathroom. I changed into a sundress, leggings, and my favorite cozy sweater, the only warm thing I’d brought to Hawaii. I didn’t dare turn on the light to put on any makeup. I pulled my hair into a low ponytail, grabbed my mini flashlight from my backpack, and slipped out of the hotel room and down the outdoor hallway until I reached the beach.

That time of night, the beach was deserted. I kicked off my sandals, relishing the cool sand on my bare feet. During the day, the sun baked the sand, making it too hot to step on for more than a few seconds. As kids, Kai and I would race each other from the ocean across the huge swath of scorching white sand, to the Popsicle cart behind the snorkel gear rentals. The trick was to run fast, your toes barely brushing the ground. Still, we would gasp, “Hot! Hot! Hot!” as we ran. By the time we reached the relief of grassy lawn, we usually forgot to care about who had won the race. It felt like both of us had won, turning our tongues into rainbows, dangling our feet in the pool. I would always order cherry. Kai would mix it up—sometimes pineapple, sometimes lime, sometimes blue raspberry—depending on his mood.

My friendship with Kai was like the sand beneath my feet. As kids, our friendship was midday-sun sand, its heat immediate and strong. In the years since then, the sand had cooled. What was our relationship now? Were we still friends? Was he the same person I remembered?

A breeze teased strands of hair out of my ponytail and brushed them into my face. The moon was a glowing china plate in the sky, so white and smooth it looked artificial. I had expected my stomach to be a riot of butterflies, but now that I was actually out of the hotel room, making my way toward the lava tubes—toward Kai—I felt a strange absence of nerves. It seemed like I was separate from myself, watching my actions from a distance. Like I was a character in a novel, turning the pages to see what would happen next.

From the beach, I headed up the path skirting the edge of the golf course. At night, the golf course was abandoned, the golf flags flapping forlornly in the breeze. A pair of seagulls strutted across the green as if they owned it. Across the parking lot, the path turned to gravel. I turned on my flashlight, aiming its narrow beam at the uneven ground, and willed myself not to trip. My nerves had returned with a vengeance. Every step took me closer to Kai. What was he expecting, exactly? What was going to happen? What did I want to happen?

At school, everything was different. I was different. There I was Tegan, captain of the soccer team. Tegan, leader of the student council. Tegan, straight-A student, never shy about raising a hand in class, the girl everyone wanted as their lab partner. I had friends, sure, but sometimes I felt separate from the other kids. No guy had ever asked me out—unless you counted Mark Teng inviting me to lunch that one time so I’d help him with his science fair project. And I’d had little crushes here and there, but all of them faded within a few months, like seeds that hadn’t been given enough water to grow.

My focus was firmly on the future—achieving, striving, succeeding. I was determined to be the first one in my family to attend a four-year university. That goal underlaid everything I did, pushing me toward perfection. I could take risks on the soccer field; I could make a fool of myself in front of the entire student body by acting out some goofy skit at an assembly. No sweat. But I couldn’t take risks outside of the careful parameters I had set for myself. Getting drunk at some party? Nope. Making out with random guys? No, thanks. I’m sure some of my classmates thought I was boring, but I didn’t care. I told myself it would all be worth it, that day I got my acceptance letter in the mail.

Which is part of what made this whole sneaking-out-late-at-night-to-meet-some-guy-I-barely-knew thing so surreal. I didn’t do stuff like this. Maybe I was fooling myself, expecting Kai to be the same guy I knew as a kid. Maybe he was a total asshole. Maybe he was a creep. Maybe he just wanted to hook up. What if he expected to? I mean, I was meeting him at midnight in a deserted cave in Hawaii. Nobody knew where I was. Maybe this was the stupidest thing I had ever done.

I stopped in my tracks, breathing in the cool, damp air, trying to decide what to do. I almost turned around and headed back up the path, back to the hotel room, back to my (hopefully still sleeping) parents. But then I remembered Kai’s buoyant smile, the kindness in his eyes, and the way it had been so normal talking with him even though we hadn’t seen each other in years. Deep in my gut, I trusted him.

So, for better or for worse, I kept walking.

The path began to slope downward, and I knew I was getting close to the lava tubes. Soon, the path turned left around a bend, and my heart thudded urgently in my chest. When I rounded the corner, there it was. Like a place out of my dreams, it looked exactly the same as I remembered…

About ‘The Best Week That Never Happened’

After her parents’ bitter divorce, family vacations to the Big Island in Hawaii ceased. But across the miles, eighteen-year-old Tegan Rossi remains connected to local Kai Kapule, her best friend from childhood. Now, Tegan finds herself alone and confused about how she got to the Big Island. With no wallet, no cell phone, purse, or plane ticket, Tegan struggles to piece together what happened. She must have come to surprise-visit Kai. Right?

As the teens grow even closer, Tegan pushes aside her worries and gets swept away in the vacation of her dreams. But each morning, Tegan startles awake from nightmares that become more difficult to ignore. Something is eerily amiss. Why is there a strange gap in her memory? Why can’t she reach her parents or friends from home? And what’s with the mysterious hourglass tattoo over her heart?

Kai promises to help Tegan figure out what is going on. But the answers they find only lead to more questions. As the week unfolds, Tegan will experience the magic of first love, the hope of second chances, and the bittersweet joy and grief of being human.

The Best Week That Never Happened by Dallas Woodburn will be available on April 21, 2020. You can pre-order your copy now from Amazon, Barnes & Noble, IndieBound, or Book Depository. Be sure to check out the author’s website to claim your special prize package for pre-ordering! Also, don’t forget to add it to your Goodreads list!