We use cookies to ensure that we give you the best experience on Hypable. If you continue to visit us, we will assume that you are happy with it.
4:33 pm EDT, July 23, 2020

The casts and creatives of three Star Trek series virtually united for a table read, a first-look, and some reminiscing as Comic-Con at Home kicked off its first full day of programming.

The new and returning members of the Star Trek universe may not have walked into the cheers and enthusiasm of a packed Hall H this year, but the Comic-Con at Home platform still offered some new clips, title reveals, and all the Patrick Stewart your heart can handle.

Recorded segments fueled a hour-long panel which included interviews with the casts of Discovery, Lower Decks, and Picard. The panel also included a table read of the season 2 finale of Discovery, the entirety of which will be available on CBS.com and CBS Studios’ social networks.

The panel took a moment at the beginning an end to highlight what makes Star Trek great — the hope and passion to realize a better world that is so engrained in all of the properties. Star Trek United was a campaign launched across the Trek platforms to raise awareness and promote organizations who are doing that work everyday. “We endeavored to speak to the vision we want to live in everyday,” Alex Kurtzman said.

“Star Trek is science fiction, but it’s always meant to imagine a future and a world in which people are valued for who they are, the content of their character and not the color of their skin, not their gender, not their gender expression, not their age, and in this explosive time it seems more relevant than ever that we help shine a light on all of those issues,” added Discovery star, Anthony Rapp.

To learn more, and to donate, check out the campaign.

Here are the top moments and takeaways from the panel.

Kurtzman and Hadin talk spinoffs and a new animated series 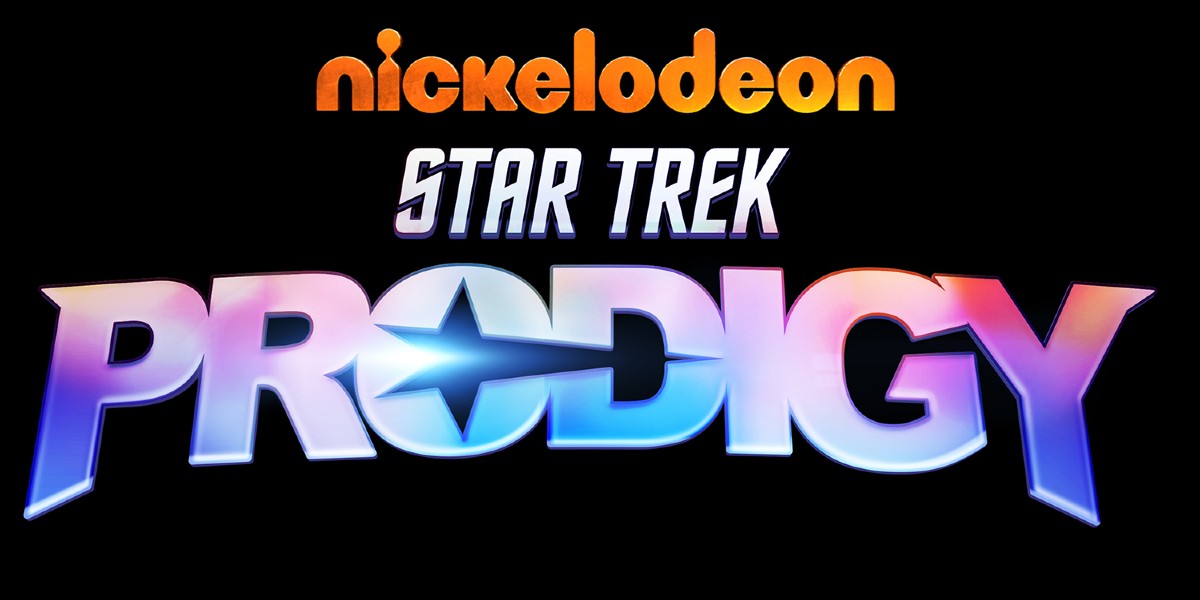 Executive producers Alex Kurtzman and Heather Kadin were on hand to deliver the title of the latest animated series, currently in development at Nickelodeon, Star Trek: Prodigy. The CG-animated series will follow a group of lawless teens who discover a derelict Starfleet ship and use it to search for adventure, meaning and salvation. The series is developed by Kevin and Dan Hageman, whose previous work includes Trollhunters and Ninjago.

The series is slated to premiere on Nickelodeon in 2021.

In news that hits closer to All Access’ Discovery roots, Kurtzman commented on the spinoff series Strange New Worlds staring fan favorites Anson Mount, Rebecca Romijn, and Ethan Peck. Appearing in Discovery as Captain Pike, Number One, and Spock, respectively, the trio are now settled in the timeline as their comrades set course for the future. The experiences and interactions with the departed crew will weigh heavily on them as they adjust back to life on the Enterprise. 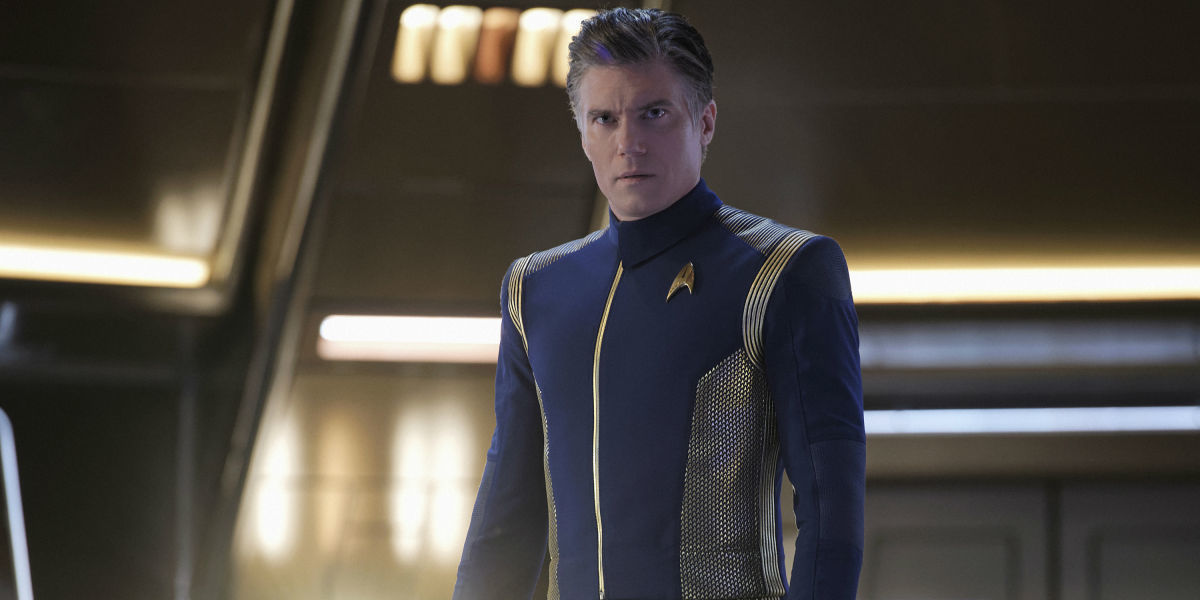 Kurtzman also noted that the writers room has been hard at work and 10 stories are broken for the upcoming series. “It was one of those shows that everyone came in with so much enthusiasm and so much love,” Kurtzman said. As someone who simply wanted more Short Treks, I can confirm, that I will be looking forward to seeing more from these three and the rest of the early Enterprise crew.

When speaking as part of the Discovery panel, Mount said that Pike has a lot of internal burdens, namely knowing his future, that he will need to come to terms with as we move into Strange New Worlds. “When you see how it’s all going to end, and it’s not so pretty, what do you do with that? How do you move forward? I think [Pike’s] probably going to wrestle with how he can best utilize the rest of his life for the good of the world, the universe,” Mount said.

Peck also noted that portraying Spock in the space between his final interaction with his sister Michael Burnham and the iconic place where Leonard Nimoy takes the mantle, is an arena to play. Peck noted how essential it was for Burnham to give Spock the permission to be human and explore all that comes with that. “It’s a huge character point for me,” Peck said. Romijn noted that they in spite of having the weight of their own issues, “a lot of it is surrendering to the unknown, together.” 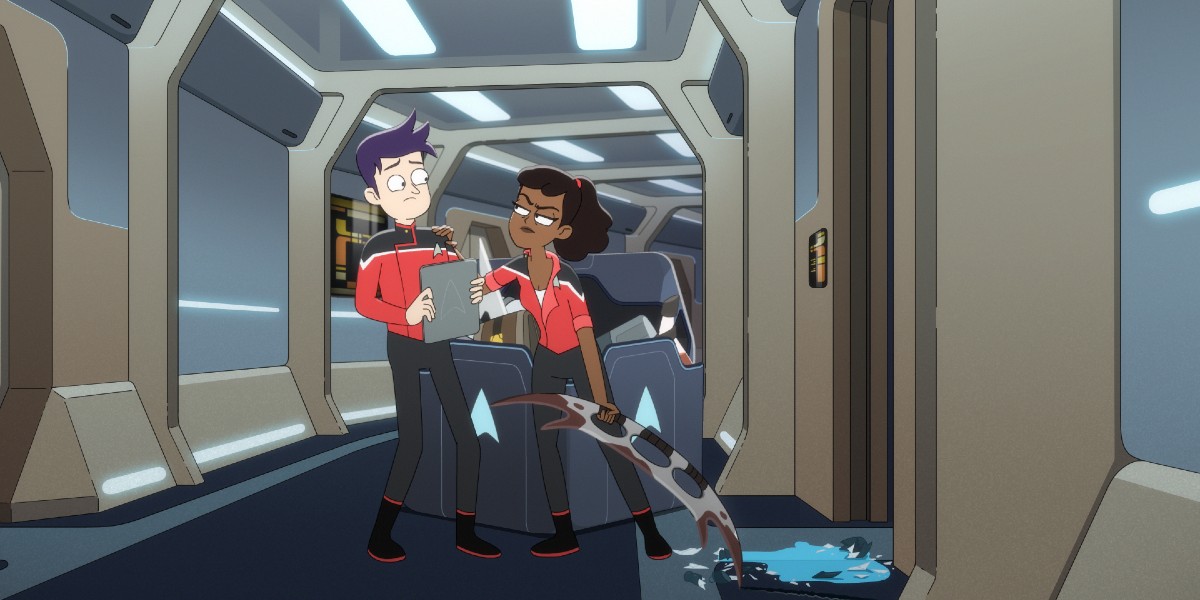 As far as comedy goes, Star Trek has a bunch baked into the scripts. Data, for one, is hilarious. So if Worf. But the pantheon of Trek properties has not leaned on comedy as the crux of an entire series. Enter Lower Decks, an animated comedy staring the crew of the USS Cerritos. Known as the crew who do what should be considered the most important work in Starfleet — second contact — the series follows a group of ensigns who are nowhere near the bridge, but nevertheless aspire to make the most of their missions.

As a fan of animation, I was already on board, but McMahan truly sold the show when he pitched it as, “Obviously it’s going to be exciting for people who are Trekkies, but the show is a totally different perspective and has this comedic bent that we haven’t seen before. If you’re into animation, if you like dark comedic comedies, there’s enough for everybody,” he said.

The series looks to be a great deal of fun, and the cast all had glowing something that is much appreciated right now. And, as confirmed during their discussion, the series will be utilizing the holodeck! Well, when it works anyway… You will not have to wait long to check out Lower Decks as it premieres on CBS All Access on August 6.

Check out the clip from the series now.

‘Discovery’ sets a course for the future 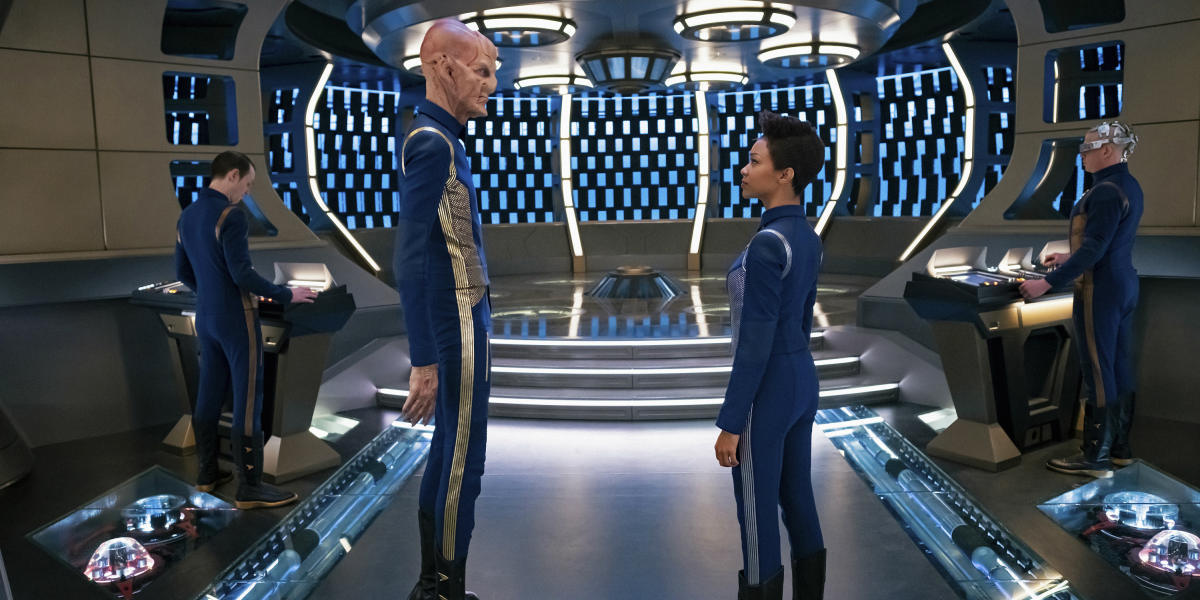 There are many unknowns for the next leg of Discovery‘s journey. The crew, now launched into an unknown future are left with the void of the unknown. Only having each other as allies will surely test their wits, patience, and trust. “The crew of Discovery [decided to] sacrifice everything we have for the future, and so there’s the obvious hope that that works,” Sonequa Martin-Green said of season 3.

Anthony Rapp and Wilson Cruz leaned into the hope that Star Trek affords these characters — that thought the road ahead is not going to be easy or possibly even enjoyable, they all are, at the end of the day striving for the same common goal. “Star Trek has always been this aspiration for our society, for our country, that it has always set a goal, and that it’s been our job to help not only imagine that future, but to create it,” said Cruz, who plays Hugh Culbert.

“To me, one of the great things about Season 3 is that it really blends the personal/family nature of our show, and not just literal family, like our coupledom [Stamets and Culber], but also the family of the ship,” added Rapp, who plays Paul Stamets.

As for the rest of the crew, Doug Jones hopes to see more of his species, the Kelpians having a role in the ranks of Starfleet in the future. Tilly, played by Mary Wiseman, is still going to strive to rise to a leadership position. Meanwhile, icon Michelle Yeoh very bluntly states that Georgiou, taken against her will into the future, will be “very pissed off” at the start of season 3. 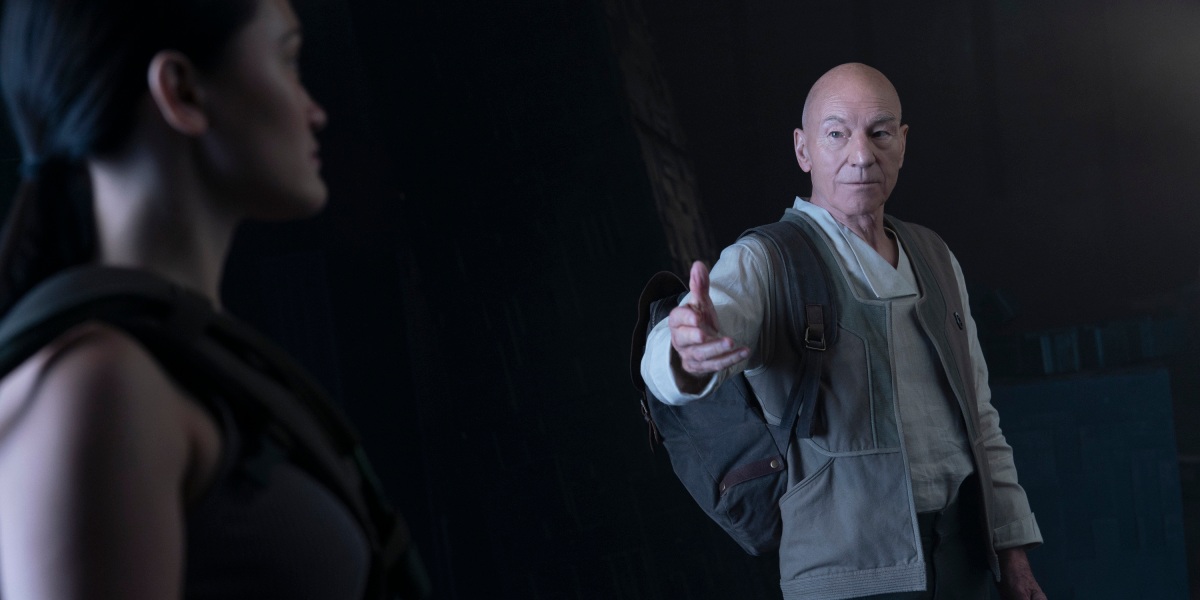 Patrick Stewart, SPS, P. Stew (preferred), has not been shy about discussing his hesitation to return to the role of Jean-Luc Picard. But speaking to that hesitation as the crew prepares to reunite for a season 2, he said, “I made the right decision and it was entirely due to the people that I met my first couple of meetings…I sat for more than two hours listening to them talk about their plans and how they wanted not just to revive Next Generation, but to illustrate the illustrate the years that have passed and that the world was changed and that’s what excited me.”

Jerri Ryan, Brent Spiner, Jonathan Frakes, and Marina Sirtis all expressed their fondness to returning to their iconic roles, with Ryan adding that she was very pleased with the direction and development of Seven of Nine. Jonathan Del Arco, however, expressed surprise at the reaction of the fans seeing Hugh come back after only appearing briefly in the series: “I was honestly surprised at the amount of love I got, and how the fans really craved to know how that adolescent character had evolved into a man. So, that was surprising, and really gratifying.” You were the best of men, Hugh.

The cast lovingly poked fun at one another the entire panel, with Patrick Stewart bearing the weight of most of the jokes. However, the love and connection between these cast members is evident even as special distancing keeps them apart. And that is what makes the show a resounding success.

“We haven’t brought it back, it actually never went away. It was at first very challenging, because thanks to our brilliant team of writers we are living in a very different world, a very complex world, a profoundly troubled world, which might just be appropriate for the time we’re living in,” Stewart said.

Check out our Picard season 1 recaps.

There are no updates on filming for any of the live action shows as the world continues to focus on the health and safety of all the crew members. In the meantime, you can catch up on all things Trek by streaming Discovery seasons 1 and 2, and Picard season 1 now! And don’t forget to tune into the premiere of Lower Decks on August 6.