‘Solve It Squad: Back in Biz’ is a hilarious follow-up to Tin Can Bros’ hit Scooby-Doo parody

Three years ago, the Tin Can Bros impressed us with their stage production, Solve-It Squad. Now, they return to the world of their Scooby-Doo parody with online readings of scripts from Solve It Squad: the Animated Series.

Solve It Squad: Back in Biz consists of four episodes, each lasting about an hour. The first two aired on March 13th, the latter two will stream on March 20th. In a departure from tradition, these readings will not be made available on YouTube for posterity – they can only be watched with a $10 ticket and will disappear after 72 hours.

We watched the first two episodes, and were very impressed. The cast remains as formidable as they ever were: Joey Richter, Lauren Lopez, Ashley Clements, and Gabe Greenspan have an easy chemistry that comes through even when they’re streaming from different rooms. Their comic timing is excellent. While Back in Biz does not provide a showcase for their dramatic talents the way the original production did, it capitalizes on the play’s success by granting the viewer’s wish: to hang out with these characters through some fun times. The characters are developed enough and sympathetic enough to spend your Saturday afternoons with, and that is a big compliment to the entire creative team.

The first episode, “The Solve It Squad to the (Dog) Rescue,” serves as the pilot for the show. Like many pilots, it’s a little bumpy. The introduction of a character parodying Scrappy-Doo, who is just as annoying as his inspiration, serves as a vehicle for some really sophomoric humor and gross-out gags that weren’t quite as funny as most of Tin Can Bros’ material.

Fortunately, that problem disappears in the second episode, “The Solve It Squad Takes a Chill Pill,” where the series seems to settle into its groove. The humor becomes incisive and topical, and having a mystery to solve is eschewed in favor of deepening the characters and relationships. Much like the stage production, this episode has some insightful things to say, though wrapped up in truly hilarious hijinks. The topic, specifically, is about the pressure women find themselves under – and it’s a testament to the three writers (Joey Richter, Brian Rosenthal, and Corey Lubowich) that they tackled it so deftly. 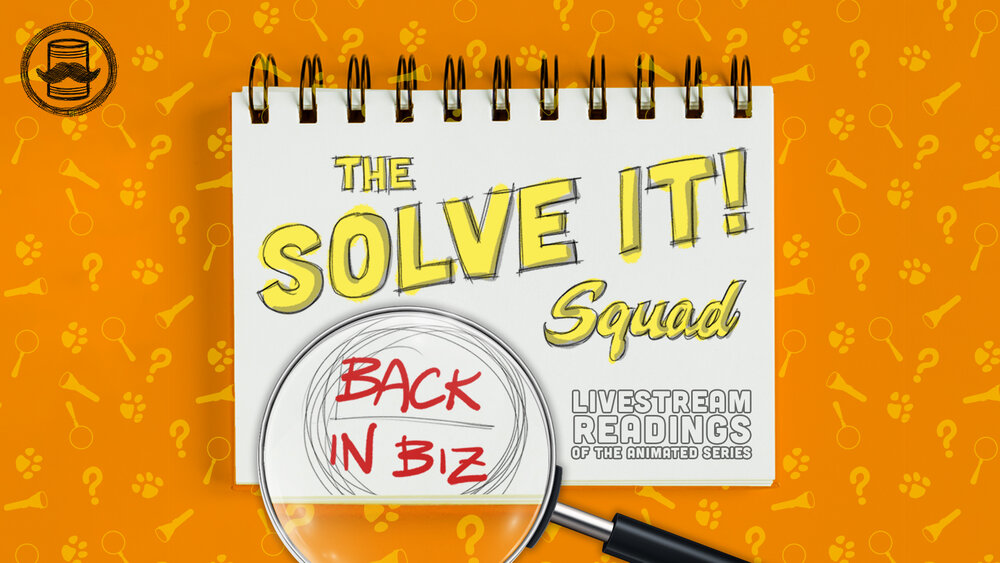 Much as we come to expect from StarKid alumni, the humor remains very current – there is talk of everything from TikToks to capitol insurrectionists during those two hours. Per Brian Rosenthal in the talkback afterwards, this is a feature, not a bug – they plan to update the references accordingly if the dream of turning this into an actual animated series is realized. The immediacy of the humor works really well – just like StarKid’s jokes about Jesse McCartney, Zac Efron, and Spider-Man reboots are still funny years later.

Just like the stage production, Brian Rosenthal plays “everyone else,” and does a great job with the quick changes and funny voices. He is joined in this endeavor by Jiavani Linayao as Episode 1’s special guest to great effect. In Episode 2, the special guest is Robert Manion, who nearly steals the show portraying both Gwen’s husband and daughter. (In fact, this writer very much hopes Gwen’s family becomes recurring characters in the series.) For the next two episodes, the special guests promised are Joanna Sotomura and Darren Criss, and we’re very excited to see what they do – the Tin Can Bros have established their skill at evoking great performances from actors.

Lastly comes the question of technology. As we mourn the one-year anniversary of Zooms becoming ubiquitous, this writer is developing a pavlovian recoil from the very thought of watching people talking in boxes. To TCB’s credit, and specifically stage manager Tammy Babich, the show never felt like a Zoom. With frames deftly popping in and out to show who’s in a scene, and a cheery orange backdrop, it was easy to get lost in the story. There were occasional technological glitches, with lags and such, but on the whole it was enjoyable to watch.

Another commendable factor in the script is the stage directions. It’s not easy to translate a script for an animated series into a live stream, but the descriptions of visual gags and physical comedy were hilarious in and of themselves. They also are incredibly easy to visualize as a vivid animated series.

Fans of Scooby-Doo, and particularly anyone who enjoyed the Tin Can Bros’ Solve It Squad, will be sure to enjoy Back in Biz. Tickets for Volume 2 on March 20th can be purchased from TCB’s website.