Author Brittney Morris is here to discuss her new novel Slay, the card game of the same name found within, and the complexities of gaming while Black.

The complexities of gaming while Black

If you asked me to tell you about the Black gaming experience, I’d ask if you have 90 minutes to sit down and hear the answer. I’d tell you it’s fun. I thank the universe every day I was born Black and grew up to be master of Super Mario Sunshine.

But it’s not all roses and shine sprites.

If you want a glimpse into the not-so-fun side of gaming while Black, just jump into an Overwatch match with the wrong butthurt incel, or check into a Modern Warfare 2 lobby and wait about two minutes. Racism is alive and well. And when you add anonymity to any social environment, including social media, not just gaming, it thrives.

People play video games for endless reasons. Fun (of course), escapism, relaxation, mental stimulation, and community. My book, SLAY, features a virtual Nubian massively multiplayer online roleplaying VR game where Black gamers can experience all of these joys without racial slurs and anonymous toxicity. In SLAY, players can build houses, forage for supplies, craft weapons, and duel each other using cards based on Black culture and Black history. These cards offer players special powers, hexing spells, and defenses, and they’re as diverse and colorful as people across the African diaspora.

Black gamers aren’t a monolith. We don’t all play sports games and shooters (although some of us will annihilate your whole Madden career in a single game). Some of us favor RPGs and MMOs. Some of us play exclusively puzzle or mobile games, and some of us have long-standing friendships with people we met in VR chat. I knew if I was going to write about a global online virtual multiplayer game involving card duels, I’d have to make every inch of it fun, carefree, Black-as-hell, and that it would have to make zero premature assumptions about the player.

In a lot of games, these assumptions start as early as the character customization page. We’ve all played them — games that offer 10 blush colors, 10 eye colors, five different ponytails, one style of cornrows that look more like a striped bike helmet, and one dusty Afro if we’re lucky. The assumption made here is that all Black players can find themselves represented in cornrows and Afros, when there are literally hundreds of thousands of Black hairstyles. SLAY, the game, features braids, cornrows, finger-coils, weave, wigs, Afros, and the twist-out, as worn by the main character, Kiera. And hairstyles aren’t just part of the characters.

In SLAY, you can use your hair to duel. 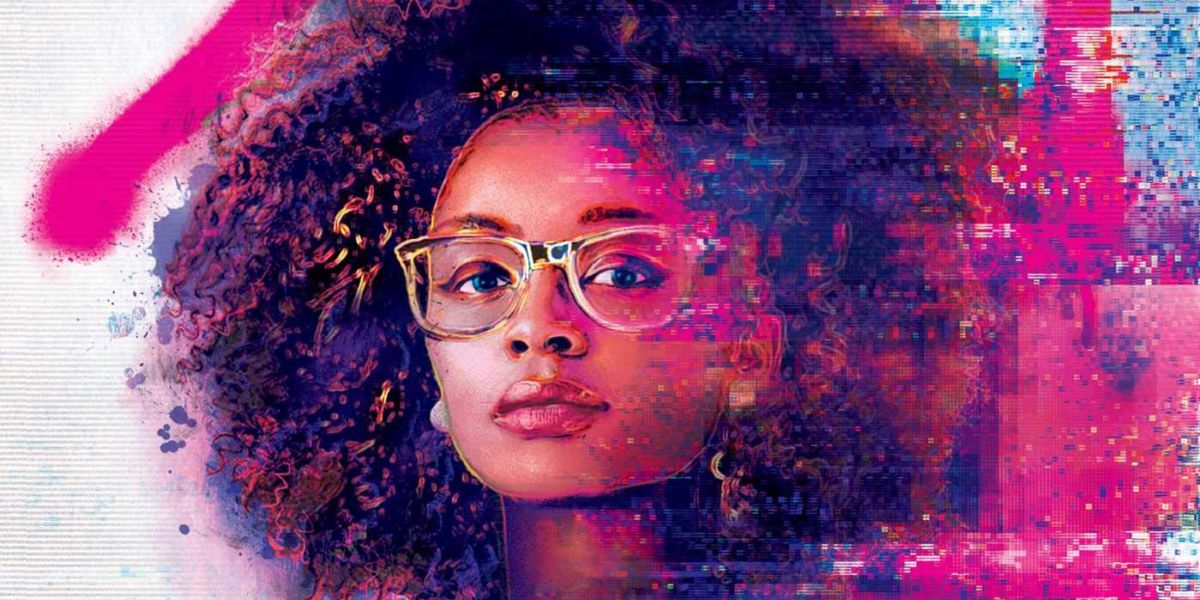 You heard me. The Twist-Out card turns your twists into unraveling, wieldable arms. The Shea Butter card encapsulates the player in a protective creamy buttery ball and blocks damage. And as for skin color, you can be any shade “from Zendaya to Lupita” in SLAY. Finally, some meaningful character options, am I right?

And while hairstyles and skin color are a big part of meaningful representation, it’s not even close to the big picture. I knew while plotting SLAY, which I was inspired to write after seeing Black Panther, that I wanted this game to do more than just look Black. I wanted it to be steeped in Blackness. What does that look like? A Prince card. A Gabby Douglas card. A Mumba Sauce card. And since we know how to have fun, a Boo-Boo the Fool card, and a McDonald’s Money card. And finally, I wanted to include these cards in the game without the assumption that these cards would represent all of the players. That maybe some of the SLAY cards are part of your childhood, or maybe they’re not, and that’s okay. Just like it was enough for me to walk into the movie theater, cross my arms, and say, “Wakanda Forever,” I wanted a VR game in which it’s enough to log in, don whatever custom character elements best represent you, and say, “We Meet at Dawn.”

Being Black is an honor. Being a gamer is fun. Gaming while Black is complex, but not complicated. We want to be taken at face value. We want meaningful representation in games. And we want to be able to play whatever games we want in peace.

Basically, we want what other gamers have gotten since the days of Jumpman.

I hope readers and gamers alike will get two things out of reading SLAY: 1. That no one has the right to tell you to tone down who you are so they can handle it, and 2. Meaningful representation matters. If I could’ve played or read about a game like SLAY when I was a kid, a game with hundreds of thousands of Black players worldwide, I might’ve been more inclined to see myself as a powerful hero and less of a sidekick. I might’ve realized, much earlier, how diverse and infinite Black identity is, and how there’s certainly a place for me in it.

Check out 3 ‘SLAY’ cards you’d be able to find in the game!

Enjoy this exclusive select card reveal of three SLAY cards. To see these cards in action, check out SLAY, the book! Out this September from Simon Pulse. 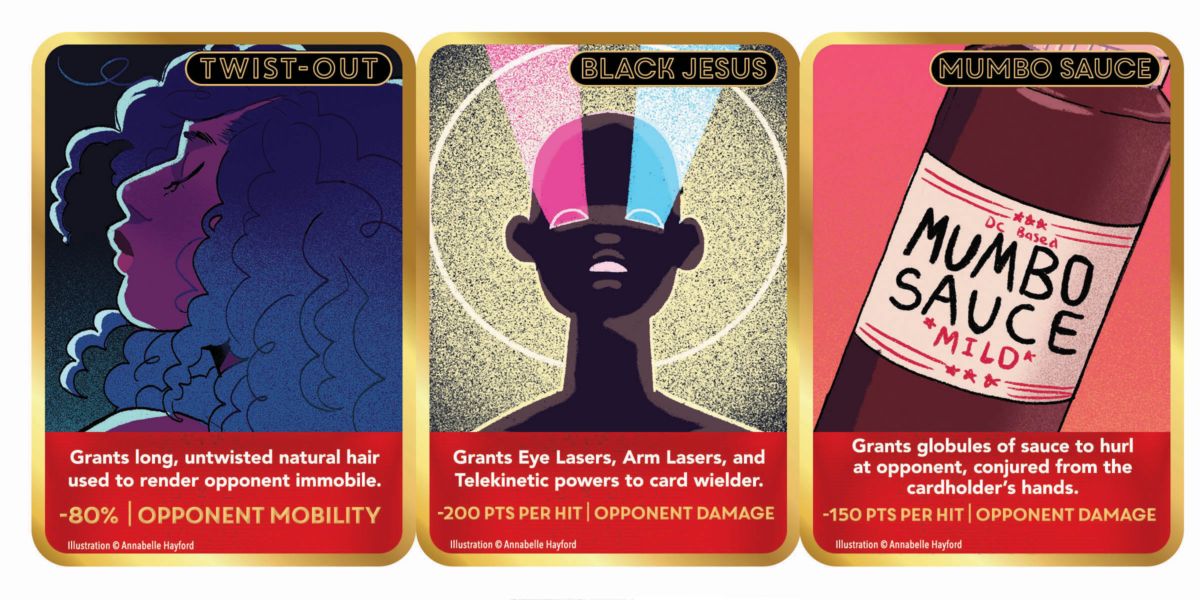 By day, seventeen-year-old Kiera Johnson is an honors student, a math tutor, and one of the only Black kids at Jefferson Academy. But at home, she joins hundreds of thousands of Black gamers who duel worldwide as Nubian personas in the secret multiplayer online role-playing card game, SLAY. No one knows Kiera is the game developer, not her friends, her family, not even her boyfriend, Malcolm, who believes video games are partially responsible for the “downfall of the Black man.”

But when a teen in Kansas City is murdered over a dispute in the SLAY world, news of the game reaches mainstream media, and SLAY is labeled a racist, exclusionist, violent hub for thugs and criminals. Even worse, an anonymous troll infiltrates the game, threatening to sue Kiera for “anti-white discrimination.”

Driven to save the only world in which she can be herself, Kiera must preserve her secret identity and harness what it means to be unapologetically Black in a world intimidated by Blackness. But can she protect her game without losing herself in the process?

Slay by Brittney Morris hits store shelves on September 24, 2019. You can pre-order it from Amazon, Barnes & Noble, IndieBound, and Book Depository, or add it to your Goodreads list. 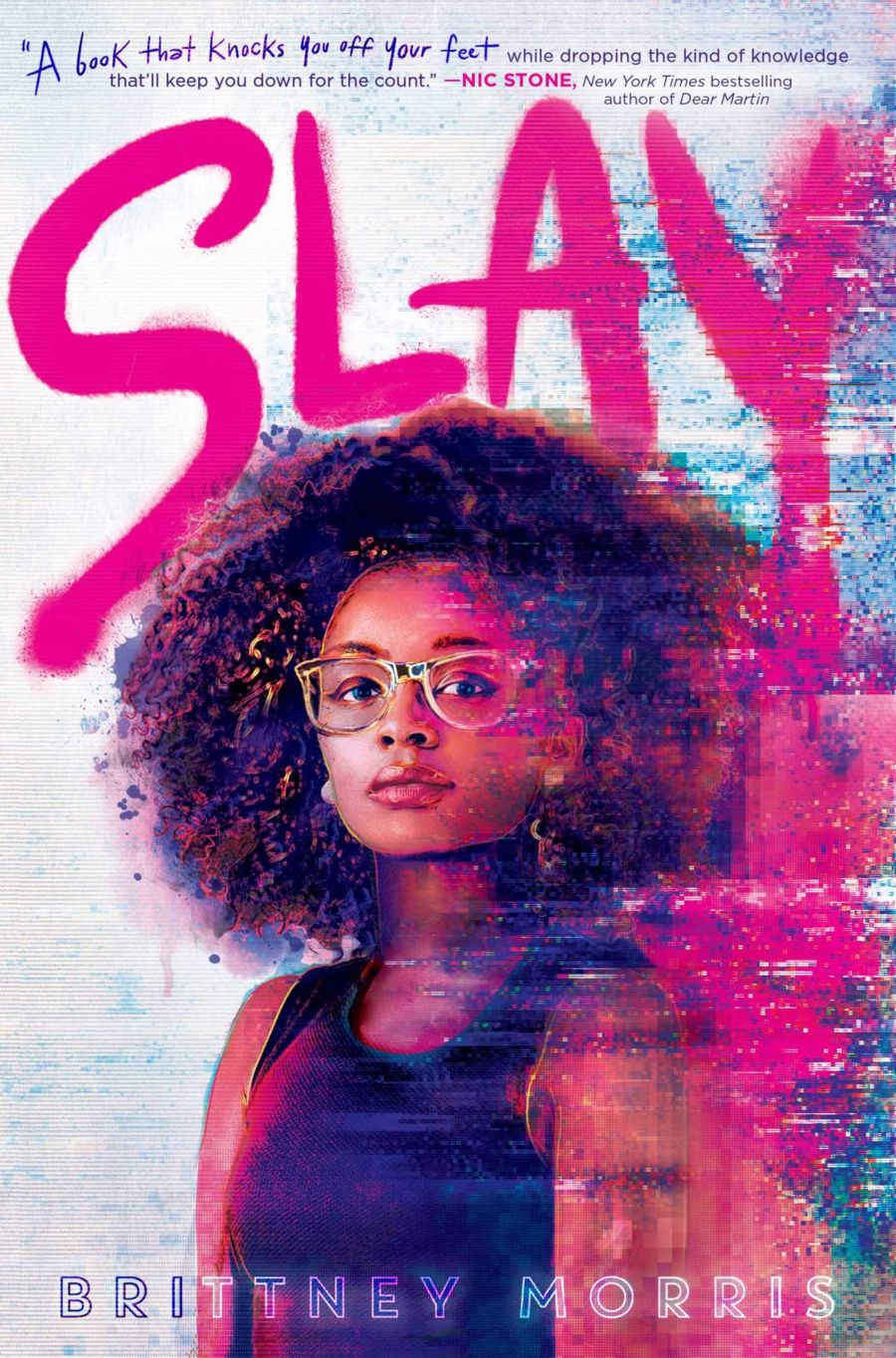