As we await Sherlock season 5, we’ve compiled a case-book of the original Sherlockian adventures that have yet to be reimagined in the TV series thus far.

We can’t help but daydream about modern retellings of the original adventures, memoirs, and cases of Sherlock Holmes that Sherlock season 5 could bring into the 21st century. But when will the series air?

Although a fifth season of Sherlock is nothing more than a hope and a dream right now, what with both Benedict Cumberbatch and Martin Freeman being busy with other productions, many are wondering about the season 5 air date. Currently, no release date has been shared by the cast or crew. The series has always been a back-burner series, meaning that it heads into production when everyone is free. As the stars’ careers continue to grow, the pace at which new seasons are filmed seems to slow down.

When Sherlock season 5 does air, what should it focus on? While Steven Moffat, Mark Gattis, and Stephen Thompson have mostly taken bits and pieces from Sir Arthur Conan Doyle’s original adventures of Sherlock Holmes and artfully mashed them together to make their series, there are still many cases that haven’t been alluded to or mentioned in the popular BBC show. Or, if they have been mentioned in the series, there are still amazing leftover bits that could make an appearance in Sherlock season 5.

Sherlock Holmes is one of the most famous literary characters ever written, despite Sir Arthur Conan Doyle’s reluctance to continue to write about his beloved main character by effectively killing him in The Final Problem, only to return to writing about Sherlock years later due to public uproar about the death of their fictional hero.

When Sir Arthur Conan Doyle brought Sherlock back in The Hound of the Baskervilles, though, it was a previous case that John Watson wrote about. Upon Sherlock Holmes’ actual return, Sir Arthur Conan Doyle actually wrote more stories in the resurgence than he had before originally deciding end Holmes and Watson’s adventures with Holmes’ retirement in the country.

Sir Arthur Conan Doyle wrote the original Sherlock Holmes cases out of order, making Sherlock’s return from the dead both easily explainable and circumvented by writing about cases that happened prior to his trip to Reichenbach Falls. Sherlock returned after years of alluding Colonel Sebastian Moran in The Empty House, which Sherlock alluded to in the episode The Empty Hearse by Sherlock returning to London, though that is one of the sole similarities between the two. 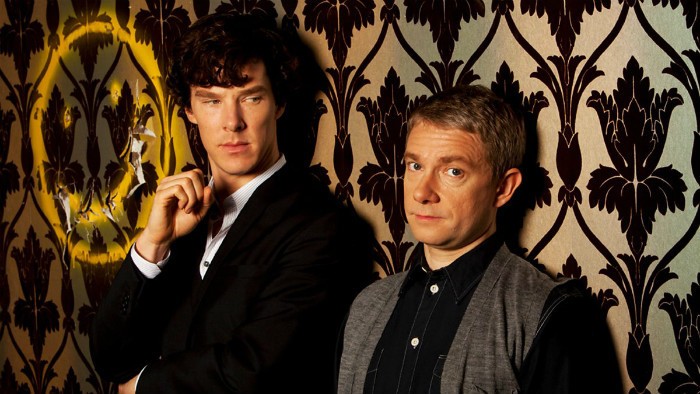 Some of the episodes of Sherlock, which last aired in early 2017, only allude to actual cases, or are quaint play on words to original titles of Sherlock’s adventures, such as The Last Vow alludes to The Last Bow but has nothing to do with the actual case at all, instead it contains plots elements from The Adventures of Charles Augustus Milverton and The Man with the Twisted Lip.

While mixing and matching different plot elements from the original cases to fit modern times makes sense in some ways, I wish they’d saved some titles of the episodes themselves to match the actual plotlines of the original cases. The Last Bow is one of the most important cases, with Sherlock coming out of retirement in order to break a German code during WWI and effectively becoming an even bigger hero in the eyes of his readers during a time of turmoil in Europe, and it could easily be reimagined into something just as poignant today as it was in 1917.

Most of the references to the original canon in the series can be found in the montage scenes, or characters are named after people from cases written by Sir Arthur Conan Doyle, most of which are just a blip on the screen. While I love a good reference to the original canon, I’ve hopes that if there is a season five of Sherlock we will get more than scraps.

Spoiler warning for the endings of the original works by Sir Arthur Conan Doyle below!

While Sherlock has referenced at least one of the four “locked room” mysteries written by Doyle, there are actually four within the canon. The adventure of The Speckled Band is one of my favorite cases, and I think it would be perfect to be transferred from the Victorian Era to the 21st Century.

It isn’t every day that someone teaches their pet snake to attack, and the result being that Sherlock figuring it out meant the death of the suspect would be an interesting spin in the TV series.

The Resident Patient would work well within the Gatiss and Moffat universe, because Dr. Trevelyan could already be known to Dr. Watson, perhaps a former colleague, and therefore Holmes would be more likely to pick up the case. At first, there’s only a suspicion that something is a miss, until the supposed suicide of Dr. Trevelyan’s live-in patient turns out to be gang related.

The gang could easily be something to do with a potential overall arc of the season.

Wisteria Lodge is one of the longer of the short stories, being made up of two separate parts that would be conducive to the hour and a half length of each episode. It also boasts of the only time in the canon where an Inspector, by the name of Baynes, is as competent as Holmes is.

It would be interesting to see Sherlock be impressed by Inspector Baynes, and how he gave the actual suspect false hope of escape by arresting the wrong person, alieving suspicion.

It would be interesting if The Red Circle was done where it took place at a hostel, since boarding houses aren’t really a thing anymore. Or, to make it even more modern, perhaps an Airbnb could be used.

It would also be intriguing for Lestrade, as a character, to get a little more air time, especially at the end when he assures Emilia that the death of Gorgiano was self defense and how she probably wouldn’t be any formal charges made against her.

Bodies found with the look of horror upon their faces would certainly make for an amazingly eerie cold open for an episode of Sherlock. It also boasts of something that I’d love to see happen on the show: Sherlock accidentally poisoning himself to the point that he passes out and it’s Watson who has to get him to safety before Sherlock dies grotesquely as the bodies that were found.

A nanny who is asked to perform odd tasks, like sitting in a room pretending to laugh, seems not very sinister, but I’d find it immensely interesting for the adventure of The Copper Beeches to make a small appearance in Sherlock, especially if it had to do with false identity or pretending to be someone else without realizing it.

While The Musgrave Ritual has trace elements found within Sherlock already, the reason it made this list is because what wasn’t put into the show itself: the actual mystery of the Musgrave Ritual.

They can reference minor details all they want, but the secrecy of the ritual and finding out how it was used and found was the best part of this short story, so it should somehow be included in the show. How awesome would it be for the Musgrave family secrets to unearthed, the secret passageways found by both Sherlock Holmes and John Watson.

The Three Students would be the perfect side case along with a bigger one that could take up most of an episode.The Three Students is probably one of the easiest cases that could be moved from Victorian London to present day, it having to do with teens cheating on tests, which most definitely isn’t only a modern issue.

The Valley of Fear

While The Valley of Fear was referenced in the episode The Blind Banker by featuring a secret society, I’d like to see one of the best cases highlighted more on the show.

It would be interesting for Sherlock and John to uncover a mystery that more closely resembles The Valley of Fear, especially the aspect of the inclusion of the Pinkertons and the backstory of Cecil Barker. The Valley of Fear isn’t the only short story that mentions the Pinkertons, but the twist in this one I definitely hadn’t seen coming.

As I said before, while there is an episode title reference of The Last Bow, it would be an amazing final episode of Sherlock if it somehow went forward in time, since the original canon took place over decades. The importance of Sherlock Holmes circumventing the Germans via cracking their code amidst the first World War was a beacon of hope to the people of England, and a proper send off that simulated this actual final problem would not only be topical, but would give everyone hope in a time of crisis that we so desperately need to see in our daily forms of escapism.

Don’t worry, because Sherlock Holmes can save us, just as he and his stories have done since 1887.