We use cookies to ensure that we give you the best experience on Hypable. If you continue to visit us, we will assume that you are happy with it.
9:30 pm EDT, March 24, 2019

‘Shazam!’ movie review: This DCEU film is everything you want in a superhero movie

It’s basically impossible for me to give an objective review of a DCEU film.

The DC heroes have been such a part of my childhood, and my comics collection skews so heavily DC even as an adult, that the objective quality of any fictionalized work using these characters is hard to tease apart from my own feelings of childhood nostalgia and deeply held personal preferences.

I’ve always been transparent about this when writing reviews of DC films — making sure to immediately call attention to this inherent bias and the limitations of it. And even while I’ve fully acknowledged my bias for DC, I’ve also tried to put myself in the shoes of a viewer who is less sympathetic to these DC heroes so that I can point out parts of these films that may not necessarily work or appeal to viewers who aren’t me.

The appeal of the DCEU is that — at its best — it lets the directors take control of their own movies, giving us films with the director’s unique vision and creative fingerprints all over it. It’s a studio that — again, at its best — allows its storytelling to be ambitious, to swing for the fences, to be just as much about the ideas as it is the characters.

That’s not an approach to superhero storytelling that appeals to everyone, and whatever I personally think about that attitude, I also have to recognize that it exists in a very real and widespread way.

So while I’ve always recommended watching DCEU movies, I’ve also tended to recommend them with an added caveat for those who either perceive themselves as completely objective viewers of comic book movies (a concept I — more or less — don’t think really exists) or trend towards the MCU side of things.

Which means that I believe those less biased than I am will still find Aquaman to be a good time — if they make sure to fully embrace its embrace of its own absurdity. More “objective” viewers of Man of Steel should see it as a great origin story — if they’re ready for a more grounded take on the character, while Batman V Superman is absolutely a god-tier comic book movie — if viewers are open to taking their superheroes more seriously.

Where Shazam rates on my own personal rankings as compared to those films will take a few more showings, but I will say this about it:

Shazam! — like Wonder Woman — is a film that I feel like I can recommend to the general public without any caveats, except for maybe: Shazam! is a great movie, unless you’re too much of a grumpy adult to enjoy superhero movies. 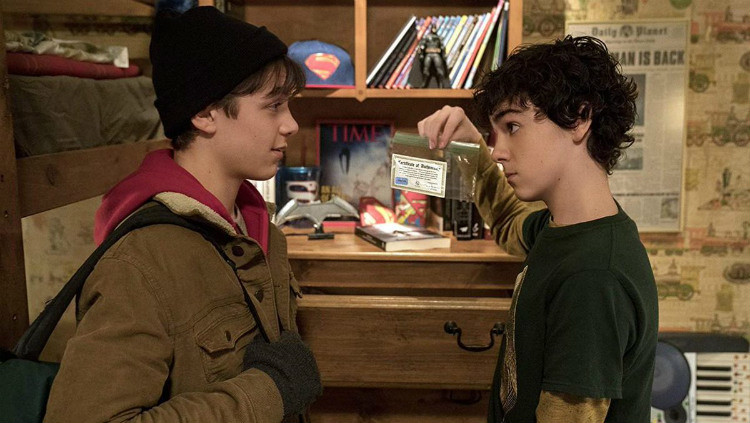 If you’re unfamiliar with the character of Shazam, don’t worry — the movie Shazam! assumes that you and the vast majority of the moviegoing population have no idea who this rather obscure member of the DC pantheon of heroes is and gives us a handy history lesson on the entire whimsical, magical, campy and sometimes absurd world.

The cliffnotes version of the movie, though, is this: Billy Batson is a 14 year old foster kid who, after chatting it up with a dying wizard, can transform into an adult superhero version of himself with varying superpowers by saying the word ‘Shazam!’ As he is 14 in an adult body, of course there are plenty of shenanigans.

And if the movie was just one fantastic Big homage or filled solely Freaky Friday-esque set-ups, it’d still be a good movie. Getting to see the glee on Shazam (played by Zachary Levi) and Freddy’s (played by Jack Dylan Grazer) faces as they realize adult Billy/Shazam can shoot lightning from his fingertips, has super strength, exhibits super speed or, you know, can enter a strip club is both incredibly fun and incredibly hilarious.

In fact, there were some parts of the movie where me and everyone around me were laughing so hard that I actually didn’t quite catch the next scene or two (which is fine — it gives me just another good reason to go see the movie again on opening day). 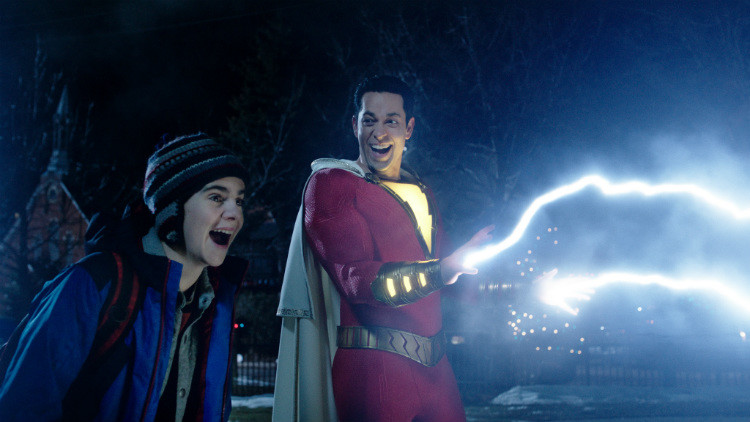 A lot of this has to do with Zachary Levi and Jack Dylan Grazer, both individually and in their shared dynamic. I never watched more than an episode or two of Chuck, but I’ve seen enough interviews and clips of Zachary Levi to know what a perfect fit he is to play the role of a teenager in an adult body.

He completely commits to this role, playing Shazam first with wide eyed excitement, then a kind of smarmy, teenage bravado and, lastly, the steely, somewhat snarky resolve of a young superhero.

Jack Dylan Grazer was a standout of each of the trailers and clips that were released, and that theme continues on into the movie. He’s the best part of every scene that he’s in, and his Freddy such an earnest, endearing, weird little geek that I have absolutely no doubt he’d be one of my favorites were he a student in one of my classes.

He does a fantastic job playing a kid who grew up with superheroes and idolizes them, someone who’s learned to be comfortable with what he knows and honest about who he is — but who also desperately wishes to be something and someone more.

The dynamic between him and Zachary Levi — both the hilarious and heartfelt — provided some of the best individual character moments of the movie, and I honestly wouldn’t mind having a miniseries that’s just all about Freddy following Shazam around and uploading their superhero exploits to youtube.

It’s already my favorite TV show in my mind. 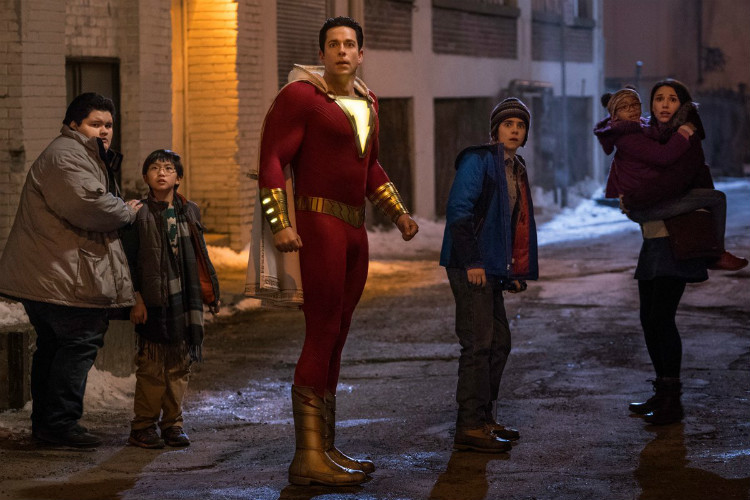 However, as fun and funny as this movie is (and I really want to stress just how incredibly hilarious and joyful it is), it also doesn’t just rely on laughs or gags as its only source of quality storytelling.

Rather than simply being a fluffy, popcorn movie, Shazam is actually a heartfelt narrative about family — what it is, who it is and how we get to choose it — with a layer of superhero storytelling laid on top of it.

As is tradition within these DCEU films, there is a story of motherhood and family running throughout this tale of superpowers and supervillains.

Asher Angel gives us steady, solid and emotional work here as Billy Batson, a rough around the edges foster kid whose search for his mother dictates his every motivation and decision. You see, he literally lost sight of her in a carnival as a child, and has spent his childhood looking for her — a commitment his social worker tells him hasn’t been reciprocal.

And because he’s spent his entire childhood looking away from the people around him and looking around for his mother, he’s never opened himself up to the possibility of family or its importance.

He’s self-reliant to a fault, eschewing personal connections and driven by the idea that if he could only attain what has always been beyond his reach, something will click and he’ll finally be at peace. 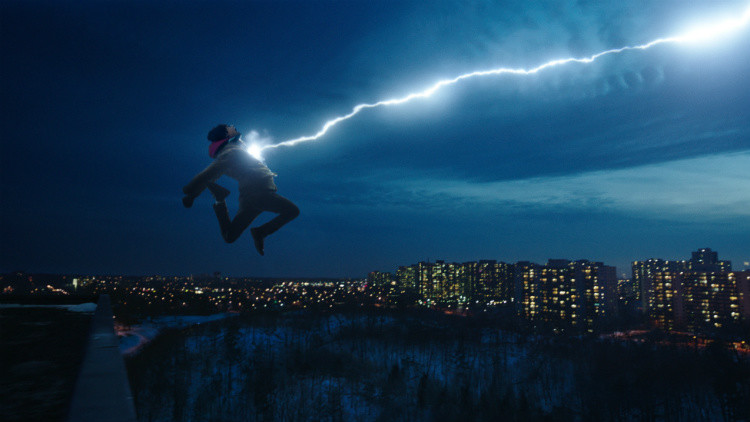 It’s pretty heavy stuff for a superhero film, especially one that’s arguably the most family-friendly of all of DC’s offerings.

And while it’s not as overtly ambitious or grand in scale or singular in vision as other DCEU films requiring caveats, what makes it unique is how deftly it manages to balance its deep belly laughs and almost sitcom-esque set-ups with its superhero grudge matches and legitimately scary scenes, all while wearing its heart on its sleeve and drawing a tear to your eye in the process.

This is a movie that doesn’t shy away from the responsibility of being a superhero, but also revels in the joy and excitement of it — just like any thoughtful 14 year old might.

And perhaps that’s what I liked so much about Shazam — the way in which it took both superheroes and teenagers seriously and didn’t patronize either.

I loved the fact that I would be glad to show it to the middle school students whom I teach everyday and feel confident that not only would they like it, not only would they laugh at the jokes and scream at horror and probably shout Shazam! enough times in class that it’d make me regret showing to them in the first place, but that they’d also leave the movie with something to think about.

They’d leave this movie recognizing the power of loving yourself enough to let other people in, the importance of caring for your family — whether it be the one you were born into or the one you chose — and recognizing that there is greatness within us all, even if we can’t quite see or understand it at first.

So take yourself, your friends, your loved ones and your kids to see Shazam. You’ll laugh, you’ll cry, you’ll probably cover your mouth in shock once or twice and want to whoop loudly a couple more (a few people in my theater certainly did — I may or may not have been one of them).

Most of all, you’ll be thankful for the people who have loved you and who’ve made you feel like you’re a champion, in your own way.

‘Shazam!’ is out in theaters everywhere April 5!