Netflix’s Sex Education justifies a second season in early episodes but doesn’t deliver the complete package that season 1 did.

When Sex Education landed on Netflix in January of 2019, I watched the entire season over a weekend. At the time, I wrote (in my official Twitter review) that it “felt like reading a really good book, something that I haven’t gotten from a show in a while.” But when the credits rolled on the final episode, I did not feel the aching need to return to the series, nor did I ever think that it would get renewed.

But Netflix has seemingly endless money and the algorithm worked in this series’ favor, which is why one year later, I find myself having returned to the slightly off kilter universe of Sex Education where every decade is in fashion and it apparently never rains.

It’s not quite fair to say that Sex Education suffers from the woes of a sophomore slump. Efforts to make characters justify their role in the world fall short at the cost of pushing some of the more interesting ancillary characters to the sidelines. And while I would love nothing more than to have every single scene populated by Gillian Anderson, there are several adults pulling focus in season 2 to both the benefit and detriment of the flow of the season. 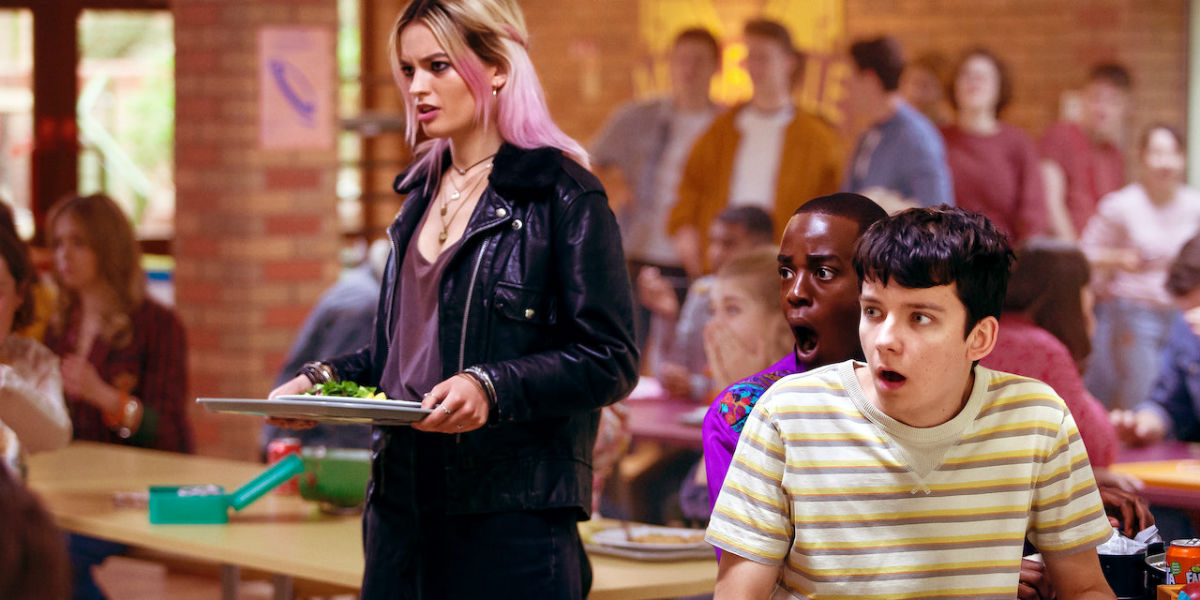 Sex Education is at its core a high school drama. It relies on the ever-changing mood swings of teenagers prohibiting them from discovering how they feel about themselves, the world, and those around them. It’s full of identity crises, trust issues, and of course, the consequences of trying to sort out how to handle all of the hormones raging inside these bodies.

Otis (Asa Butterfield) returns in a much more favorable light for season 2, thanks in large part to his reconciled relationship with Eric. In instances where you would expect to see the Otis of season 1 rear his ugly head, instead there are moments where we see the lead actually listen and take in the concerns of his best friend.

Demand is high for his Charlie Bartlett-style clinic as an outbreak of chlamydia has caused more hysteria due to misinformation than actual STDs. And while Eric tries to corral the lost sheep of the student body, it is ultimately Maeve’s return that sets the season on course. Maeve’s home life continues to come into conflict with her progress personally and in school, but luckily there are some adults on the lookout for her wellbeing.

The importance of finding and keeping a safe space, be it in the abandoned restrooms on the outskirts of campus, in the classroom of a quiz team practice, with a partner in study hall, or the privacy of one’s bedroom, is the crux of season 2’s opening run of episodes. The people who populate those places become just as important as the season moves forward.

Balancing home and school life become of paramount importance for all the characters as it was in season 1.

Checking in on the star athlete Jackson, reminds everyone that the golden boy never quite feels that way even when there is a medal around his neck and his mothers are smiling. Jackson’s story sets up one of the more interesting, yet albeit cliché story, of what would happen if the thing that was making every aspect of your life miserable was taken away. What is the backup plan? Would it solve all the brewing troubles at home? Luckily, Sex Education has the charismatic Kedar Williams-Stirling offering another stellar performance (in more ways than one) to elevate the tried and true plot.

Other areas of the story should have remained buried and forgotten.

The return of Adam Groff, son of the headmaster of Moordale and tormentor of Eric, is perhaps the most distracting and unfortunate avenue the show takes. And remember, this is a show where Gillian Anderson talks about ghost fetishes (a dream for some X-Files fans).

As Alan Sepinwall points out in his review over at RollingStone, the legwork required to justify Adam being a character worth exploring relies more on people liking him as a match for Eric, rather than doing the work to make him a redeemable character. In the premiere episode, Eric walks into Groff’s office to ask when Adam will return. The answer — never, he will never torment you again — should give Eric some relief. Instead, he seems a bit pained by the response.

Adam’s actions in season 1 were coded by his unsortable feelings of jealousy, rage, and attraction, which he took out on Eric, both physically and emotionally. When he kissed Eric before getting kicked out of school and booted off to a military academy, Eric tried to extend whatever shred of compassion he had left for this boy in his direction.

But Adam went away, Eric is free to go about his life as his true authentic self with an arguably less selfish Otis than we saw in season 1. Unfortunately, Sex Education selected the easiest roadblock to throw in Eric’s story arc for season 2 and brought back Adam, which in turn brought back in a whole slew of familial drama that comes with that. Groff Sr. could have been just the man running around with his head on fire over chlamydia outbreaks and a failing status with the school board.

The series does find pockets of space to introduce some great content for the series’ strongest sidekicks including Lily (Tanya Reynolds), who steps into the limelight as director of the school play and all-around voice of reason. Same goes for Ola (Patricia Allison) whose turn as Otis’ girlfriend provides the perfect platform for even more cringeworthy explorations of consensual sex. And Viv, played by Chinenye Ezeudu, may be my favorite character surprise this season.

If you liked the first season, the second will leave you almost as satisfied.