We use cookies to ensure that we give you the best experience on Hypable. If you continue to visit us, we will assume that you are happy with it.
8:30 pm EDT, July 21, 2019

SDCC: 12 hilarious ‘What We Do in the Shadows’ reveals from the panel

The iconic comedy team behind FX’s What We Do in the Shadows stopped by SDCC to talk about the show.

Years after the cult classic What We Do in the Shadows movie, starring Taika Waititi and Jemaine Clement, introduced the world to the untapped haven of vampire mockumentaries, their FX show by the same name is bringing the concept to new, delighted audiences.

Some of the show’s biggest fans gathered together at SDCC to see the cast and creative team talk about What We Do in the Shadows season 1, and even tease a little bit of what’s to come in season 2.

Anytime Taika and Jemaine are in a room together it’s a safe bet that everybody will be laughing, and they didn’t disappoint at the What We Do in the Shadows panel. They were cracking jokes with each other and the rest of the panelists from start to finish, which made for one of the most fun panels at SDCC in 2019.

As an added bonus, the panel was moderated by Evan Rachel Wood, who guest starred in “The Trial” episode of What We Do in the Shadows as part of the vampiric council. The panel actually began by airing that episode of the show, which set the mood perfectly for the fun panel.

Production on What We Do in the Shadows season 2 seems to still be in the idea phase, so they didn’t have much to say about it, but they did reveal a lot of hilarious tidbits about season one and the show as a whole. We’ve compiled a list of the funniest reveals from the SDCC panel. Enjoy! 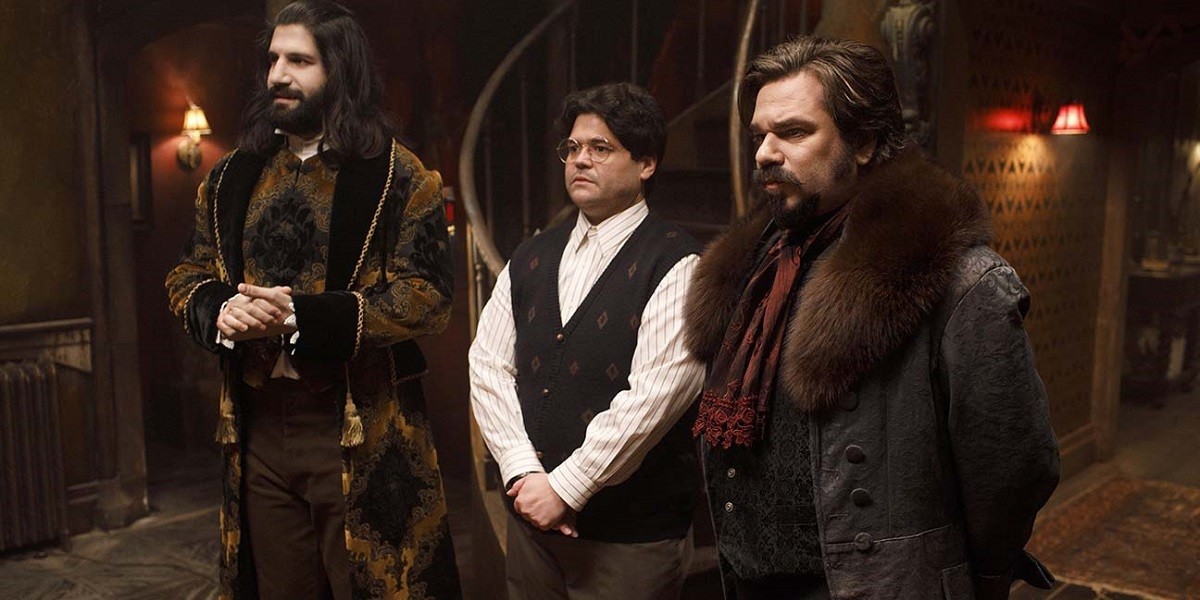 Tilda Swinton deserves some credit for the vampiric council

In “The Trial” episode, many actors and actresses who have played vampires in the past got together to form a vampiric council to determine the fates of Laszlo, Nadja and Nandor after they killed the baron. Jemaine took some credit for this idea, but he also confessed some credit belongs to Tilda Swinton.

The What We Do in the Shadows movie screened at SXSW the same year Tilda Swinton was there with Only Lovers Left Alive. While there, she told the Shadows boys, “we’ve gotta get our vampires together to do something.”

It wasn’t “just an availability thing”

Many former vampire portrayers were called upon to be a part of the vampiric council but weren’t “able to make it,” including Brad Pitt and Kiefr Sutherland. In “The Trial” episode, Taika assures everyone that it was “just an availability thing.” According to Jemaine, it turns out it was less of an “availability thing” and more of a “not available to do things I don’t wanna do” thing.

However, they did hint at another meeting of the vampiric council in What We Do in the Shadows season 2, and Taika was hopeful. “I think those who had availability issues might see this episode and reconsider those availability issues,” he said.

One of the best parts of “The Trial” was the weird dance that the council does when Nandor, Laszlo and Nadja arrive. We figured that the guest stars weren’t involved, but apparently the What We Do in the Shadows movie stars, who were shown in the dance sequence, didn’t do the dance either.

“We just walked through,” Jemaine confessed. “It’s all in the face,” Waititi added. “Dancing is all from here up,” he said, gesturing to his neck upwards.

Jemaine’s interest in vampires was born out of fear

Adorably, Jemaine confessed that he was exposed to vampire movies too early as a child and was terrified of them. “I had nightmares all the time about vampires chasing me,” he said. Fortunately, that evolved into an interest that made him continue watching vampire movies and eventually, making them.

Unsurprisingly, there’s a lot of improv on the show!

It’s always cool to find out that the actors you see on screen are an active part of making the show so funny, and it turns out that’s definitely the case for What We Do in the Shadows. “There’s a lot of improv. Usually it starts out with the actors doing some version of what we’ve written. As long as the actors know what the scene is about, we let them do whatever they want. It’s almost always good,” Paul Simms divulged.

Taika asked if the actors get a writing credit, to which Simms replied, “no, and that’s something I’m very happy about,” jokingly.

People yell ‘bat’ to Matt Berry all the time

One of the funniest things about Laszlo is the fact that he yells “bat” every time he turns into a bat. Apparently, fans have taken to saying that the to him when they recognize him out in the world.

“I didn’t have that before, and now I have it as part of my life. Good on you,” he said, cutely. 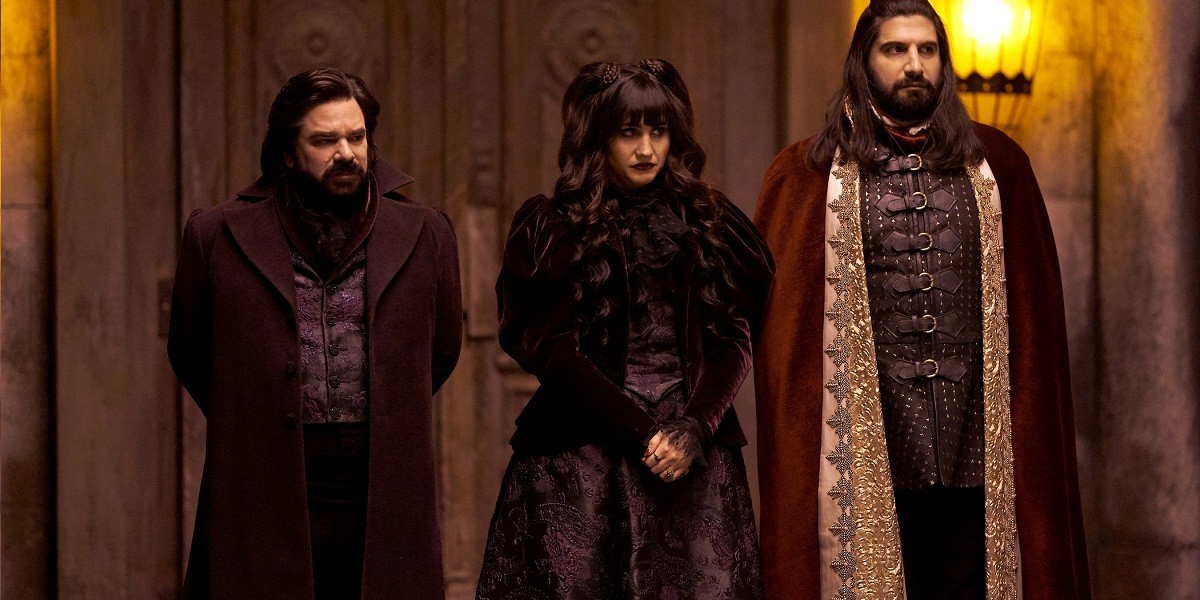 Nadja wasn’t supposed to be the first female vampire

What We Do in the Shadows began with a short film and then evolved into a full length film. Both of those projects only included male vampires.

Natasia Demetriou is definitely the perfect choice to introduce female vampires into the Shadows world, but apparently, there were supposed to be women involved right from the start!

“When we wrote the short film we invited a bunch of our friends and basically, whoever turned up was in the cast, but none of the women turned up,” Jemaine said. “Weird that they didn’t want to turn up to some shitty old flat where some nerdy guys were making a vampire short film,” Taika joked.

Due to the aforementioned “availability,” they couldn’t actually assemble any of the council members at the same time. This led to Taika and Jemaine filling in everyone’s parts for each new actor that showed up.

“We pre-shot a lot of that thing in Toronto without anyone,” Taika said. “We would say the list of people and point to various spots of the room and be like “right Kiefr, right Antonio?”

Wesley Snipes actually had to shoot his part of the scene a month later on the other side of the country, but Taika didn’t want anyone else to play that part!

Energy vampires can turn into geckos

The What We Do in the Shadows panel ended with two deleted scenes. One of these scenes showed Nandor answering more questions for his citizenship interview, and the other one showed Nadja and Laszlo trying time to help Jenna successfully turn into a bat.

While they were discussing it, Colin Robinson showed up and asked if she’d tried turning into a gecko, because apparently that’s what he can do. He even demonstrated it!

Jemaine has been researching vampires for What We Do in the Shadows for so long, he’s become a bit of an expert. “Very often you’d pitch an idea and Jemaine would immediately know if vampires were allowed to do that or not,” Paul Simms said. “You could ask Jemaine anything vampire related,” Stefani Robinson added.

When the cast was asked about their relationships outside of the show, Natasia confessed that she routinely harasses Matt with photos. “I send Matt constant pictures of him on the aging app,” she said.

Nandor’s voice has an interesting inspiration

Kayvan Novak didn’t have to look too far to find inspiration for the voice of Nandor. When Evan Rachel Wood asked him where it came from, he laughed and said, “the film!”