We use cookies to ensure that we give you the best experience on Hypable. If you continue to visit us, we will assume that you are happy with it.
12:30 pm EDT, August 6, 2019

Summer is in full swing and Bangtan celebrates by heading to play some water sports on Run BTS! episode 83, “Summer Outing 1,” which is really a treat for viewers too!

While Bangtan is getting the rundown of what they’ll be doing, they’re interrupted by a loud crow that wants to get its word in too. Since Jimin is apparently the bird whisperer, Hobi asks Jimin to tell it to stop.

So he does and it actually works.

This isn’t even the first time we’ve seen him do something like this on Run BTS! 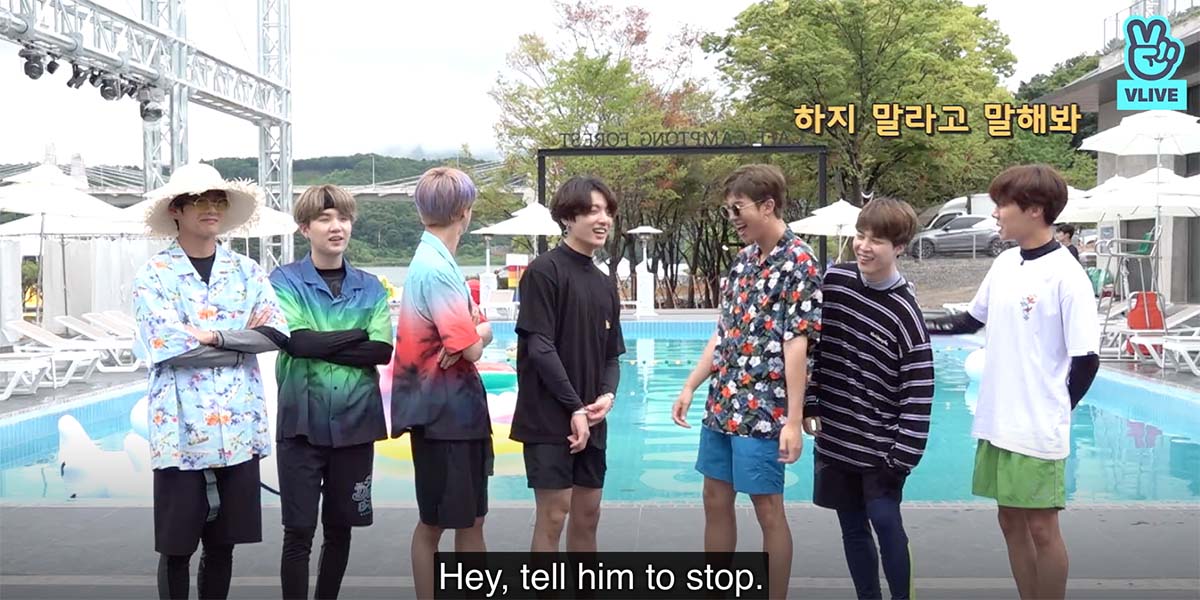 As usual, the guys need to split up into teams, to do so they play a simple game of turn up or down. They just have to keep their hands down or move them up and then group together the people with the same decision.

Jungkook, Jimin, Taehyung, and Yoongi end up on one team against Jin, Namjoon, and Hoseok.

One team is very excited, while the other is…less so.

When it comes time to pick their team names, of course, Team Kim Seokjin comes up again. Jin’s actual team decides to go with something fresh, literally, that’s the name they pick – fresh.

While the maknaes plus Yoongi debate over what they’ll go with. Jungkook wants Team Kim Seokjin, Yoongi wants Toad, but Taehyung gets the last word in and picks muscat.

Bangtan doing warmups before they start to play water polo might be the most chaotic thing they do this entire episode.

Hoseok takes the lead and shows them how to stretch but it’s not long before they’re all acting out. Once they’re each doing their own stretches they lose all control which is always the best thing to watch. 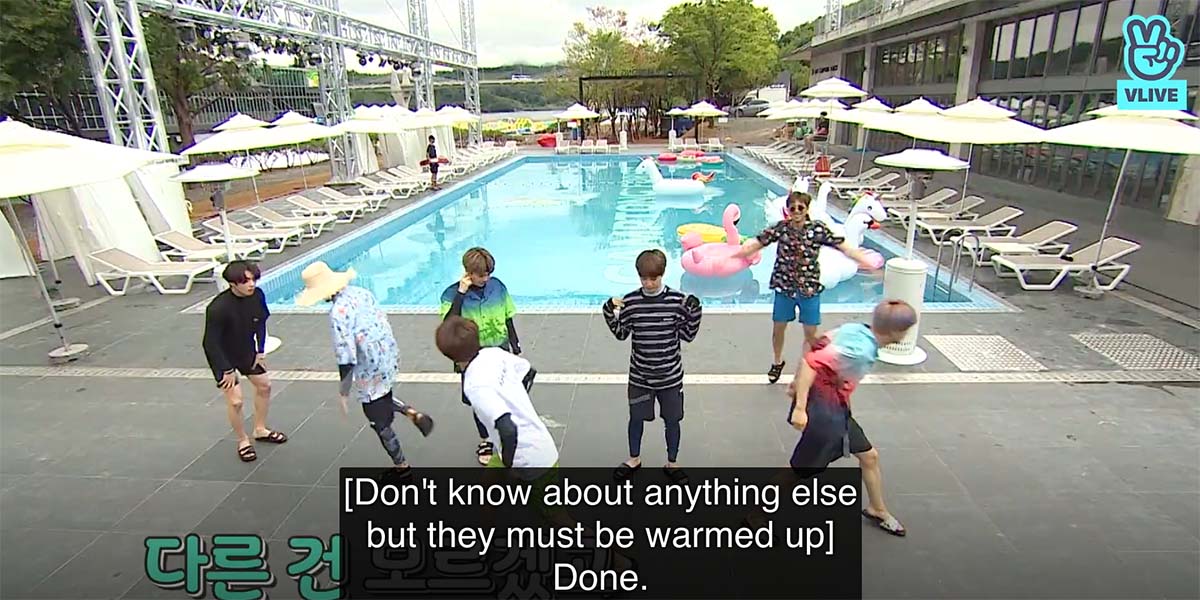 Before they play water polo, everyone has to get into the pool first. The maknaes get ready to jump in together, except that instead of going in Jungkook and Taehyung just launch Jimin into the pool.

And the Run BTS! editors are kind enough to show the little trick on Jimin to us with three different camera angles! 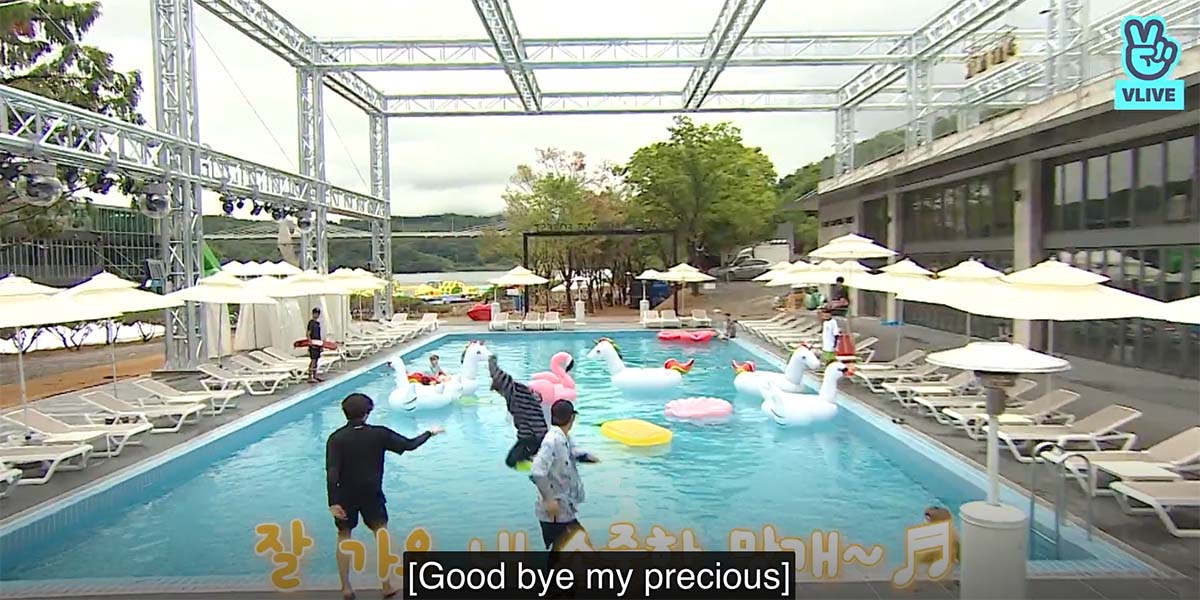 While playing, Jin serves so hard that he bounces the ball off the camera that’s filming from overhead. The best part about this is how much it makes the guys crack up afterwards! 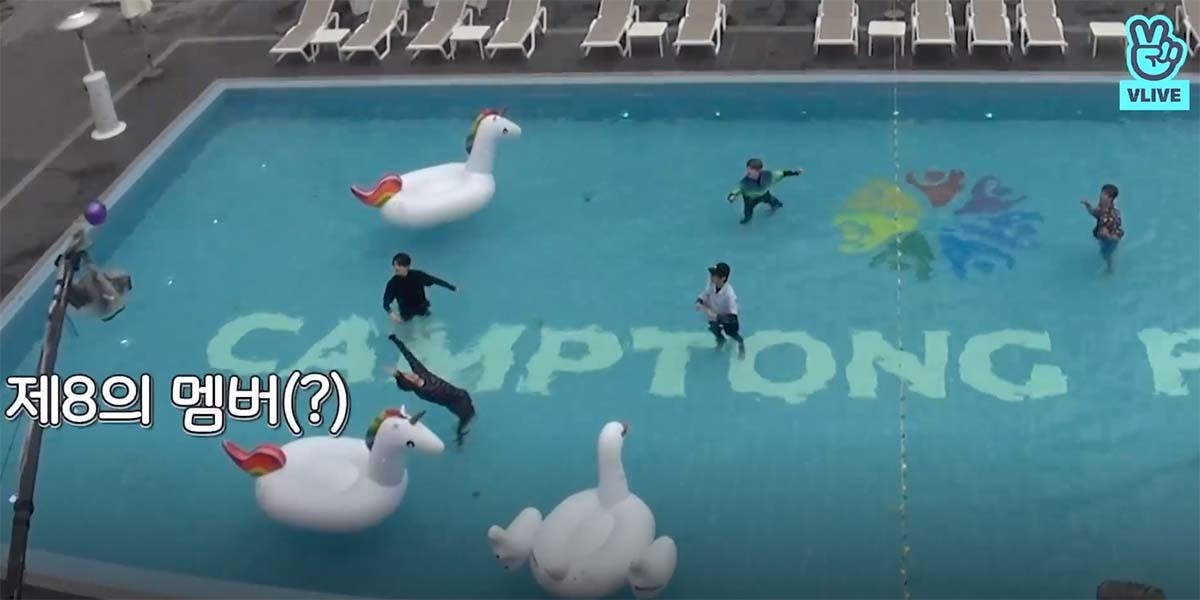 In the middle of the game, Jimin suddenly realizes that he’s the only one that’s fully wet.

It’s kind of funny that he randomly figures it out and is concerned, but he doesn’t get to ask any questions because the others keep the game going. Poor Jiminie.

After successfully playing defense by each hitting the ball once until it was out of their side, team fresh celebrates with enthusiasm.

It’s hilarious because they get so excited for just getting one point, the round isn’t even over yet. 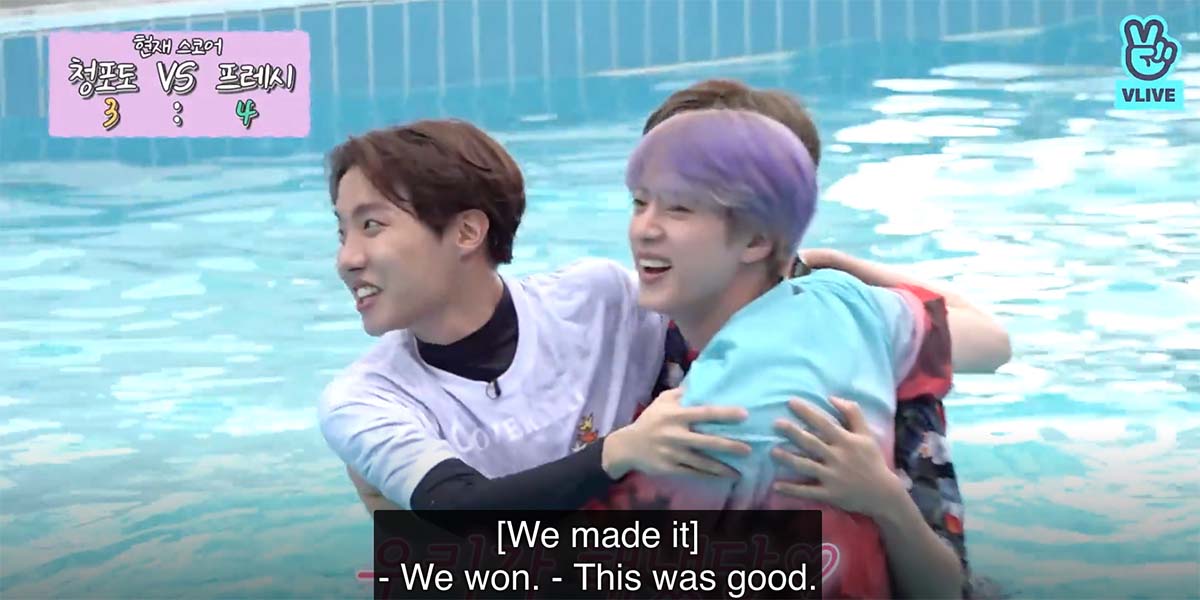 When they finish the first round of the game, it’s time to switch sides. While everyone else just walks to the other side, Yoongi does some adorable swimming with the ball.

Of course, the others can’t help but tease him for going so slowly though. 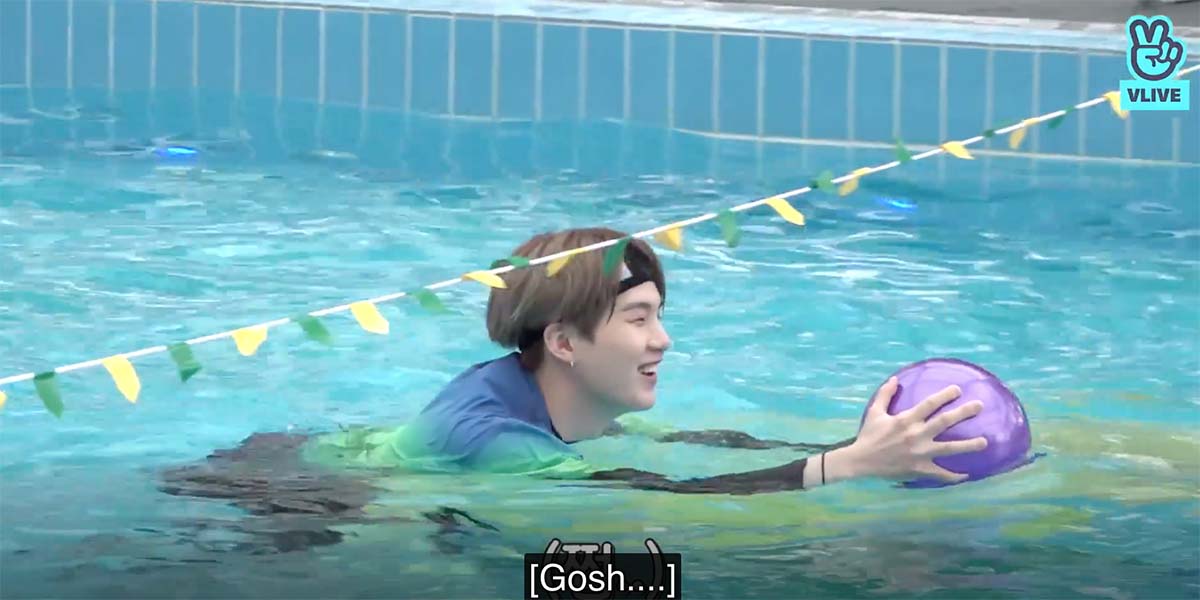 After his teammates pass the ball towards Taehyung he inexplicably tries to kick the ball. It’s so funny to watch that Yoongi, Jimin, and Jungkook aren’t even upset because they’re too busy laughing. 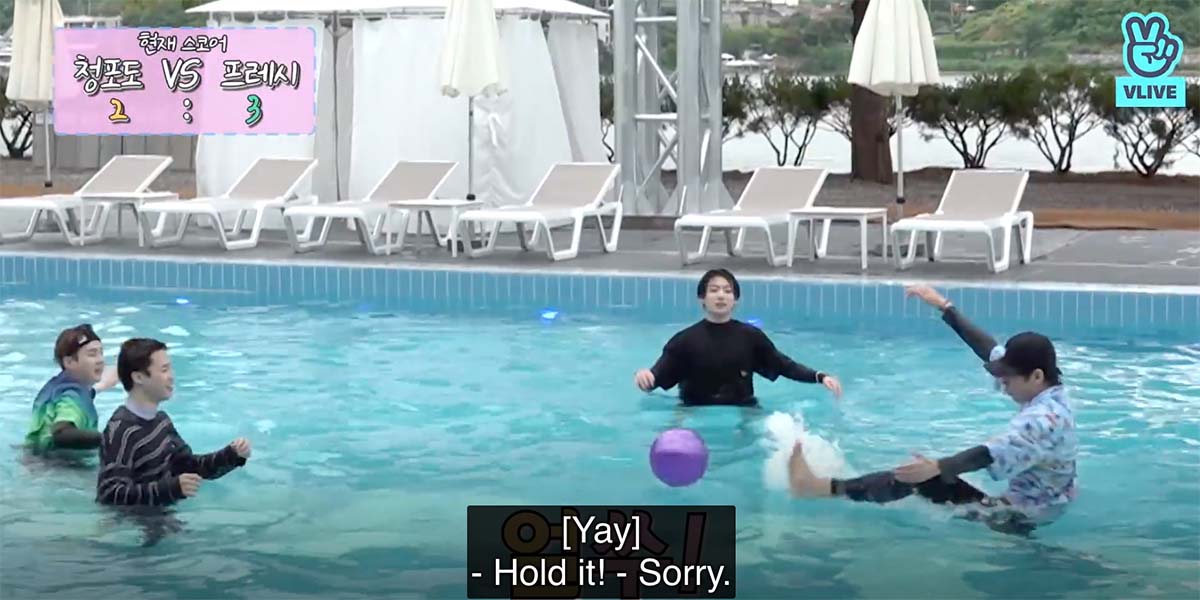 In order to win the last round, Hobi and Namjoon end up hitting the ball together to the other side. It wasn’t planned and kind of confused them, but also made them ridiculously happy to beat the others! 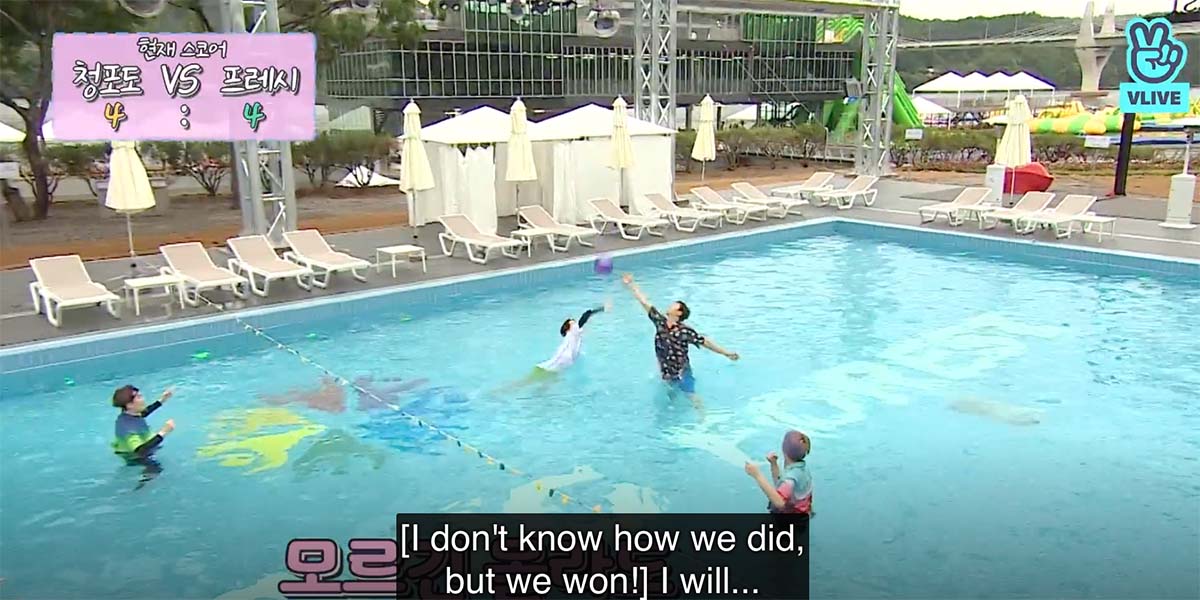 With the game over, they can all get out of the pool now. For some reason they decide to climb out inside of taking the steps.

It’s easy for Jungkook, and less so for Yoongi who tries to follow after him! But maybe his satisfied smile once he’s out is all worth it. 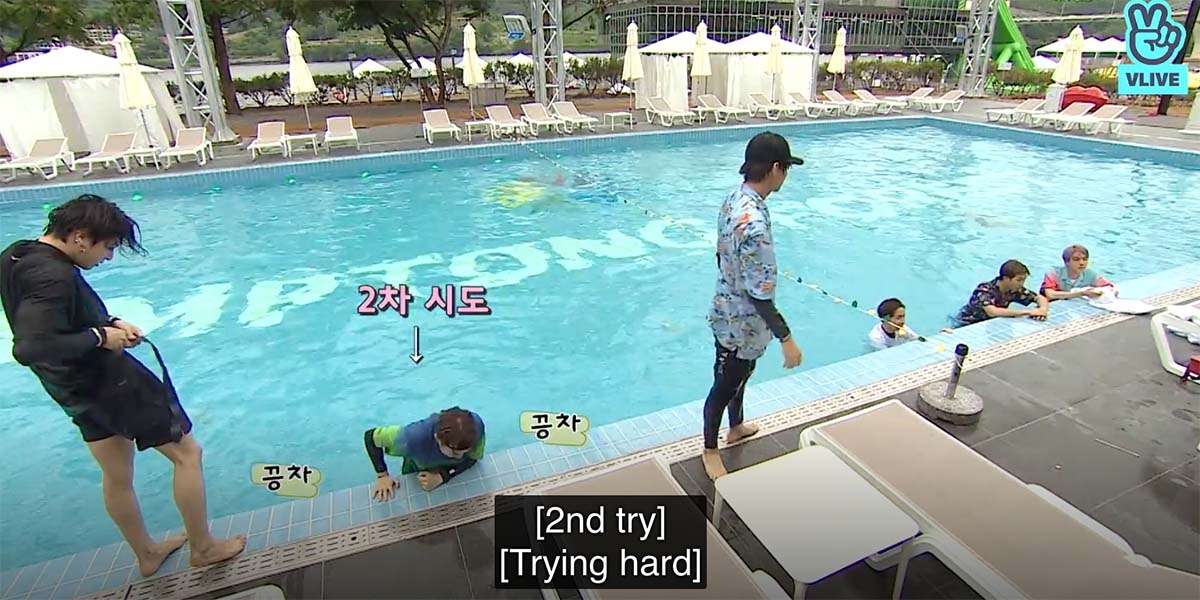 Team fresh wins a game of rock/paper/scissors and decides to go last in the next game. But that means that they have to wait and watch what the others go through.

And it ends up making them even nervous in the end! 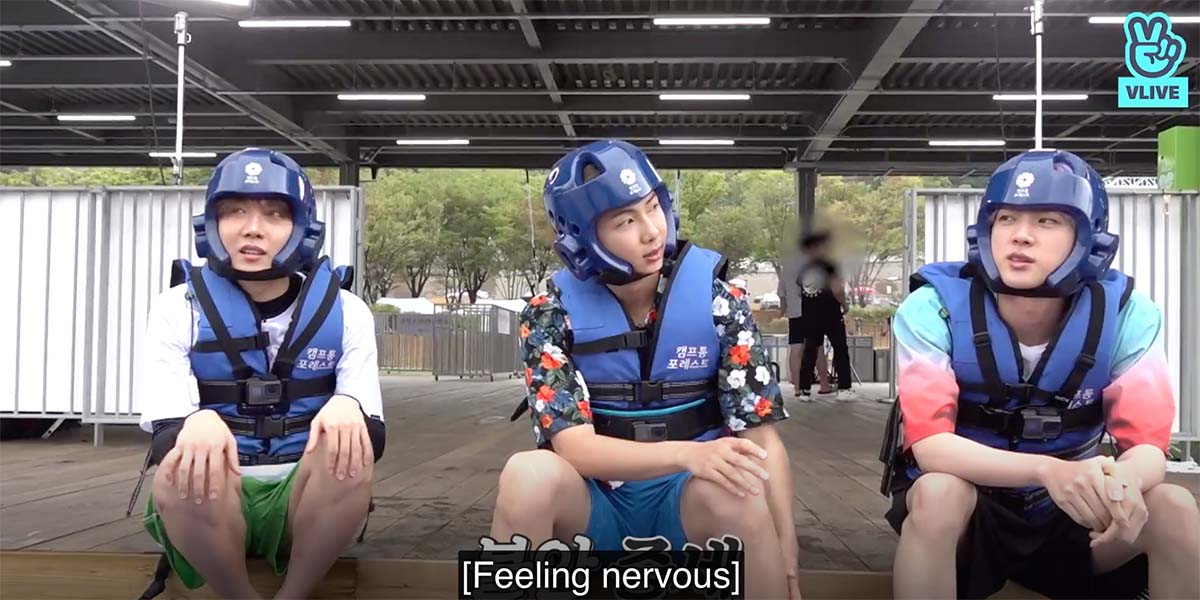 The funniest thing about team Mascots’ turn on the water tube is how much fun everyone has versus Taehyung. While Jungkook, Jimin, and Yoongi seem to like the ride – Taehyung can’t get over how fast they’re going!

He even started to lose his water shoe at one point which just freaked him out more.

Team fresh has a little more of a rocky ride thanks to there only being three of them on the water tube. And Jin even loses his water shoe from the speed at which they’re going.

But luckily for them, they get their answer right on the first try and don’t have to stay out as long as the others. 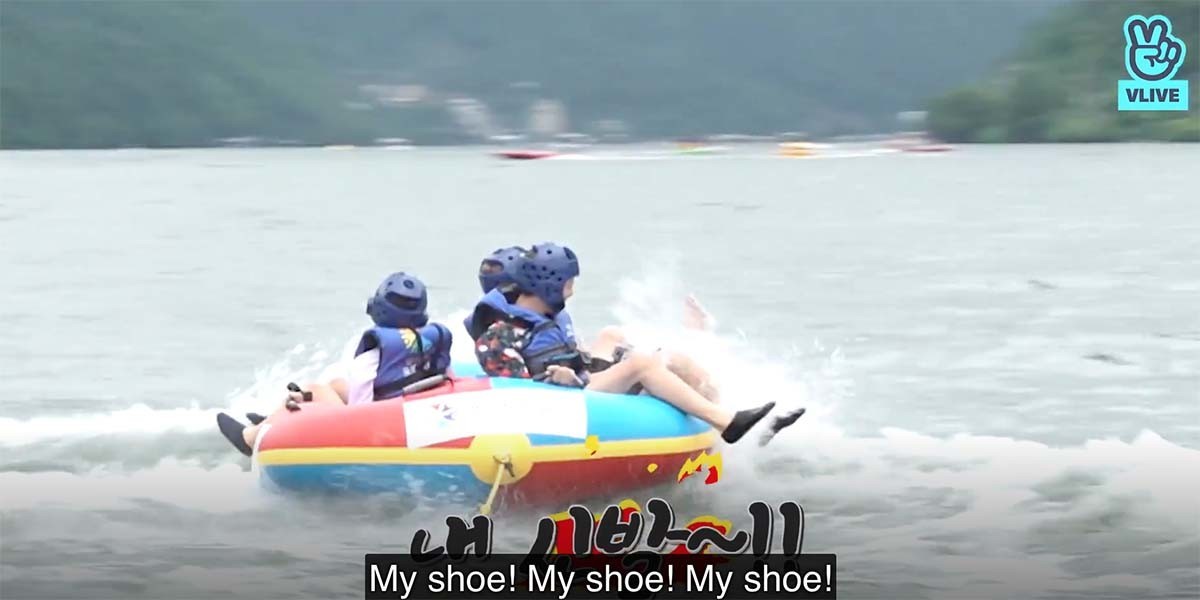 Fans can watch Run BTS! for free on BTS’ official V Live account! Channel + subscribers can also gain access to behind the scenes clips and images.