We use cookies to ensure that we give you the best experience on Hypable. If you continue to visit us, we will assume that you are happy with it.
12:00 pm EST, November 18, 2019

If you know anything about RockLove, you know they produce high-end jewelry for a variety of fandoms. Many of these are in conjunction with Disney and feature pieces representing both princesses and villains.

We’ve previously highlighted RockLove’s Nightmare Before Christmas and Disney villain pieces for Halloween (and beyond!).

Now, we’re looking toward the holiday seasons and the upcoming Frozen 2 release on November 22, 2019. Scroll on to discover more beautiful pieces and to read our behind-the-scenes interview with RockLove designer Allison Cimino! 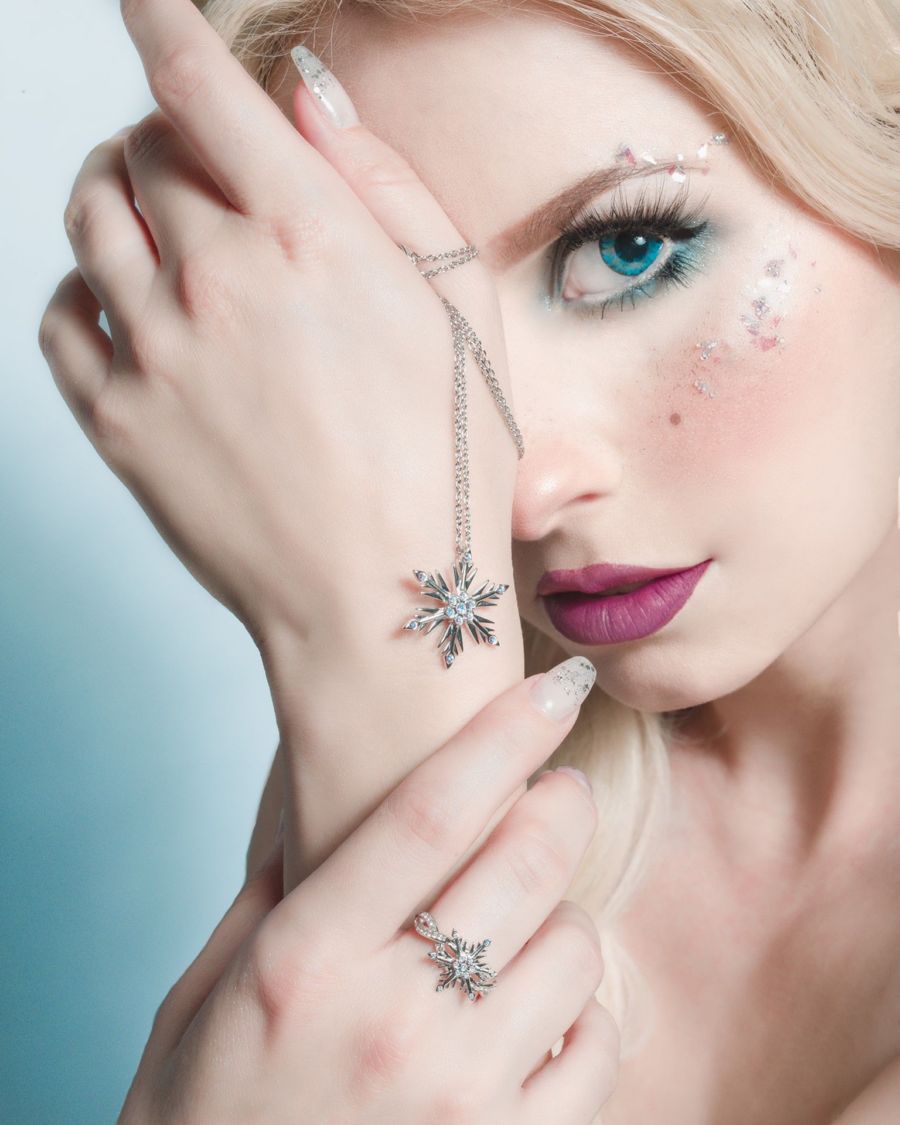 In October, RockLove announced the first two pieces in their Frozen 2 collection, consisting of a matching snowflake necklace and ring. You can see both pieces below. Clicking on their titles will take you to their order page! 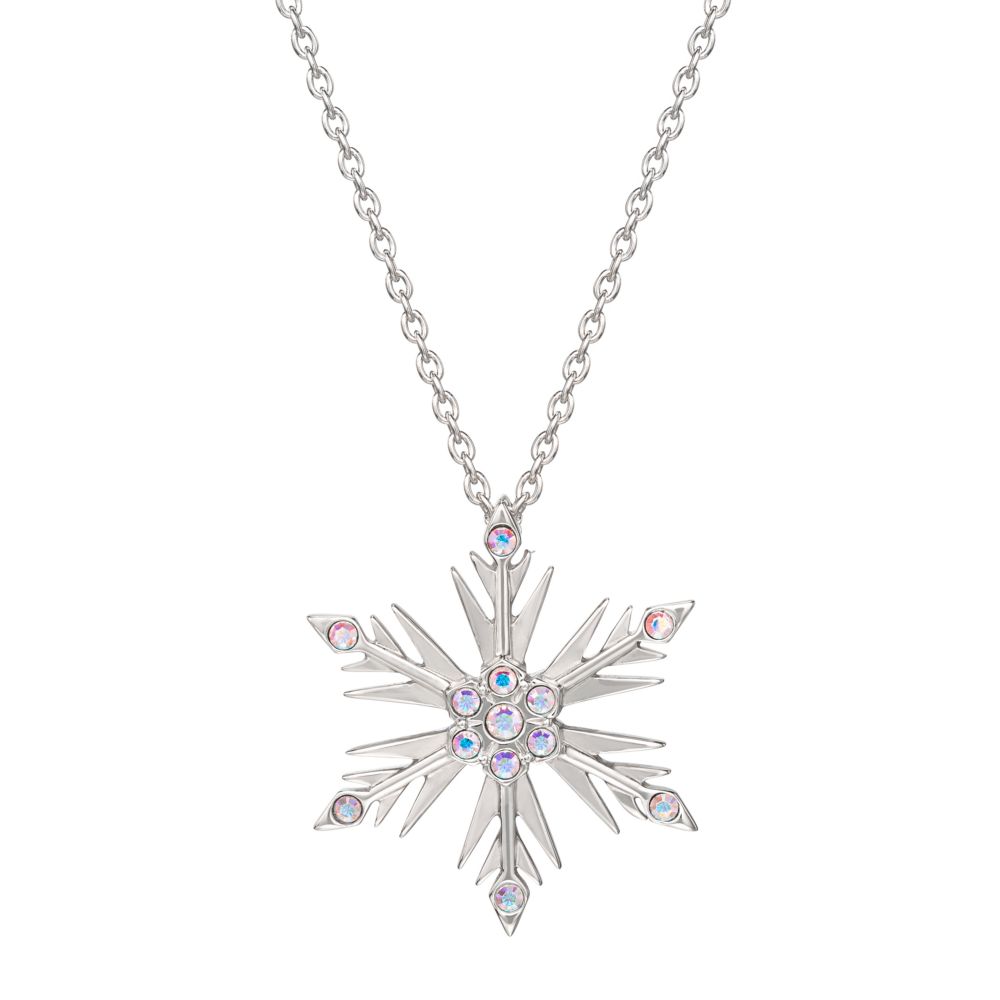 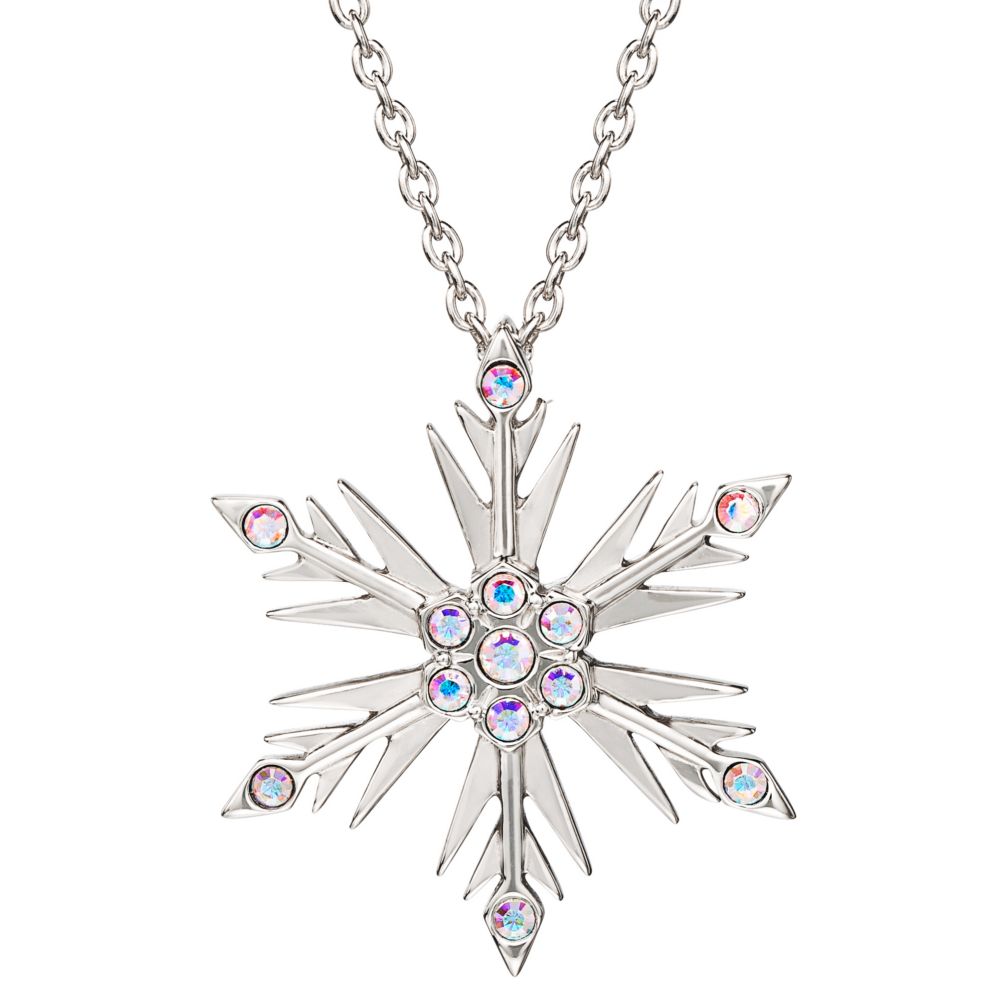 Carved in polished solid sterling silver, the iconic Frozen snowflake is set with luminous Aurora Borealis Crystals. Inspired by the prismatic effects of a flawless ice crystal, the iridescence changes color as the necklace moves — flashing the spectrum of pinks, purples and blues! The elegant pendant hangs from a hidden bail along a sterling silver cable chain. 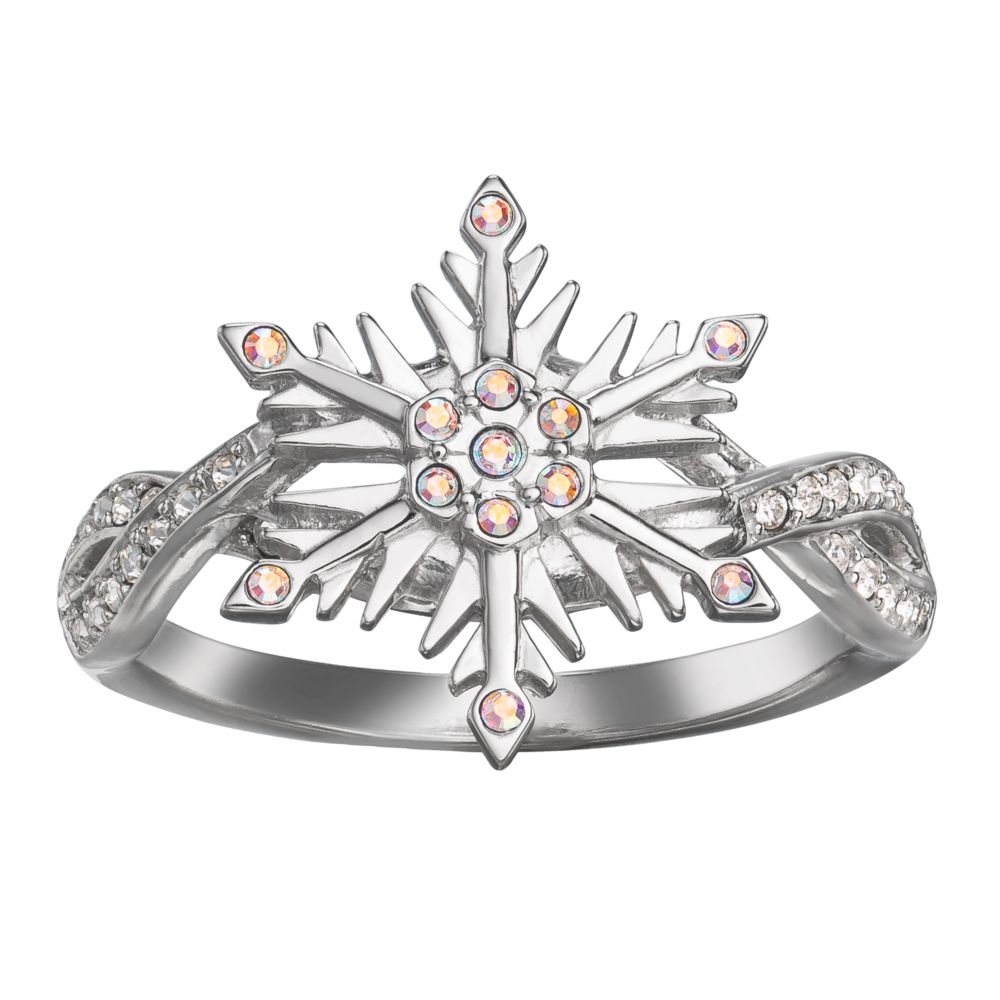 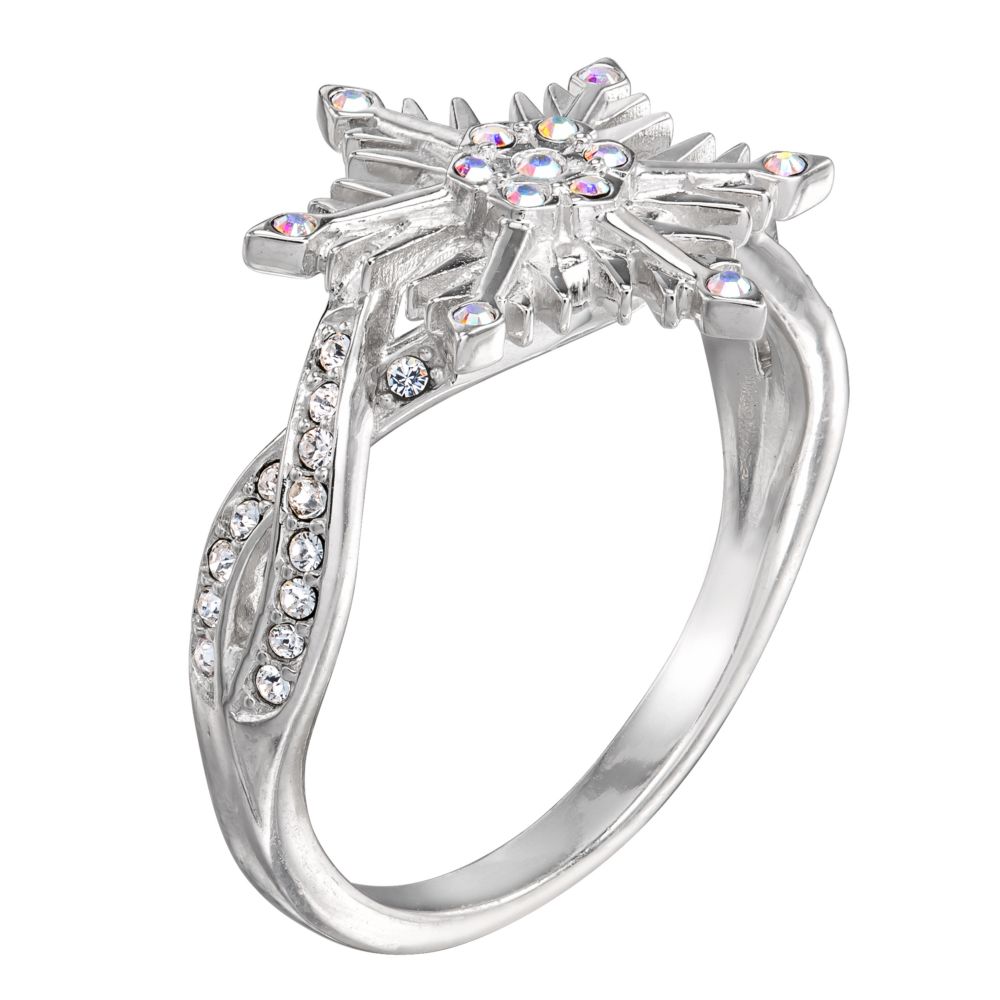 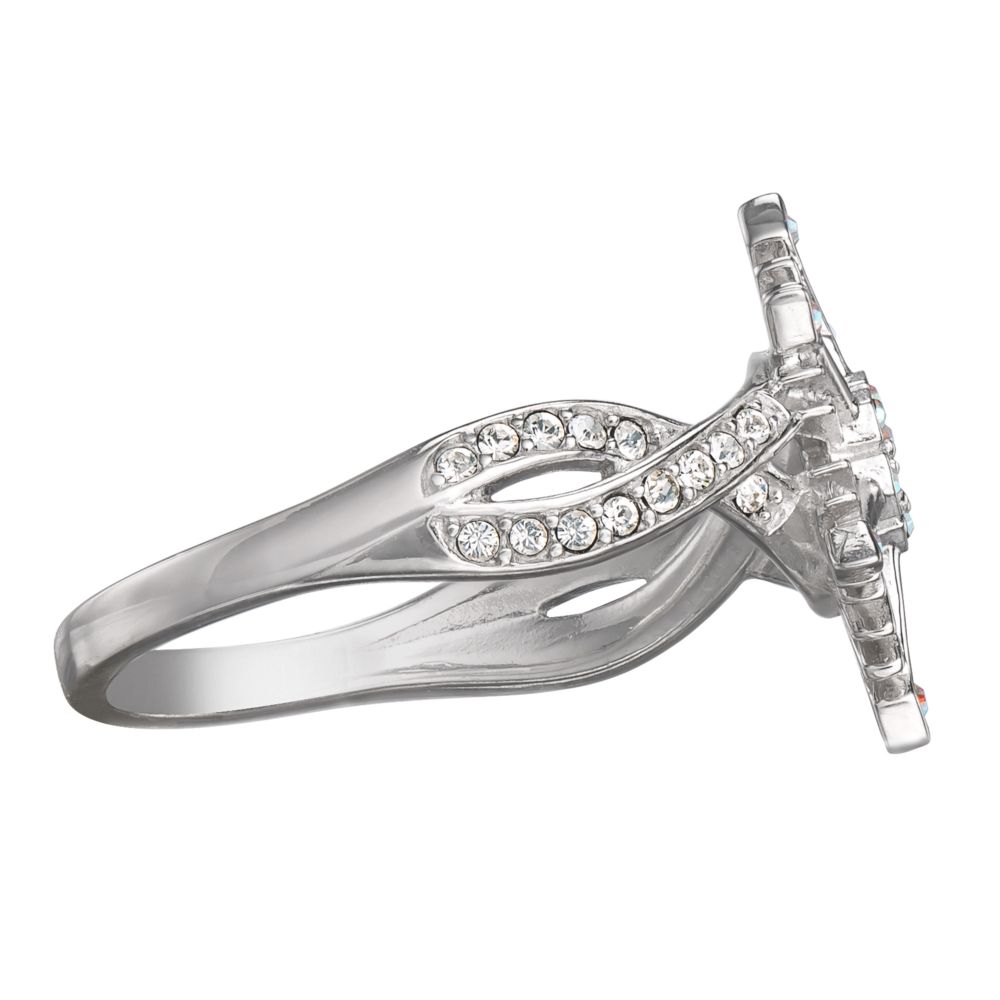 Carved in polished solid sterling silver, the iconic Frozen snowflake is set with luminous Aurora Borealis Crystals. Inspired by the prismatic effects of a flawless ice crystal, the iridescence changes color as the ring moves — flashing the spectrum of pinks, purples and blues! Interlocking swirls of white crystals continue down the sides of the ring band like a snowflake carried along a gust of winter wind.

If you were hoping for more designs to choose from, then you’re in luck! Designer Allison Cimino is introducing eight additional pieces into the RockLove Frozen 2 jewelry line, which we are exclusively revealing below! You’ll be able to order these beginning on November 22. 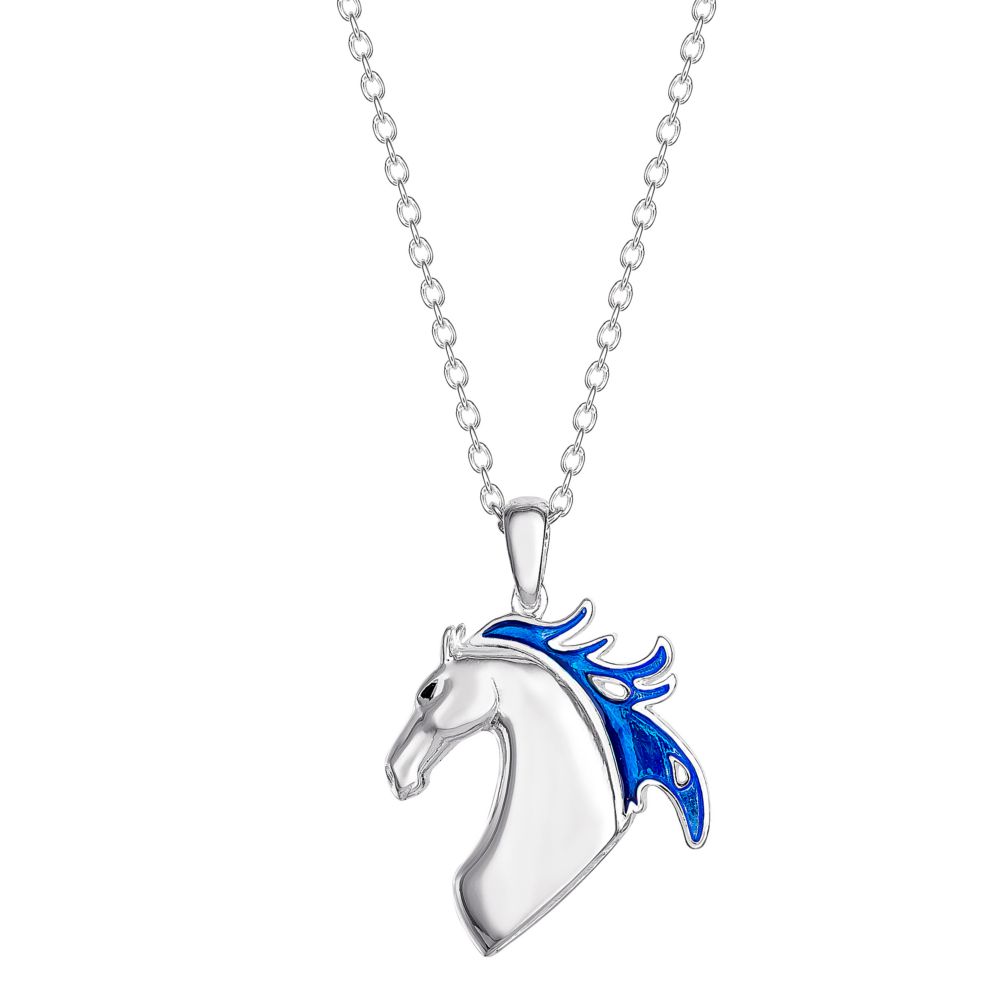 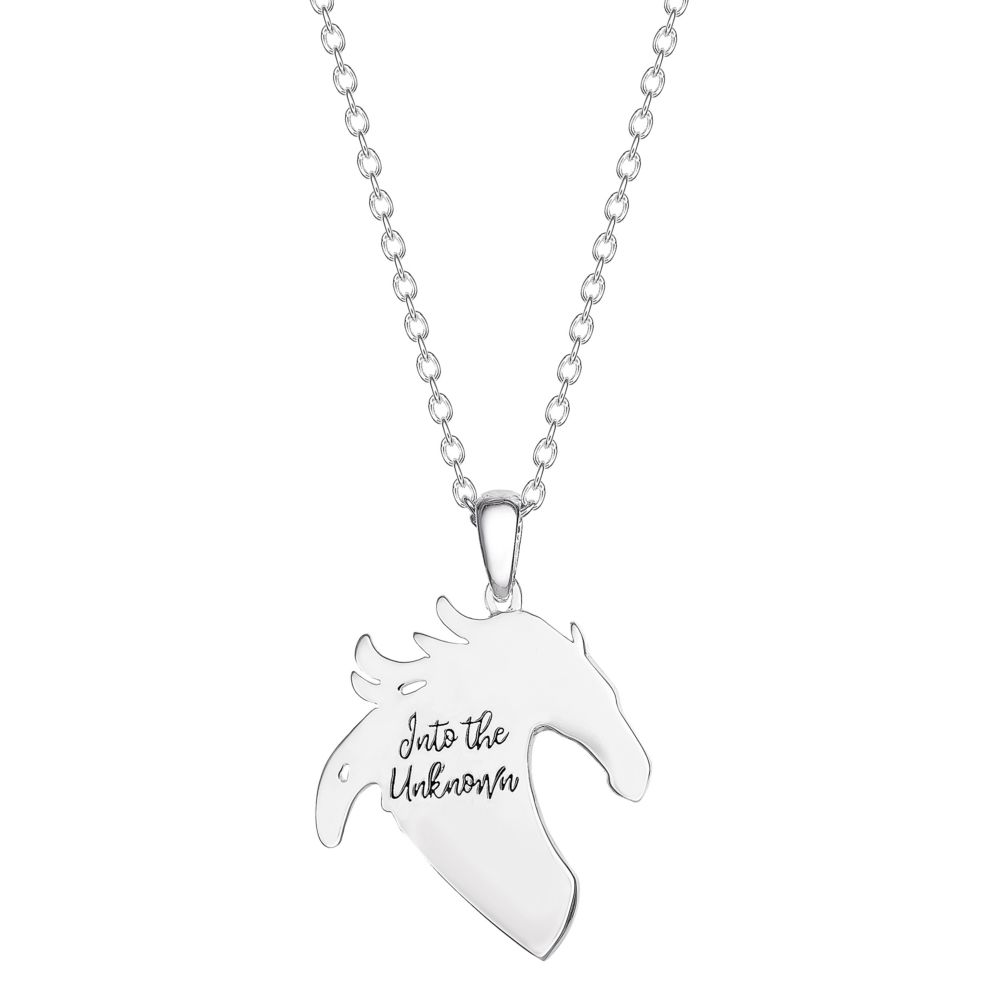 Carved in polished solid sterling silver, the Water Nokk’s flowing mane features glassy ombre blue enamel. Engraved on the reverse is the quote “Into the Unknown.” The pendant hangs from an adjustable sterling silver cable chain. 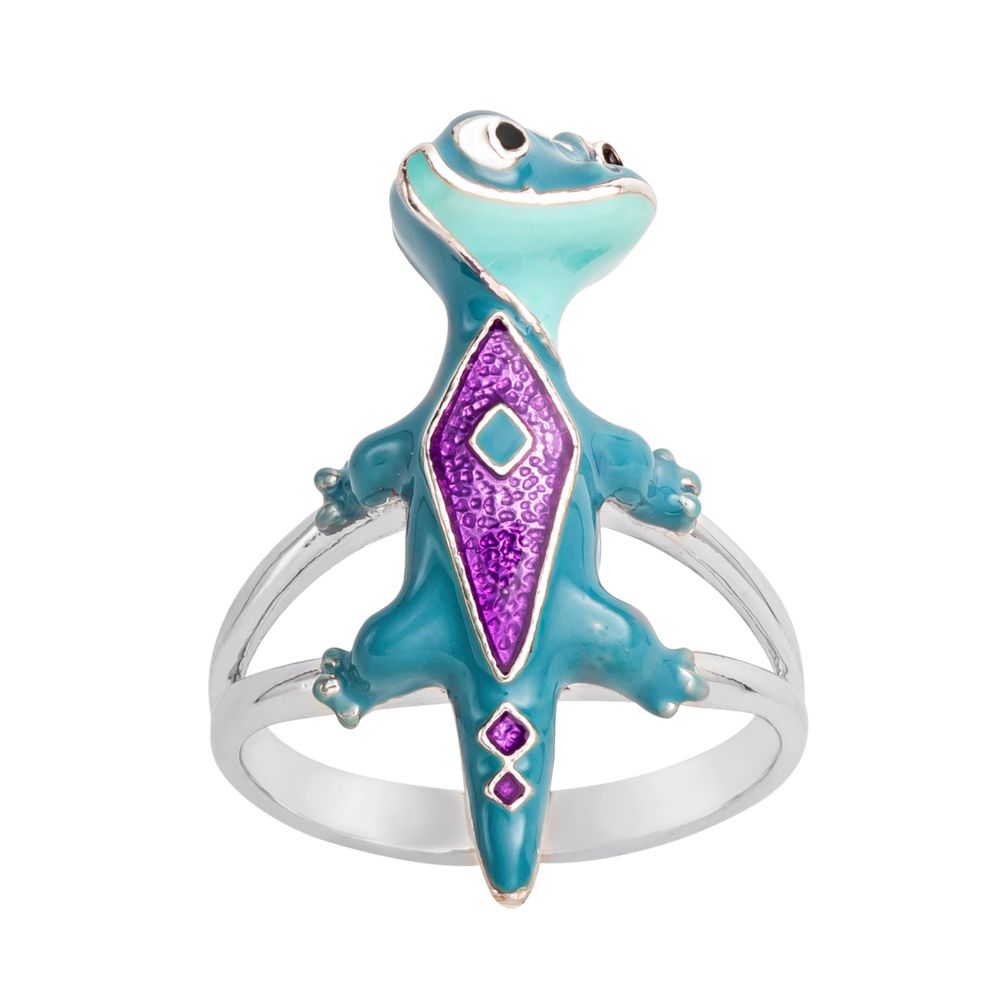 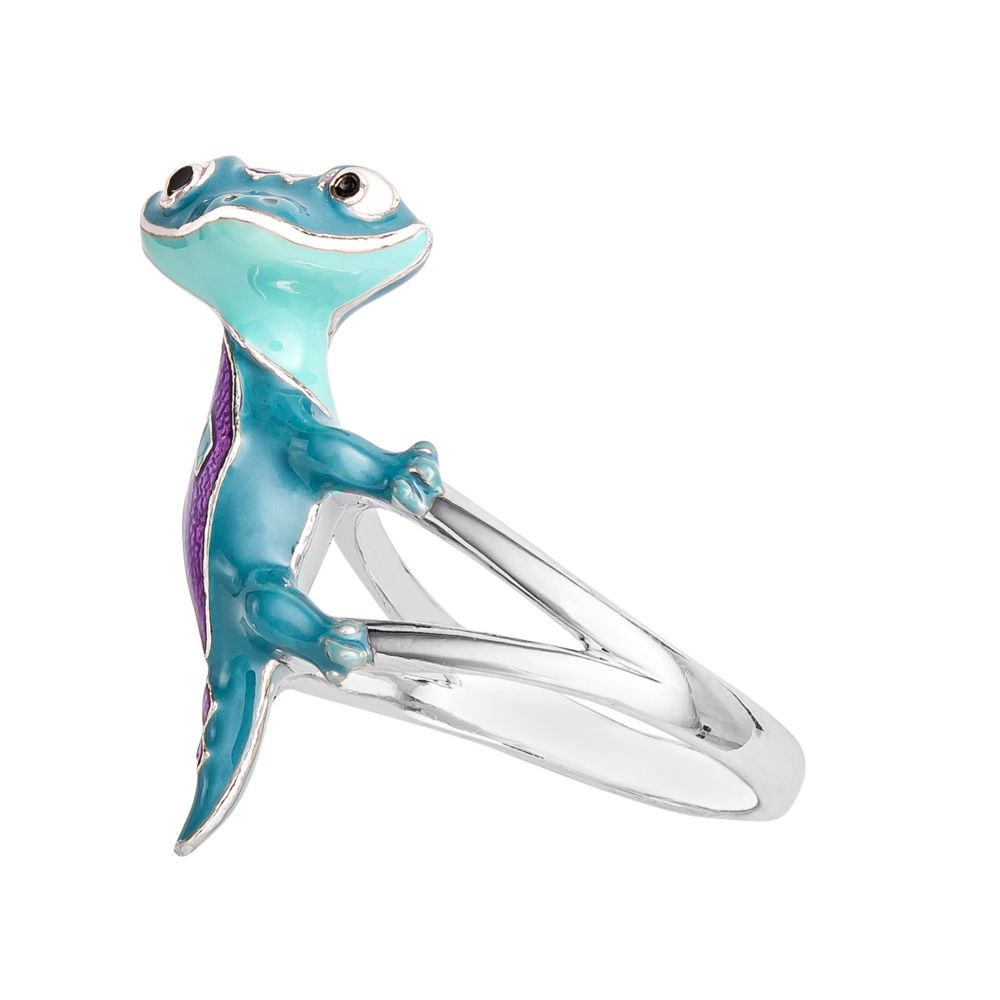 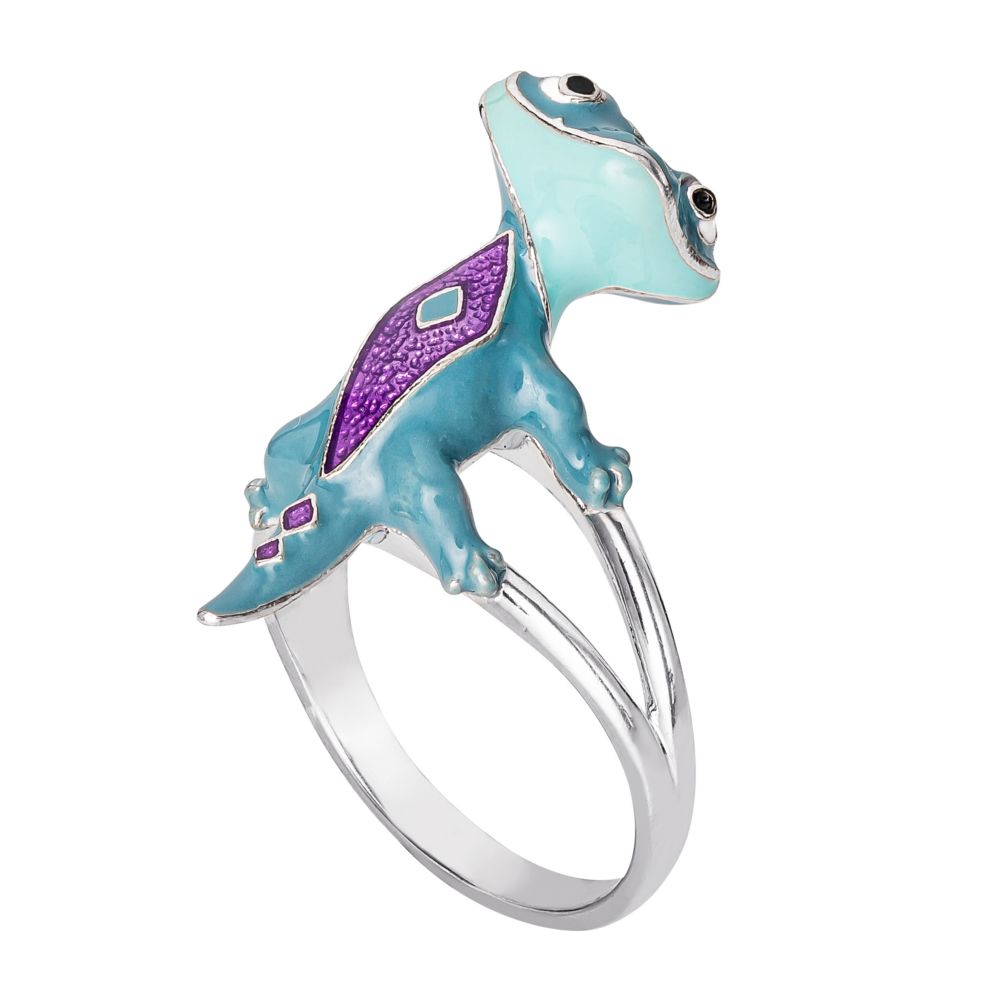 Carved in sterling silver, Bruni the Salamander perches on your finger. Adorably enameled in aqua tones with a big grin and round eyes, Bruni is accented by glassy transparent purple enamel over a subtle scaled texture. Split-style polished sterling silver ring band. 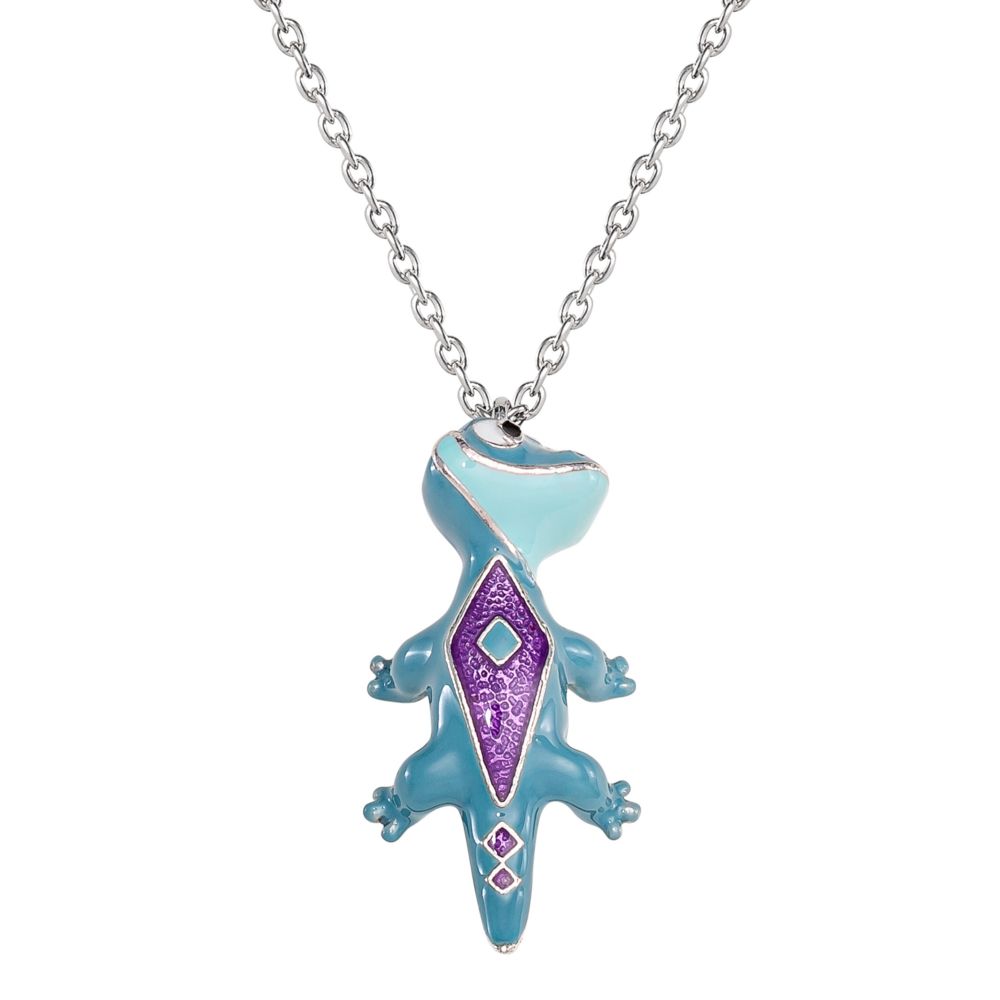 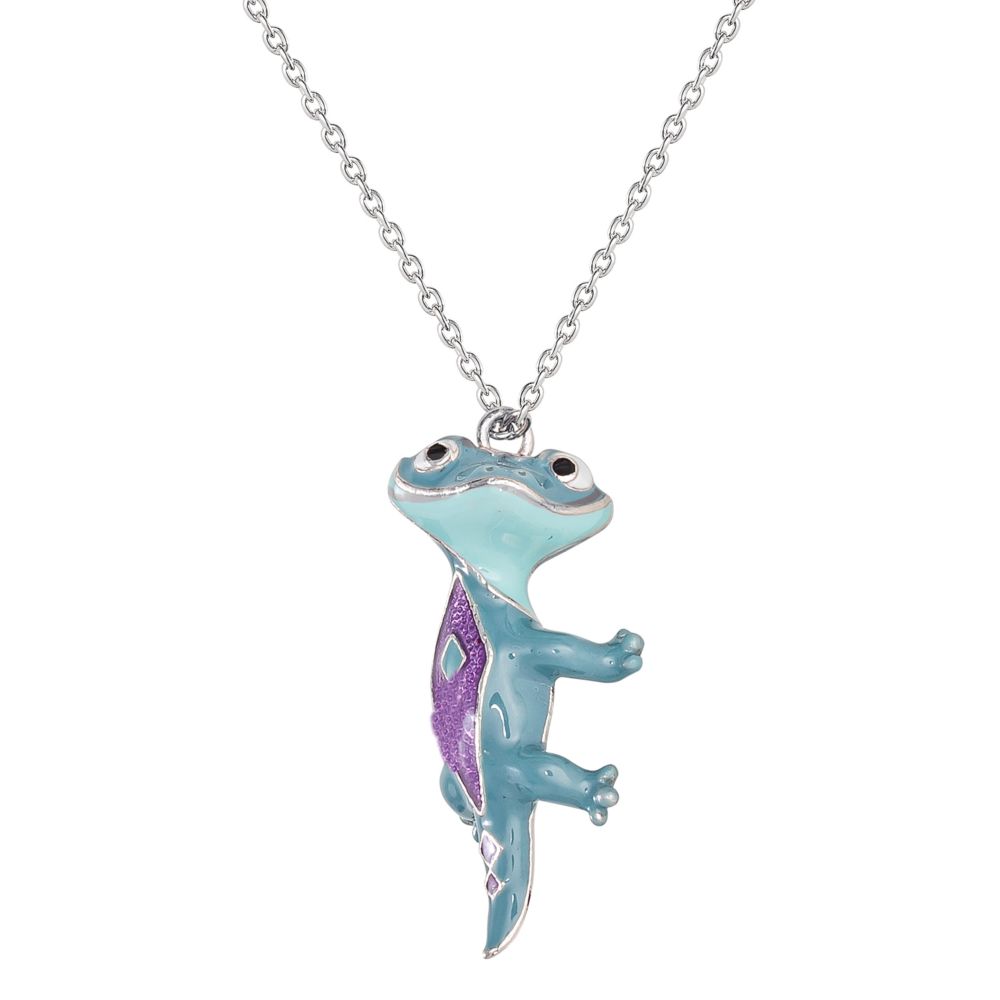 Carved in sterling silver, carry Bruni the Salamander on your adventures! Adorably enameled in aqua tones with a big grin and round eyes, Bruni is accented by glassy transparent purple enamel over a subtle scaled texture. The pendant hangs from an adjustable sterling silver cable chain. 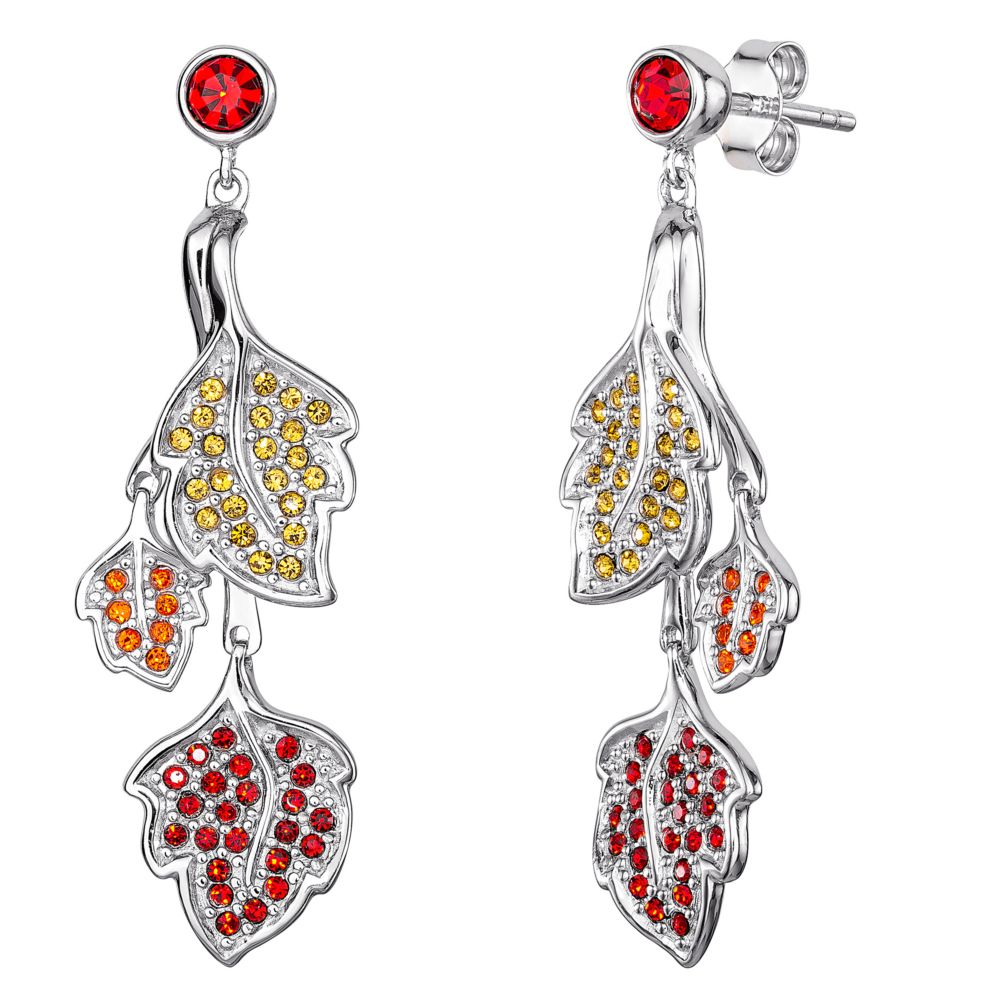 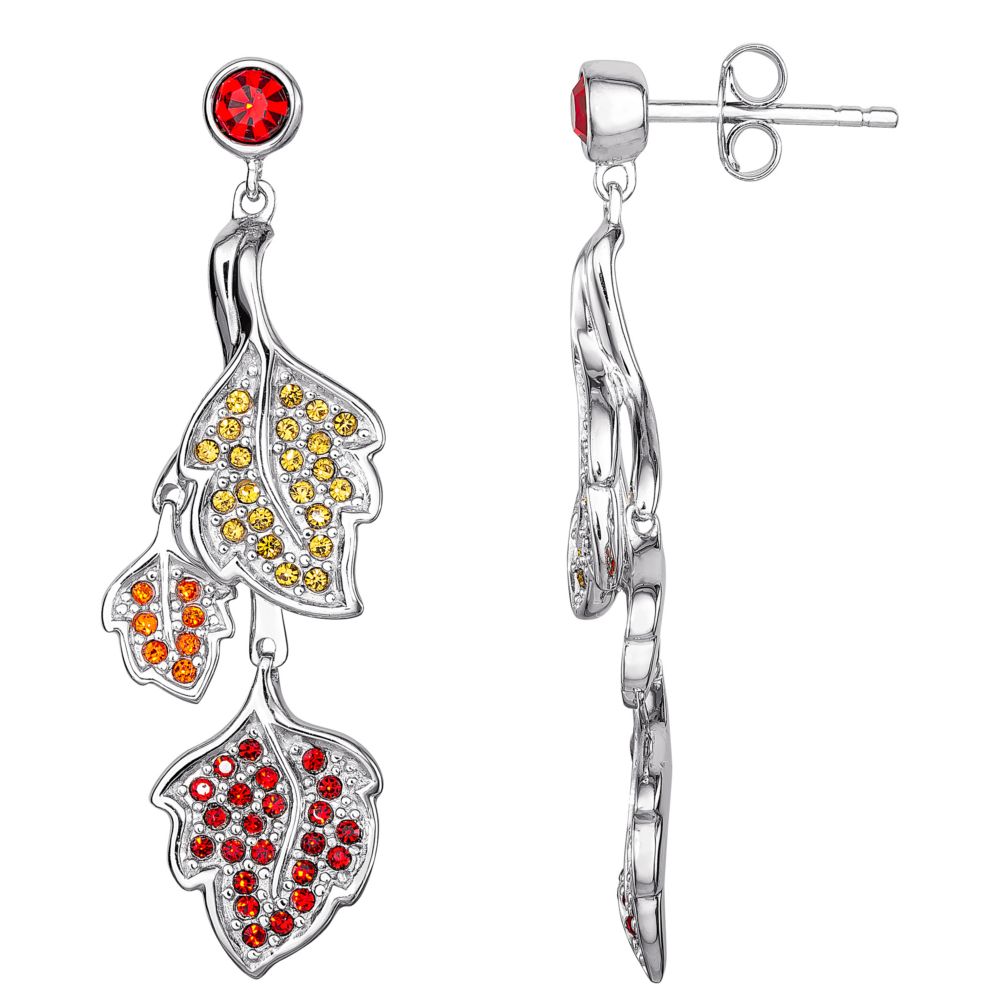 As playful as Gale the Wind Spirit, as she twirls the autumn leaves, these intricately designed sterling silver earrings rustle with your movement! Each earring has faceted red, orange, and yellow pavé crystals, and the leaves are articulated to wiggle and move as they are worn. The sterling posts feature vibrant red faceted crystals, with sterling clutches. Extra rubber security backs included. 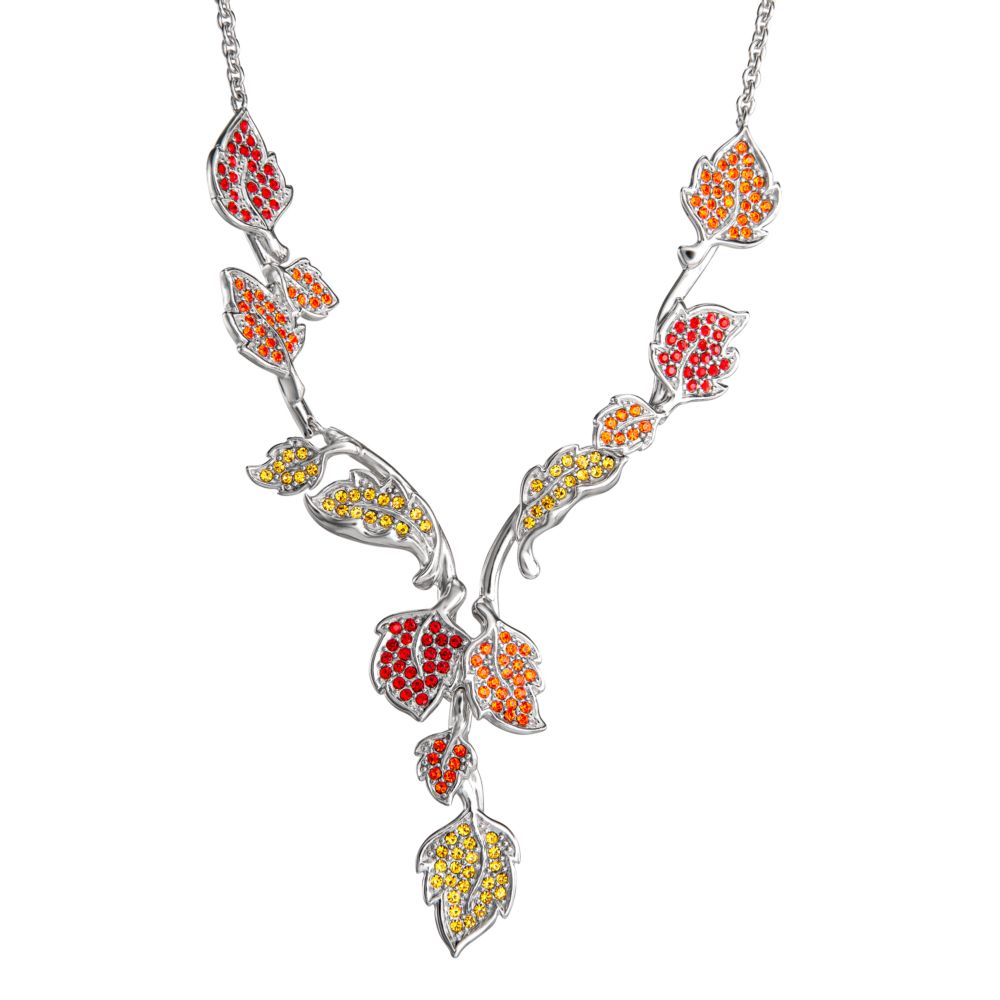 As playful as Gale the Wind Spirit, as she twirls the autumn leaves, this intricately designed sterling silver statement necklace rustles with your movement! Faceted red, orange, and yellow pavé crystals create an elegant Y-shape, and the leaves are articulated to wiggle and move as they are worn. Comprised of four linked components, the adjustable sterling chain allows the necklace to lay elegantly against the collar bone or dip further at the décolletage. 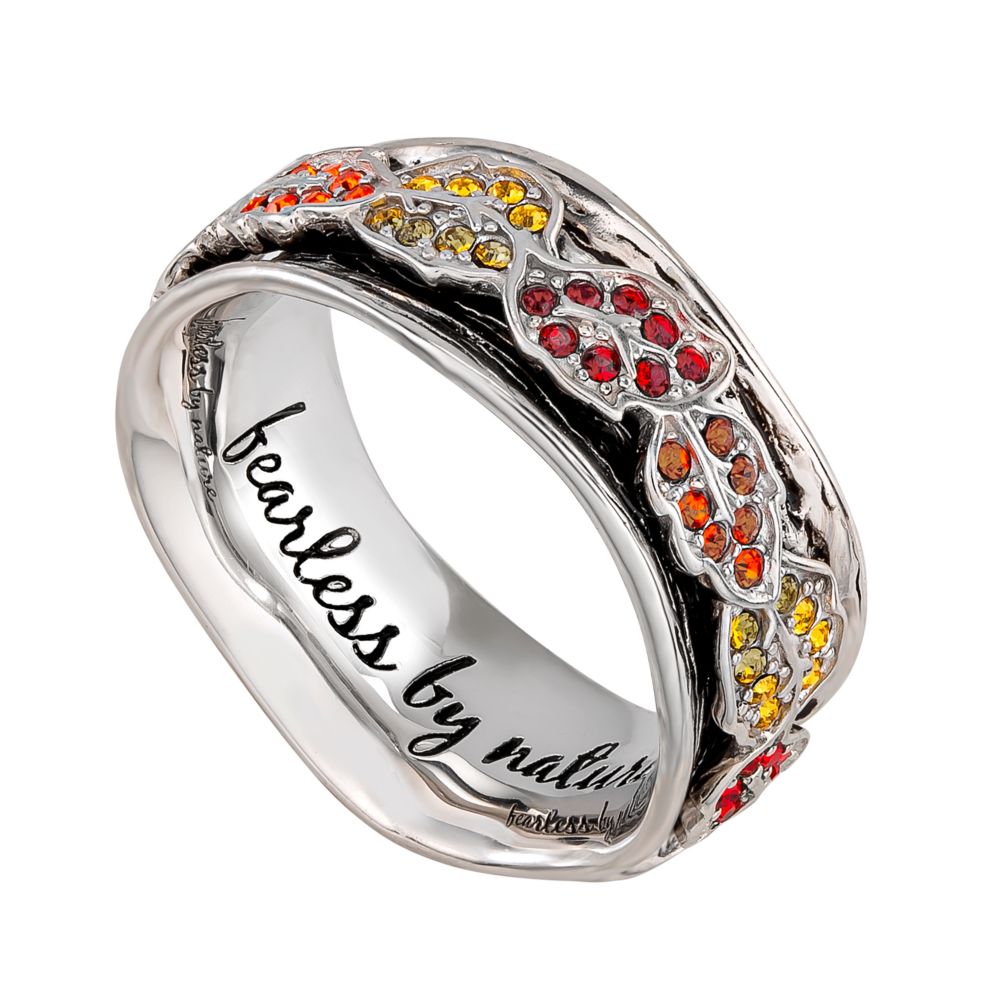 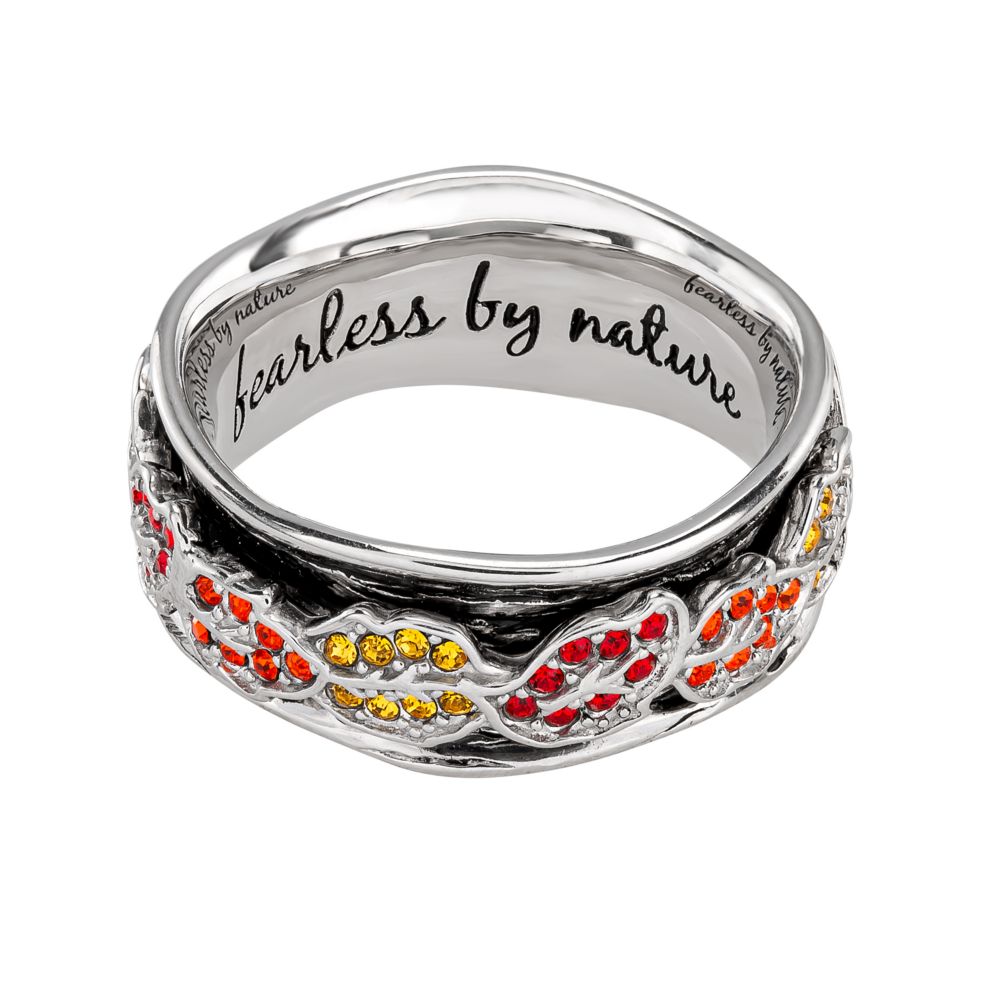 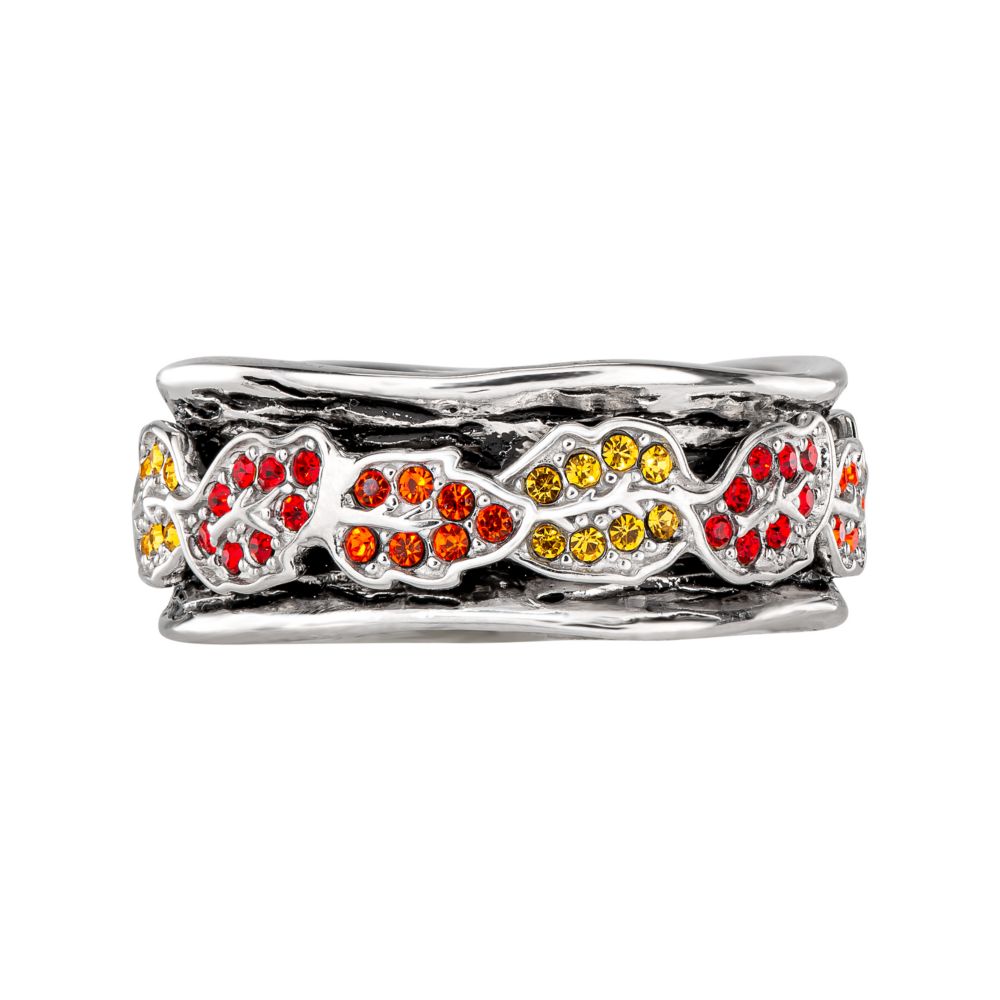 As playful as Gale the Wind Spirit, as she twirls the autumn leaves, this sterling silver spinner ring swirls around your finger! A sterling silver band of antiqued tree bark cradles a spinning band of autumn leaves brought to life with faceted red, orange, and yellow pavé crystals. Engraved on the inside of the band is the quote, “Fearless by Nature.” 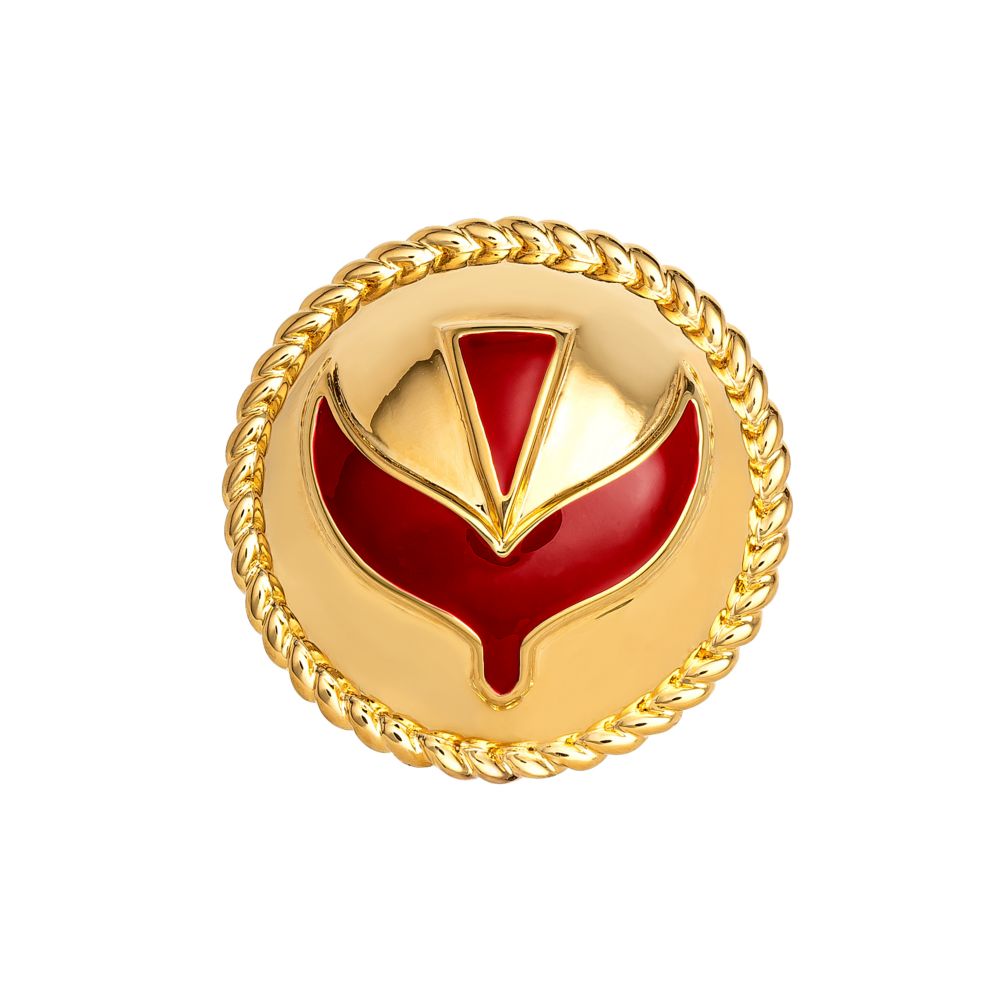 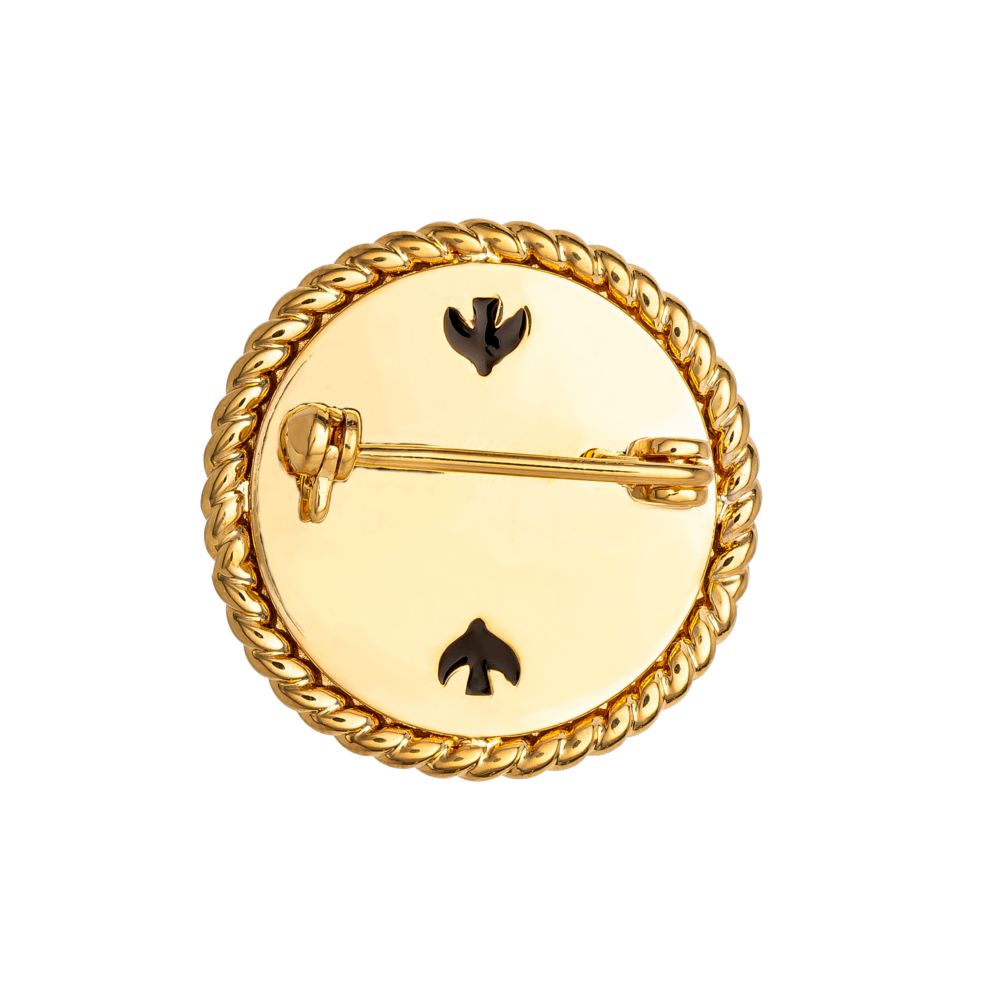 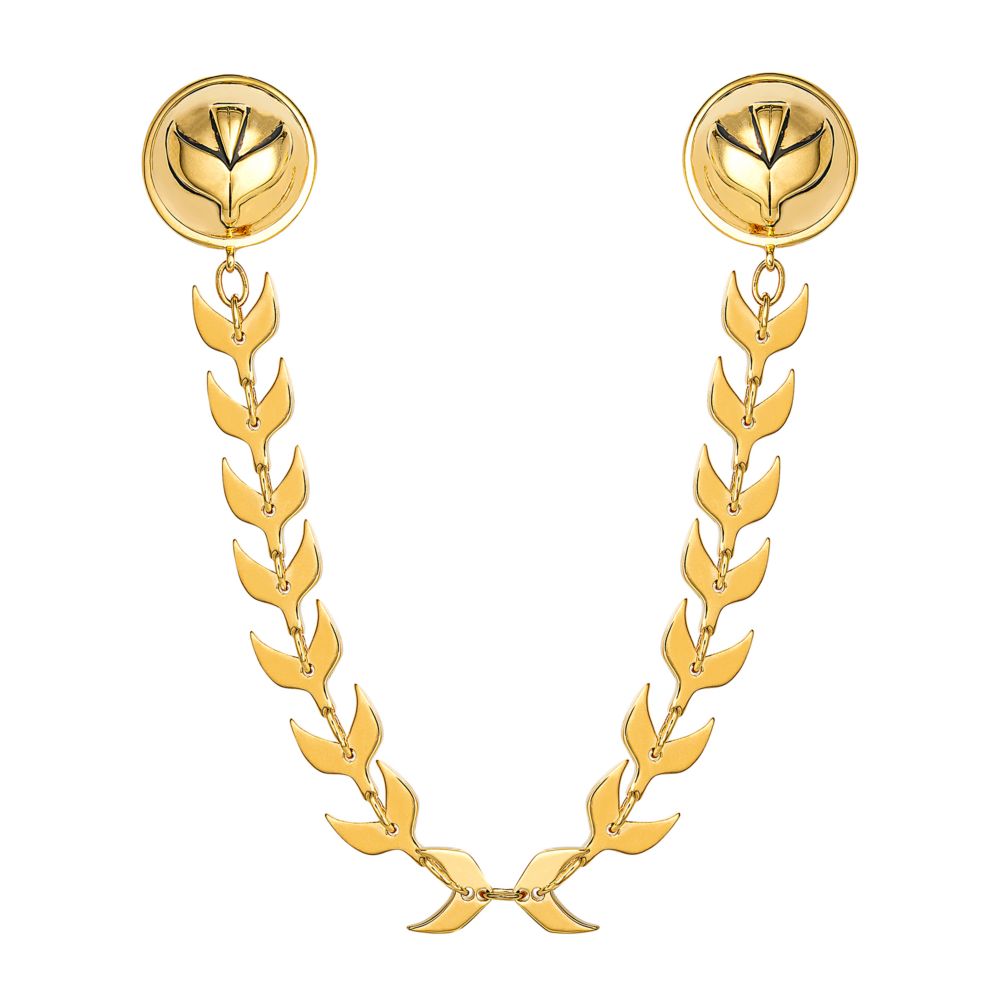 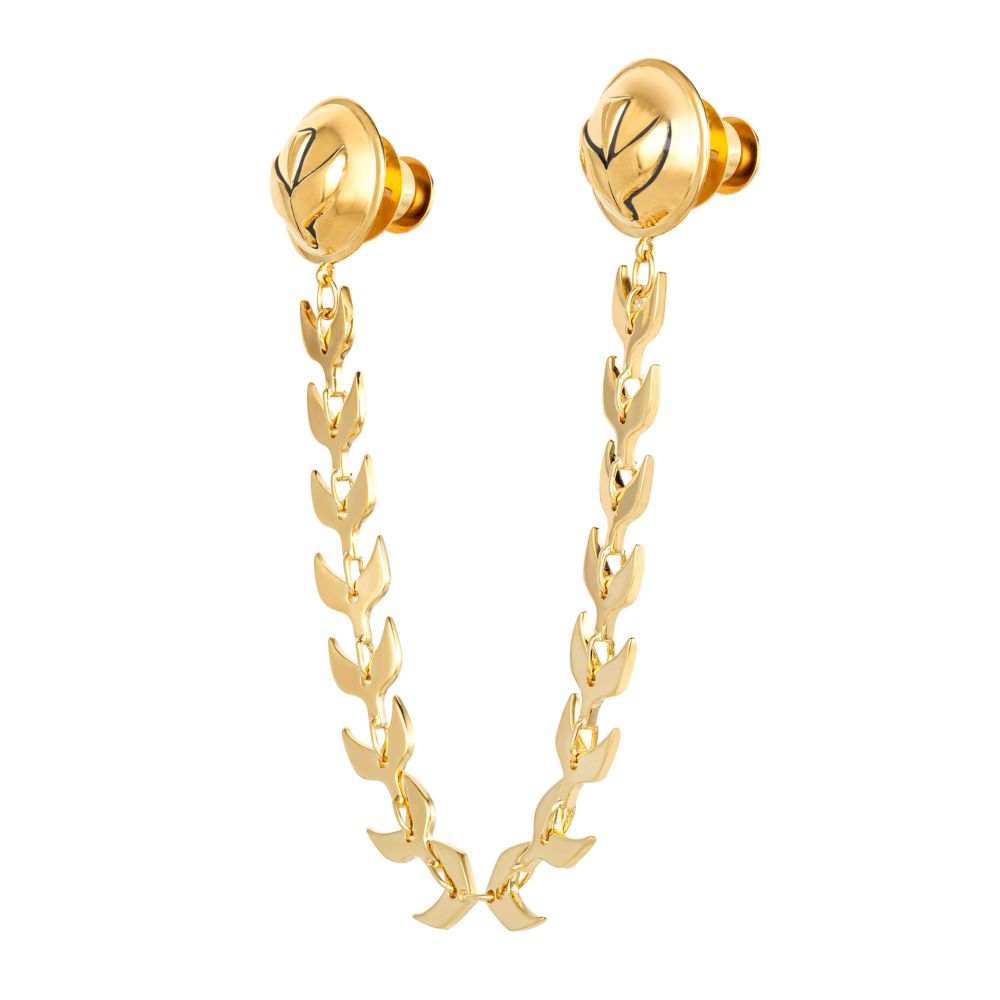 More about Disney and RockLove’s collaboration

Every item from RockLove’s Disney collection comes in its own special packaging. From the RockLove website:

Hypable writer Michal Schick conducted an interview with Allison at New York Comic Con 2019 in anticipation of her forthcoming work for Disney x RockLove. Here’s a transcription of that interview:

Hypable: What’s your favorite collection that you’ve created for RockLove?

Allison: That’s a tough one! Definitely I have to pay the homage to certain Disney pieces because those were the very first designs that I got to truly stretch my wings [on]. And working with Disney, I had fewer limitations, so items like the Dagger Heart collection for Snow White was really the first time I got to do my own custom-cut crystals, really bling it out and make something that was edgy, and dangerous, and fashionable, but also really glittery. So, those are pretty special pieces for me because it was a moment where I got to do something new as a designer.

And then the Ursula shell locket was really something that was one of the lightning-strike moments where I was in the shower, and I’m thinking about things, and I keep running out of the shower to tell my husband. Like, “Okay! Let me tell you about this! I’m gonna draw you a little sketch. Here’s my post-it!” And that was, again, another moment where I got to elevate beyond just the casting, the simple heavy-sculpt, to something truly interactive that was a step beyond and embracing the storytelling. So, I feel like those were moments where what I was as a designer — I’d felt like a jeweler, and these were moments that I suddenly felt like a designer.

Hypable: What mediums do you work in to create your jewelry?

Allison: So, everything RockLove at this point is sterling silver, that nickel-free sterling for those of us with sensitive skin and metal allergies, which is my origin story. [I had] really bad metal allergic reactions, so I wanted to make my own [jewelry] to truly trust what was going in it. So, everything’s a sterling core, but depending on the inspiration, the property, the story behind it, I like to do maybe a gunmetal rhodium or hand-painted enamel. And then I’m often putting little jeweler technique tricks in there.

I studied in Florence for a jewelers’ apprenticeship, and I learned how to do things like transparent enamel where the texture is beneath in the metal, so you get to see the texture glowing from within. The Fairest One of Them All apple necklace has that where it’s engraved into the necklace, and then the candy-red transparent enamel is on the outside — so it’s smooth to the touch, and it feels like it’s glowing from within.

When it’s something that’s a little bit more rugged and earthy, like Star Wars is with all the chromed metal of all the different machinery [and] the different droids, that is really conducive for sterling silver. So that I’ve kept unplated, but I have colored crystals [or enamel] in the right moments that helps further the story. So, the planetary medallions each have a matte enamel so that it’s reminiscent of the ecosystem of each planet.

Hypable: What’s coming up next for RockLove? Are there any upcoming properties you’re excited about?

Allison: So many exciting things! I definitely can tell you that next up to launch is Pokémon, which is a brand-new franchise [for us]. I’ve been working with them directly for a while now, to truly make sure that our characters are as “replica” as possible, paying true homage to each character that we love. There’s going to be a lot more Disney and Star Wars pieces coming out, and I’m definitely going to be doing a lot more superheroes in the new year. So, Marvel will be back, and then I’ve been working on Star Trek, including some props. So, not only are we going to have some “Inspired By” [pieces], but we’re going to have some true, as-seen-on-screen pieces.

Hypable: Mulan is my favorite Disney princess because she’s objectively the best. Will we see a collection for her upcoming movie?

Allison: You and me both! My favorite princesses are Tiana and Mulan. Both of their messages are honor, and integrity, and working hard every single day to move toward your goal. As a designer and a CEO and a woman, I feel a strong resonance with that. So, in choosing what princesses I would design, after much love to the villainesses, I’m definitely starting with my favorite princesses, and the message that I really respect from Disney.

Hypable: Your pieces are incredibly intricate. Are there any Easter eggs or hidden details that people might miss?

Allison: For the Star Wars medallions, I get a lot of questions about what the Aurabesh [text] says. It’s actually in a coin. You have a portrait and then [the words] are called the legend. The legend for each one is the accurate translation of the planet’s name. And then, of course, with the Shell Locket and the Aria Necklace, those Little Mermaid necklaces with the music notes, the important thing to know is that for us that read music (because I was initially violin before I said, “Sorry mom! I’m gonna go be a jewelry designer!”), that is accurately transcribed. So, anybody that can read music can actually read along to those notes because they’re accurate to Ariel’s aria.

For Star Wars, a lot of people are like, “Is that the Death Star?” No, it’s a thermal detonator! It’s the weapon of choice for a self-saving princess.

Disney x RockLove’s ‘Frozen 2’ collection will be available to purchase on November 22, 2019

'Anyone else?': Thor's greatest hits