We use cookies to ensure that we give you the best experience on Hypable. If you continue to visit us, we will assume that you are happy with it.
9:00 pm EST, February 12, 2020

Riverdale season 4, episode 13, finally showed us what happened to Jughead in the flash forward. Well, at least it kind of did.

Riverdale season 4, episode 13, “Chapter Seventy: The Ides of March,” was one of my favorite episodes of the show in a while, and not even just because we finally got some answers about Jughead’s fate.

For the first time in what seems like forever, the core four actually spent some time together in this episode of Riverdale! They’ve been so separated in season 4 that it was so nice to get them all in one place, even if it was only for a short time. Not only are things way more fun when the characters are together, but it also makes for more simplified and streamlined storytelling where you can really get into what’s going on.

This episode of Riverdale essentially consisted of just two storylines, as opposed to the five that’s become the norm for season 4. The first of these centered around Veronica and Archie.

It’s been so long since we’ve actually seen Archie and Veronica act like a couple, and I am so glad they’re back! Does their whole “let’s just have fun and not think about the future” mantra make me extremely nervous? Yes. But, I was so thrilled to see them share the screen again that I’ll let that slide for now. They’ll have much bigger fish to fry in the next episodes of Riverdale anyway. 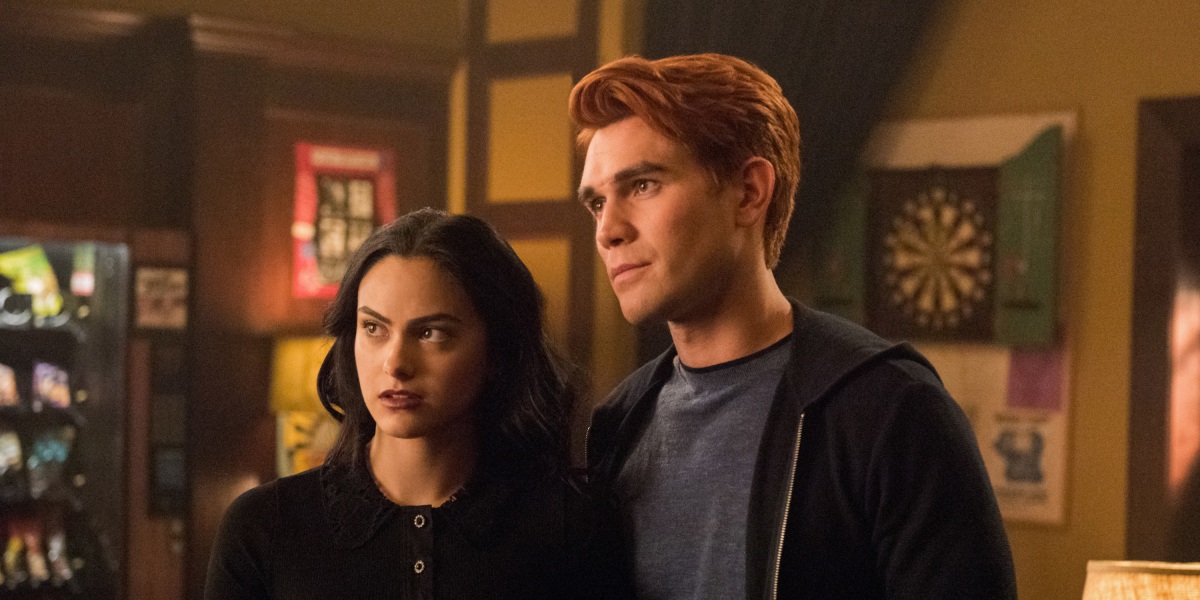 While Veronica’s friskiness kept the “fun” going for Varchie for a while, it soon became clear that both sides of the ship were dealing with much bigger problems than stifled sex drives. Their need for each other went far beyond their desire, and it’s in the tough stuff that Varchie really shines (even though they’re pretty great at the physical stuff too).

It was very cute and very “Archie” of him to take the fall for Veronica when Mr. Honey was accusing her, but that was far from my favorite Varchie moment in Riverdale season 4, episode 13. Honestly, Veronica didn’t even need him to do that. She had the situation handled. I was so proud of her for sticking up for herself against his inappropriate threats. A principal should never want to keep a promising student from college, and he took way too much pleasure in dangling her demise in front of her. Her retorts showed off her character at her best. Her strongest and smartest. It was great to see after watching her frustratingly flounder with Hiram all season.

Related: Chilling Adventures of Sabrina part 3 review: Is this now the magical Riverdale?

There was another Varchie moment in the episode that I liked much better. When Veronica came to Archie eager to show her appreciation for his chivalry, he did not happily accept his prize. Instead, he sensed the mourning underneath the mask of the women he loves, and called her out on her shit. Varchie doesn’t dance around the truth and coddle each other. They push each other to be better and support each other in becoming so. Veronica now has a chance to do the same for Archie as he embarks on his plan to actually care about school again!

In revealing Archie’s fate, Mr. Honey proved for the second time in Riverdale season 4, episode 13 that he’s a terrible principal. There’s no way Archie should be hearing for the first time that he might not graduate right now! This should have been identified to him as soon as his grades started slipping so he could start working harder. Again, teachers shouldn’t want to royally screw their students over! I guess Principal Honey never got that memo.

Obviously Hiram was still at the center of Veronica’s story because it looks like we’ll never shake him, so he was also a big part of Archie’s story in Riverdale season 4, episode 13. As sad as I am for Veronica, I still can’t bring myself to feel bad for Hiram. Also, I definitely can’t get behind Archie taking advice from the man who sent him to prison. I don’t trust him and I think everyone is being way too nice to him. Maybe the slight pivot in his war with Veronica will make things more interesting? A girl can dream. 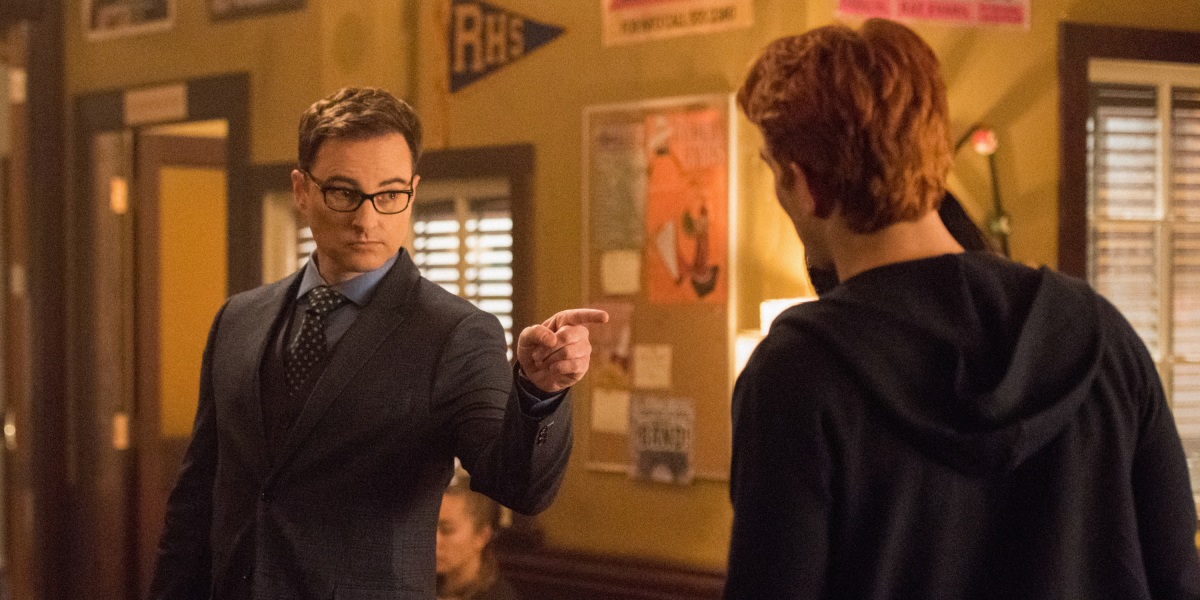 Moving over to the other half of this week’s episode, let’s talk about Jughead, who’s having an even worse time at school than Archie and Veronica. If Mr. Honey is Severus Snape, Mr. DuPont is straight up Voldemort. It’s both strange and infuriating that Stonewall Prep is collectively conspiring against Jughead, and it makes it so much worse that he’s at the helm.

This episode was so terrible for Jughead, but Betty was such a warrior for him. From calling Donna out, to meeting with her privately, to rising above her threats, she went above and beyond to be the girlfriend and support system he needed. Unfortunately, that just made the end of the episode even more heartbreaking.

Riverdale season 4, episode 13 didn’t let up on Jughead for a second. First, he was kicked out of the Quill & Skull society, then he lost his Baxter Bros. contract, then he found out that his enemy had a sex tape of him and Betty, then he got kicked out of school, and now he might be dead?! That’s a hell of a week, even for Riverdale.

Jughead went into the woods with a plan, and his plan definitely wasn’t to kill Bret. Maybe his plan involved faking his death to get Bret to forget about the tape. Maybe he offered to help Bret stage the perfect murder in exchange for the tape. Maybe he planned to frame Bret for his death for some leverage? While none of these make a ton of sense, Riverdale has given us some pretty “out there” explanations in the past.

I also think it’s more likely that the Stonewall kids wanted to make Betty think she had hurt Jughead than actually hurt him, so I’m hoping she’s in the clear too. It’s also possible that she was in on Jughead’s plan all long. So many possibilities, and we’re getting closer than ever to answers! Write some of your best theories in the comments. 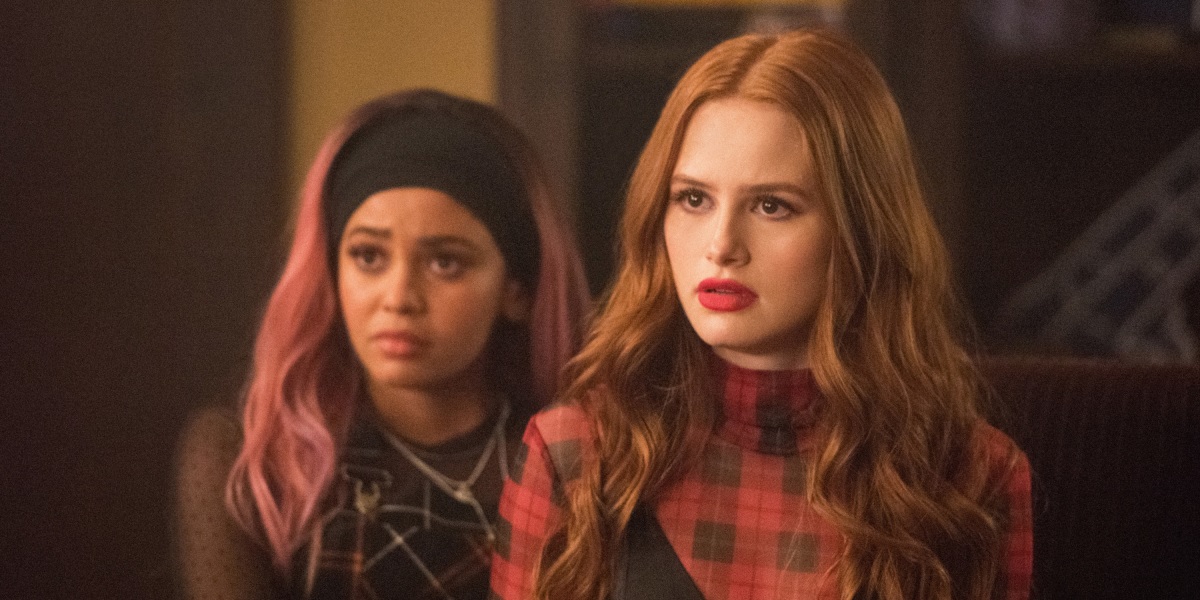 Cutest couple: Even though Bughead was solid and Choni had that smoking hot threesome tease, it absolutely has to go to Varchie this week.
Best dressed: Veronica, Toni, and Cheryl can share it for their epic ambush attire.
Worst dressed: Bret. He really can’t pull off the Roman look.
Most likely to come up with the most badass business name ever: Cheryl and Veronica! I’m fully obsessed with the “Red Raven” name.
Most likely to go to jail for taking gross illegal videos: Bret. Get out of here!
Most likely to be the cool kids at the insane asylum some day: Everyone at Stonewall Prep. Those kids are crazy.