We use cookies to ensure that we give you the best experience on Hypable. If you continue to visit us, we will assume that you are happy with it.
2:45 pm EST, January 6, 2019

Rise of the Empress duology sets new standard in YA retellings

Last year one of my reading goals was to broaden my horizons, reading more books by women of color, leaning away from more Western-influenced fantasy books. It didn’t take me long in my search to stumble across a Twitter thread that listed #OwnVoices East Asian-inspired fantasy books, where Julie C. Dao’s Forest of a Thousand Lanterns turned up again and again in the replies.

I added it to my to-be-read list, along with other amazing books like Jade City by Fonda Lee, The Poppy War by R.F. Kuang, Shadow of the Fox by Julie Kagawa, Empress of All Seasons by Emiko Jean, Girls of Paper and Fire by Natasha Ngan, and Flame in the Mist by Renee Ahdieh, to name a few.

I have a bad habit of collecting books and starting to read them without reading what they are about, using word of mouth and a quick glance at a summary before delving in. In a way, I like not knowing and being completely surprised. Sometimes this works, but other times it is rather jarring. That being said, I was completely swept away by the world of Forest of a Thousand Lanterns, not realizing that it was the origin story of the Evil Queen in Snow White retold. 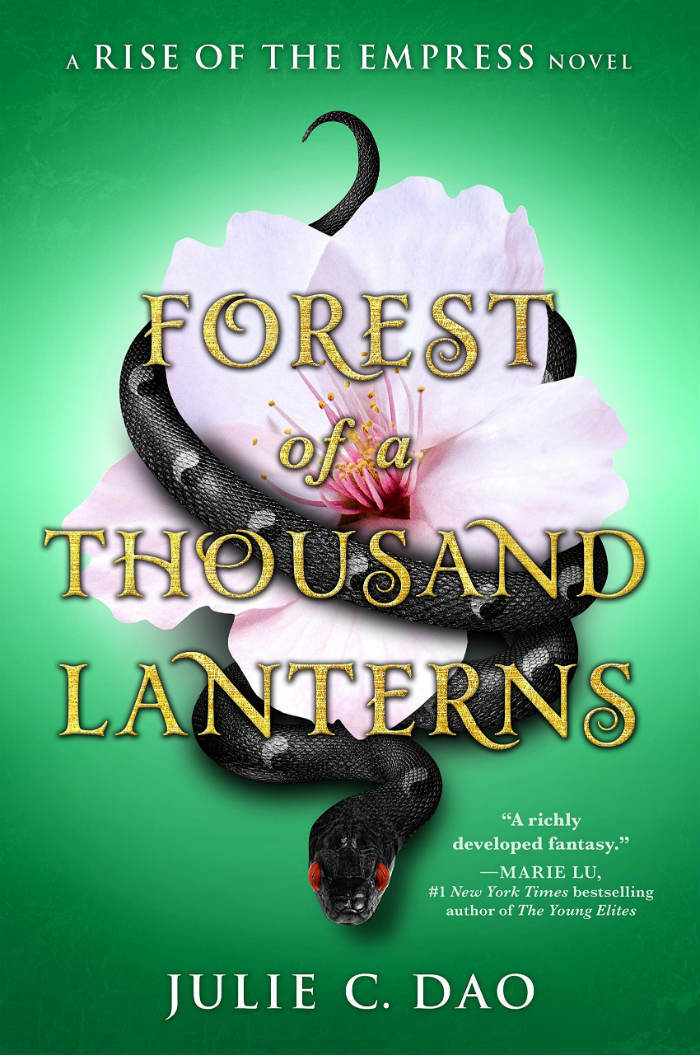 Rise of the Empress is a fleshed out world full of East Asian influence blanketed in a beautiful sense of magic and folklore that made it so that I had no inkling that it was a retelling until I started Kingdom of the Blazing Phoenix and it finally clicked. Like I said, I tend to skim over spoilers or when someone goes into too much detail about something I plan on reading, so even though it was readily known, I was pleasantly surprised.

The reimagining aspect is subtle, with Julie C. Dao expertly crafting her world and masking the original story with plot twists, amazing characterizations, and rich folklore within the world she’s crafted.

With Forest of a Thousand Lanterns being from Xifeng’s point of view, we as readers saw her descent from innocence into corruption. Seeing the beginning of the Evil Queen’s reign adds so much to the story of Snow White, and not realizing that the main character was actually an anti-heroine makes it that much better. After all, villains are the heroes of their own stories, and Xifeng is the epitome of this trope.

In a way, reading Xifeng’s journey to becoming the Empress will stick with me because each of her decisions made sense after years of manipulation and lack of freedom. She lived a life with her so-called fate looming over her. She tried to run from it, but in the end she gave into the power and corruption.

The antithesis of Xifeng, Jade, has the qualities of Snow White without being overt. Being Xifeng’s stepdaughter, kept secluded in a monastery, Jade is pure and her intentions are good at her core. No matter what happened to Jade, she remained good. With the deaths of the ones she loves and learning of the terrible things that her stepmother did in order to gain her power, Jade didn’t fall to the darkness that consumed Xifeng. The characters overall in Rise of the Empress were compelling and distinctive. Wei, Xifeng’s first love interest whom she pushed away in order to go down the path of greed and corruption, was one of my favorite characters though he was barely in it. He loved Xifeng and tried, in vain, to direct her towards a good path where they could be happy together, without the influence of her Guma and the fate that she clung to.

Wren, kitchen girl-turned-fighter beside Jade, brought a lot to the dynamic between Jade, Koichi, and herself with her dislike for the fact that Jade was a princess, kept Amah away in Jade’s seclusion, and her eventual turn around in becoming important to Jade. The subplot of Koichi and Wren pretending to be together and thusly making Jade believe that Koichi could never love her was probably one of my favorite small details that I lived for.

Speaking of Koichi, he was by far at the top of my list of favorite characters in this amazing duology. Circling back to the original story, Koichi brings a realistic inclusion of the fantastical dwarves, making him and his father actual dwarves.

From Amah to Koichi, Kang, Ming, and even the ghost Fu, Julie C. Dao made all of the secondary characters just as well-rounded and fleshed out as the main characters Xifeng and Jade. With distinct characteristics and personalities, they added another complex layer to her already beautifully full world-building.

The Rise of the Empress duology is complete and available in book form as well as audiobook. Personally, I listened to the series and Kim Mai Guest did a beautiful job narrating it. I for one will be keeping Julie C. Dao on my radar and add whatever she writes next immediately to my to-be-read list. Her next project hasn’t been announced as of yet, since Kingdom of the Blazing Phoenix was just released in November of 2018, but according to her Twitter she has an as-of-yet-unnamed YA fantasy coming out this fall!

Related: New wave of YA fantasy exudes female empowerment
‘Girls of Paper and Fire’ is a devastatingly beautiful story of survival and love