Exclusive: Rick Riordan reveals what’s next after ‘Trials of Apollo: Tower of Nero’

As Rick Riordan finishes up the final book in the Trials of Apollo series, he’s looking ahead at what’s to come.

I spoke with Percy Jackson author Rick Riordan in conjunction with the Tower of Nero cover reveal and excerpt we would be debuting on Friday, February 14. We, of course, talked about the final installment in the Trials of Apollo series, but I also had some bigger questions on my mind:

What could he possibly be working on next?

There’s a lot of great new information in the interview below, and a lot for Percy Jackson fans to look forward to. While Tower of Nero hits store shelves on September 29, 2020, it won’t necessarily be the end of our favorite demigods.

Interview with Rick Riordan about ‘Tower of Nero’ and beyond

1. What was your main objective going in Tower of Nero? What kind of headspace were you in?

My headspace is limited, so I try to gate-check most of my baggage before boarding the flight. No, seriously, the fifth book is all about bringing the story home. In this case, that’s literally true, since Apollo and Meg return to New York where our adventures began. The ending has to be satisfying for the characters and the readers. That’s the big challenge. Five books is a long arc! I don’t do epilogues, like “twenty years in the future, here are the names of all their kids and what kind of car they drive,” etc. I don’t like sealing off the future like that. But at the end of Tower of Nero, I hope readers will feel like they have a good idea what the future holds for the important characters we’ve interacted with, old and new.

2. Is there a particular cameo you can tease us with? Is there someone fans are going to be really surprised or excited to see?

I teased this on my most recent tour, but Nico di Angelo and Will Solace play large supporting roles in Tower of Nero. My ears are still ringing from the happy screams of fans, so I suspect they liked that news! We will also see Camp Half-Blood again, meaning Apollo’s children Kayla and Austin, and our old friend Rachel Elizabeth Dare. That’s just for starters.

3. What has Apollo’s journey meant to you over the course of these five books?

Apollo has had the most dramatic character growth of any protagonist in any of my series, I think. That’s because he was such an insufferable person at the beginning, as you might expect a god to be. But he’s grown. He’s suffered. He’s learned to be human. That’s been challenging and a lot of fun to write. Also, Meg’s story has been very painful but important. She’s a survivor of emotional and mental abuse by Nero, and in book 5, we will see how she comes to terms with that legacy. It raises difficult issues about what ‘family’ means, and when you have to protect your own well-being by putting down firm limits with toxic people.

4. Can you explain the Tower of Nero cover to us? What are some of your favorite elements?

I always love John Rocco’s cover art! This one, like many of them, is more thematic than literal. Not a spoiler, since we have known since book 1 that Apollo will have to face his old enemy Python, who has reclaimed the caverns of Delphi. This scene imagines what that final confrontation might be like. Is Apollo ready for it? He beat Python before only because he had godlike power. Has he gotten strong enough, and learned enough, to overcome Python as the lowly Lester Papadopoulos? 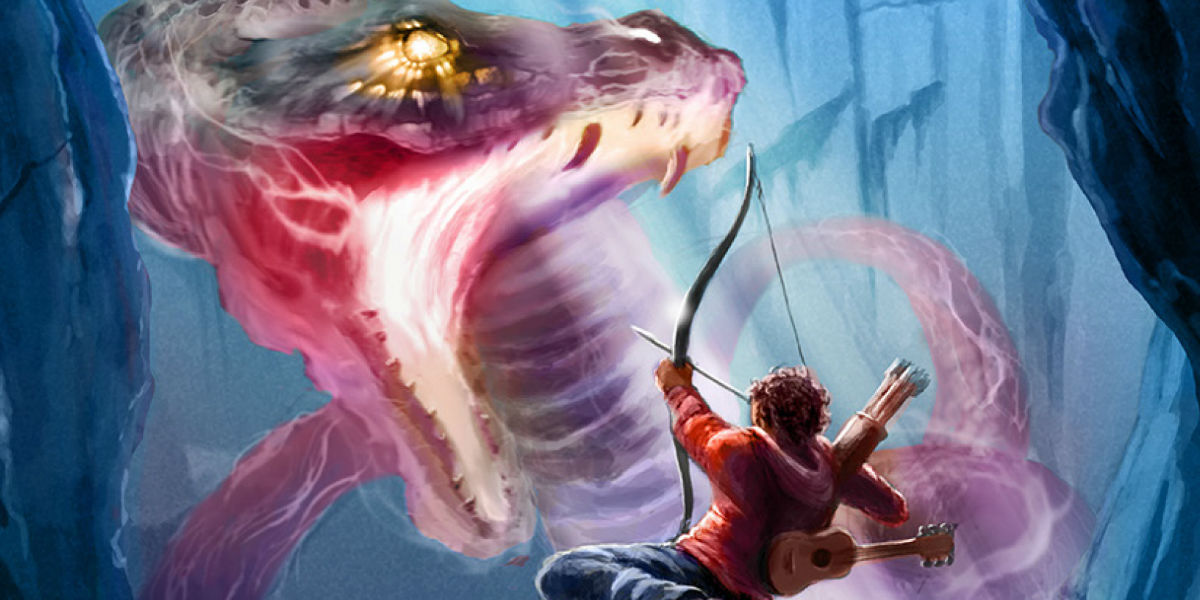 5. When the Trials of Apollo series is complete, can we expect to see any of our favorite Percy Jackson heroes again?

My thinking right now is I may explore individual characters’ stories in one-off novels. I recognize that with 15 books now in Percy’s world, the idea of diving in can be daunting for new readers. That’s a lot of backstory! I like the idea of writing stand-alones that, well, stand alone, so readers who have never even read The Lightning Thief can still enjoy the story. Those novels could focus on any of our demigods, but right now this is just in the brainstorming phase. I haven’t signed any contracts or started any outlines.

6. Can you give us any teasers for upcoming projects?

When I am done with Tower of Nero, I will have no outstanding publishing contracts for the first time in roughly 20 years. I am sure I will keep writing books. I love it too much to stop! But I am going to allow myself a moment to breathe and enjoy the feeling of not being under a deadline. As to what I might do next, I have plenty of ideas aside from the one-off demigod novels I mentioned above. It’s too early to say which ideas I will pursue, though.

In the immediate future, I have two goals: To continue curating the Rick Riordan Presents imprint, which has succeeded beyond our wildest expectations, and to engage with the film industry after many years of self-imposed exile, to try (operative word) to get some faithful adaptations off the ground. I would really like my obituary, hopefully sometime in the distant future, to say more than: “And they made two crappy movies out of his books.” More importantly, my fans would like that, and I owe it to them to do my best.

7. What’s a dream project you’d love to work on if you had all the time and energy to spare?

Honestly, I feel like I am living my dream project every day, every time I start a new book. It’s hard to imagine having a better job. I love what I do. I love telling stories, and it’s an incredible honor to know there are actually people out there who are waiting to read them!

On the side, I love learning languages, so I guess if I could clone myself, I would spend more time abroad immersing myself in cultures and becoming more fluent. I’ve spent some weeks in Italy, which is always wonderful, but would love to spend more time there. I recently did a two-week immersion course in Ireland, learning the Irish language that my ancestors would have spoken in County Cork. I find these trips inspiring and creatively recharging, so I wish I had time to do more of them.

8. This isn’t a question so much as a thank you for keeping us updated on everything going on in L.A. We appreciate your transparency and are so happy you’re as excited as we are about the prospect of a new adaptation!

Keep those fingers crossed! I am guardedly optimistic we might get something happening, but it is a slow, slow, slow process. We still have a lot of meetings to go through and nothing is certain.

‘The Trials of Apollo: The Tower of Nero’ by Rick Riordan publishes on September 29, 2020