We use cookies to ensure that we give you the best experience on Hypable. If you continue to visit us, we will assume that you are happy with it.
9:00 pm EST, February 16, 2020

Sassenachs rejoice— Outlander season 5 is officially upon us and it’s clear from the first episode back that we’re in for yet another wild ride!

Outlander’s season 4 finale left fans fretting over Murtagh’s (Duncan Lacroix) safety— especially after we witnessed the Red Coats riding up the road toward River Run to deliver a very poignant message to Jamie (Sam Heughan) regarding his marching orders from the Governor.

The danger lurking on the horizon, however, is more or less put on pause for a moment in the first episode back for Outlander season 5.

Instead, we’re offered up a sweet little palette cleanser as final preparations are made on Bree (Sophie Skelton) and Roger’s (Richard Rankin) wedding day. All in all, it’s a lovely way to return to Fraser’s Ridge — now having seen some sizable growth!

Bree and Roger’s wedding day is fairly significant in the books given that that’s also when the annual gathering of the Scottish clans takes place (more on this later!)

Even so, given how many moving parts there are in the series, the question was never whether we would see Bree and Roger’s wedding, but instead how much time the series would devote to the big day.

There’s no way the series could possibly showcase the entire lead-up to the nuptials, so overall, I feel as though the season opener condensed Bree and Roger’s wedding day quite nicely. It also offered up some unforgettable moments between Bree and both of her parents.

Jamie fretting over making sure he had something old, something new, something borrowed, something blue and a six pence for his daughter’s shoe was particularly adorable. As was of course his vulnerable confession of how he felt as though he wasn’t quite ready to give her away just yet.

On Claire’s (Caitriona Balfe) side, mother and daughter shared a lovely moment as she got Bree dressed to walk down the aisle.

While we were treated to a heartfelt conversation between Claire and Bree as Claire recalled not getting to have her mother present at either of her weddings, there was one small thing missing in this scene for me.

Specifically, I was surprised that there was no mention of Frank (Tobias Menzies) during this conversation.

It seems like such a small thing in the grand scheme of the moment, but at the same time, it would have been nice to have seen him brought up even in passing — if only because the series spent so much time focusing on Bree’s close bond with her other father in prior seasons. 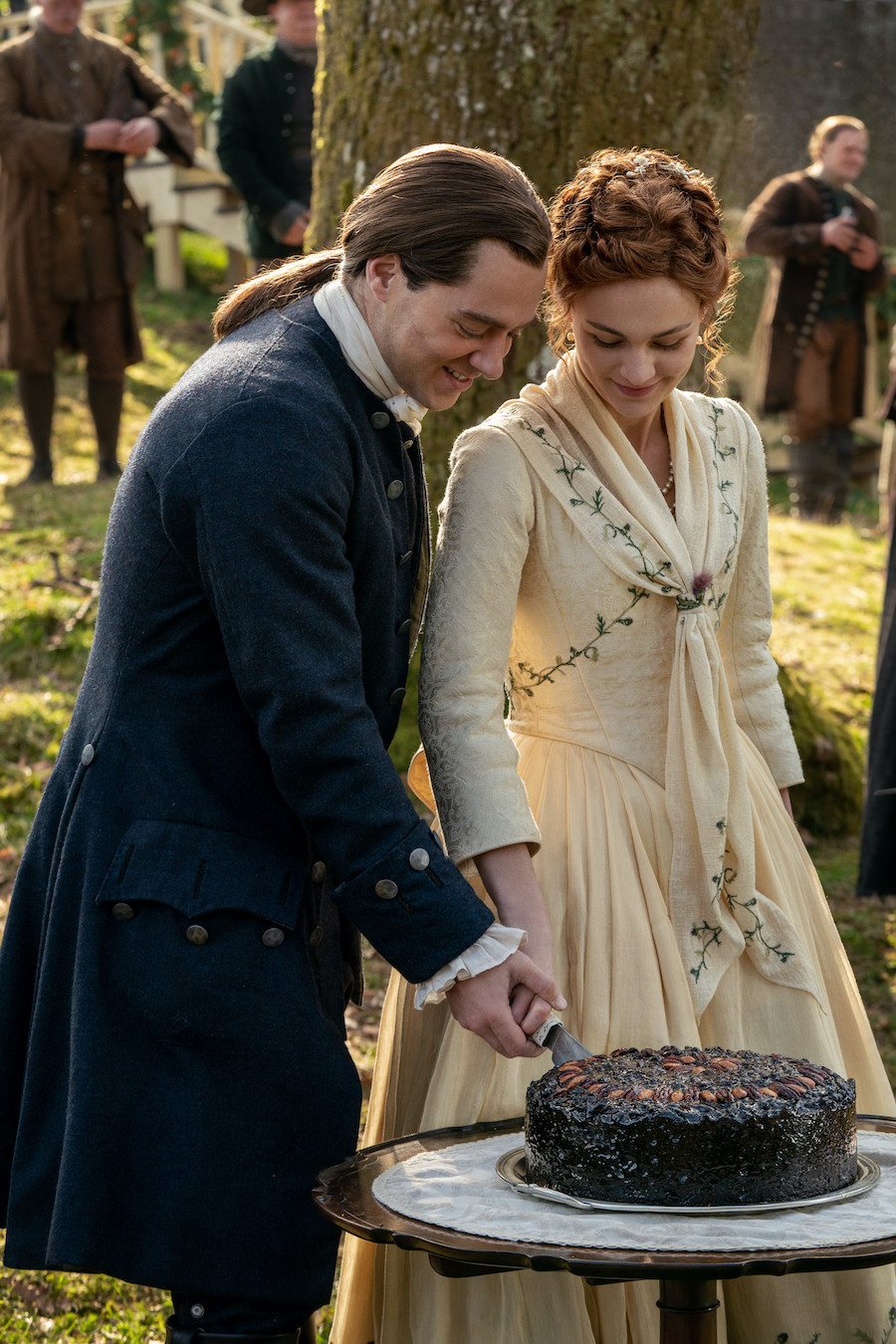 Though the series didn’t focus on some of the setbacks that take place as Bree and Roger plan their wedding (something that goes on for quite a number of pages in the book), it was fun to see that the writers left in a few digs about the fact that Bree and Roger opted for a Protestant wedding. The passing mention of Protestants vs. Catholics definitely served as a fun tongue-in-cheek reference that book readers surely enjoyed!

Wedding bliss didn’t overshadow some of the more serious matters that are still hanging over our favorite characters like a dark cloud.

First up, Bree accidentally overhears a conversation between Lord John Grey (David Berry) and her Da, wherein she finds herself cursed with the knowledge that the dreaded Stephen Bonnet (Ed Spielers) didn’t actually perish last season as the Frasers thought he had.

The knowledge also finds Bree subsequently slipping into a flashback of the night that Bonnet raped her.

As tough as it is to watch the moment play back, I think it’s great that Outlander has chosen to emphasize the fact that just because Bree is currently living a happy life with Roger, her son, and her parents, doesn’t mean that she’s not still haunted by her sexual assault.

Meanwhile, the episode also reminds of the fact that Jamie’s time to join the Red Coats is quickly drawing near after Governor Tryon himself shows up at the wedding.

Their short conversation also serves to clue us into the fact that Jamie has been trying his best to buy Murtagh more time since the last time the Red Coats showed up at River Run during the season 4 finale. Unfortunately for all involved, it seems as though the time for evading Tryon’s marching orders is over. 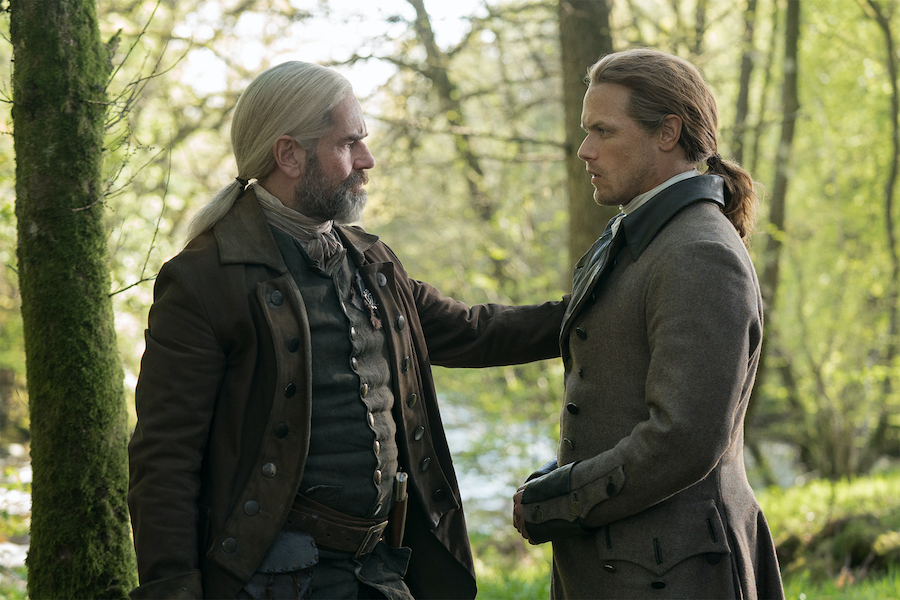 And speaking of Jamie’s godfather, Bree and Roger’s wedding may take center stage but it’s really Murtagh that lies at the heart of the season opener.

As with the previous season, the mystery of what will become of Murtagh as Outlander season 5 progresses is definitely a huge question on every fan’s mind — especially given that in the books, Murtagh didn’t live long enough to ever step foot in the colonies.

His presence is certainly one of the biggest divergences from Diana Gabaldon’s books, and there’s no denying it’s bound to continue changing the way that the rest of the characters go about reacting to what’s set to happen to them.

Even his ongoing fling with Aunt Jacosta (Maria Doyle Kennedy) offers up potential for the television series to veer away from cannon.

As the pair lay in bed together the night of Bree and Roger’s wedding, Jacosta brings up the fact that she’s received a marriage proposal from Duncan Innes — the man she actually does end up marrying in the books in an effort to ensure the continued safety of River Run.

At the same time, both characters are first and foremost incredibly practical, so the odds of Jacosta continuing on the path the books lay out for her seems more likely.

And of course there’s the fact that Jamie can’t delay setting out with the Red Coats in pursuit of Murtagh and the Regulators any longer. The result leads to a heartbreaking moment between Jamie and Murtagh in the woods where Jamie clues Murtagh into Tryon’s marching orders.

It would have been easy here for the series to include yet another verbal sparring match between Murtagh and Jamie as they argued over Murtagh’s involvement with the Regulators. That being said, I think the writers made a great choice to keep things civil between both characters — especially given that there’s no telling when they’ll see each other next.

Jamie releasing Murtagh from the vow he made to Ellen just before she died serves as a tragically beautiful bookend to the premiere episode — especially given the lovely flashback scene we were treated to right at the beginning featuring a young Jamie and a much younger Murtagh.

In true Outlander fashion, the series saved its most pivotal scene for last though, as I think we can all agree that Jamie lighting the fiery cross was by far one of the best scenes of the season opener.

Getting to see Jamie back in his kilt as he made an impassioned speech to all those in attendance for The Gathering at Fraser’s Ridge was a wonderful moment. But the thing that really made the fiery cross scene so fantastic was the moment in which Jamie called upon the men of the Ridge to step forth and pledge their loyalty to him.

As a fan, it’s impossible to watch that scene and not think back to Outlander’s first season where Claire looked on as one by one, men stepped up to pledge their loyalty to Colum MacKenzie at Castle Leoch. Or perhaps to reminisce over an impassioned Jamie repeating that same oath to Claire later on during the series’ first season — it’s moments like this where Outlander as a series truly shines its brightest.