Hagrid’s Magical Creatures Motorbike Adventure opens this Thursday, June 13 at The Wizarding World of Harry Potter: Hogsmeade, and it’s a delightful experience. Featuring seven launches, high speeds, tons of twists, and Hagrid as your traveling companion, the ride is packed with surprises, happiness, and tech that will leave you floored. 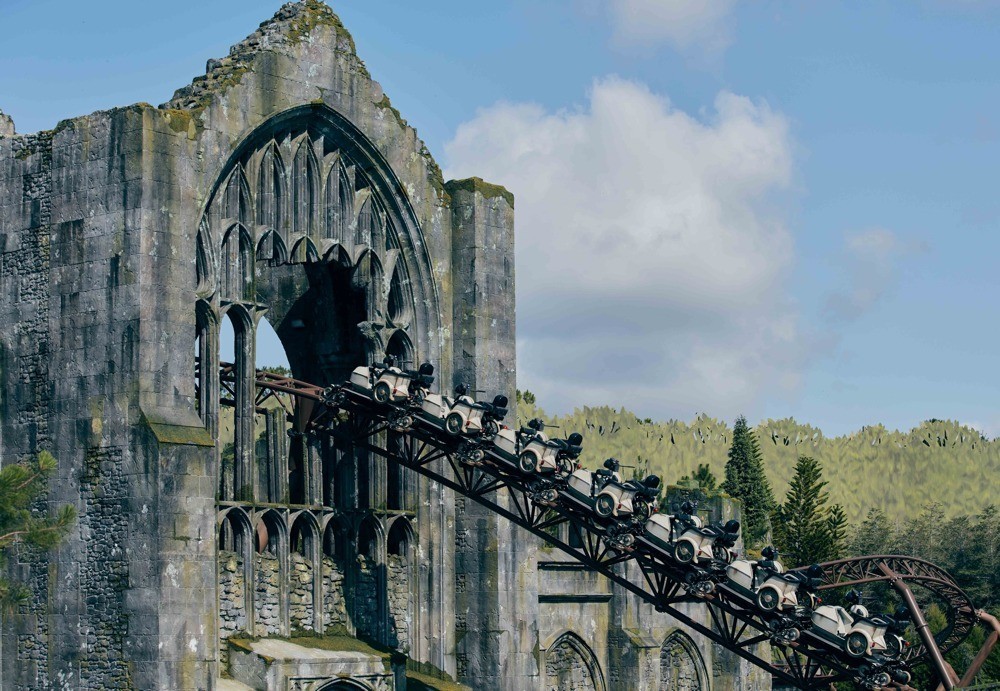 The ride vehicles are a set of motorbikes and sidecars. Before boarding, an employee will ask you who’s taking the bike and who’s sitting in the sidecar. The motorbike passenger will be sitting a little higher than the sidecar passenger and has handlebars to hold onto. If you’re in the sidecar, you can cling onto your safety bar.

It’s not Harry Potter if there isn’t a story of some sort, and this one is simpler than the nuttiness found within Forbidden Journey and Escape from Gringotts. In Motorbike Adventure you’re a student of Hagrid’s who’s heading into the Forbidden Forest for a lesson. A pre-show scene finds Robbie Coltrane and Mark Williams reprising their roles as Hagrid and Arthur, getting your motorbikes ready for flight. It’s a lengthy, fun, and eventful scene.

Unlike Forbidden Journey and Escape from Gringotts, Motorbike Adventure has no villains and — thankfully — no video screens (save for the pre-show). This is just a fun coaster with practical effects taking you through the Hogwarts grounds. You’ll encounter a handful of creatures: A centaur, a unicorn, Fluffy, Cornish Pixies, and a Blast-Ended Skrewt.

This ride marks the first time we’re seeing the Blast-Ended Skrewt. Though it was mentioned in the books, it never appeared in the movies. The very large creature stands beside an animatronic Hagrid early on in the ride and spits something colorful at you.

Over the course of the three-minute experience you’re zooming around 7-acres at high speeds with great twists, inclines and dives, encountering the aforementioned creatures as Hagrid remedies a few magical hiccups.

The ride is an amazing accomplishment in numerous ways. It boasts nearly a mile of track, making it the longest roller coaster in Florida. As if that weren’t enough to make the wait in line worth it, Motorbike Adventure features a 17 foot free-fall — the first coaster in the U.S. to offer the unexpected drop — and an ascent of 65 feet into the air before your motorbike goes backwards and twists around a corner.

It’s all so seamless that you can’t help but be impressed by how it works. For example, there’s no delay in between ascending straight into the air and then letting gravity slide you back down… onto a different track than the one you launched from. In the drop-track scene, there’s no audible warning from the coaster’s mechanics to prepare you for the fall. And this is all happening while other coasters (five or so) are somewhere else on the circuit. The nerd in me just can’t stop thinking about how they managed to pull this off.

A second ride-through at night made me love the ride even more. For this run I took the motorbike, and for some reason it’s better than the sidecar. I think it has to do with sitting up higher.

I also discovered that a nighttime ride is a lot more thrilling than one in the daytime. It feels more like you’re cruising through the Forbidden Forest, and seeing the motorbikes’ headlights illuminating the way is something special. You also get some great views of Hogwarts and Hogsmeade all lit up.

In addition, I noticed that there are at least two areas where just when you think the coaster can’t go faster, it kicks into a higher gear. Motorbike Adventure is a non-stop thrill.

Universal puts a lot of emphasis on marketing the parks to kids, and there’s another Hagrid-themed ride, Flight of The Hippogriff, that is definitely geared more towards a younger audience. The theme park describes Magical Creatures Motorbike Adventure as a ride for people of all ages, and I definitely agree with that. It toes the line between being fast and exciting, yet friendly.

It’s not scary and it doesn’t have any vertical loops, but the ride pairs high speeds and twists for thrills. It doesn’t jerk you around in an uncomfortable way — it’s all so smooth that you’ll feel like you’re in a sports car. It also has that aforementioned free-fall, but it’s so quick that it’s over before you realize what’s happening.

Motorbike Adventure is Flight of the Hippogriff on a ton of steroids. Anyone comfortable riding Flight, or Disney coasters like Space Mountain, should get in line for Motorbike Adventure and just look forward to way more excitement.

Like Hogsmeade’s Forbidden Journey, and to a lesser extent Diagon Alley’s Escape from Gringotts, there’s plenty to look at while you’re waiting in line.

Outside you’ll find expansive views of the ride, earthy-looking animal sculptures, and some nice views of Hogwarts. You’ll also be walking by the backside of Hagrid’s Hut (the front side is viewable from Flight of the Hippogriff). 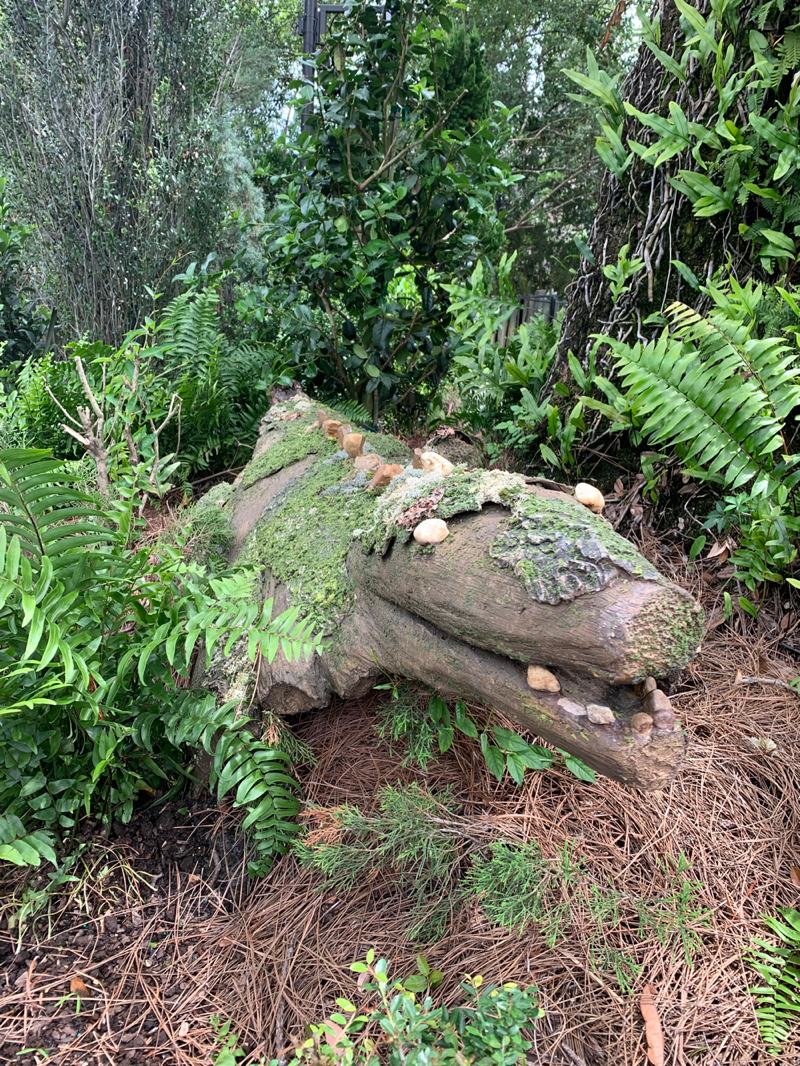 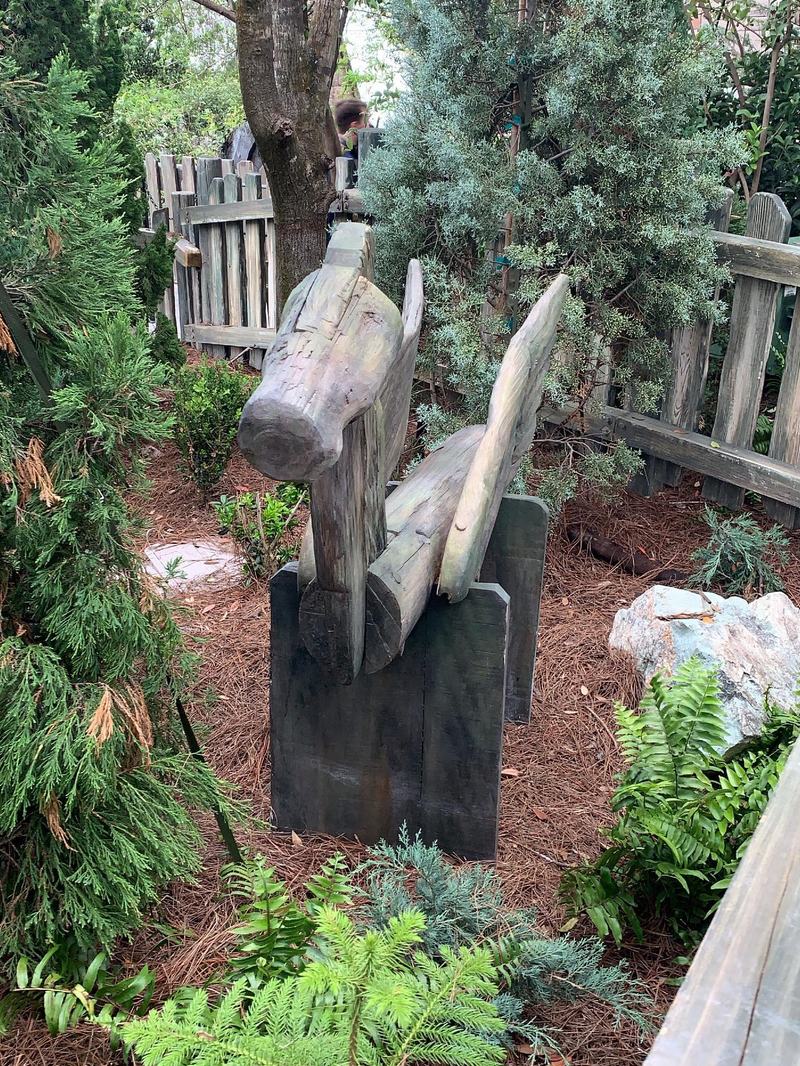 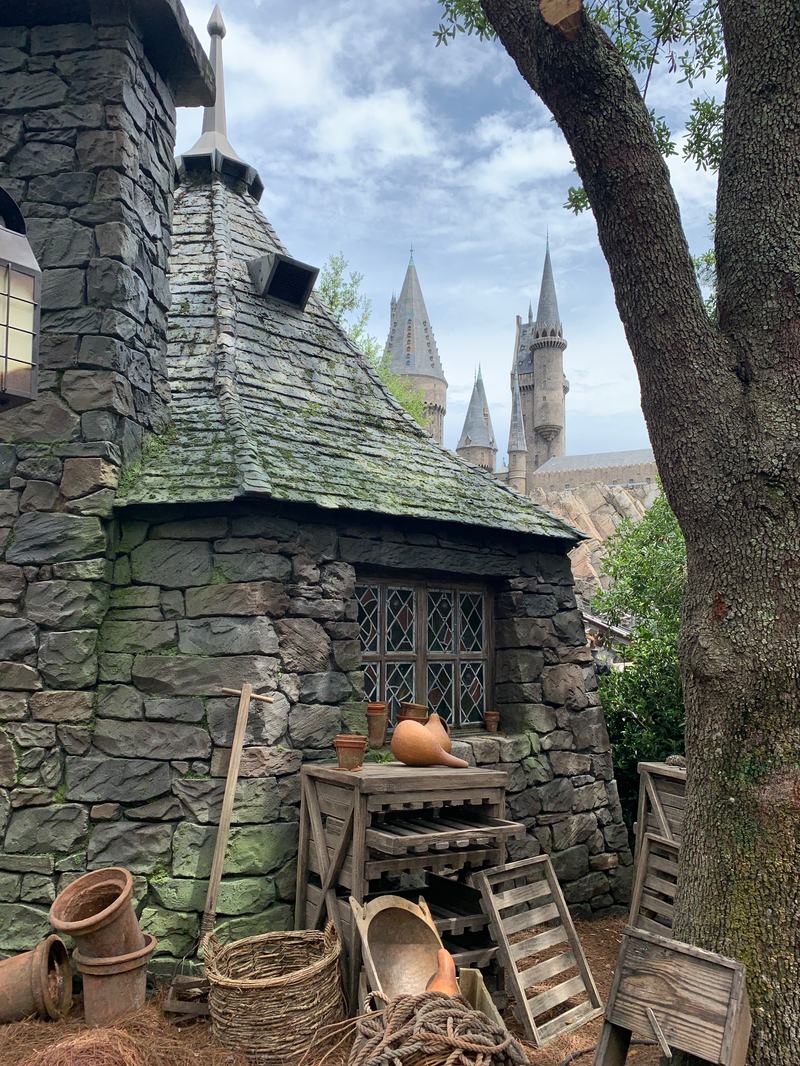 Inside, Hagrid’s queue does not feature rooms that appear in the books or films. Universal’s line is that the scenes “appear to have been abandoned for centuries behind Hagrid’s hut.”

Indeed, they do feel like ruins. The queue is littered with weathered writing and artwork that looks like it’s been there for a long time. Below, it looks like a student snuck in to write “I <3 hufflepuff," while someone else wrote the ravenclaw ethos, "wit beyond measure is man's greatest treasure": 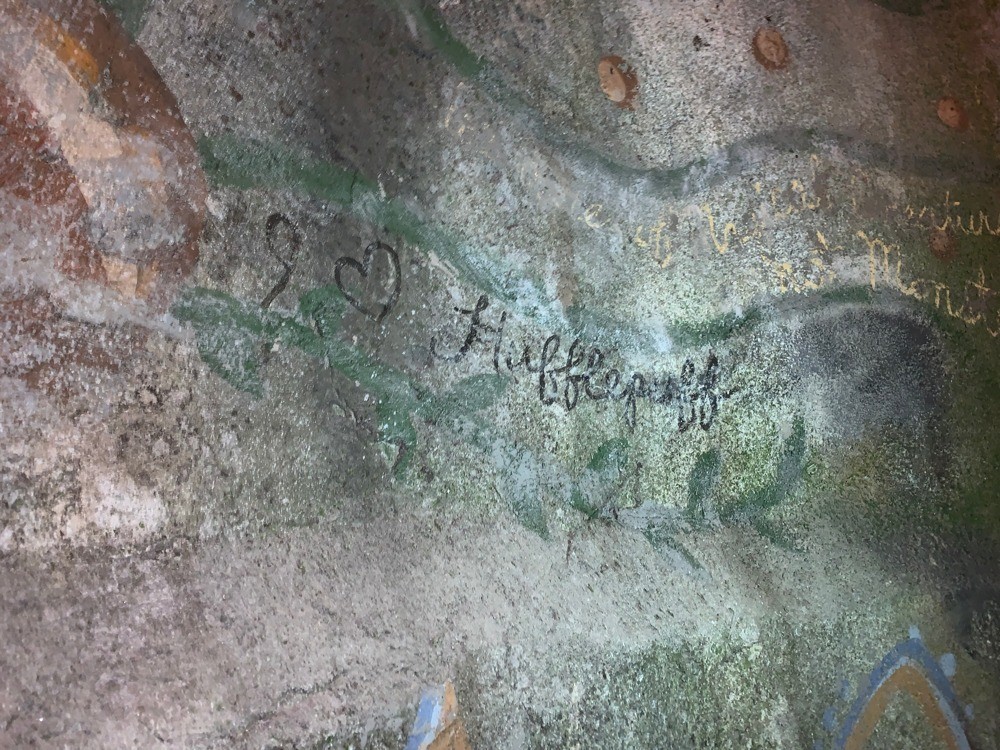 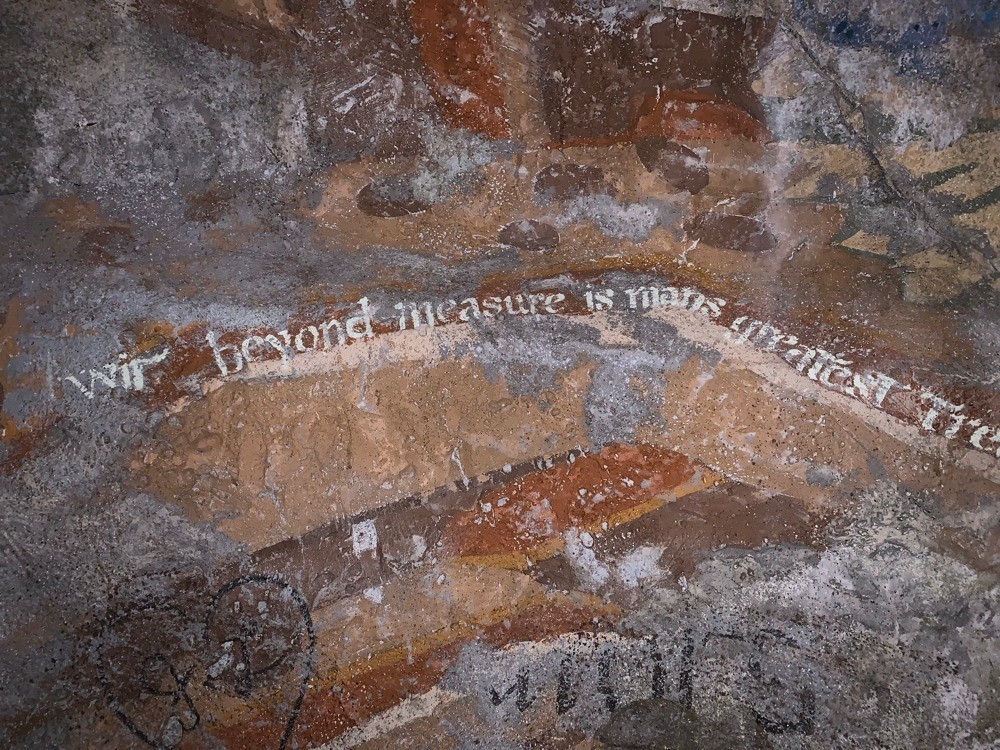 There’s plenty more inscribed on the walls, but some of it is impossible to make out. It makes you wonder if there are some really cool or important pieces of canon hidden on these walls.

The painted artwork is easier to make out. The latter photo below doubles as a reference to the ride that once stood in the same spot, Dueling Dragons. 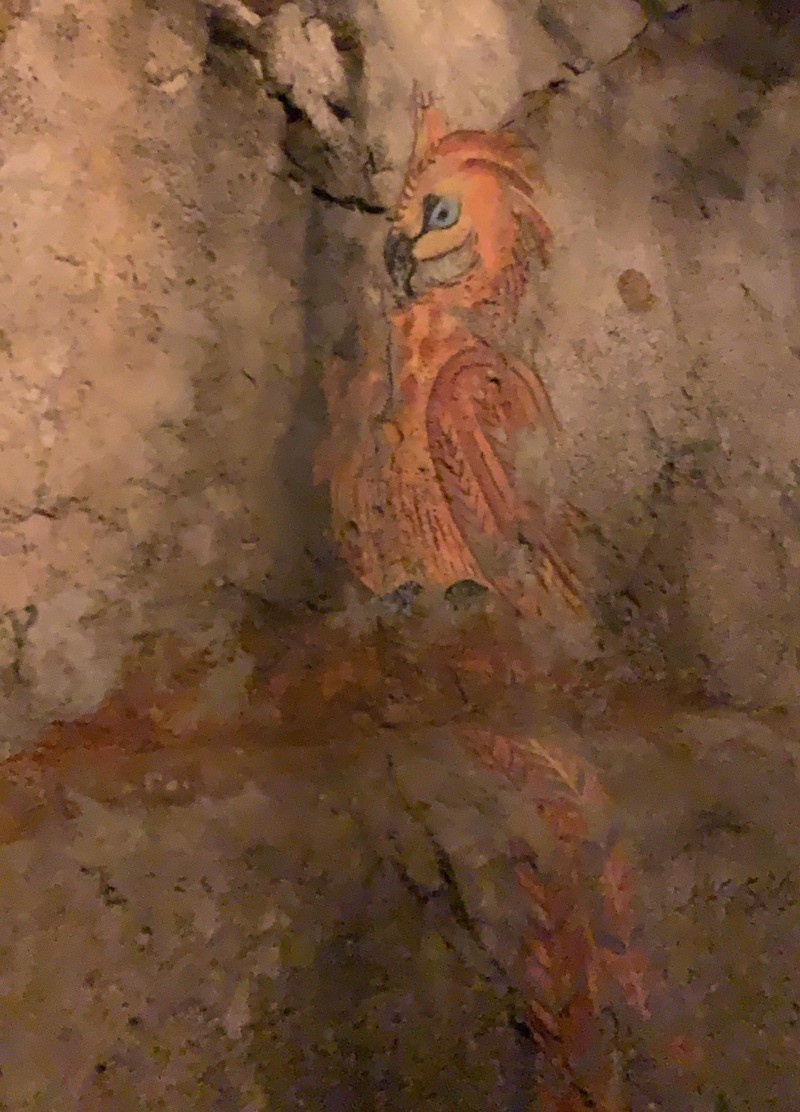 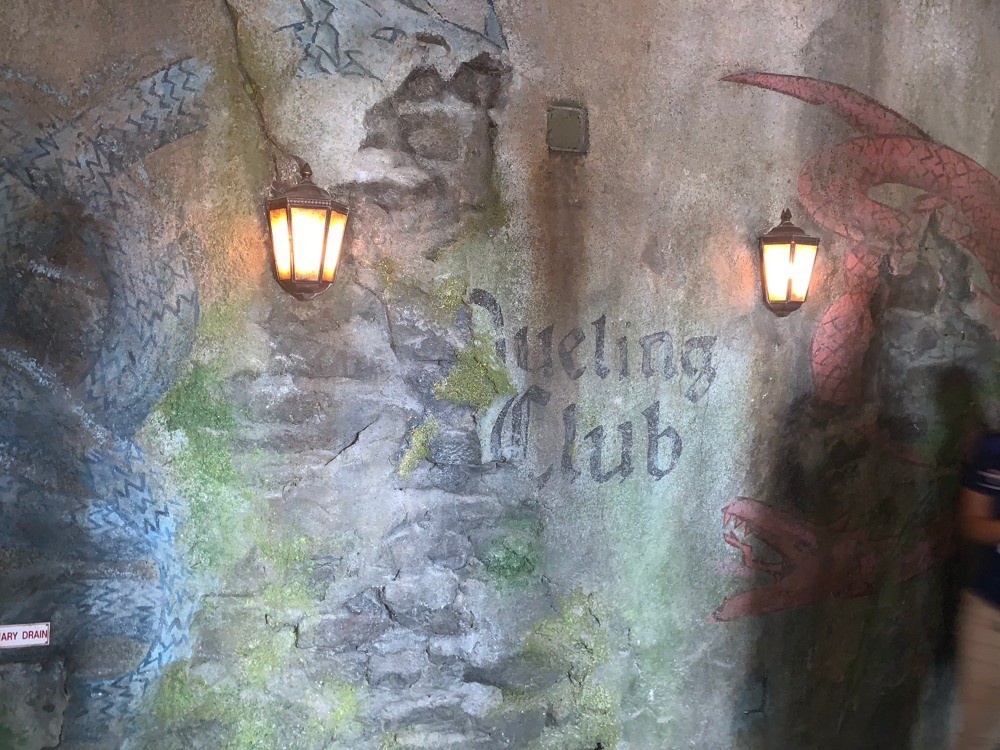 In one of the more detailed rooms, you’ll find a couple open copies of A Monster Book of Monsters, massive gloves, and posters depicting lots of familiar creatures. It’s also the room where Hagrid appears to have birthed the highly illegal Blast-Ended Skrewt. Notice that the two posters above his workbench display the two creatures that he made the Blast-Ended Skrewt out of: Manticores and Fire Crabs. 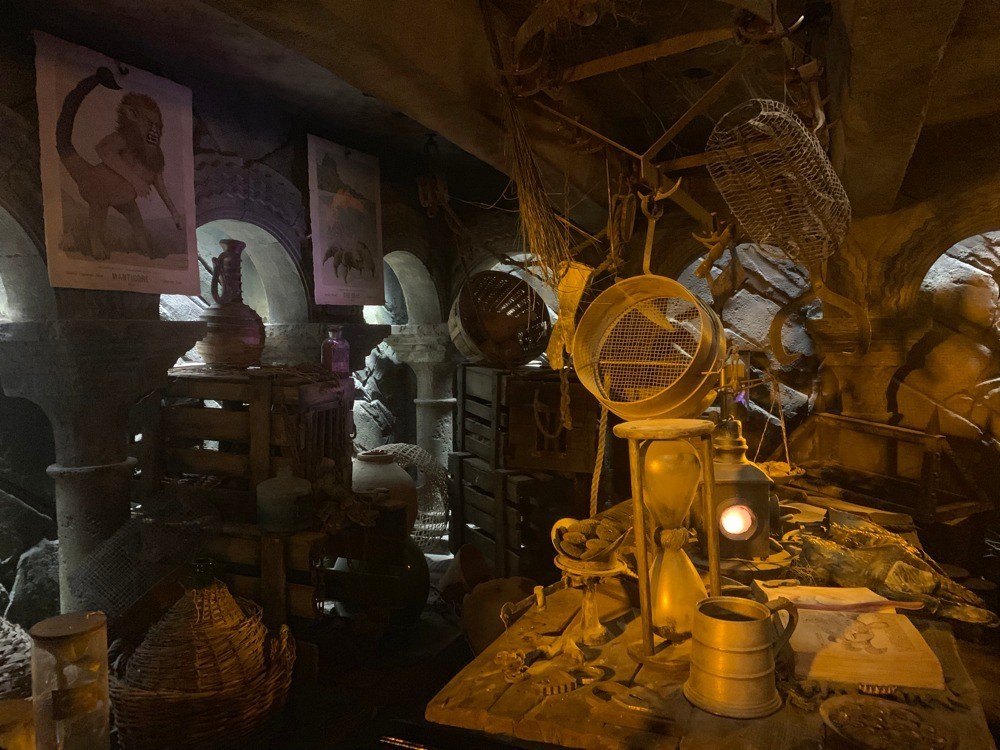 This room also has two references to the Fantastic Beasts book and film series: Posters for a Niffler and a Salamander. 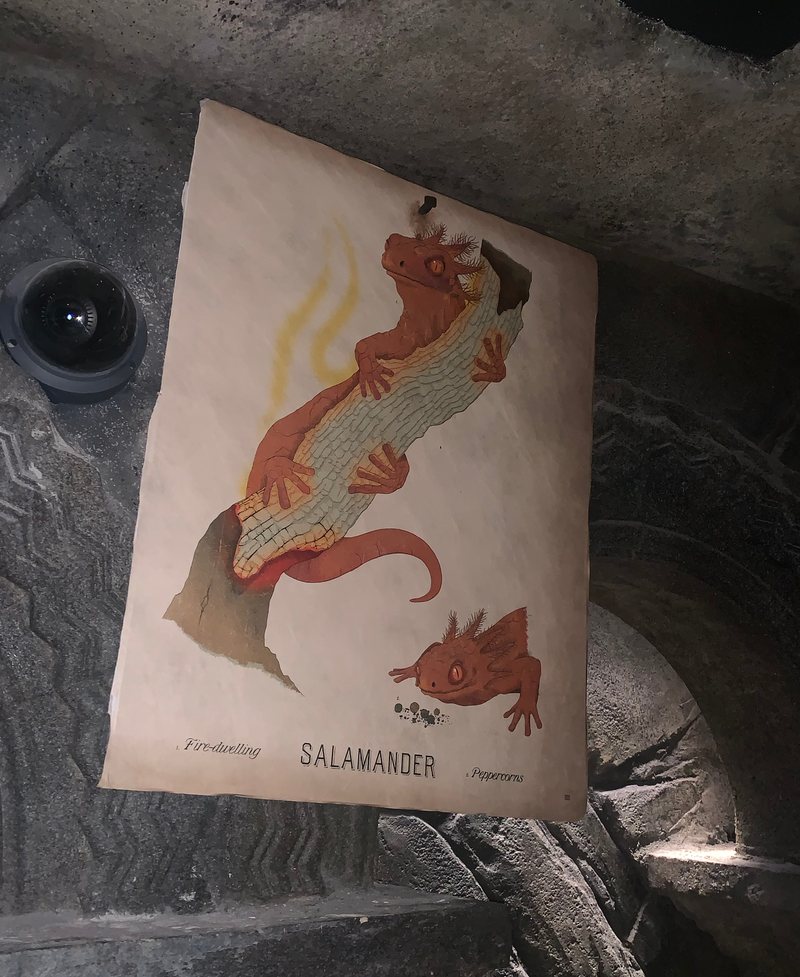 While one could argue that these creatures exist in the Harry Potter series as well, I have to think they’re a subtle nod to the new series. It’s significant, because as far as I know they’re the only references to the Newt-led spinoff in the parks. The Wizarding World of Harry Potter lands are strictly set within the Harry Potter timeline.

I’ve no complaints whatsoever about the ride, but I do have a couple of concerns about things before it. The queue is dark. Like, really dark. At a couple of points it’s nearly pitch black, and I can’t help but wonder why it has to be that way.

The darkness means you have to work extra hard to spot Easter eggs. Some you may miss simply because there isn’t enough light to notice them. And when the line is filled with people, it’ll be even more difficult.

Another potential problem is the lockers. Both Gringotts and Forbidden Journey have way-too-small locker areas that are frequently jammed with people, and it looks like Motorbike Adventure’s locker room may be a similar situation. Riders must deposit their bags in these lockers because there’s no on-vehicle storage. One key difference with the locker area at Hagrid’s is that both of its entrance/exit points connect to large outside areas, so hopefully it’s less of an issue than it is at the other big attractions.

Hagrid’s Magical Creatures Motorbike Adventure is a can’t-miss ride and a remarkable achievement. It raises the bar for roller coasters and exceeds the standard that Universal has set for themselves when it comes to the Wizarding World lands. Stay tuned for more thoughts here and on the next episode of MuggleCast!

Perfectly timed with the opening of The Wizarding World’s newest attraction are the launch of two other offerings: Universal’s Endless Summer Resort: Surfside Inn & Suites, and a new restaurant at CityWalk called Bigfire.

Endless Summer is Universal’s most affordable property yet, running only $111 per night for a 7 night stay in a 2-bedroom suite. Like all Universal properties, staying at this hotel comes with benefits like complimentary transportation to the parks and early admission at The Wizarding World of Harry Potter. 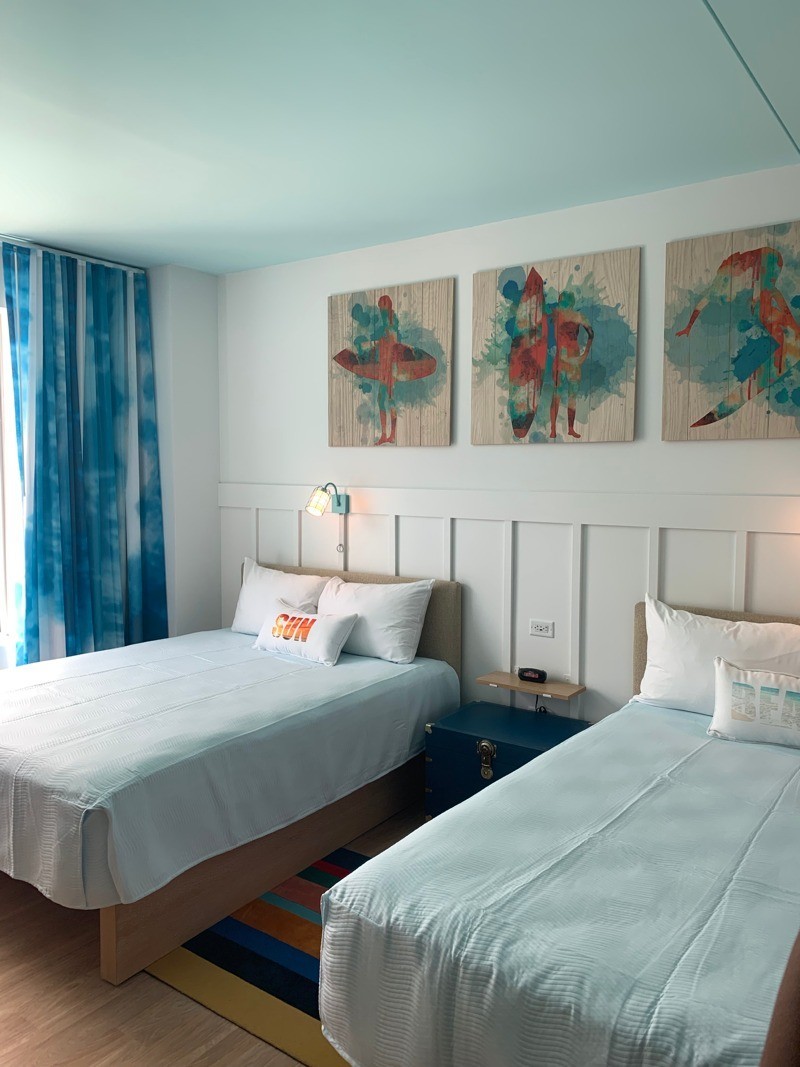 We had the opportunity to explore the rooms and found them to be beach-y, air-y, modern, and great quality for a hotel in the value category. It’s hard to imagine how competitors could top Endless Summer, so you’ll want to take a look at this resort first before thinking about others.

The room prices aren’t the only affordable offerings at Endless Summer, which opens June 27: All entrees and drinks are no more than $9 per item.

Notably, both the rooms and the resort areas are filled with USB and USB-C ports (the latter is a newer USB format that powers things like the Nintendo Switch, modern MacBooks, iPad Pros, and several Android devices). This nerd is impressed that Universal went so far as to offer USB-C in its walls — that’s something you don’t see anywhere yet. Like the amenities offered in their second newest hotel Aventura, it’s clear that Universal and their partners at Loews are being forward-thinking when designing these properties. 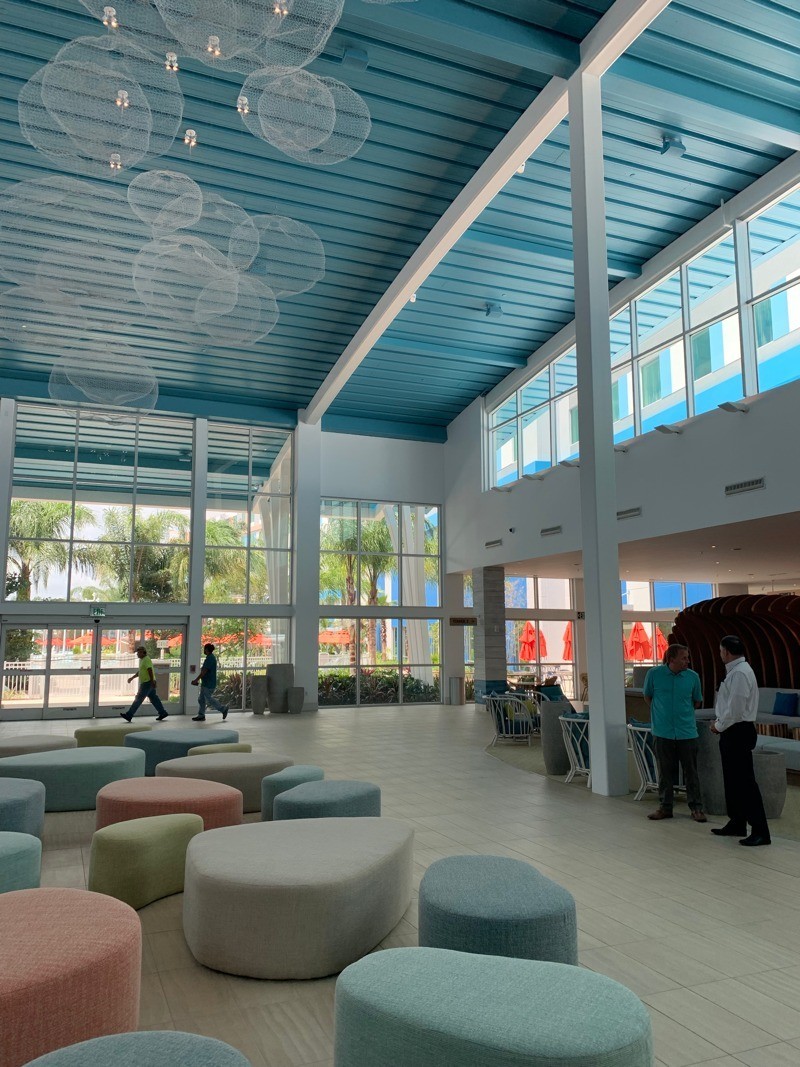 Endless Summer Surfside is just one part of Universal’s value hotel plan. Next year they will open a sister hotel across the street, Endless Summer Dockside, which will boast more than double the number of rooms that Surfside has. 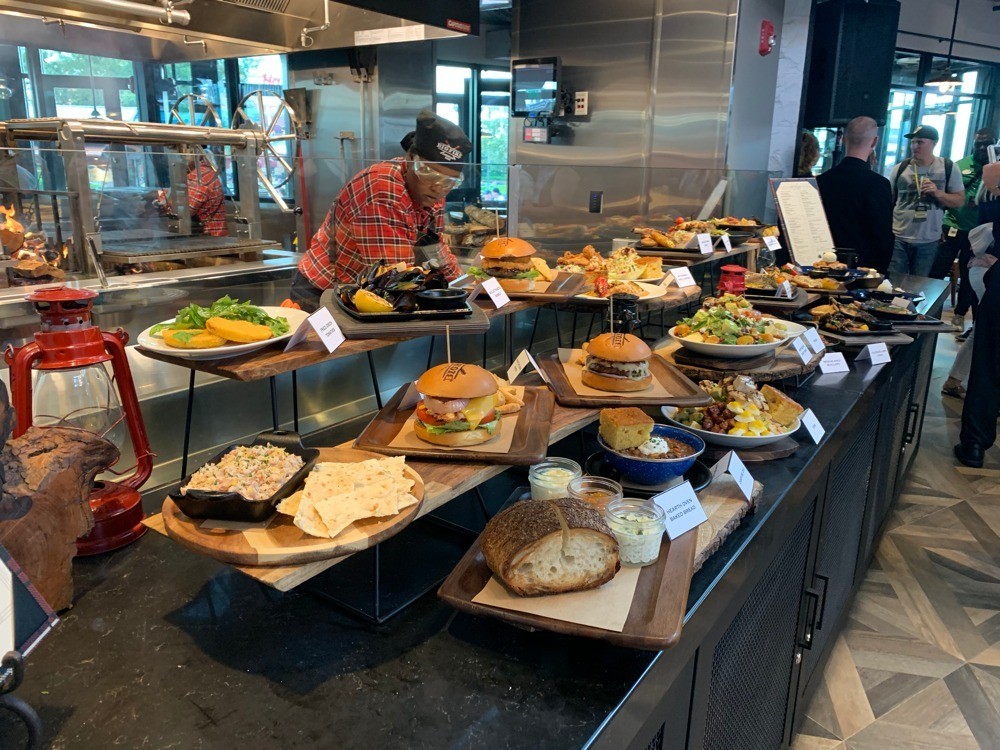 Meanwhile over at Citywalk, Bigfire serves American fare and wants to invoke the feeling of family togetherness at your favorite lake (in this case, the gorgeous waterway that runs through CityWalk). The food and unique drinks were delicious and the atmosphere was great. It’s prime location in CityWalk should make it a big hit.