‘Grey’s Anatomy’ season 16 is throwing DeLuca under the bus

‘Grey’s Anatomy’ season 16 is throwing DeLuca under the bus

Lately, Grey’s Anatomy season 16 has me questioning if I want to keep watching — especially with the way they’ve been treating DeLuca.

At the start of Grey’s Anatomy season 16, everything between Meredith and DeLuca was fine. Great, even! Despite Meredith’s career in jeopardy at that point, they seemed to have made a big leap in their relationship after DeLuca literally went to jail for her. He even started to help her out around the house more as she started serving her community service. It seemed like they were moving into a very serious stage of their relationship.

Then it all started to go downhill when DeLuca disagreed with Meredith’s inability to stay out of trouble while she was waiting to see what would happen with her medical license. Meredith saw it as a sign that he didn’t really understand her, while DeLuca was worried she was being self-destructive.

It was the first sign of issues in their relationship that could have been caused by their age difference. At the same time, fans learned that Richard Flood was being added to the Grey’s Anatomy season 16 cast, and perhaps that should have been a big red flag as to what was coming in the rest of the season.

Then came the breakup, or not break up, depending on who you asked. DeLuca got worried about whether or not he and Meredith were true equals in their relationship and asked her to think about what she wanted.

Meredith took this to mean that he had broken up with her, but she had also admitted to her sisters that she wasn’t sure if their relationship made sense in the long-run. Even though everyone told DeLuca he had made a mistake, maybe he wasn’t that far off from what was really going on in Meredith’s head?

After this, their relationship was never really the same. It didn’t help that the writers were clearly slowly pushing Meredith and Hayes closer together, showing how many similarities they had from raising children after losing their spouses.

Although this was frustrating as someone who loved Meredith and DeLuca together, I got it because at the end of the day having an age gap in a relationship can cause a lot of differences. 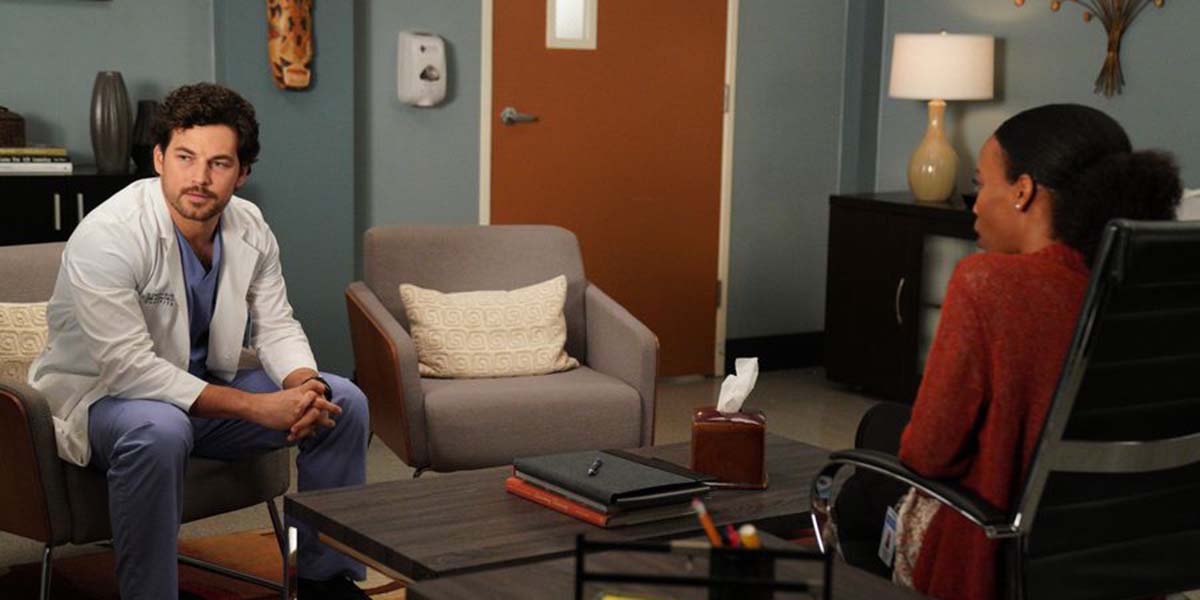 What I do take issue with, however, is how Grey’s Anatomy season 16 has begun to portray DeLuca in what seems to be an effort to drive him further away from Meredith. They began to show DeLuca as someone who was going off the rails suddenly, leaving his sister Carina and Meredith to wonder if his behaviors were manic. The show opened up the possibility of DeLuca having inherited the same mental illness as his father.

To be clear, I never take issue with Grey’s Anatomy shedding light on mental illness. It’s actually one of the things I love about the show. They constantly tackle real-life issues in a way that is relatable and usually very accurate.

In this case, though, I do have a problem with them giving DeLuca a mental illness if the point is to make him less of a candidate for Meredith to be with. That’s how DeLuca’s storyline is coming across to me and, I’m assuming, others as well.

In Grey’s Anatomy season 16, episode 18, “Give A Little Bit,” the writers continued to push the idea that DeLuca might have started to lose his grip on reality. The doctor spent the entire episode with one patient he was convinced was a victim of human trafficking. The only problem was that no one else seemed to believe that was the case. Neither the nurse helping him in the clinic nor Bailey thought anything weird was going on despite his concerns.

Feeling like no one was listening to him, DeLuca ended up trying to lie his way into getting the patient away from her “aunt,” which led to an outburst where he confronted her about it and had everyone convinced that he was the one being dangerous. DeLuca had to be led away by security only for it later to be revealed that he was right, but since everyone was convinced he was the one with issues, he got suspended.

This left me wondering what the point of DeLuca’s whole storyline is. Is DeLuca actually suffering from a mental illness like his father or not? Is the show just making him act this way so Meredith doesn’t want to be with him, or are they really trying to teach us a bigger lesson about mental health?

I’m not sure where this storyline is going, but with how other things are being handled on the show as well, I’m concerned this is just another sloppy mess.

If all they are really trying to do is separate Meredith and DeLuca, they could have done it without changing his character so drastically. If they are, in fact, trying to show a character dealing with manic episodes, then I hope they will be careful with how they portray it.

As of right now, I’m not happy with how this storyline is going, but I’m always hopeful Grey’s Anatomy can turn it around.

What do you think of DeLuca’s development on ‘Grey’s Anatomy’ season 16, episode 18, ‘Give A Little Bit’?