We use cookies to ensure that we give you the best experience on Hypable. If you continue to visit us, we will assume that you are happy with it.
11:05 am EDT, June 29, 2021

Good Omens season 2 is on its way. It was announced today that the BBC/Amazon adaptation of the beloved novel by Neil Gaiman and the late Sir Terry Pratchett is coming back, with more adventures afoot for Aziraphale and Crowley.

In a statement from the BBC, it’s confirmed that book’s co-author Neil Gaiman and Good Omens season 1 director Douglas Mackinnon will serve as showrunners, with Gaiman being joined by British writer and actor John Finnemore, perhaps best known for creating the popular radio drama Cabin Pressure, in writing duties. Stars Michael Sheen and David Tennant will of course return as Aziraphale and Crowley, the angel and demon who team up to save the world that they love from the Apocalypse planned by their respective head offices.

Ineffable? Perhaps. Despite the show’s explosive success, more Good Omens never felt like a sure thing. In its initial six episodes, Good Omens completely encapsulated the story of the novel, serving as a standalone complete adaptation, wildly well-received by both the book’s 30 year fan base and newcomers alike. But in the two years since the series was released, the tone of conversation about a continuation changed from “no, this was always meant to be it,” to “well, never say never… there is material for it.”

The cast and creator’s embracement of fandom passion for the series, and the ongoing friendship antics between stars Michael Sheen and David Tennant (like their two-season lockdown Zoom-based comedy Staged) have helped to keep the enthusiasm for all things Good Omens alive, and Gaiman even wrote an adorable script for a short, voice-acted video of Aziraphale and Crowley in lockdown last year.

Most importantly, Gaiman has always been candid about the fact that a sequel to the Good Omens novel, tentatively titled 668: The Neighbor of The Beast, was planned by him and co-author Terry Pratchett, and in a statement for the BBC, Gaiman explained how that unwritten draft served as the inspiration for a Good Omens season 2:

“It’s thirty-one years since ‘Good Omens’ was published, which means it’s thirty-two years since Terry Pratchett and I lay in our respective beds in a Seattle hotel room at a World Fantasy Convention, and plotted the sequel. I got to use bits of the sequel in Good Omens — that’s where our angels came from. Terry’s not here any longer, but when he was, we had talked about what we wanted to do with ‘Good Omens,’ and where the story went next. And now, thanks to BBC Studios and Amazon, I get to take it there. I have enlisted some wonderful collaborators, and John Finnemore has come on board to carry the torch with me. There are so many questions people have asked about what happened next (and also, what happened before) to our favourite Angel and Demon. Here are the answers you’ve been hoping for. We are back in Soho, and all through time and space, solving a mystery, which starts with an angel wandering through Soho, with no memory.”

Rob Wilkins, who serves as the representative of Pratchett’s estate and was an executive producer on Good Omens season 1, added this: “Terry and Neil always knew that Crowley and Aziraphale wouldn’t remain content to appear in only one story, and long harboured plans to expand upon their adventures. David and Michael’s stellar performances made this an absolute necessity. Terry would have been delighted with how they brought their characters to life, and just as delighted as I am that a second season is now underway.” 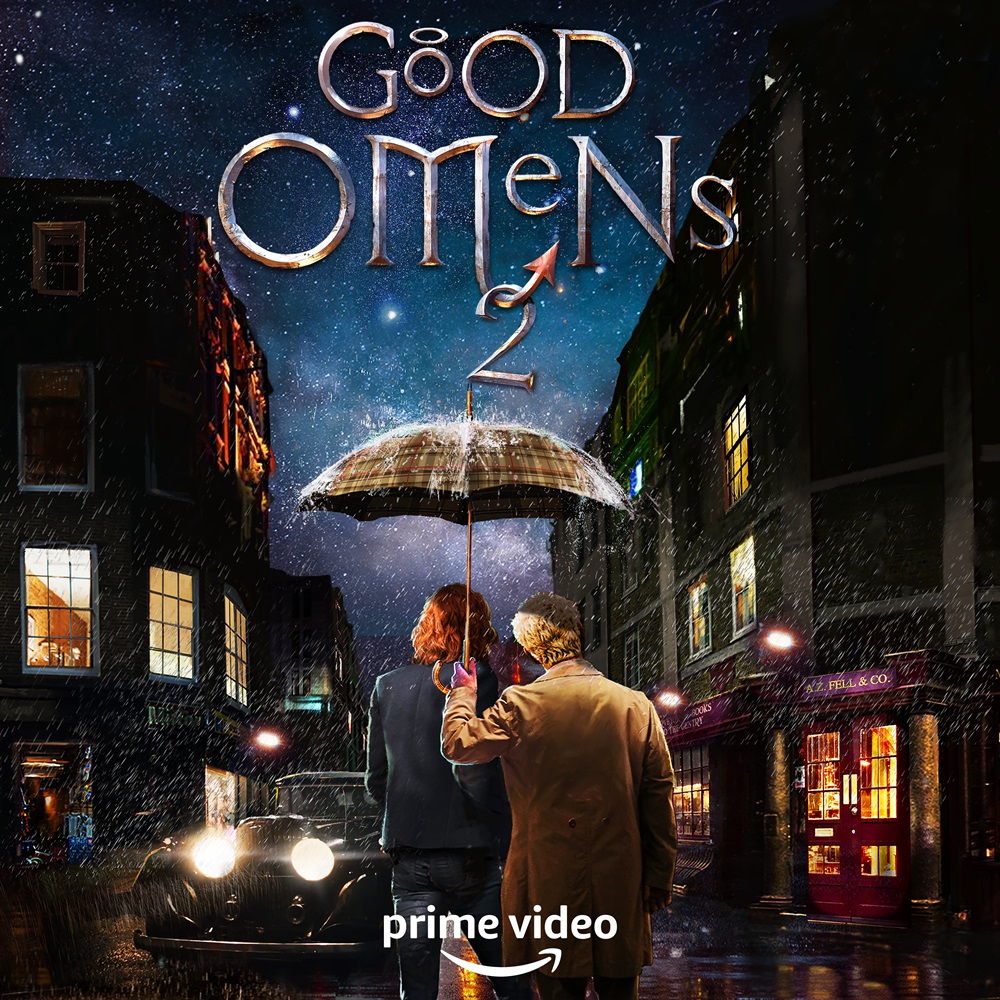 The beautiful key art released for the announcement shows the two leads on a rainy night in Soho, London, with Aziraphale shielding Crowley with a tartan umbrella – a callback to their first meeting in Eden, when Aziraphale used his wing to shelter Crowley from the first rain. Crowley’s classic Bentley and Aziraphale’s antiquarian bookshop are seen in the background. By the way, Neil, how are you feeling now about burning the shop down in season 1?

The fact that Good Omens season 2 is directly inspired by the plans that Pratchett and Gaiman made together is probably the most important element of any continuation. Good Omens famously had a long and arduous journey from page to screen since its publication in 1990, and when Pratchett’s health began to fail after he was diagnosed with early-onset Alzheimer’s, it seemed likely that it would never come to life, as Gaiman simply did not want to work on it by himself. “Terry and I had a deal that we would only work on Good Omens things together,” he explained. “Everything that was ever written – bookmarks and tiny little things – we would always collaborate, everything was a collaboration. So, obviously, no.”

However, it was Pratchett himself who convinced Gaiman to take the reins, in what Gaiman calls ‘sort of a last request.’ “At that point, I think I said, ‘You bastard, yes,’” he told the audience at a Terry Pratchett memorial, and later shared Pratchett’s words on the matter — “I would very much like this to happen, and I know, Neil, that you’re very very busy, but no one else could ever do it with the passion that we share for the old girl. I wish I could be more involved and I will help in any way I can.”

And so Gaiman wrote the show with Pratchett in mind, and worked as showrunner to make sure he was honoring the choices that he thought Pratchett would make. The same, presumably, can be said of season 2, in terms of harking back to the existing sequel material that has lived in the authors’ heads since 1989. “Terry was clear on what he wanted from Good Omens on the telly. He wanted the story told, and if that worked, he wanted the rest of the story told,” Gaiman said in a blog post today.

Good Omens season 2 will begin filming in Scotland later this year – on his blog, Gaiman revealed that sets are already being built. Skye-born Douglas Mackinnon is looking forward to utilizing the beauty of his homeland: “Taking Good Omens to my home country of Scotland to film a second season is an exciting dream come true for me. And with Michael Sheen and David Tennant returning as Aziraphale and Crowley, we really have an angel and a demon on our side.”

As for the stars themselves, David Tennant says “The return of Good Omens is great news for me, personally. As I get to work with Michael again, and I get to say Neil’s wonderful words once more. It’s probably less good for the universe as it almost certainly means there will be some fresh existential threat to its existence to deal with, but, you know – swings and roundabouts…” whereas Michael Sheen took a more grudging tone: “Personally I’m against it, but the world isn’t going to just save itself, is it? If David and I can manage to not fall out too badly this time it may even have a chance of getting finished.” (Again, please view BBC’s Staged for more examples of the duo’s optimist/pessimist sunshine one/grumpy one friendship personas.) 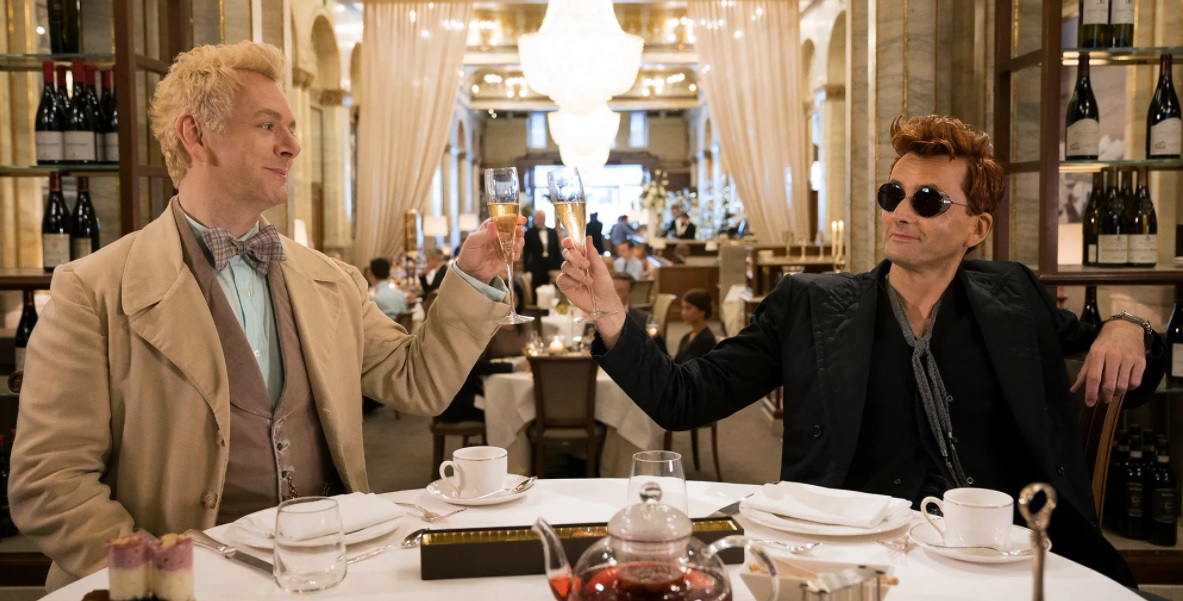 While the new adventure of the amnesiac angel is curious, and seeing how Crowley and Aziraphale’s friendship has developed since the events of season 1 – especially after the tomes of queer love story discourse on the subject – is thrilling, I get a feeling that the most anticipated element of Good Omens season 2 will be the promise of more glimpses of the pair’s many meetings over the years.

Episode 3 of Good Omens season 1, entitled “Hard Times,” featured a non-book-canon series of vignettes showing a handful of incidents over the past 6000 years in which the bond between the angel and demon had blossomed. It won the Ray Bradbury Award for Outstanding Dramatic Presentation at the Nebula awards, and that concept – looking back in on Crowley and Aziraphale throughout all of time – has been the a very popular idea for more Good Omens from the fandom, even from those who weren’t certain they wanted a continuation beyond the events of the book. There is a lot of history to revisit, and if a Good Omens continuation was made up sheerly of flashbacks, many fans would be more than happy with that alone.

But Gaiman has stated before that quite a few ideas from the Good Omens sequel influenced the making of Good Omens season 1, especially the scenes of the other angels, heaven and hell, and the instigators of Armageddon – things we never actually saw in the book. Is Apocalypse 2.0 on the table? We hope to find out more very soon.