The highly-anticipated release of Stephenie Meyer’s Midnight Sun arrives on August 4, 2020, and Hypable has an exclusive quote from the new book!

Midnight Sun is one of the only good things happening in 2020. The book, which is Twilight but from Edward Cullen’s perspective, has been teased for years by Meyer. Given how much time has passed since the Saga wrapped, many fans assumed it would never arrive, even though Meyer had teased otherwise.

But the book is on the way, and to get you even more excited for Midnight Sun, Hypable has an exclusive quote from the book.

In this scene we see Edward debating whether he should spook a couple of gentlemen in his presence, but ultimately deciding against it. 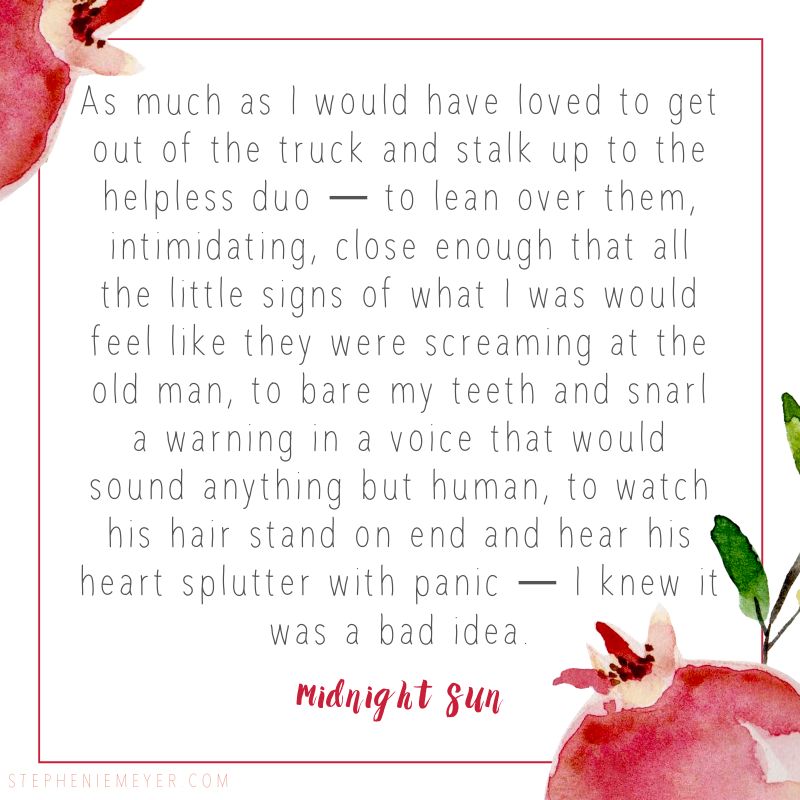 The quote reads, “As much as I would have loved to get out of the truck and stalk up to the helpless duo — to lean over them, intimidating, close enough that all the little signs of what I was would feel like they were screaming at the old man, to bare my teeth and snarl a warning in a voice that would sound anything but human, to watch his hair stand on end and hear his heart splutter with panic — I knew it was a bad idea.”

We don’t have official confirmation of what scene this is in Twilight, but it could be when Edward and Bella arrive at the Cullen house to find Jacob and Billy Black already at the residence.

You can read more quotes from Midnight Sun over on Stephenie Meyer’s official website, and you can pre-order the book here.

Meyer has published a few Twilight Saga spinoffs over the years, including a novella following Bree Tanner, an official encyclopedia, and the gender-bent Twilight titled Life and Death. But Midnight Sun is the one fans have been excited most for.