Returning to the Shadowhunters once more, a new trilogy from Cassandra Clare plants readers in the middle of the more familiar generations of the Shadowhunters we’ve come to love in The Infernal Devices and the original series. In Edwardian London, we will meet up with Lucie and James Herondale as they find themselves reunited with their childhood friend, Cordelia Carstairs. The trio are flanked by descendants of a couple other recognizable surnames, but do not let that make you believe you’re in for any old tricks.

Chain of Gold will test the limits of the Shadowhunters as they uncover the dark secrets bestowed to them by their ancestors that may be the answer to saving the world from a new breed of seemingly unstoppable demons. But glory and freedom comes at a cost. Readers are in for another grand adventure with demons the likes of which we have never seen before.

Has it been a while since you ventured into the Shadowhunter world? Never fear. The Last Hours trilogy is accessible for readers both old and new.

Chain of Gold, hits shelves March 3, 2020, but we have an exclusive excerpt to tide you over until then! Check it out below and preorder your copy today.

Read an exclusive excerpt from ‘Chain of Gold’ now

Cordelia couldn’t understand why she was so worried about Lucie. Several withdrawing rooms had been opened up, and Lucie could have wandered off to any of those, or returned to her own bedroom. She could really be anywhere in the Institute. Matthew had told her not to worry before he’d hurried off somewhere, but Cordelia couldn’t shake her sense of unease.

“For pity’s sake!” someone called, interrupting her thoughts. It was a man’s voice, low and baritone. “Someone come help her!”

Cordelia glanced about: everyone seemed to be looking surprised and chattering to each other. In the distance she could see a loose circle of people standing around whatever was going on. She picked up her skirts and began to push her way through the crowd.

She could feel her hair coming out of its carefully arranged curls and spilling down over her shoulders. Her mother would be furious, but really. Why didn’t people move? They were Shadowhunters. What on earth were they doing standing around like sticks while someone was in distress?

She wriggled through a small knot of onlookers and there, on the floor, was a young man holding Barbara Lightwood’s limp body in his arms. Oliver Hayward, Cordelia realized. Barbara’s suitor. “We were dancing,” he was saying, looking bewildered, “and she just collapsed—”

Cordelia dropped to her knees. Barbara Lightwood was ghastly white, her hair dark with sweat at her temples. She was breathing in short, erratic bursts. In times like this, all shyness deserted Cordelia: she could only think of what to do next. “She needs air,” she said. “Her corset is probably tormenting her. Has anyone a knife?”

Anna Lightwood pushed through the crowd and moved forward, kneeling down opposite Cordelia with fluid grace. “I have a dagger,” she said, drawing a sheathed blade from her waistcoat. “What needs to be done?”

“We need to cut her corset off,” Cordelia said. “She has had a shock, and she needs to breathe.”

“You might leave that to me,” said Anna. She had an extraordinary husky voice, honey and sandpaper. She reached to lift Barbara out of Oliver’s lap, then ran the dagger down the back of her dress, delicately separating the fabric and then the thicker material of the corset underneath. As it sagged free of Barbara’s body, Anna glanced up and said absently, “Ari—your wrapper—”

Ariadne Bridgestock swiftly drew her silk wrapper from her shoulders and handed it to Anna, who swaddled Barbara in it to keep her decent. Barbara was already beginning to breathe more regularly, the color in her cheeks returning. Anna looked at Cordelia over Barbara’s head, a considering look in her blue eyes.

“What on earth?” Sophie Lightwood had made her way through the circle of onlookers, her husband, Gideon, just behind her. “Barbara!” She turned to Oliver, who stood nearby, looking utterly distressed. “Did she fall?”

“She just collapsed,” repeated Oliver. “We were dancing, and she fainted—”

Barbara’s eyelids fluttered. She sat up in her cousin’s arms, blinking up at her mother. Her cheeks flushed bright red. “I’m—I’m all right,” she said. “I’m all right now. I had a spell, a silly dizzy spell.”

Cordelia rose to her feet as more guests joined the loose circle of bystanders surrounding Barbara. Gideon and Sophie helped their daughter to her feet, and Thomas, appearing from the crowd, offered his sister a worn-looking handkerchief. She took it with a wobbly smile and dabbed at her lip.
It came away stained with blood.

Cordelia hadn’t realized James was there. She turned and saw him standing just behind her.

The sight of him startled her. Years ago, he’d had the scalding fever: she was reminded of the way he’d looked then, pale and sick. “My stele,” he said roughly. “Inside my breast pocket. Barbara needs a healing rune.”

For a moment Cordelia wondered why he couldn’t fetch it himself, but his hands were clenched at his sides, hard as stones. She reached out and fumbled nervously at his chest. Silk and cloth under her hand, and the beat of his heart. She seized hold of the slim, penshaped object in his pocket and held it out to Thomas, who took it with a look of surprised thanks. She hadn’t really looked at Thomas before—he had bright hazel eyes, like his mother’s, framed by thick brown lashes.

“James.” Lucie had slipped between James and Cordelia and was tugging at her brother’s sleeve. “Jamie. Did you—”

Lucie looked worried. The three of them watched in a silent group as Thomas finished the healing rune on his sister’s arm, and Barbara exclaimed again that she was just fine and had only had a dizzy spell. “I forgot to eat today,” she said to her mother, as Sophie put her arm around her. “That’s all it is.”

“Nevertheless, we had better get you home,” Sophie said, glancing around. “Will—can you have the carriage brought around?”

The crowd had begun to scatter; clearly there was nothing more of interest to see here. The Lightwood family were headed to the door, Barbara on Thomas’s arm, when they paused. A pigeonchested man with a black handlebar mustache had rushed up to Gideon and was speaking to him excitedly.

“What’s the Inquisitor saying to Uncle Gideon?” Lucie asked curiously. James and Matthew only shook their heads. After a few moments, Gideon nodded and followed the man—the Inquisitor, Cordelia supposed—to where Charles stood speaking to Grace Blackthorn. Her face was turned up to his, her eyes bright and interested. Cordelia remembered all the lessons her mother had given her in how to appear interested in conversation at social events: Grace seemed to have already absorbed them all after only being in society for a short time.

Charles turned reluctantly away from Grace and fell into discussion with Gideon Lightwood. The Inquisitor was moving through the crowd, stopping to speak to several Shadowhunters as he went. Most seemed to be about Charles’s age: Cordelia guessed he was somewhere in his twenties.

“Looks like the party’s over,” said Alastair, appearing out of the crowd holding a cigar. He was gesturing with it, though Cordelia knew that if he ever started puffing tobacco, Sona would murder him. “Apparently there was a Shax demon attack in Seven Dials.” 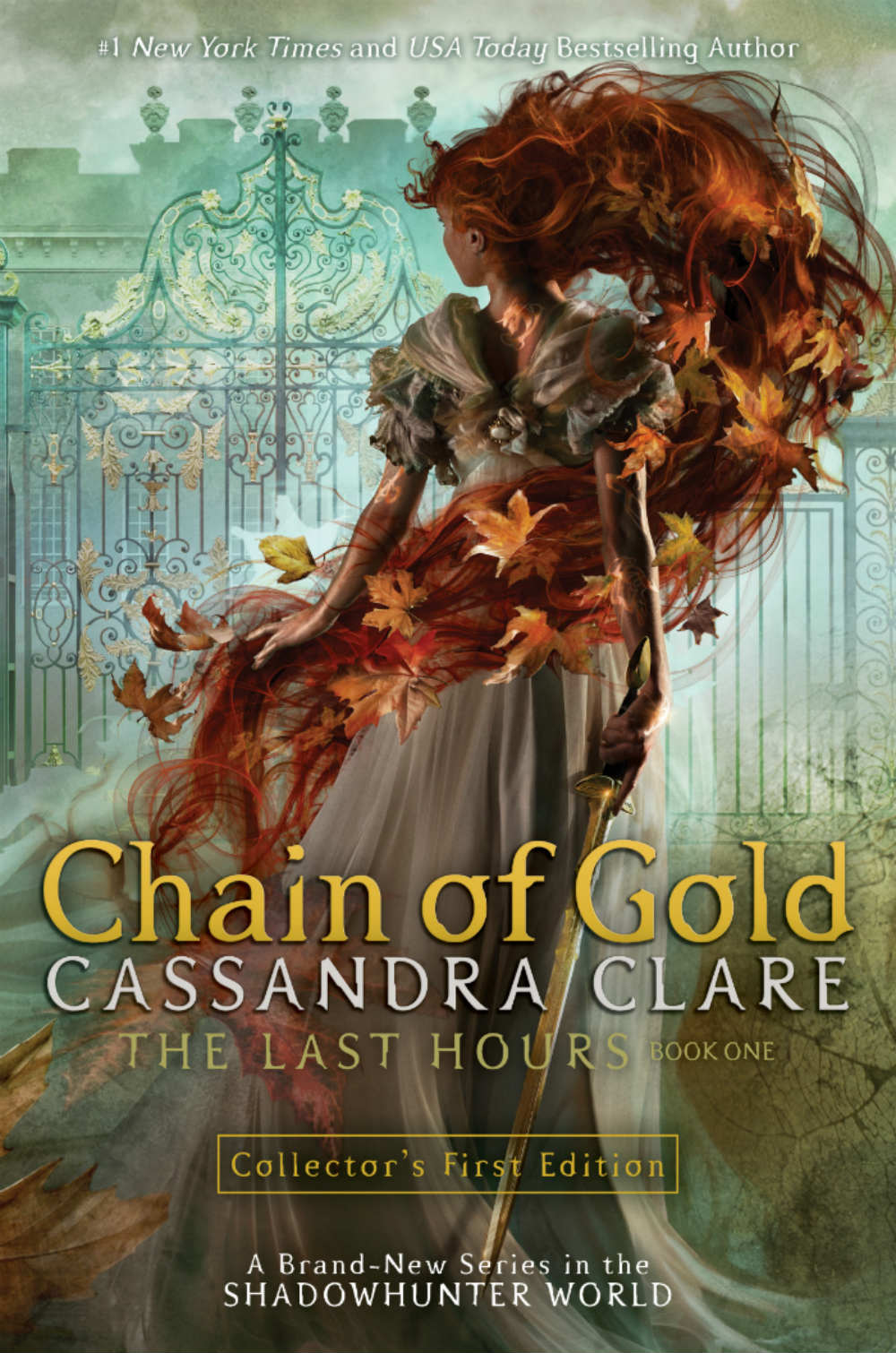 About ‘Chain of Gold’ by Cassandra Clare

Cordelia Carstairs is a Shadowhunter, a warrior trained since childhood to battle demons. When her father is accused of a terrible crime, she and her brother travel to London in hopes of preventing the family’s ruin. Cordelia’s mother wants to marry her off, but Cordelia is determined to be a hero rather than a bride. Soon Cordelia encounters childhood friends James and Lucie Herondale and is drawn into their world of glittering ballrooms, secret assignments, and supernatural salons, where vampires and warlocks mingle with mermaids and magicians. All the while, she must hide her secret love for James, who is sworn to marry someone else.

But Cordelia’s new life is blown apart when a shocking series of demon attacks devastate London. These monsters are nothing like those Shadowhunters have fought before — these demons walk in daylight, strike down the unwary with incurable poison, and seem impossible to kill. London is immediately quarantined. Trapped in the city, Cordelia and her friends discover that their own connection to dark legacy has gifted them with incredible powers — and forced a brutal choice that will reveal the true cruel price of being a hero.

Chain of Gold by Cassandra Clare will be available on March 3, 2020. You can preorder your copy now from Amazon, Barnes & Noble, The Book Depository, or Indiebound. Also, don’t forget to add it to your Goodreads “to read” shelf!